(left, Hankey's updated documentary)
John Hankey deserves credit for
reminding us that
Donald J. Trump is a shyster
and US politics is a charade.
(Don't have an hour? See this four-minute trailer.)
by Henry Makow Ph.D.
As America heads for the midterm elections, the country has never been so polarized. Trump is considered a national savior by his supporters, a monster by his detractors. Democrats are threatening violent resistance if they don't regain power.
After watching John Hankey's hour-long documentary "Is Trump for Real?" you would be forgiven for thinking the whole thing is a charade
and we are being duped. 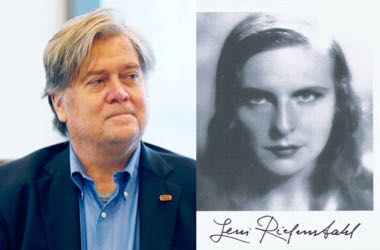 (left, Bannon studied Nazi propagandist Leni Riefenstahl)
John Hankey explains that the Republican "big dogs" wanted Jeb Bush but after 9-11, the American people would not stand for it. Steve Bannon went to work for Ted Cruz crafting a campaign designed to tell people what they wanted to hear, based on Hitler's electoral strategy, and an analysis of Facebook data by Cambridge Analytica. Bannon eventually took his program to Trump.
After a 20-minute introduction, Hankey's documentary devotes 40 minutes to about a dozen footnotes. In one of these, Hankey provides an interview with Christopher Wylie, research director for Cambridge Analytica where he says they developed slogans like "Build the Wall," "Drain the Swamp," "Rebuild Roads and Bridges," and "Fake News" for Cruz which Trump adopted.
Hankey shows how Trump has exploited the fear of Islamic terror and catered to the War industry, all the while decrying the waste of trillions on the Iraq war. Trump characterized Islam, one of the great religions of the world as "a hateful foreign ideology" and banned Muslims from select countries from coming to the US.
He vowed to eradicate ISIS knowing all along they were a creation of Mossad and the CIA. He suggested Saudi Arabia was complicit in 9-11 and then made deals with them, and excluded them from his travel ban. Rudolph Giuliani who was Mayor of NYC on 9-11, and part of the cover-up, is Trump's personal lawyer. 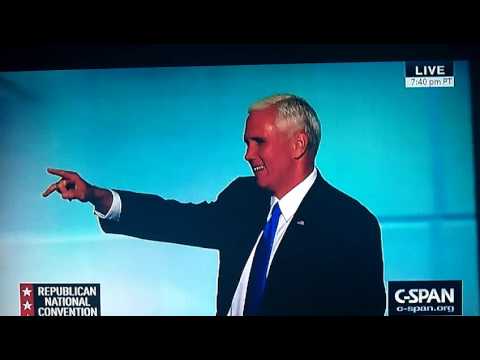 (Pence is a satanist Freemason, not a real Christian. Here he makes Sign of Baphomet.)
Hankey believes Trump's choice of Mike Pence for VP is telling. Pence was instrumental in helping develop a rationale for Bush's attack on Iraq. (Perhaps Hankey devotes too much time to this.) Pence is a fanatical Christian Zionist and NeoCon, not the man you would choose if you were charting a new course. He is the man you'd choose if your real agenda is Albert Pike's Third World War, Zionism Versus Islam.  This may explain why Trump broke his promise to defuse tensions with Russia. They support Islam.
KAVANAUGH
I regard Trump as the lesser of two evils but I am mindful that the whole political process is a sham. Take the Kavanaugh circus for example. Did the Democrats seriously think they could derail this nomination based on Christine Ford's recollection of being dry-humped at a frat party three decades ago? Or was it just a charade to further polarize the country and inflame tensions? Is Trump Derangement Syndrome in the media part of this charade? 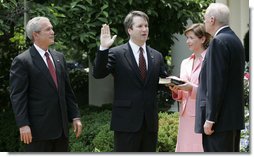 (l. Bush attended Kavanaugh swearing in for DC Court of Appeals in 2006)
Consider that Kavanaugh was a Bush factotum who apparently wrote the Patriot Act depriving Americans of their civil rights. Consider that his wife was George W Bush's personal secretary. He also served Hillary, covering up the Vince Foster murder.
What good are Trump's domestic policies if his foreign policy gets Americans irradiated? The American people are being had. Vote but otherwise, just switch it off.
Trump is the most effective demagogue in the history of the US. But he is a shyster and Hankey deserves credit for reminding us.
The main shortcoming of this video is that it doesn't go into Trump's Chabad Jewish and Masonic Jewish background. Hankey often digresses and loses focus by rehashing his previous videos.
Also, in his discussion of Orlando, Hankey seems oblivious to the fact that the promotion of "gay rights" is really about undermining the identity of 98% of the population, heterosexuals.
Trump may represent a reprieve from George Soros' Communism but Hankey shows that the real business of America, war, has not changed.
-------
First Comment from James C
Trump's war with the media is as real as t.v. wrestling.  It's an elaborate charade designed to convince the American public that Trump is anti-Establishment when in reality he is totally in bed with the Zionists who own and control the media.  Where's the proof?  Watch the following youtube video and look at the incredible list of Zionists, Neocons and Jews backing this hypocrite.  Or read the attached PDF transcript of the video.  "The bottom line is: You cannot be anti-Establishment, anti-Globalist are be pro-Zionist, pro-Israel. This is the real truth, and until we see otherwise, nothing will ever change."
Trump IS the Swamp?! - Trump's Jewish Elite MAFIA and The 5 Dancing Israelis! 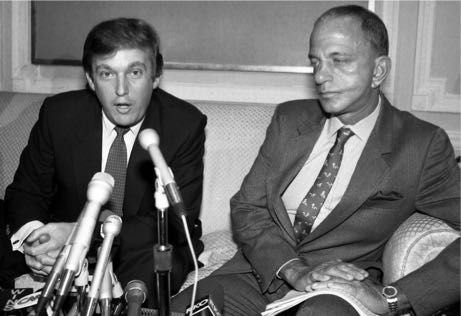 (left, Trump was tutored by gangster lawyer Roy Cohn, a Jewish homosexual who died of AIDS in 1986)
FROM PETER
A major player in all this is Roy Cohn, Trump's mentor and lawyer of 13 years,  and Joseph McCarthy's Jewish right-hand man. https://www.vanityfair.com/news/2017/06/donald-trump-roy-cohn-relationship
"Donald calls me 15 to 20 times a day," Roy Cohn told me on the day we met. "He is always asking, 'What is the status of this . . . and that?' "It was 1980"
"For author Sam Roberts, the essence of Cohn's influence on Trump was the triad: "Roy was a master of situational immorality . . . . He worked with a three-dimensional strategy, which was: 1. Never settle, never surrender. 2. Counter-attack, counter-sue immediately. 3. No matter what happens, no matter how deep into the muck you get, claim victory and never admit defeat." As columnist Liz Smith once observed, "Donald lost his moral compass when he made an alliance with Roy Cohn."
... " Sometime during the 2016 presidential campaign, Brill [Journalist Lawyer] noticed that Donald Trump was using Cohn's exact phrases. "I began to hear, 'If you want to know the truth,' and 'that I can tell you . . .' and 'to be absolutely frank'--a sign that the Big Lie was coming, [Goebells?]"
Cohn's father was a Supreme Court Judge.

Regarding JG's comment that Bush Jr is pro Israel. Yes he initially was in his first term. I know for a fact that the elder Bush never liked Israel. See Barry Chamish's articles which are found online. Bush Jr. turned on Israel with "Land for Peace" in his second term. A loyal son.

I expect Trump to do the same to Israel in his second term. Provided he wins re-election against Hilary. Israel is planned to return to the pre-1967 border. I notice that recently that Palestinians made a claim to West Jerusalem (saw it on the Hal Lindsey report for this week). It was always East Jerusalem for them. Why now? The Globalist network might be pulling strings to start up a controversy in the future.

Jerusalem is designated to be a city-state with a world religion. Palestinians and Israel will have no claim to it.

As always, a good article. American politics over the past 30 years or so or more, has become a freak sideshow and a con job regardless of the political party put in office. I'll put it in more retrospective terms: Politicians, regardless of their political stripe are like the carnies/carnival hucksters of old. They roll into town, pitch their tents, fleece the local yokels with their games of chance. Beguile them with their freak sideshows, and then pull up stakes and roll onto the next town.

I remember when Trump threw his hat into the presidential running ring so to speak. I remember telling my family and friends that he is a trojan horse. The push back I got was the usual "he'll make America great again".

Well, here we are in the present tense and well....he has broken every campaign promise he made. Of course, those who have eyes to see and ears to hear with know that the past 30 years, not one campaign promise has ever been fulfilled by any candidate...period. I know there will be the usual Trumper Stumpers who come out of the woodwork and disagree with me, but oh well; the truth is the truth.

He kept his promises to Israel.

What's refreshing about the Trump presidency is the real CHANGE he has brought to the table that was suppose to happen under the Obama presidency but never did.
Like him or not more people are back to work, "free trade" is being replaced with "fair trade", and peace treaties have been formed (North Korea) without bombs being dropped.
If the MSM media is always on his back it's because he's doing his job and NOT carrying out their Liberal/Marxist agenda.
No comparison can be made between Trump and Bush Jr.
One has shown much courage where the other one showed little courage. One was manipulated into political positions under MSM pressure while the other one has dismissed the MSM.

Yes, both Trump and Bush Jr. are Republicans who support Israel but beyond that, they didn't have much in common. President Trump is trying to end wars in the Middle East where Bush Jr. had expanded them.

If the Trump Presidency has just been another Zio/Neo Con sham there would be peace in Washington and you would not have the radical division that exists there today.

The article reminds me of Douglas Reed and his statement that communism and Zionism is a pincer movement that threatens humanity. I agree that Trump is a grace period for George Soros communism. Trump gives us time
to breathe, no more and no less. The question that remains is, what comes after Trump?