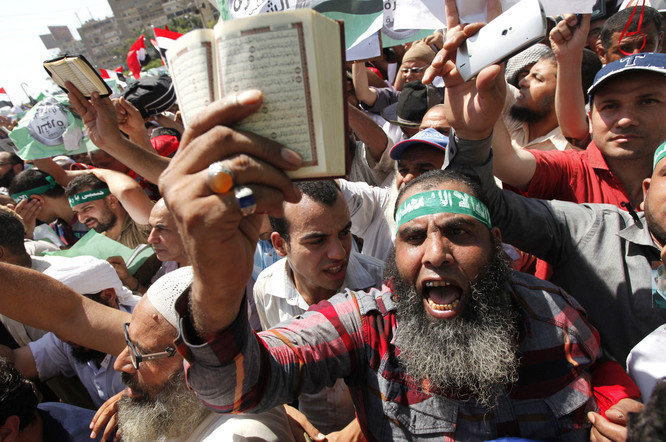 is at the vanguard of the Rothschild's conquest of the world.

Below, Anders Bruun Laursen explains that they are behind the "Arab Spring," as well as Muslim terror and migration. Khashoggi was a MB kingpin. All those who decry his murder are also Muslim Brothers like

Erdogan or high-level Freemasons. The reaction to his murder is

a reflection of the importance of the MB to the Rothschild's NWO.

In your 23 Oct. 2018 post you invite to bring more information on the Muslim Brotherhood.

I have some information here. 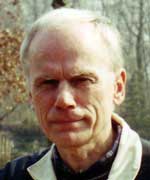 The Middle East Quarterly Winter 2005, pp. 25-34  By Lorenzo Vidino, deputy director at the Investigative Project, a Washington D.C.-based counterterrorism research institute: "The Muslim Brotherhood's ultimate goal is rather to extend Islamic law throughout Europe and the United States".

As you write, this organization is a Masonic one, founded by British agent and Mason  Hassan al-Banna in 1929 - later working for the British, later German intelligence services and then the US CIA. The Rothschilds used the Brotherhood in a futile attempt on Egyptian Pres. Nasser. 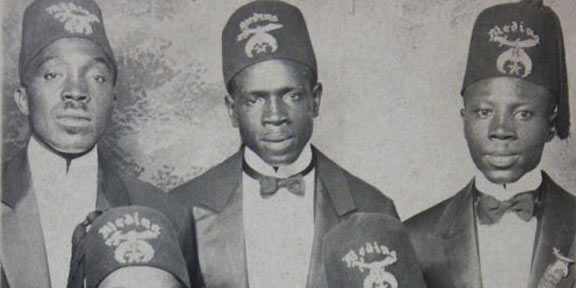 The Muslim Brotherhood has a plan for the conquest of the West,  found in Muslim Brother and Banker Nada´s villa in Lugano - more here.

All Muslim terror groups are members of the Muslim Brotherhood

The Brotherhood´s policy is indeed to fulfill the Koran demands to Islamize the world (e.g. Sura 33:27) - however by subversion and political deals instead of violent jihad - as they have succeeded to do both in Europe: See the Lugano plan above and in the US. This is a very detailed program - and it was never published by the media.

The EU inevitably knows this plan - and continues to pump Muslims into Europe as foreseen in the plan in cooperation with the Muslim Brotherhood:

Muslim Brotherhood/Hamas Lobby Group Meets With EU Commissioner. It is the de facto voice of the Muslim youth in Europe. It is regularly consulted on issues pertaining to Muslims in Europe. It has also developed useful links with: the European Parliament, the Council of Europe, the United Nations, the European Youth Forum, and numerous relevant NGOs at the European level.
A post from earlier this month reported that the CEPR was hosting a European parliamentary delegation which would attempt to visit Palestinian hunger strikers in Israeli prisons. 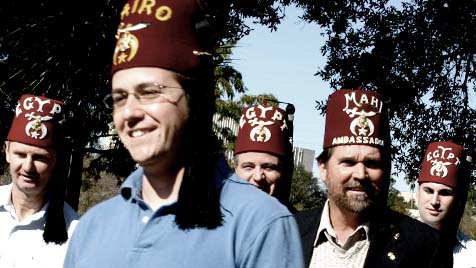 And Obama´s brother Malik is a Member of the Muslim Brotherhood - and many suspect Obama of being too, since he supported the Brotherhood with 8 Mio. dollars in its fight in

The Euro-Islam is to pull the wool over the eyes of gullible Europeans: The wording is a little more peaceable - but in reality it is much more dangerous than original Islamic preaching: It conceals that all peaceable Koran sure have been abrogated by the central sword  Prof Tibi says the same things as   PJ Media by Walid Shoebat & Ben Barrack 18 Febr. 2012:  traditional Islam, only in an edible way for gullible Europeans.

Al Ahram Weekly 25-31 Aug. 2016: The Muslim Brotherhood used its institutional presence in these three countries: The UK, France, and Germany in order to build a network of alliances with entities representing the world's major Islamic blocs.

The Brotherhood presence in these three major European countries also let it expand institutionally into smaller countries in their orbit, such as Belgium from France, Ireland from Britain, and Switzerland from Germany.

An umbrella group, the Federation of Islamic Organisations in Europe, was formed as the façade of the international Muslim Brotherhood and as a way of gathering all the Brotherhood associations and Islamist groups in Europe, including more than 500 organizations inside and outside the EU states and unofficial entities working within this framework.

There is also now an unofficial parallel network of Muslim Brotherhood . These people run smaller associations that operate outside the Brotherhood's religious and preaching framework, with the goal of making Europeans more sympathetic to Brotherhood ideas by marketing them in a secular package that defends democracy and human rights. These associations include Brotherhood media entities in the UK working in education, culture, and youth issues and focus on the integration of Muslims in Europe. 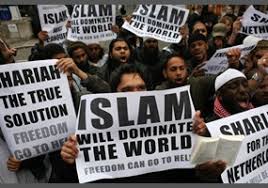 The Islamic Cultural Centre in Geneva itself was established with Gulf funding in 1961 by Said Ramadan, son-in-law of Muslim Brotherhood founder Hassan Al-Banna.

Germany, France and the UK: The Brotherhood spread through Germany from the Munich Mosque, and it relied on three primary tools: the Central Council of Muslims in Germany, the IGD, the voice of German Muslims that control some 60 Islamic centres across the country and is led by Egyptian Brotherhood figure Ibrahim Al-Zayat, the son-in-law of Sabri Erbakan, the leader of Milli Gorus, and Milli Gorus itself, which controls large segments of the Turkish community in Germany.

Milli Gorus's Islamist ideology is a Turkish-inflected version of Political Islam, and it has close ties with Turkish president Recep Tayyip Erdogan.

In France, the Federation of Islamic Organisations has been able to bring in more than 250 mosques and Islamic associations under its umbrella using North African Brotherhood cadres, particularly Tunisians, in order to do so, giving it the upper hand in the Representative Assembly of French Muslims in successive elections.

In the UK, in 1997 Arab Muslim Brotherhood affiliates founded the Muslim Association of Britain in the UK. The Islamist ideologue Youssef Al-Qaradawi's 1990 book The Priorities for the Islamic Movements in the Coming Phase has functioned as a kind of constitution for Brotherhood movements in the West since the early 1990s.

Al-Qaradawi calls for abandoning violence and the use of preaching, dialogue, and other peaceful means to forge a middle way between extremism and secularism. The most important part of the book is his discussion of Muslims in the West, the expected increase in the Muslim population  and the dangers of the Muslim minority's assimilation in these western societies. In the light of this, Al-Qaradawi has promoted the idea of a separate community of western Muslims, which he has termed the "Muslim ghetto" (No-go-zones - a goal co-inciding with the Masonic goal).

In 1989, the Brotherhood established the nucleus for its horizontal expansion on the European continent by establishing the Federation of Islamic Organisations in Europe, which took the UK as its temporary headquarters. The Federation is the forward face of all Brotherhood and Brotherhood-sympathizing organisations, entities, and associations across Europe. Functioning as the diplomatic representative of the Brotherhood, it employs a political discourse that focuses on democracy and human rights (TAQIJA).

As it increased the number of organizations under its umbrella, the Federation of Islamic Organisations in Europe moved its headquarters to Brussels in 1997 to be close to the EU institutions. This has made it easier to find European funding for the associations' activities.

The federation is extremely active, and although its headquarters are in Brussels it has branches in Norway, Sweden, Belgium, and the UK that administer youth, educational, and media portfolios.
It has also adopted a strategy of expanding outside the borders of the EU. In addition to associations operating in 18 EU member states, the federation has opened branches in nine other non-EU states: Albania, Bosnia, Kosovo, Macedonia, Moldova, Russia, Switzerland, Turkey, and Ukraine.

I have much more on the Muslim Brotherhood´s conquest of Europe here - i.a. these Muslim  Brothers  in Munich:

And this: Ghaleb Himmat, a Syrian with Italian citizenship, took the helm of the IGB. He is one of the founders of the Bank al-Taqwa, a powerful conglomerate dubbed by Italian intelligence, "Bank of the Muslim Brotherhood," which has financed terrorist groups since the mid-1990s if not earlier.

That Masons are tightly linked to Islam is no wonder. The Talmudist Rothschilds are also Sabbataean-Frankist satanists, as you have pointed out time and again. Both Sabbatai Zvi and Jacob Frank converted to Islam which is, therefore, an integral part of The Rothschild Religion (as is Jewish-founded Antichristian Jesuitism). And the  Illuminati (Adam Weishaupt and Mayer Amschel Rothschild) took command over the Masonic lodges of the world at the Wilhelmsbad Conference 1781

And they will say we "need to have a discussion" but any politician who so much as hints at defending a Western nation against a contrived Muslim onslaught (or any other cannon fodder of the NWO) gets pilloried, even by those minor parties that pretend to be Nationalist or Independent.

" At the time, KAP leader Bob Katter strongly supported Senator Anning's speech, describing it as "solid gold". But on Thursday, Mr Katter said the party's executive decided only "99 per cent" of it was solid gold, and that the rest was "totally unacceptable"." "

The offending speech in full - https://aupolnews.com/senator-fraser-annings-maiden-speech/

A good thing he has not mentioned the most racist state in the world, wonderful Israel. That would be the .001% that is totally Vorbotten to have a discussion about. I wonder if Christianity had not been invented and used so by the Jews to take over the West (as it seems to me at this stage) , whether we would not be so encumbered by this virginal good guy syndrome so badly that we might as well slit our own throats here and now and save the useful tools the effort later. Mind you, he would cut off my welfare tomorrow and have me slitting my own throat and have the non disabled unemployed, like kangaroos in a drought, culled.

Do you want to convince your readers that Khashoggi was a member of the Muslim Brotherhood, and the good allies of the US "Saudi Royal family" since WWII killed a member of the "powerful faction in the global oligarchy"?!!!

Also, you said that "The Muslim Brotherhood has been used to check nationalist movements led by such figures as Nasser, Bhutto and the Shah of Iran who tried to develop their countries." I will give you an example about Nasser who was an American puppet installed by the CIA and took Egypt back to the stone age. Everything went backward during his 18-year reign, he took his country into three devastating wars and did not win any of them.