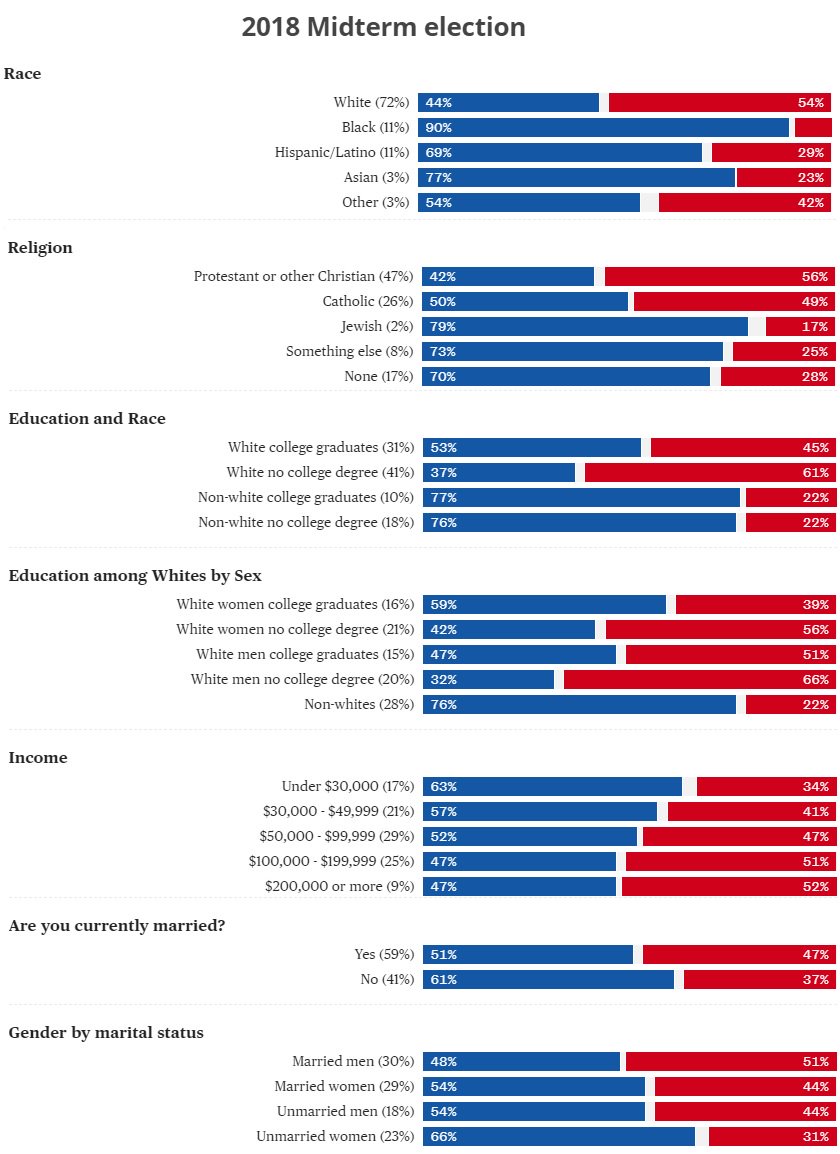 By Henry Makow Ph.D.
The midterm results last week can be understood by the following quote from yours truly:
"Organized Jewry is a corrosive acid that seeps into the fissures of society (class, gender, race) to undermine it in the name of "social change." Despite this moral posture, there is no genuine desire to empower the goyim. See communism, feminism, migration, homosexuality in this light."
See The Aim of Freemasonry is Triumph of Communism
The Democratic Party and most of the mainstream media are instruments of organized Jewry and Freemasonry which in turn are instruments of the Rothschild world central banking cartel.
They appeal to a coalition of "disgruntled minorities" --anyone with a grievance-- to gain power.
According to the graph above, this coalition consists of non-whites, non-Christians, Jews, unmarried women and brainwashed college grads, anyone but the founding peoples of the West. (Of course, there are minorities within the minorities who supported the GOP.)
The liberal (communist) modus operandi is to gain power by pretending to champion "underdogs." The real goal is to gain power and loot the treasury. Compare them to a plague of locusts.
The Democrats have done nothing but obstruct Trump rather than cooperate on beneficial programs because gaining the perks of power is their real program. Communists, they will do anything to win: Give felons the right to vote, stuff the ballot boxes, physically intimate and slander their opponents by making false sex charges. They need to be stopped by force of law. They need to be prosecuted or otherwise stopped.
Meanwhile, the shrinking white "majority" is not allowed to have an identity, let alone protect it.
The media is fixated on minorities. Anyone who advances majority interests is pilloried as "racist."
BANKING
Every day billions of monetary transactions take place. We imagine that "money" changes hands but in fact all that changes are digits on a giant ledger kept by the Rothschilds and their bank franchisees. (See Banking System Explains Our Servitude)
Money is a social construct, a mental abstraction which powers society like the electrical power grid. It magically shape shifts changing from commodities to services to coupons ("cash") to its digital form in a matter of seconds. It is based on an imaginary debt every nation owes the Rothschilds for this "money" they created out thin air.
Money also has a kind of occult power. Most of our energy and thought is devoted to acquiring it whether we need it or not. It has cast a spell over us. We are puppets on a $tring.
To switch analogies, think of money as the bloodstream of humanity. We are doomed as long as our "blood supply" is contaminated, i.e. as long as the satanist central banking cartel is the equivalent of the heart.
However since most people in power are there because they support this arrangement, it is unlikely to change. The fact that all corporations promote homosexuality and miscegenation indicates the bankers control them all. We live in a veiled Communist regime.
In order to retain their monopoly over "credit," (all money is, hence the "credit" card) the Rothschilds must extend this monopoly to everything ( power, thought, culture) using Organized Jewry and Freemasonry as their instruments. Eventually they will cut off "credit" to truth tellers, much as they are cutting free speech on the Internet today.
In order to retain their monopoly over credit, they have to enslave humanity. They do this by controlling both "Left" (Communism) and "Right" (Zionism)--both sides of the political spectrum, both Jewish. Thus Trump seems to oppose globalism but advances it by preparing Albert Pike's predicted Third World War which will depopulate the planet and usher in a global police state.
Why are they taking such pains to reengineer society sexually and racially if they plan to destroy it? Perhaps war is Plan B.
IMMIGRATION
Legal immigration is healthy. Illegal migration is not. Our country is our home and migrants have no more rights than home invaders. Migration is promoted by Communists to add to their coalition of grievers.
Nations have distinct cultures which they have a right to protect by selecting who is allowed to enter. This was always been taken for granted until globalists took over.
The harsh reality is that the people of European ancestry have forfeited their birthright by allowing Freemasons and Jewish traitors to take control of all social institutions. Under Zionist auspices, they are fighting back in places like the US, Russia, Italy, Hungary, Brazil and Poland.
We need step up our game, to call out our political leaders and media as traitors, and win elections. Media cartels need to be broken up. Universities need to be cleansed. It is the Eleventh Hour.
I realize that this seems a contradiction if the bankers also control the Right, but what option do we have? There is a difference.
----------
Related - Bella Dodd- The NWO is Communism

Comments for "Democrats - A Communist Coalition of Disgruntled Minorities"

As distasteful and ridiculous as it sounds (even to those who are NOT politically correct...) The answer (no matter how improbable, or actually impossible, to implement)...As proven by the graphs you showed...is to go back to the beginning...To the rules and system the founding fathers set up.

Only white males who were property owner were allowed the privilege to vote. Imagine if you could wave a magic wand and instantly go back to that system. Obama would never even have been on the ballot. Most of the political corruption would disappear. Law and order and common sense would be restored. Our borders would be secured and the immigration system would be changed to a merit system. There would very soon be no gang activity in the USA. Illegal drugs would all but vanish. The federal Reserve would be abolished, the debt we supposedly owe to the International bankers would be repudiated. The money we print would be debt free. We would make peace with Russia and China and the threat of nuclear holocaust would greatly diminish. etc. etc... To name only some positive effects.

The entire fabric of the USA could be slowly reverted back to 1956.

Even though know in your heart Henry that the system set up by our founders would still solve virtually all of our problems today...even incredibly brave Henry is not able to recommend such a totally comprehensive and common sense solution. I understand!!

Another detailed article of truth, but nothing new in today’s world of evil ,but let’s not forget that both party’s are controlled by the same evil ,the republicans are just as bad and even worse in many details the enemy’s of Christ control all of the news thru out the world they fuel the fire of hatred against each other and persons views

,they know exactly what there doing in simple terms mind control and your emotions ,but we lost we care about and are attached to the world the flesh and the devil ,not God at all we let these evil things happen and get worse so as society crashes we will suffer for it ,one quite from the mother of God Mary ( Soon the living will envy the dead ,has this not already been felt by some poor souls in this world already Yes it has )

All governments are controlled by Lucifer the prince of this world and will continue because we had no spiritual and moral courage to stop it last note print out how bad the republicans are .

Democrats in the states appeal to the completely ignorant, insane and those without any morality. Coming to the conclusion that some people hate wholesomeness to the point of endorsing and supporting these criminals is discouraging. I don’t subscribe to the left-right bandwagon; however, the Left are radical destroyers and their agenda is to make the transition into the new world order as injurious to the innocent as possible.

These people are the ones who eagerly brainwash children to accept an unhealthy mindset, desire young girls to end up as whores, remove the age of consent, remove the sanctity of marriage, uproot all racial integrity, destroy all nations and have us become deracinated masses ruled by a intellectually and racially pure Pharaoh class of Masonic elite.

It’s a war against innocence (children), and I hate them for it.

Just last night I was talking to a young teacher in her 20’s who attacked me for my faith in Christ. It was no skin off my shoulder, but the fact that these hostile radicals have children in their hands is very bad. But it was a bizarre attack, as if she expected to me to be attracted to her attitude and worship her like some Jezebel or caricature of Isis. Feminism is more than simply a political movement – I am convinced there is some demonic spirit behind it also.
She received no reply.

As for your question at the end of your article – the solution we have is for young men to deny this world, band together, adopt a Christian zeal and restore things. But unfortunately, ruggedness, courage, moral strength and understanding among young guys these days is in short supply, but I haven’t lost hope.

I hate to admit it but the "devil is having his day" with organized government in the once free world of the West. England, France, Canada, Germany, and the US have fallen victim to the atheist liberal social agenda from abortion, LGBT demoralization, and secular humanism. And, as planned the results have been disastrous for civilized mankind.

The only thing that is keeping America strong and blessed is the Church. The World Order Satanists know that as long as Christianity is alive and well their plans to defeat the human race as we know it will fail. This is why the Democrats in Washington radically oppose any Supreme Court candidate that is Christian.

America still has a large number of believers in Jesus Christ that the MSM will never recognize.

Once the 'Church Age' on Earth has been completed and all that can be saved have been saved, beware, the judgements that will follow will be like the world has never experienced before.The end of the 'Church Age' will spell disaster .