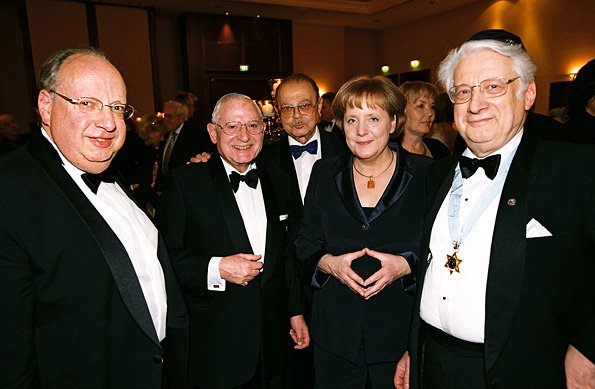 (Angela Merkel gets Bnai Brith Award in 2007; Germany joins UN Migration Pact)
"It remains a fact," says the Jewish Encyclopedia, "that the Jews, either directly or through their co-religionists in Africa, encouraged the Mohammedans to conquer Spain." [in 709] ..."Wherever they went, the Jews threw open to them the gates of the principal cities, so that in an incredibly short time the Africans were masters of all Spain save the little kingdom of the Asturias in the northern mountains, where the Christian survivors who were unwilling to accept Islam reassembled and prepared to win back their heritage."
Muslim migration is a Communist Jewish (Masonic, Satanist) attack on Christians, Christian nations and Christian Western Civilization
Disclaimer- Why do I, a Jew, publicize this info? Isn't it antisemitic? Quite the opposite. Many Jews like myself are not part of this age-old satanic agenda. We weren't told. We weren't asked. We are not going to take the blame for something we bitterly oppose. 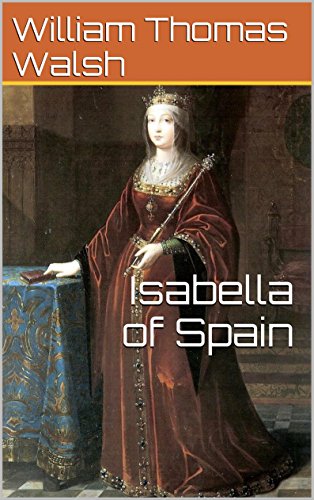 From the Forward to Isabella of Spain (1935)
by Willam Thomas Walsh
(Excerpt by henrymakow.com)
Meanwhile, the Mohammedans had long since driven a wedge into western Europe, by way of Spain. Of the three great peninsulas that Christendom had planted, like colossal feet, in the Mediterranean, they now possessed Greece and were preparing to assail Italy. But Spain had been their battleground for nearly eight hundred years.
Hardly had the Mohammedan Arabs subdued and organized the Berbers of North Africa when they were invited by the Spanish Jews to cross the nine-mile strip of water at Gibraltar and possess themselves of the Christian kingdom. The plot was discovered, and the Jews sternly punished. A second attempt, however, was successful at a moment when the Visigoth monarchy was perishing of its own follies. "It remains a fact," says the Jewish Encyclopedia, "that the Jews, either directly or through their co-religionists in Africa, encouraged the Mohammedans to conquer Spain." 2
In 709 the Arab general Tarik led an army of Berbers, in which there were many African Jews, across the straits. Defeating and slaying King Roderigo, with the aid of Christian traitors, at the great battle of Jerez de la Frontera, they carried death in all directions through the peninsula. Wherever they went, the Jews threw open to them the gates of the principal cities, so that in an incredibly short time the Africans were masters of all Spain save the little kingdom of the Asturias in the northern mountains, where the Christian survivors who were unwilling to accept Islam reassembled and prepared to win back their heritage. Meanwhile, the Berbers entered France along the Mediterranean coast. 8 The whole western culture of Rome was in jeopardy a second time, from the same enemy; for by a striking coincidence, it was the same Berber race that had followed Hannibal across the Alps into Italy nearly a thousand years before. The fate of all Christendom hung on the issue of a battle. 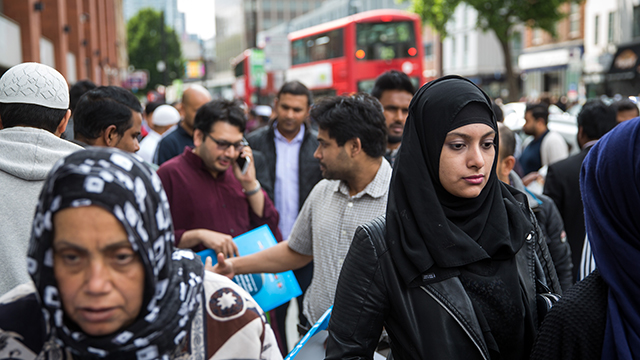 The glorious victory of Charles Martel in 732 saved our culture, but Spain remained lost to Christendom for centuries. Christian churches were turned into mosques, old Roman cities were gradually transformed into the oriental pleasure-grounds of the caliphs. Cordoba under the Ommiad, Abd er Rahman III, in the tenth century was more beautiful than Bagdad, and next to Constantinople the most magnificent city in Europe. Medicine, mathematics and philosophy were taught in its schools. At a time when the Christians to the north were fighting for the mere right to exist, the caliphs enjoyed an income greater than those of all the kings of Europe combined.
Slowly and painfully, but with hope born of their faith, the Christian knights fought their way south into the lands of their ancestors. With much expense of blood, they gradually carved out five small Christian states: Castile and Leon on the great central plateau; Navarre in the shadow of the Pyrenees; Aragon, originally a Frankish colony, in the north-east; and Catalonia -- a remnant of the old Spanish March -- on the eastern coast. Alfonso VI of Castile took Toledo in 1085 -- though the Saracens, reinforced by hordes of Almoravides from Africa, later defeated him. Alfonso Sanchez recovered Saragossa and the sacred site where Saint James the Apostle (Santiago) had built the first Christian church in Spain. Aragon and Catalonia united. Portugal became independent in 1143. And then, in 1160, the military failure of Alfonso VIII placed in peril all that had been gained.
At a critical moment the great voice of Pope Innocent III, summoning all Europe to join in the Spanish Crusade, prevented a second catastrophe. Ten thousand knights and 100,000 infantry came from France and Germany in time to reinforce the armies of Castile and Aragon. They vanquished the mighty Saracen host in the battle of Las Navas de Tolosa in 1212, crushed them utterly, left 200,000 of them dead on the field. It was the turning point of the age-long Crusade. In the following generation Fernando III, the Saint, recaptured Cordoba, Seville, Jerez and Cadiz. Luxuriant Andalusia, south of Castile, was regained. When the fifteenth century began, nothing was left to the Moors but the Kingdom of Granada in the extreme south. It was, however, the richest, most fertile, most delightful part of Spain, populous and warlike, sustained by abundant farmlands and pasturage, and protected from military attack by the enormous natural fortifications formed by the snowy peaks of the Sierra Nevada. The city of Granada and the score of almost impregnable towns that encircled it could put into the field a well-equipped army of 50,000. But even more menacing to the security of the Christian kingdoms was the fact that the Moors could obtain almost unlimited reinforcements and supplies from the Mohammedan millions of Africa, and at short notice. So long as Islam retained any foothold in Spain, there was the perpetual danger that the seven hundred years of heroic effort might yet be lost. 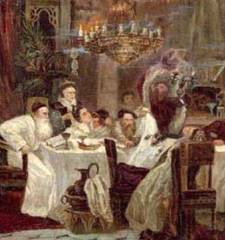 To prevent such a debacle, to complete the reconquest, Christian Spain had need of political unity under a strong leader. But the problem of unity was far more intricate than the one with which Louis XI was beginning to grapple in France. He, too, had an arrogant feudal nobility to suppress, anarchy to reduce to order, a bankrupt country to make productive. But he had an enormous advantage in the fact that his people were so nearly one in race and were one in religion. There was no such fundamental unity to build upon in Spain, where the Jews constituted a powerful minority resisting all efforts at assimilation. Of the openly professing Jews of the synagogue there were only some 200,000 in 1450, and they were allowed complete freedom of worship. But far more numerous were those Jews -- there must have been at least 2,000,000 of them -- who observed the rites and customs of the Old Law in secret, while outwardly they pretended to be Christians. They were called Conversos or New Christians. The Jews of the synagogue sometimes called them Marranos, from the Hebrew Maranatha, "the Lord is coming," in derision of their belief, or feigned belief, in the divinity of Jesus Christ.
The Conversos were assimilated in a superficial sense, for many of them married into the noblest families in Spain, enjoyed all the privileges of Christians, and had gradually gathered into their hands most of the wealth, the political power, and even the control of taxation; but it was generally felt that in a crisis they would prove to be Jews at heart, enemies of the Christian faith, and the allies, as in the past, of the half- oriental and circumcised Moors. How to fuse elements almost as immiscible as oil and water into a unity capable of resolving chaos into order and pushing back to the Mediterranean the western salient of the mighty battle-line of Islam -- that was the challenge that the times had hurled at Isabel's immediate ancestors and found them wanting. It was a task which, if at all possible, demanded constructive genius of the highest order. By some mysterious ordering of circumstance, by a falling out of events more romantic than fiction, it was committed to the hands of a woman.
--
First Comment from Marco A
Seven hundred years of war for the Reconquista. Does Europe have the stomach for that again - of course not?
The nobility and aristocracy that required the service of the European man to keep the hordes at bay has now stuck a knife into our backs, letting them all in.
The new world order won't be Islamic though; these Muslims are just a subversive element like the Joohs. They are the most materialistic people on the face of the Earth. I'm surrounded by these people on a daily basis - they all want the best haircuts, the latest iPhone, the trendiest clothes and a nice car. Importing them into a country is like importing decadence. They don't give a damn about anything important; they are selfish weak cowards like the typical Canadian.
But once the culture of the European has been totally destroyed and the white man is a memory, they will be next.
But it's not just Muslims, it's all foreign races. The village my family has lived for centuries now has Indian families living there instead of Italians. My uncle who is the last Italian there hired one to help on the farm and the man he hired sexually harassed my aunt. These invaders don't give a damn about Whitey or our women.
But Italy being a Masonic and Socialist state, my uncle couldn't even fire the man.
And being a fool he now hired more Indians because soft Italians don't want to work in shit and guess what? He has had to build the bastards houses by State policy! Meanwhile, my life is shit in Canada, and he wouldn't hire me, hahaha. Go figure eh.
----

Comments for " Muslim Invasion of Europe in Historical Perspective "

I can't say enough good things about your Walsh article on the Spanish Reconquista. Written one year before the Spanish Civil War broke out, he could not have seen how Generalissimo Francisco Franco rescued Spain once more. Churches really were being trashed, nuns and priests murdered, etc. by anti-Christian and anti-Spanish thugs. The young general had hardened his skills fighting Berbers in Africa, reversing Spanish defeats.

Smiling, calm and authoritative, he crushed the latest threat to Spanish civilization, just as the guerrillas over a century before had fought for Spain against the Church-hating French invaders of Napoleon. Franco had the good sense to keep Spain out of WWII, to the fury of Hitler, who felt owed for his assistance to Franco's forces in the Spanish Civil War. Franco allowed some Spanish volunteers to go to Russia, where most of them perished. But he saved Spain once more by his superb military skills and excellent political judgment. Viva Espana!

t has been well engineered by international Jewry - Muslims in the west will do their best to fight Christian hegemony. Apostate Jews are experts in creating schemes that will divide people, no matter who they are. Then they watch it all, hidden and laughing their bellies.

What we don't understand is that Jews use Islam to control populations including their governments, economies, educational institutions. For some reason, Christianity is harder to use as a form of control.
--

Genuine Christianity is. Christian Zionism is not