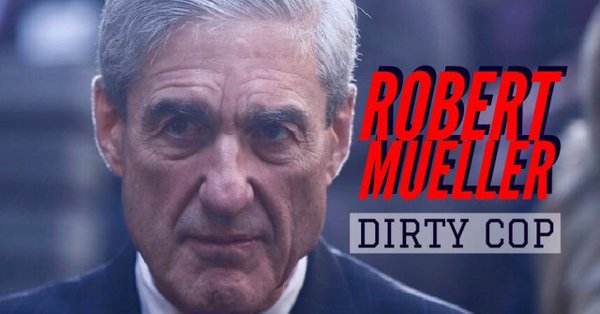 There may be a 'deal', with Mueller backing off of Trump, and Trump's people agreeing to not 'go nuclear' with the file that could send Robert Mueller to prison. In a simpler world, Robert Mueller would be forced to resign immediately, but the Deep State intel gang prefers something 'smoother' and 'less disturbing', though it is admitted Mueller is now damaged goods.
by Brabantian
(henrymakow.com)
Four weeks ago, on 25 October 2018, a file quietly arrived at the Office of US Department of Justice (DOJ) Inspector General Michael Horowitz, which has not only shaken the US Justice Dept to its core, but also became the great fall season gift to the lawyers for US President Trump and his associates, their 'trump card' against Special Counsel prosecutor Robert Mueller.
This 28-page explosive document was apparently one of the last documents read by US Attorney General Jeff Sessions before he resigned. Sessions was seemingly overwhelmed; the file part of his quick agreement to go out the door. Sessions commenting enigmatically afterwards that the 'Mueller investigation had gone on too long'. 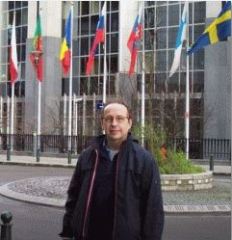 The DOJ filing, by Dr.Les Sachs, a former DOJ employee now under EU protection, is a devastating summary of international crimes implicating Mueller. It was immediately recognised as being very well-founded in DOJ's own files, and Trump's lawyers know this as well.
Lawyers for US President Trump and his son Don Trump Jr that have been able to benefit from this prize DOJ file, include Pat Cipollone, Jay Sekulow, Marc Kasowitz, Martin and Jane Riskin, and Alan Futerfas. Also, e.g., lawyers for longtime Trump friend and Mueller target Roger Stone, such as Bruce Rogow, Robert Buschel and Grant Smith.
The file, however, not only casts a dark cloud over Mueller, but over the entire US legal system. Both Mueller and another DOJ high official were involved in bribery with two US federal judges. They served a British-based criminal group that used Mueller's law firm to defrauded millions out of a Hillary donor  with Mueller getting a big share of the dosh after he left the FBI.
"Robert Mueller has received a share of foreign-origin and crime-generated funds, sourced in a British-based criminal group, which actively seeks to undermine, disable or remove the Trump-Sessions government; and how Mueller is in position to secure further millions by politically-biased devious actions serving his paymasters, who fear felony indictment under Trump-Sessions administration, Robert Mueller is quite unfit to continue in the role that he has. Robert Mueller should be preparing himself to face a grand jury, not calling others to one." 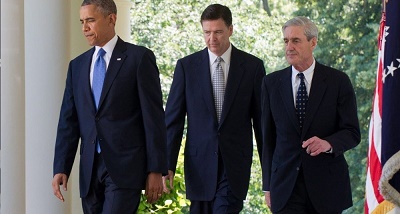 (Obama, Comey & Mueller. "Deal" in the offing?)
But because bribery of US federal judges and DOJ high officials is so unsettling a topic, DOJ and Trump's lawyers are handling the file very gingerly. Adding further pressure, the USA 'Deep State' intel agencies, are also implicated in the crimes tied to Mueller. These include participating in past cover-ups and planting false material on the internet, CIA-managed Wikipedia postings, smears of the author, etc.
The USA intel Deep State establishment is a factor in current interplay amongst Trump's lawyers, and Mueller and DOJ, with a Deep State 'push' to keep the DOJ filing under the radar.
It is suggested there may be a 'deal', with Mueller backing off of Trump, and Trump's people agreeing to not 'go nuclear' with the file that could send Robert Mueller to prison. In a simpler world, Robert Mueller would be forced to resign immediately, but the Deep State intel gang prefers something 'smoother' and 'less disturbing', though it is admitted Mueller is now damaged goods.
Apparently, due to Google manipulating search results, this article may be hidden, if certain names and details are in the text, such as the DOJ filing's author (whom I have met personally in European Commission precincts). Those who are interested can read the file at the link below for all details, names, who is said to have been bribed, how it was done, etc.
A notable aspect of the file, is that key media agitating against the President - NY Times, Boston Globe, CNN, UK Guardian etc - are said to be doing so, in part because these media outlets fear felony indictment in the schemes with Mueller, due to having taken bribes to create 'fake news.' They worked with Mueller's law firm to advance the Mueller-tied scheme. 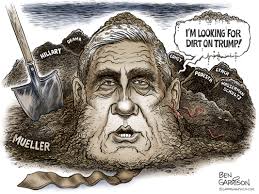 Also, as the file notes, extraditions to the USA are already being blocked because other countries are using files on the Mueller-tied crimes, which are somewhat hidden from the internet. Google's lawyers are named in the DOJ file as being actively involved to suppress information on these offences, despite past court filings etc.
Amusingly, 'Mueller has been helping Russia', given that Russia has also been able to quietly use the 'Mueller crime file' to stop extradition to the USA of Russian citizens.
Here is the 28-page DOJ filing:
'Report on evidence of felonies violating Civil Rights, and bribery by foreign agents, implicating United States Special Counsel Robert S Mueller III as a criminally-tainted agent of foreign & racketeering interests'
https://www.docdroid.net/eVAAjIq/doj-ig-memo-mueller-bribery-extortion.pdf
------------
Related -  Les Sachs - America's Corrupt Legal System
Sachs discusses his persecution by the US Gov't.
Don Bongino - Obama, Meuller & the Biggest Scam in US History
First Comment from JF
This article is a powerful momentum builder. Before reading it I had zero awareness of Les Sachs.
The 28-page linked document gives a clear graphic depiction of the level of morality the criminal gangs operate at.
Excellent data on the ACLU and Google's complicity.
I'm currently studying Les Sach's US legal system FAQ.  Even though written in about 2005, it seems to accurately capture the current realities of the US legal system.

Comments for "Report Implicates Robert Mueller in Crimes and Coverups "

I believe Trump knew about Mueller's compromised past before he was even appointed Special Counsel. Trump has that as leverage against. him. Inside word is that Mueller has a vendetta against Hillary Clinton because she blocked the release of a US spy in the Middle East and absconded with some of the ransom money in the process. Mueller reportedly gathering evidence against her and Podesta and word is that it will come out very shortly. Things should be very interesting from here on out.