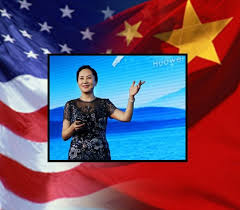 US companies also violated the US
boycott of Iran but their executives
were not arrested.  Neocon Jews are trying
to embarrass Trump and exacerbate
relations with China and Iran.
Trump says he is willing to intervene if it helps secure a trade deal. Meanwhile China may have detained a second Canadian in retaliation for Canada's arrest of Huawei executive Ms Meng Wanzhou, who has been granted bail but she had to put up $10 million and agreed to 24/7 surveillance.
Brabantian: "Within a couple of hours of your posting, Ron Unz published an article at the top of his site, with quite similar themes and data, 'Averting World Conflict: China Should Retaliate by Targeting Sheldon Adelson's Casinos' Would not be surprised if there is a public move by Adelson shortly.
by Brabantian
(henrymakow.com)
These last few days we have seen a masterfully-played hand by China, against the foolish decision of Canadian authorities to play along with a US neocon and 'Israel first' game against China.
Canada's arbitrary arrest of a leading Chinese citizen, Huawei executive Ms Meng Wanzhou, at the request of USA neocons acting behind the back of US President Trump, was an act of pure political malice, violating a number of principles of international law.
And clearly absurd, when no less than 25 other banks and institutions have been 'violating US sanctions' and admitted guilt via paying fines, but never suffered any executive arrests. As Columbia University Prof. Jeffrey Sachs has noted, these banks include JP Morgan Chase, Bank of America, PayPal, Toronto-Dominion Bank, and Wells Fargo. He says the US, not China
represents the biggest threat to rule of law. 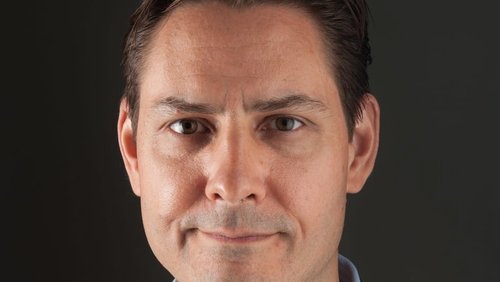 China swiftly followed the politically-motivated arrest, on charges threatening Ms Meng with 'multiple 30-year prison sentences', with its own swift arrest in China of former Canadian diplomat Michael Kovrig, working for a questionable NGO, the 'International Crisis Group', possibly indeed violating Chinese laws in its 'non-profit' work.
China in effect said, 'You want to play the 'strict application of law' game? Well, we can play that game, too!' Plus Chinese boycotts of Canadian goods, leading to Canadian stock share prices sinking ...
And all of a sudden a Canadian judge, at first hostile to this Chinese defendant, suddenly found 'good reasons' to release Ms Meng on bail ... 'independent judiciary' of course.
President Trump was reported to be furious after learning of Ms Meng's arrest, but still felt too weak to immediately order her release, against the neocon and Israel-firsters who seek conflict with China, plus to terrorize the world over Iran sanctions, and to humiliate Trump himself ... Trump though is now saying he 'may intervene', however, given the shifting winds...
Also in China's sights now over this affair, is the 20th richest person in the world, Jewish USA political kingmaker Sheldon Adelson, the political controller of the USA's Republican Party, Bibi Netanyahu's close friend, and, as China well understands, a major force behind the USA's anti-Iran policies, and the people who arranged the arrest of Huawei's Ms Meng Wanzhou
When Adelson decides on whom in the USA to support politically, or whom to destroy, he has two key questions - Will you support Israel? Will you support actions against Iran?
Iran, though a brutal country of stonings, floggings, and slow-torture hangings, is the major rival to Israeli hegemony in the Mid-East, plus the leading nation doing 'interest-free' anti-usury Islamic banking, a must-hate country for the neo-con and Rothschild-tied clans. 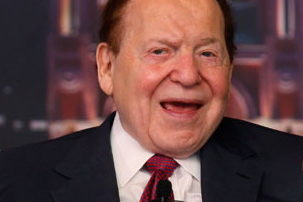 Anti-Iran Billionaire Sheldon Adelson has been allowed by the Chinese to earn even more billions from gambling casinos in Macau China ... leading the Chinese to realize that indulgent relations with Israel, and letting neocon Jewish billionaires earn huge money on Chinese territory, still does not stop Jewish leaders from sponsoring attacks on China
It would not be surprising if, at this very moment, Chinese government inspectors are reviewing their files on 'violations' of Chinese and Macau law by Sheldon Adelson's casinos and hotels
Perhaps Chinese officials may show up soon, and repeat the line of actor Claude Rains' character in the 1942 film 'Casablanca' -"I'm shocked, shocked, to find that gambling is going on in here!"
------
Brandon Smith thinks trade tiff will expand to a war on the US dollar and the greatest financial crisis in history. He describes arrest of Meng Wanzhou in terms of DARPA's "linchpin theory" and distracting us from the bankers.
"The G-20 honeymoon ended even faster than I imagined.
The arrest of Chinese CFO of Huawei Technologies, Meng Wanzhou, has immediately destroyed any possibility of legitimate diplomatic negotiations going forward, and this seems to be by design.   The 90 day "truce" set apparently by verbal agreement during G-20 is likely over mere days after it started. National Security adviser and CFR ghoul John Bolton admitted in an interview with NPR that he was aware that Canada was preparing to arrest Meng at the request of the U.S. while he was eating grilled sirloin with the Chinese. The claim that Trump was not aware of the situation, to me, sounds absurd.
The detainment of Meng and the targeting of Huawei comes with a host of significant potential consequences. First, as noted the trade truce is likely dead on arrival.  While Trump continues to claim that progress is being made and that "soybeans are being sold", we have heard this kind of rhetoric for the past several months.  These claims are designed to produce headlines that create a steam valve for stock markets, bringing them down slowly instead of collapsing them outright.
Second, the possibility of further escalation of tariffs is much higher (U.S. farmers should not expect a reprieve anytime soon, despite rumors of "progress").
Third, there is a chance that China will retaliate by snatching up U.S. corporate representatives (many of them just as embroiled if not more so in criminal enterprises). This is a development I realize the average liberty activist could not care less about, but the average American will see such actions as a slight by the Chinese against the U.S. as a whole. The narrative once again turns to the idea that China should be our focus rather than the banking elites.  Thus, the false East/West paradigm is further entrenched in the American mindset.
If this trend continues, the trade war will eventually expand into a war on the U.S. dollar itself, and when it does, the U.S. will suffer the worst fiscal crisis in its history. Without the world reserve status of the dollar as well as continued foreign investment in U.S. debt, what's left of our economy will disintegrate.
Meng's arrest is a deliberately engineered "linchpin." I have written extensively in past articles on DARPA's "linchpin theory," which is a kind of propaganda exercise more than a theory. According to DARPA, overly complex systems invite growing instability, and like a chain of dominoes, the smallest part of that system could be knocked over by a minor event causing a chain reaction that ends in total collapse.
----------
Related-  Trump Can Stop Extradition  but not without Consequences
-----------   What does NOT make sense is that the arrest happened on Saturday and markets did not find out about it until Wednesday night.

There may be more issues involved in the Wanzhou Meng/Huawei case. Some observers think that Huawei has perfected encryption levels for consumer phones that would defeat Five Eyes surveillance. As for the Adelson casino issue, there is also allegedly concern in Chinese security circles that the Macau casino scene could be a source of entrapment of problem Chinese gamblers with security clearances. In addition, casinos are a natural venue for prostitution and resultant blackmail.

The dollar doesn't have to crash when no longer "the world reserve." But it does take a congress with some balls to just DECLARE THE DEBT TO THE CRIMINAL BANKERS NON-EXISTENT since it was obviously created by the most criminal fraud in the history of the world.

Then start anew with a fresh currency STRICTLY AS U.S. MONEY, not to be used outside the country and NEVER TO BE ALLOWED TO BECOME A SPECULATION COMMODITY for the benefit of the super greedy few.

SPENT into circulation to STAY THERE FOR PUBLIC USE AT NO COST TO ANYONE, banks only allowed to loan U.S. government created money IN THEIR POSSESSION. Plus the money loaned must PHYSICALLY TRANSFER OUT OF THE BANK INTO THE HANDS OF THE BORROWER, no checking accounts. There is no other way to keep bankers honest concerning loan backing.