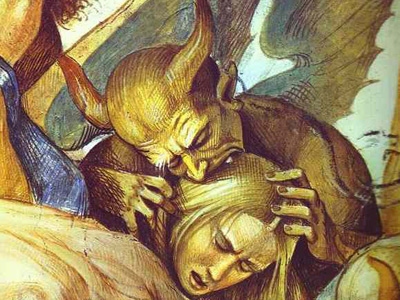 Goddess Feminism is Satanism
by Rich
(henrymakow.com)
Goddess feminism is an ancient occult belief that women are superior to men and that men are here to serve women. It teaches that men are nothing more than the work horses for women to provide for them, while a woman's true strength is to be in charge of men and society. It worships the sacred feminine and elevates it above that of man. This is one of the reasons why women studies and all things female are constantly being pushed in western society as being superior to that of the man.
Women we're strongly encouraged into the workplace for 5 main reasons
1) To destroy heterosexual relationships
2) The Central bankers/government realized that they were only taxing half the population. (CENTRAL BANK.. Item #5 on the COMMUNIST MANIFESTO!!!)
3) To get the children away from the parents so that they could brainwash them via the public school system so that the kids would no longer look to the parents as the progenitors of knowledge and wisdom, but would look to the state as the parent (Communism!)
4) To destabilize society by destroying the family.
5) To further push the homosexual agenda onto the population by creating so many problems between male and female relationships that many, especially women, would become lesbian.
Goddess feminism itself had 5 main goals as well. They said "We women are;
1) Going to put and end to God
2) Destroy the bible
3) Destroy Christianity
4) Destroy men
5) Destroy heterosexual relationships
That is their actual stated goals of feminism. Most men don't mind what's called "equality feminism" equal work for equal pay, etc. But what is described above is part of radical and goddess feminism which is not the same as "Equality feminism" though they try and tell the public that they're the same thing...they're not.
Doctrine of Demons
However, feminism has a far darker side to it which most are not aware of. A side which ties is direcly into demon, worship and Satanism.
Author Betty Friedan said in her 1963 book "The Feminine Mystique" that "...housewives were slaves and victims and that the home was a 'comfortable concentration camp.' Self-fulfillment was vital, she argued, and required that women enter businesses and the professions."
However  Friedan also revealed that when she was writing her book that "..the book took me over, obsessed me, wanted to write itself. I have never experienced anything as powerful, truly mystical as the forces that seemed to take me over when I was writing The Feminine Mystique" (Friedan, pp. 78)
In the occult, letting yourself go in order to be possessed by spirits that do the writing FOR you in known as "automatic writing" This happens not only to some writers, but very often to singers, who time and time again have admitted to being possesed by spirits once they get on stage. So we can already see how the beginnings of the modern feminst agenda has demonic origins and is really nothing more than a "doctrine of demons" 1 Timothy 4:1 But this goddess feminist movement has orgins going back all the way to the Garden of Eden.
"...we women are going to bring an end to God" (Spirit Wars, Jones, 1997, pp. 180, 195).
The goddess feminism is an occult religion akin to sorcery or witchcraft that has been pushed onto the world and especially the US. It was part of their plans for revenge as they sought to destroy Christianity from the earth and as it once spread around the entire world and very few knew about the occult and other dark religions, they now sought to do the exact opposite, destroy Christianity from the earth and have the occult knowledge spread around the entire world.