France has Fractured into 3 Factions 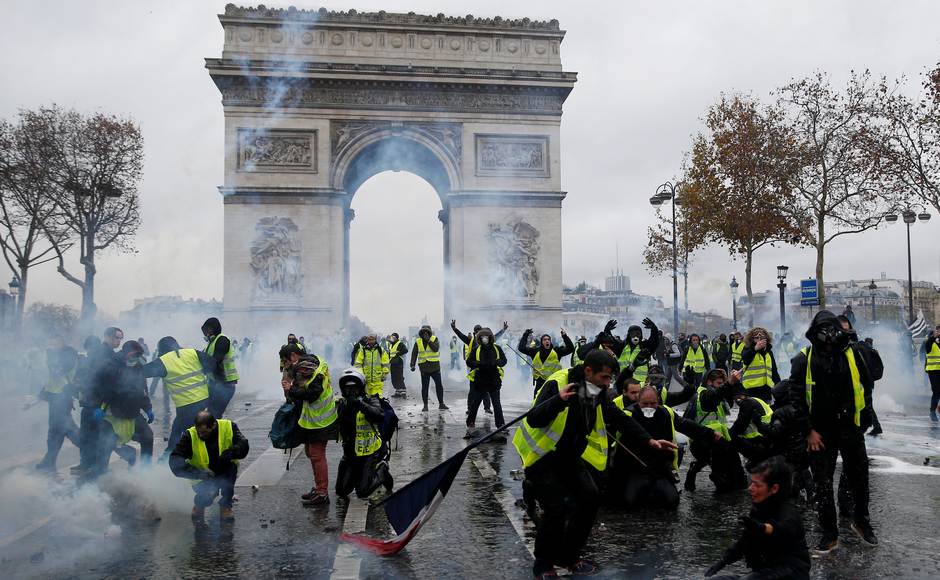 A friend, Gilles
says the impoverished French
don't like seeing
money squandered
on migrants.
His remarks lead off
four noteworthy reports
from my brain trust on the ground.
Gilles: Fascinating times here.
The invisible hard-working class of people living on minimum wages and voting mostly for Marine Le Pen is finally on the move and the government is in shock because this never happened before in recent history.
France is fragmented into 3 groups: The elites praising globalism and liberalism. The Legal and illegal migrants living mostly from the nanny state (and making lots of kids to get more money) and finally the invisible majority of hard-working people funding the lifestyle of the two other parasitic groups.
Nothing has changed since the revolution...
We live in one of the poorest regions: no jobs, all industries closed. People here live with 1,100 Euros a month. Our neighbour, an 85-years-old retired policeman gets 800 Euros/mth pension so increasing the cost of diesel is like a death sentence.
Even the police and firemen are turning slowly against the government; they too live on minimum wages and have a hard time to make ends meet.
The violence you saw in Paris last weekend was mostly due to the Anti-Fa and far left destroying the symbols of France (like Marianne at the Arc de triumph ) while the Arabs and blacks from the suburb came to destroy and steal anything they could from the luxury shops...
The media was insisting that the Far right was responsible for all this but that is a lie.
This country is heading towards a civil war and eventually a split as we have seen in Kosovo in the 90's.
We start seing black and arabs becoming MPs with the associated behavior never seen before in this assembly! 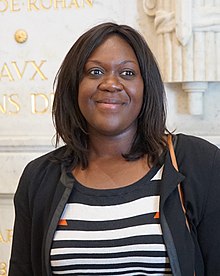 or this lady "A RISING star in Emmanuel Macron's party has been forced to deny allegations that she bit a taxi driver during an argument over a Â£10.50 (â‚¬12) fare."
Eventually, you will see the rise of Islamic parties asking for sharia,
Caucasian Christian French people have lost the demographic battle long time ago, like in Germany, we passed the point of "no-return"
More and more French, English and German people will start to move to eastern block countries that will eventually become economic powerhouses. My German step-brother moved to Bulgaria and loves it, no migrants, the city as safe etc...
-------------------------
Coming back to France has been difficult for the kids: they moved from a very privilege environment in Bahrein to a very depressing one here:
-3/4 of their friends at school come from broken homes, some of them suffering from domestic violence/ incest
- The overall level in class is very low despite the good quality of teachers.
-Young people here are depressed seing both their parents working hard for peanuts
- Nobody believes in God here creating a sense that live is useless and hopeless  (suicide among young people is very high)
So overall it is a challenge for them but at least they can see first hand the result of socialism.
The kids will probably move back to Canada later on or overseas (they don't like the French mentality )
Jules in Sweden
Sweden? LetÂ´s say that on the surface itÂ´s calm but itÂ´s the calm before the storm. I sat in some cafÃ©s recently and overheard old Swedish men chatting:
"We (natural Swedes) will soon live in reservation camps like the American indians. Those damned migrants... The witch wants to become a prime minister and she is insane (Annie LÃ¶Ã¶f).. The nationalist party will just grow and grow when people realize what will happen to them....  I trust in God.... I will go to discuss things in my church...."
I can tell you that it wont continue much longer, that is my firm belief. It can be 1-2 years but the process has started, upright people are growing in courage. And now there are some people who finally realizing that they need to return to old customs and traditions and stand up for their lifestyle. It will be extremely painful for the large majoriy though.
For the first time I saw a Swedish man facing a violent muslim migrant who tried to threaten him. The muslim was driving in a reckless way and the Swedish man(farmer) slammed his car horn. The muslim jumped out of his car and ran to the front door of the Swedish man. The Swede(big man) opened the door violently and jumped out and pushed the migrant away and then he became scared and ran to his car.
Well, well, the Gods are in charge. When the spark is coming out is already decided by the One I guess.
--
In response to: Do You Know Who You Are? Bruce sees his identity slipping away.
Yes Henry I know very well who I am & always knew that since I grew up in the middle of Europe & were thought  RIGHT & WRONG & sense of universal justice with common sense. Now Canadian. Watched Canada slipping slowly into the  moral /ethical  gutter since late 70's. When the homosexual agenda was introduced 1st time in Ontario legislation by NDP member Evelyn Gigantes  who declared herself  a lesbian !!! After that it just accelerated in to the mess we are in today ,with same sex marriage escalated Pride parades- trans gendering  & other perversion. Since all of that is being supported by government  & defended by  hate laws etc. The society  is disintegrating rapidly . Already in early 80's  Olympic  athlete W.D. Gairdner wrote the book " War against the Family " where he pointed out the trend pushed by social engineers !!!  As you pointed out  all this is  presented in the protocols !!  So far all of this follows it to the letter  , incl. Pornography & sex. deviations ,  used against population at large to destabilise masses & destroy their moral compas.
----
I asked George why Khashoggi's murder was so important to so many people.
I think the Turks are milking it for all it is worth to discredit the Saudi Arabian regime. Most analysts fail to note that Turkey controlled Arabia almost exactly one hundred years ago. Arabia was not Saudi Arabia then. Turkey was the guardian of the holy cities of Mecca and Medina. If Turkey convinces the Muslim world that Turkey would be a more worthy custodian, it would make Turkey the spiritual leader of the Islamic world.  The CIA is milking it because they have a program of dumping Trump. There are recurrent stories that Kushner was involved in this mess, possibly even handing MbS a hit list, which would most likely have been handed to him by the Israelis. And don't forget the sheikhdown angle. Anyone possessing the incriminating intercepts would be in a great position to sheikh down MbS for a lot of money. Those are just some preliminary thoughts.

Comments for "France has Fractured into 3 Factions"


What Gilles says is true, but this is only one aspect of the question: what makes the manoeuvre work. When one understands a little in depth how the infernal sect operates, one immediately induces the spontaneous movement of the "Yellow Vests" is spontaneous only in appearance. It has necessarily been initiated by a few professional insiders scattered everywhere.

Oddly, when they block traffic - which is of course forbidden - the police, not only do not intervene but protects them from recalcitrant motorists! And because the criticisms made are largely accurate, many people have joined them.

It is once again an operation of intoxication, which is not the banal "intox": to make the target (here the people) do what it is necessary to do to destroy itself, as was the case with the German people with the episode Hitler (1933-1945).

The high-flying manoeuvre behind the G.J. operation far exceeds the ability of his actors to understand, which will be the dupes, as we will see shortly. Of course, this story is part of the "great major crisis" and multiform imminent.

I will point out once again that when one is permanently deceived, it is always with our "kind participation". And as always, it is by flattering our pride that the master of lies succeeds. In Western democracies, it is asked his opinion to the "citizen" with the vote: what honor do we do! Here, the Yellow Vests are imagining that they have the ability to change the course of things with their little hands! LOL!

It is a mixture of pride and presumption. But it is true that we learn at school that revolutions are made by and for the benefit of the people.

So, yellow vests mime the future official story ... as once did the "sans-culottes" ... as did the former "sans-culotte" did for the great (anti-Christian) Revolution of 1789.

Western Europe and Canada are presently under siege by the international banking cartel. It's end game is the destruction of White Christian identity, culture and wealth. Patriotism and nationalism are the only two things left in their way.

This is "gut check" time for Europe and Canada. Cooperating with the "powers that be" can buy you time but will only ensure your demise.

Putin and Russia can't rescue you and America is no longer fighting against Communist aggression since the Cold War has ended. Unfortunately, Western Europe and Canada are being "hung out to dry".
President Trump is a supporter of the constitutional nation states of Europe and Canada but is being held in check by the same international banking cartel.
What a lot of Americans don't know is that the international bankers had almost defeated America during the Civil War. President Lincoln wrote Russia for help after the bankers threatened to enlist the British and the French on the side of the Confederacy to ensure their victory over Lincoln and the Union. Russia sent ships and the bankers backed down with their plan.
Russia and China know all about Communist tyranny. They experienced it once and are doing their best to make sure it doesn't happen again.