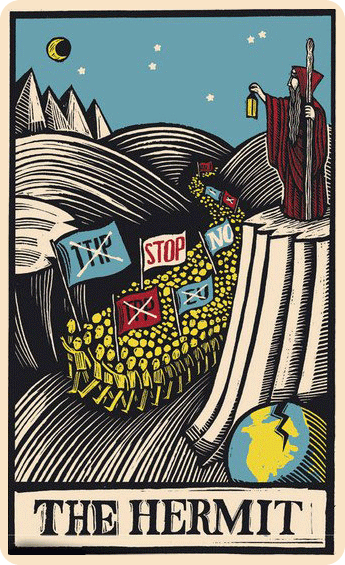 (Left, the Hermit card from 2017 Economist Cover. Yellow vests say no to EU and TTIP fuel tax.)
The Yellow Vest revolt may be genuine but
French citizen Jean L raises some red flags.
There is evidence the bankers initiated it as
false opposition but may have lost control.
by Jean L
(henrymakow.com)
Last week my grandson informed me of two curious facts about the current movement of the Yellow Jackets.
1)  giletsjaunes.com was already registered May 15, 2017 in United States (just after election of Macron and the day after its installation) and the last update is 2018-12.
All the informations about that name domain are secured with dropcatch.com and the transfer of the name domain is blocked and the addresses of the depositor and of the technical administrative contacts are at the same address (2635 Walnut Street - Denver/Colorado) which corresponds to Registar HugeDomaines.com.
Questions: Why Denver and not Paris for a French Movement? And why such precautions to hide it?
Domain Name: GILETSJAUNES.COM
Registry Domain ID: 2124542527_DOMAIN_COM-VRSN
Registrar WHOIS Server: whois.namebright.com
Registrar URL: http://www.DropCatch1428.com
Updated Date: 2018-11-24T09:07:29Z
Creation Date: 2017-05-15T18:13:42Z
Registry Expiry Date: 2020-05-15T18:13:42Z
Registrar: DropCatch.com 1428 LLC
Registrar IANA ID: 3637
Registrar Abuse Contact Email:
Registrar Abuse Contact Phone:
Domain Status: clientTransferProhibited https://icann.org/epp#clientTransferProhibited
Name Server: BRIANNA.NS.CLOUDFLARE.COM
Name Server: PETE.NS.CLOUDFLARE.COM
DNSSEC: unsigned
URL of the ICANN Whois Inaccuracy Complaint Form: https://www.icann.org/wicf/
>>> Last update of whois database: 2018-12-14T17:50:55Z <<<
Pay attention on the cover predictions of 'The Economist' (2017). ​On the 'The Hermit' card above, we can see clearly a political demonstration with a crowd of small yellow dressed men/women.
Their demands (STOP and NO flags) are clearly against Europe (EU flag) and the TTIP (Transatlantic Treaty) and the TIPP (Taxes of the Oil Products). 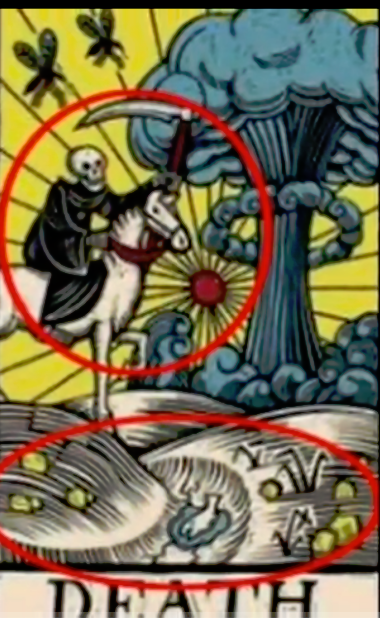 On the detailed card "Death' (left) we can also identify the threats: Death, The rebellious Gallic follow one another like the sheep.
3) The movement started immediately following  Jacline Mouraud's Facebook denunciation of the increase in the diesel tax.
Question: How did her You Tube account which had about 200 contacts... rocket up to to 5 millions views in only 24 hours (which is technically impossible)?
Several facts show that she is a 'useful idiot' who actually works for Macron.
Just after his election, MACRON came in Rennes/Bretagne for a visit to thank his electors and she was chosen to organize the reunion with the journalists.
Do you think really that Macron's staff would assign such a task to a perfect unknown without a background in politics?
She also appealed to Yellow Vesters to accept Macron's compromises. 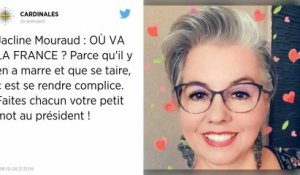 Then when the movement started, she was immediately a privileged guest of the mainstream medias like BFM-TV (24/24 Fake News) RMC or RTL when the particularity of the movement is that there is no leader.
And after the TV allocution of MACRON she was again invited by RTL and she said: It's time to open discussions with the government.
L'allocution de Macron sur les gilets jaunes a mis le feu aux pages ...
She has been rejected by the movement which has perfectly understood what was her part in the starting of the insurrection (to initiate the revolt against the oil tax... as represented in the Hermit Card) PROBLEM.
The only question: Was she in the secret since the beginning or not? I think she has been
manipulated... Like the jihadist in the attempt of STRASBOURG.
------------------------------------------------------------- 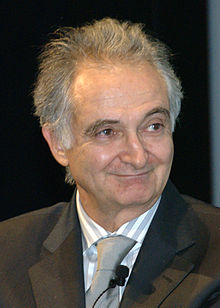 4. Jacques ATTALI, left, the french oracle and puppet of the bankster elite prophesied a civil war before 2022.
SOROS and his 'Open Society' is clearly behind the curtains with the 'Foulards Rouges' and the incidents around the Arc de Triomphe.
This interview with a CRS whistleblower is very instructive and confirms his implicit implication concerning the violent comportment of the police.
On the November 26, a movement "Foulards Rouges' is created by a Jason HERBERT, a journalist and syndicalist [CFDT/left wing and CGT/communist] in the department of Vaucluse (south France) against the Yellow Jackets and immediately its Facebook page is widely commented by all the mainstream medias...
THE "FOULARDS ROUGES" WERE THE NEW 'GEORGE SOROS PRODUCTION' (THE RED REVOLUTION): THE FINANCED CONTROLLED OPPOSITION. They are a
perfect example of the controlled opposition financed by Soros' Open Society.
But rapidly that movement has disappeared after the violent incidents on the Arc de Triomphe et the success of the Yellow Jackets.
Do you you think the 'red colour' was a coincidence?
In PARIS, for the first time in 38 editions - at the stupefaction of all the Parisians included me -the illumination of the Champs-Elysées were "in red" for the Christmas Illuminations... and who was the 'godfather' and 'sponsor' of the manifestation? 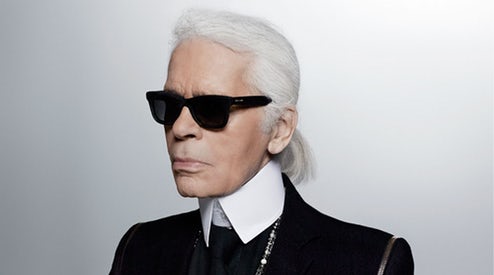 It was
Karl LAGERFELD (left) whose links with George Soros are well known as well as the links of his family with the Nazis during WWII. Recently he criticized Merkel for importing Muslims, who were the "worst enemies of Jews."
5) The STRASBOURG terror attack is clearly a false flag like the last ones (Bataclan, Nice, etc...) to undermine the movement thanks to the classic 'Problem-Reaction-Solution.'  The scenario is always the same: you take a useful idiot of jihadist who is under control, you manipulate him and then you kill him to prevent any unpleasant revelations.
-------------------------
Related - Poll- 70% of French Support Yellow Vests, Want Referendums on List of Demands
-----------Atali Foretold Mass Migration in 2006
Note- Putin's Comments on YV
At his big annual press conference, Putin said that rising fuel prices had served to trigger the demonstrations Yellow Jackets and the general discontent vis-à-vis the situation was thus emerged. However, he stressed
"I think the events in France are of course related to the increase in fuel prices, diesel, but they have served as a trigger which was followed by a general dissatisfaction of a substantial part of society, mainly the native French, "said Vladimir Putin.
"It is necessary to ensure the right people meet. However, such events must adhere to the law. The events in France are linked to rising fuel prices, more than 70% of people support the demonstrations, noted the head of the Russian state. He continued: "It is absolutely inappropriate to evaluate the actions of the French authorities, in my opinion."
---
New First Comment from George-
I agree that there are lots of fishy elements in the Yellow Vest protests. However, all political developments are complex processes, and although "The Economist,"  the Rothschild flagship publication, likes to imagine that its agents are in full control, that is not necessarily the case. Henry's headline on this topic is a good one, but there is more to be said on the topic.
For one thing, the French have traditionally distinguished between espionage agents, agents of influence, and provocateur agents. The damage to the statue of Marianne and the vandalism by what the French call "casseurs" (wreckers) may very well fit into the provocateur category, intended to discredit the vast majority of demonstrators with a legitimate grievance. In fact, there is even an historical pattern of instigating demonstrations with a legitimate grievance precisely to discredit that grievance through the violent behavior of provocateurs, as we saw again and again in the so-called anti-globalization protests of the nineties, in Seattle, Genoa, Goteborg and elsewhere. The beating of all protestors is a way of crushing the legitimate protestors, with the provocateurs retreating behind the police lines from which they emerged.
One way of spotting such provocateurs is athletic build, wearing of police boots, balaclavas, black uniforms, etc. However, there may be some very serious forces at work that cannot be readily crushed by these true and tried gambits. A large part of Europe's population is going into economic shock. There is widespread youth unemployment or underemployment, collapsing industries largely due to the shift of the world's industrial center to Asia, severe cultural anxiety over unruly and criminal immigrants, and frustration among youth over the failure of dutiful study and work to produce the anticipated middle class life.
It was similar frustrations in Germany in the aftermath of WWI that generated the appeal of the imagined savior, Adolf Hitler. As Henry has convincingly argued in article after article, Hitler was in effect a Judas Goat, leading Germany to its destruction. It is fair to say that whenever there is widespread social unrest, the long-term consequences are not readily predictable. Some of the forces behind the Yellow Vests are undoubtedly spontaneous, while malevolent forces are hoping to gain control and steer them, and may even have started the movement in anticipation of its emergence. Although such games may be exciting for the ultra-rich, they are also undeniably dangerous for them as for the victimized masses.
Tim G writes:
What should we make of this?  (Chabad wearing yellow vests)
https://www.youtube.com/watch?v=-b23Op6xo0k&feature=youtu.be
I don't believe for one minute that Chabad supports the cause of the Yellow Vests, so can only conclude this has been released to mock the movement and stake ownership of it.  I for one have had my doubts about the movement since it sprang out of obscurity.  Their manifesto is so unrealistic and sensational that I struggle to believe it's genuine.  Any rational, semi intelligent person would be hard presses to take it seriously.  Their supposed leader, Benjamin Cauchy is a slick, media savvy individual that has garnered significant French MSM attention and has an air of the 'professionally groomed' about him.
The Gilet Jaune movement even got a mention in the (((EU))) Parliament the other day and notable applause from the leeches present.  This is surely not what happens to grassroots movements that pose a genuine threat to the status quo?!
https://www.youtube.com/watch?v=J6yvZcJ1aR4
Controlled opposition is the MO of organised Jewry.  The signs are not looking good for the Yellow Vests from where I'm standing.

A couple of things raise my suspicions about the Yellow Vests:
a) The lack of a leader or spokesman - see also ISIS
b) The name was oven-ready and is of course reminiscent of the White Helmets.
Most likely it is all being orchestrated by the CIA, just as Brexit was. It looks as though both movements have failed.

I would tend to agree here that the 'Yellow Jackets' are more than likely controlled opposition.

Just the simple fact that the disturbances got favorable MSM coverage is almost evidence enough.

Historical sites were vandalized which is an assault on French nationalism. If this were a true revolt by the native people of France these sites would not have been targeted.

A fuel tax is a national tax designed to benefit the nation as a state and not the NWO institutions. Thanks to this outside controlled movement the fuel tax was repealed by Macron.

Any legislation that is designed to strengthen the independent sovereignty of the people of France as a nation will be targeted.

Europe wants to get their nation states back from the foreign NWO non elected officials and their agencies.
If this were a genuine revolt led by French patriots they would have been labeled Fascists by the MSM. It's nationalism that's the new evil now.

As President Trump is finding out, the building or rebuilding of your own nation as a sovereign state will make you a full time target by the NWO forces and their MSM.