Cabalists Preparing Another Holocaust for the Goyim? 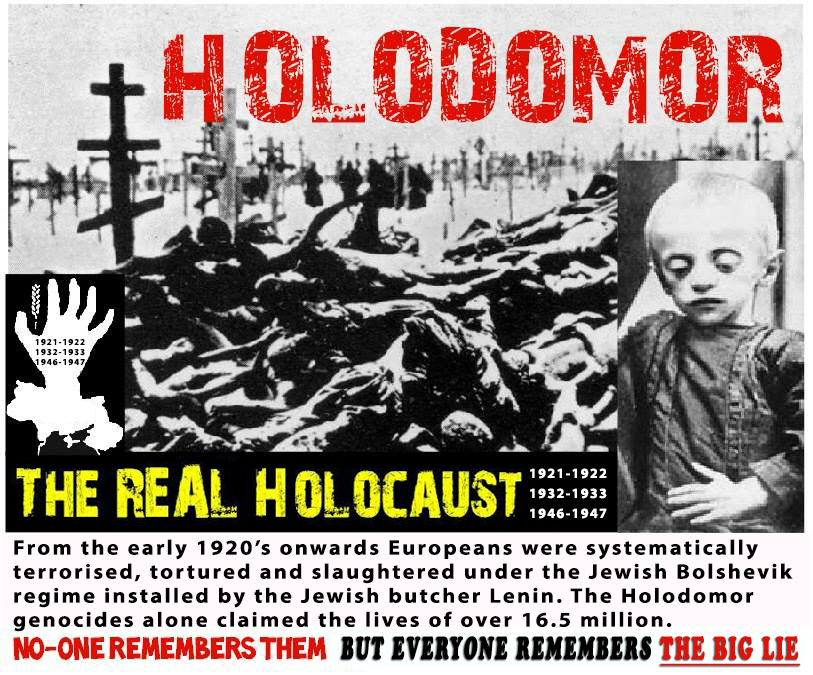 The idea that Cabalist Jews and Freemasons
are preparing a holocaust for Gentiles
seems absurd.  Until you consider the evidence.
by Henry Makow PhD
Leonard Cohen was an Illuminati insider.   In response to a recent article, his former girlfriend, Ann Diamond, recalled that in 1990, he urged her to convert to Judaism because in the future there will be "a holocaust for Gentiles."
I posted the comment but it seemed absurd. However, a reader, DP, wrote and said, "I have had Jews admit to me on a few occasions that there will be a holocaust of gentiles. I laugh at them for being fools and ask them if they believe that there is honor among thieves. So innocent and silly these people are, despite their arrogance."
Another reader, Bill, sent me the lyrics to Cohen's song "The Future."  I extract and highlight the pertinent points which describe the overthrow of Western civilization.
Give me back my broken night
my mirrored room, my secret life
it's lonely here,
there's no one left to torture
Give me absolute control
over every living soul...
Things are going to slide, slide in all directions
Won't be nothing
Nothing you can measure anymore
The blizzard, the blizzard of the world
has crossed the threshold
and it has overturned
the order of the soul...
You don't know me from the wind
you never will, you never did
I'm the little jew
who wrote the Bible
I've seen the nations rise and fall
I've heard their stories, heard them all
but love's the only engine of survival
Your servant here, he has been told
to say it clear, to say it cold:
It's over, it ain't going
any further
And now the wheels of heaven stop
you feel the devil's riding crop
Get ready for the future:
it is murder
Things are going to slide ...
There'll be the breaking of the ancient
western code
Your private life will suddenly explode
There'll be phantoms
There'll be fires on the road
and the white man dancing
You'll see a woman
hanging upside down
her features covered by her fallen gown
...and the white man dancin'
Things are going to slide ...
When they said REPENT REPENT ...
Now I'll list in no particular order the anecdotal evidence that the cabalists are planning to exterminate the goyim.
1) The Jewish-controlled Democratic party is trying to take guns away from the goyim, and staging false flags to justify it. The Democrats are the party of white genocide. RINOS are collaborators.
2. The migrant invasion of Europe sponsored by organized Jewry.   The migrants are mostly males of military age financed by George Soros.
The Freemasons are instruments of Organized Jewry. They have let 1.25 million migrants into a country of only 10 million in just ten years.
Cultural and political genocide preced actual genocide.
3. Then there is the Ukranian genocide carried out by Communist Jews described in the image at the top.
4. The two world wars were both instigated by the Cabalist central bankers. The death of some 75 million goyim in these wars are the real holocaust. The assimilated Jews who died were sacrificed to justify the State of Israel. All wars are banker wars against the goyim and humanity in general. World War II was also a charade.
5. Historian Wolfgang Eggert says the Cabbalist Chabad sect which surrounds Donald Trump believe a nuclear catastrophe is necessary to bring back the Messiah and enshrine Jewish rule. This is consistent with Albert Pike's prescription for WW3.
The attack on marriage and family is genocidal in itself. The effort to mainstream homosexuality and make heterosexuality into pathology
is genocidal. Add the promotion and normalization of miscegenation and the agenda could not be more obvious.
7. The empowerment of minorities of all description to the exclusion of the majority of European descent is cultural genocide. As I said, cultural genocide precedes physical genocide.
8. The plethora of"white guilt" and "white privilege" media propaganda and courses in high school and university designed to make Europeans accept their dispossession. Under the Masonic Jewish (Communist, Illuminatist) dispensation, no one is the master in his own home. At the same time, minorities are given a collective feeling of grievance and entitlement even if they haven't suffered personally or are responsible for their own situation. People who have earned their "privileges" are told to give them up for people who haven't.
The Cabalist bankers have been waging war on non-Jews for centuries. They are not preparing a genocide. They are carrying it out.
Except the traitorous banker-controlled media isn't saying, so people don't realize it's happening. The logic of Communism is that white Westerners one day will be in the position of White farmers in South Africa today if the present trend is allowed to continue. I am sounding extreme because nothing else seems to work.
Do you think Cabalists are preparing another holocaust for the goyim?
---
Related - WW1  The First Christian Holocaust
---
First Comment from WLW-
read your article about leonard cohen's comments. I also see the same thing from different sources. It is here in my article
The Many Forms of Genocide: Hard and Soft. 5th Rev. https://www.academia.edu/34936383/
I'm very depressed. The Anglo-Saxons are committing communal suicide---autogenocide. Yes, the Europeans are committing suicide because of Jewish influence.
All I can say is that current events vindicate the Roman Catholic authorities in the Medieval Age suppressing the Jews. Catholic authorities asked, pleaded to Napoleon to not give liberty to the Jews. We are now reaping the consequences.
--
Makow-  Great Comment WLW but the Masonic Jewish central bankers are responsible not "Jews" in general. 10-20% might be in on the plot (I'd be interested in how many you think are) but most are manipulated like liberals in general.

Comments for "Cabalists Preparing Another Holocaust for the Goyim?"

Yes, the cabalists have been rehearsing another holocaust for the Goyim in Cuba-de facto-run socialist Venezuela. They might set it up elsewhere as soon as they take full control over other governments. They are today what we may be like in the future.

Millions of desperate Venezuelans have fled the country to Colombia and Brazil to make a living as (sometimes teenage!) prostitutes, beggars or street peddlers; others have simply suicided out of despair. Most of the population is underfed and some others have gone cannibal, eaten pets or zoo animals, hunted rats, looted markets or simply starved to death.

Please check it out yourself:

Despair is the cabalists' favorite weapon.

Several are saying the Mexico border WALL is really to keep Americans in as well as illegal immigrants out.

I suppose the great hope for Christians will be that they will be raptured out of here at the appropriate time.

"central bankers are responsible not "Jews" in general. 10-20% might be in on the plot (I'd be interested in how many you think are) but most are manipulated like liberals in general."

If you have a barrel of apples and 10-20% are rotten best throughout the whole barrel. In the case of Jews even the decent ones have children and many of their children will become subversive. As I recall 150 nations down through history expelled the Jew and for the above reason.

Thanks, Gary''Interesting how people who feel aggrieved are the first to victimize the innocent. Also, what
are your plans for the millions of Freemason and liberal goyim who are advancing this agenda?

About 120 mid-level bankers have committed "suicide" over the last three years. Some were Jews some gentile. The gentile Freemasons can get the same treatment, throw all subversives in the same barrel. I'm sure you are aware of all these sealed indictments/pending arrests. If all this isn't bullshit there will be no distinction made between Jew and gentile.
I place most of the blame for our predicament on the Jew but they get plenty of help from gentiles. Go reread the Protocols. That document is incredible, it is exactly what is going on now and it was written well over 100 years ago. In my opinion, no human being has that much foresight. What does this tell you?? There is an evil force, beyond human, that has a hand in running human affairs. Most political leaders are Satanists and this plays a part, but I'm referring to a physical force. As an example, Medvedev was talking to some reporters and he let slip "there are nonhuman entities walking among us". Naturally, the reporters began questioning him but he said he had already said too much

you didn't publish the entirety of the lyric of The Future by Cohen ... a very important part, is :

"destroy another fetus now
we don't like children anyhow
I've seen the future, brother
it is murder"

just the meerest of co-incidences that that tune played over the closing credits of the movie "Natural Born Killers" ? I think not

at the beginning of my decade involvement in the (so-called ) Pro-Life thing, I was told about the report overseen by Henry Kissinger, prepared for the leadership of the United States of America, in 1976, entitled GLOBAL 2000. A quarter of a century before it happened, it predicted the normalization of artificial abortion on demand.

after going through about 7 court cases here in BC ... being called "my political enemy" by Elizabeth Cull, then the deputy Premier - for the sake of my anti-abortion activity in which I proved the New Democratic Party was taking a cut of the $$ subsidies handed to the local abortion "clinics", I concluded that the facts did not matter : we were not going to be allowed to win, anyway. So I stopped banging my head against that particular brick wall.

the Powers-that-be are masterful at cultivating cognitive dissonance ; holding 2 contradictory beliefs at once = 'that the child in the womb most certainly is a human being' as well as 'it's only a fetus/ a blob of unorganized tissue'

Time magazine called him "the most dangerous man in America" because he was saying these things 20 years ago. The most dangerous part of his message, being ; the FACT that the religious racketeers who head up organized Christianity are race traitors ...Their co-operation with the greater communist agenda is crucial for keeping the sheep in the pews from understanding that there most certainly is a calculated genocide going on against white people ... for which the Holomordor was only a dress rehearsal.