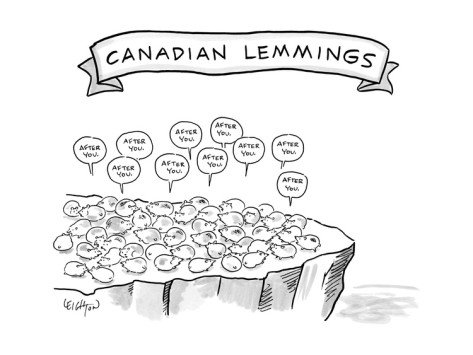 Left, The lemmings are saying, "After you"

I was reminded of this article earlier today
when at the Puerta Vallarta airport,
before boarding my flight
back to Winnipeg, a Canadian kid got in my way.
I side-stepped him. No problem.
But his mother forced him to apologize.
"Now you apologize to
that man," she said. And he did.
Yup, I was at the right gate.
c. 2013 The New Yorker

About ten years ago, the national broadcaster had a TV contest to determine who was "the Greatest Canadian of all time."

This contest was pretty easy because there are only a couple dozen people who might qualify.

A much more difficult and daunting task would be to choose the "nicest" Canadian.

Out of a population of about 33 million, there are at least sixteen million contenders.

When I proposed this contest in jest, my wife said (predictably), "You don't stand a chance."

I agreed.  I'm not competing. Rather, I wish to honour the nicest Canadian and need your help. Please nominate someone and tell me why.


For the longest time, Canadians suffered from an inferiority complex. We felt we didn't have a distinctive national character.

We ignored what everyone else plainly could see. We are "nice." 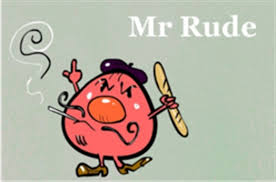 This term cannot be applied to other people. The French have a reputation for being rude. Americans loud and obnoxious.  British arrogant and superior. Germans methodical and industrious. And so on.

Canadians have cornered the market on "nice."


But, nice has a downside. While other countries measure lost productivity in terms of sick leave, Canada measures it in terms of time spent at STOP signs.

"Oops, I thought you wanted me to go first." 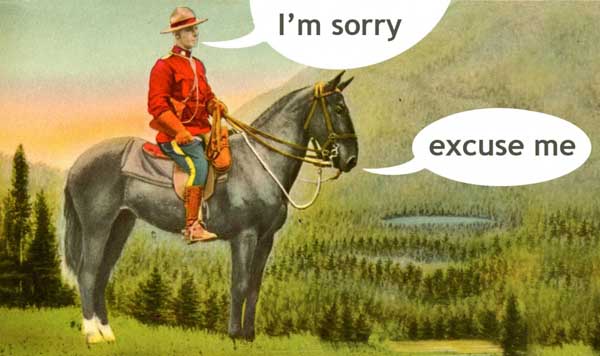 You could say we have turned our inferiority complex into a national identity.

When I lived in Israel, people would bump into you, and they wouldn't notice.

In Canada, they apologize for things you don't notice. You want to say, "No, don't apologize.
You didn't do anything wrong."

Even better, when you bump into them and they say they're sorry.

On Yahoo Answers, someone asked if Canadians are really as nice as everyone says.  The reply:

"As for Canadians, generally yes, they are nice. I am sure there are some dis-likable Canadians, but in my experience, I haven't met them, only friendly and obliging ones." 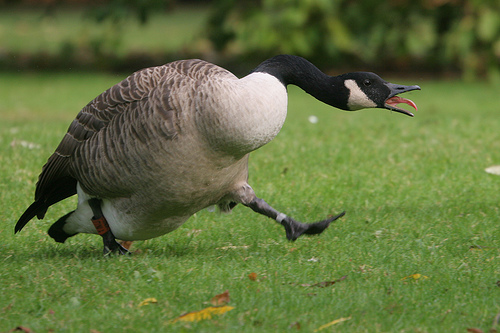 But there were some dissenters:

"Like most people, they will be absolutely fine until attacked, then the fight-or-flight syndrome kicks in. "

"They are only nice until you beat them at the Stanley Cup." (The hockey championship.)

To the question, why are Canadians nice? someone replied: "Yeah, they are really nice and polite but I don't know why. Sorry, i couldn't help."

Anyway, as the world lurches from crisis to crisis, please weigh in on this urgent topic.

Have a great weekend!

First Comment from Dan Butler, who died in February:

My vote goes to you, Henry, as the most sincerely nice Canadian.  Slow to wrath, but swift in justice. 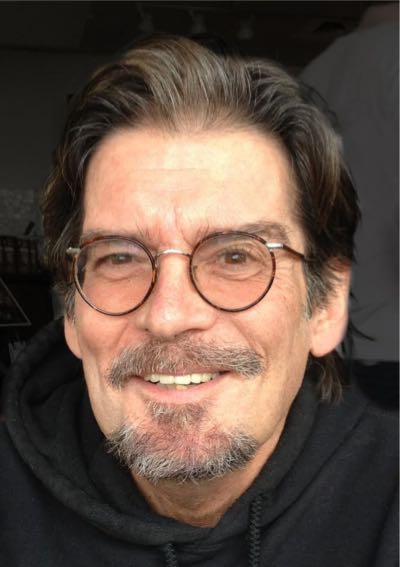 (Dan Butler, 1955-2018)
I have a theory that Canadian niceness is less about political or cultural climate, and more about human adaptation to surviving half a year under icy snow, fog, and dark without killing each other from 'Cabin Fever'.   That's probably how it started.   To my Southern perspective, I've found residents of Minnesota, Maine, and Washington State similar in this way to Canadians.

There's something in human nature about having to be 'totally' nice ALL the time, that suppression of aggression has to come out somehow.  For Vegans, "beta" males, "alpha" women, hippies and Greenies, lesbians, 'metro-sexuals' and 'geeks',   all of which seem disproportionally abundant in urban Canada, it's called "passive aggression"

If a woman's first words to the man who's arrived to take her on a date say, "Are you really going to wear THAT shirt?"  - that's passive-aggression.
A Canadian passive-aggressive woman would say it without a trace of the sarcastic inflexion of her American counterpart and drop the "really".

Most Canadians don't know what many American encounter as visitors to Canada. My two experiences as an American tourist in two provinces of Canada was soured at the border by being detained passively bullied by the RCMP customs without probable cause.  After a final lecture on not getting any ideas about staying in Canada, they let me go.   After a few beers to 'de-creep' in a nice Canadian pub or tavern or whatever it's called up there, people everybody was fine.

Maybe a good follow-up to this contest is "Most Passive-Aggressive Canadian Politician". 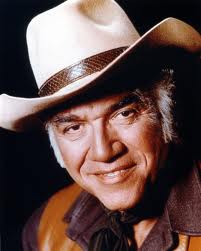 ps:  I'm glad JG invoked the meme of the late TV actor Lorne Greene, (left.)  The TV audience loved Lorne Greene as the wise, strong yet fair and kind 'father they never had'.   Of course, actors are usually very different in life than they are playing a role.

At the peak of the Bonanza TV series fame, the actor who played Lorne Greene's eldest son 'Adam Cartwright' on Bonanza quit the series saying,  "Lorne Greene is a Martinet".

Americans had to go to their dictionaries to learn what the actor, Parnell Roberts meant by that: "Martinets often use etiquette and other rules as an excuse to trump ethics, to the point that etiquette loses its ethical ground."  Basically, that's an over-educated way to say "passive/aggressive".

My vote goes to Robertson Davies! Pure magic. Thanks for all you do - you’d be second!

Living in Northern Illinois, I have met an occasional Canadian and they were nice people. However, visiting Florida in the winter during the 1970’s for the motorcycle races we ran into large numbers of French Canadians from Quebec. It was apparently cheaper for them to live the winter in Florida than to heat their houses up north. They were universally some of the rudest and obnoxious people I have ever met.

it's been said that the reason Canadians will apologize to someone who cuts them off or bumps into them is because Canadians feel that they are perfect, therefore if they drop-the-ball and don't foresee the incident ahead of time so as to avoid it happening in the first place they feel that they must be at fault.

The nicest Canadian doesn't even live in Canada. Look for the Canadian living under the worst of non-Canadian conditions and you will find the "nicest Canadian."

He or she may be found in:

Antarctica does not count as it closely resembles Canada.

From what you describe about Canadians being so apologetic, I didn't know I was Canadian myself. Now stop all of this crap, please! And I'm sorry if I hurt your feelings...

I ride my bicycle on the sidewalk because I don't want to get hit by a car. When I do this and people are on the sidewalk they always apologize and move out of my way. Cars slow down when I cross the street far before they need to. When I am riding down the sidewalk people are unpredictable - if they see me, they will move onto the grass and apologize, if they do not I steer onto the grass. I do not know if a driver will slow down or just hurry up and pass me so I don't have to predict their next move.

If people would act more in their own self interest it would make my riding easier.

I think its a serious matter and deserves serious attention. I'm sick of being apologized to for something I do. I'm just sick of hearing the word "sorry". I really wonder what causes this. Sometimes I do it and I'm sorry I did afterwards.

It all seems very disingenuous but I don't think it can be described as passive - aggressive behaviour.

That is a rare thing in this day and age of cruelty and the ability to rise above it all is a freedom not many have found. To love without return, to care without a hidden motive, to fight for those you love even when they hurt you. That is a really nice person.

Nice as being polite is nothing. Nice is just a facade, a way of hiding your true feelings for others behind pleasantries. Well and good if you mean it, but I don't think the world today really knows what niceness is!

A few years ago, a book came out entitled 'Fire and Ice' (by Michael Adams) comparing Americans and Canadians. What the author reported - surprisingly to most people, I suspect - is that Canadians are much less respectful of authority than Americans. This made me realize however, that Americans are known for having the courage to fight for what they believe in (even against their own government) whereas Canadians, feeling incapable of standing up for themselves, resentfully accept what they are given. So, if you want to understand our 'niceness', to me, it is because we are a nation of milquetoasts whose families (if not we, ourselves) have, mostly, moved here so as to avoid conflict (in England, in France, in America etc.) and to remain physically secure while our more courageous peers remained behind and fought for what they believed in.

We are like flip sides of one coin, reminiscent of dysfunctional families where one parent is the 'authority' figure (the other having repudiated the role, even insofar as in refusing to back up their partner in disciplining the children). In such families, the disciplinarian by taking action, gets the blame whereas 'dear, sweet', Daddy or 'saintly' Mummy is always seen as 'nice' and 'so kind'. So, for me, Canadians have only taken on the role of 'nice' because we haven't got the courage to do otherwise. Now, if we could only combine the positive qualities of Canadians with the positive qualities of Americans, we might just get 'nice' people who don't get pushed around.

If push came to shove, I'd nominate Nancy Greene, 1960's skier and Olympic, gold medal winner as 'most nice'. Her skiing nickname was 'Tiger' so she was obviously highly competitive and aggressive. However, having personally experienced her kindness at a time when I worshiped her as my heroine, I know that she kept that side of her nature in abeyance when dealing with fans. I am glad to say that she seems to have experienced the abundant and influential life to which, in my opinion, her 'nice' and genuine personality entitled her.

I think at least part of this phenomenon is due to being a country of losers.

...so there you have a country a large part of whose population is conditioned by a history of defeat.

I think this put its mark on us and characterizes our deferential approach to others, and our tolerance for others.

It's a good thing. I'm proud to be Canadian.

I don't know if he would be the nicest or greatest Canadian but Lorne Greene of the old western television series Bonanza played the part of a single parent so very well.

I realize that he probably did not write his own scripts but great actors in a positive character role seem to stay with you. And yes, he was Jewish.