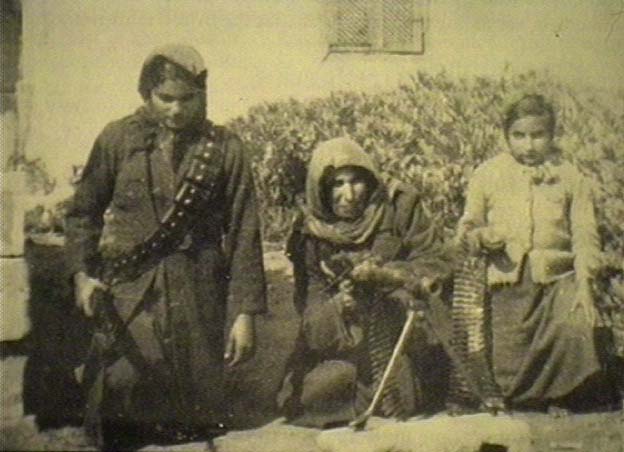 (Left, Palestinian women guerillas)
The Palestine Arab Revolt (1936-1939) against
Jewish migration has been flushed down the memory hole.
The British did the Jews' dirty work.
Only the arrival of massive British reinforcements--which brought troop strength to over 20,000 by 1938--and the intensive use of air power was able to break the back of the revolt. 10 per cent of adult male Palestinians were killed, wounded, or detained by the end of the revolt. Nonetheless, Neville Chamberlain did agree to limit Jewish immigration, one reason he was later poisoned.
Palestine Arab Revolt (1936-1939) Encyclopedia of the Modern Middle East and North Africa
COPYRIGHT 2004 The Gale Group, Inc.
(henrymakow.com)
The revolt in Palestine (1936-1939) was in many ways the decisive episode in the efforts of the Palestinian Arabs to resist the British mandate's support for a Jewish national home in Palestine. Although it helped force a British policy reassessment, which led to the 1939 white paper curtailing Jewish immigration to Palestine, ultimately the revolt must be judged a failure.
At its conclusion in 1939, the Palestinian Arabs were exhausted by more than three years of British repression. Perhaps 5,000 had been killed and 15,000 to 20,000 wounded; 5,600 of their leaders and fighters were in British detention, and most of the rest were scattered outside the country or dead. Such losses, in a population of about 1 million Palestinian Arabs in 1939, meant that more than 10 per cent of the adult males were killed, wounded, or detained by the end of the revolt.
Equally important, the Palestinians failed to benefit politically. Their already divided leadership was fragmented further by the events of 1936 to 1939; and with many of its leaders in exile from 1937 on, it was paralyzed by a division between those outside of Palestine and those inside it that persisted for decades thereafter. These divisions contributed to the failure of the Palestinians to capitalize on the potential advantages offered them in the 1939 white paper, which with its limits on immigration and promise of self-government within ten years, held out for the first time the prospect of Arab majority rule in Palestine.
In any case, the government of Winston Churchill, which came into office soon after, was resolutely opposed to its implementation. After the war, the impact of the revelation of the Holocaust, the growing strength of the Yishuv in Palestine, and the rising power of the United States in the Middle East combined to render it moot. The Palestinians came out of this ordeal politically weaker than they had gone into it, and unprepared for the struggle for Palestine (1945-1948) that, attendant on the establishment of Israel, resulted in the dispossession of about half the Arab population of the country.
ECONOMIC AND MILITARY IMPACT
Economically, the revolt was a disaster for the Arabs. It had begun in April 1936 as a spontaneous strike and boycott of the British and of the Jewish economy of Palestine. Effective though it was at the outset, the result was measurably to weaken the Arab sector of the economy, which did not have the resources or the resilience to support the hardships of the revolt and to strengthen the economy of the Yishuv, which did. The Arab labor boycott, moreover, had the paradoxical effect of furthering the Zionist policy of giving jobs only to Jews--cheaper Arab labor had heretofore been favored by many Jewish businesses--and spurred the economy of the Yishuv to greater self-reliance. 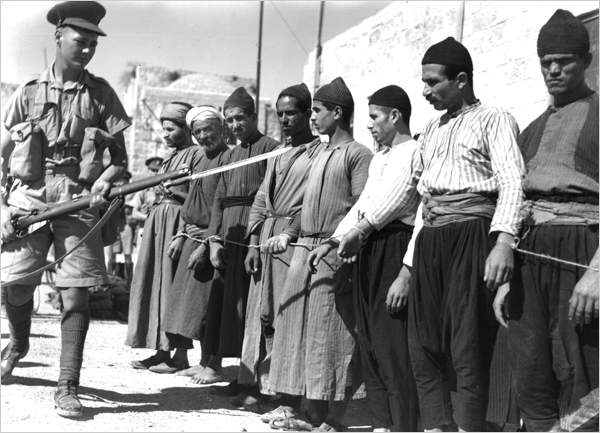 On the military level, the Palestinians lost several thousand of their best fighters and military commanders in combat or to British firing squads, which executed 112 Arabs. Many thousands of others were wounded, detained, or forced into exile. In addition, the British seized over 13,000 weapons and 350,000 rounds of ammunition from Arabs (about 500 guns were seized from Jewish groups in this period), at a time when the British were arming units like the Jewish Settlement Police and cooperating with the Haganah to repulse Arab attacks.
All of these losses, particularly in combatants, military leaders, and weapons, were sorely felt when the Palestinians confronted the well-armed and organized forces of the Yishuv during the fighting that started immediately after the partition resolution was passed by the United Nations General Assembly in November 1947. This fighting grew in intensity until May 1948, by which time the Palestinians had been routed in many crucial areas, losing the cities of Jaffa, Haifa, and Tiberias, and scores of villages, towns, and strategic roads and junctions to the advancing forces of the Haganah and its allies. In some sense, the outcome of these decisive battles (1947-1948) was determined by the disastrous political, economic, and military results of the 1936-1939 revolt for the Palestinians.
The revolt was notable for its spontaneous inception, with local committees springing up in April 1936 to organize a general strike and boycott that lasted until October of that year. Among the motives for the revolt was the rapid growth in Jewish immigration to Palestine: From 1932 to 1936 there were 174,000 immigrants, more than the total Jewish population of the country in 1931. The Arab Higher Committee was formed by Palestinian notable leaders soon after the strike began, largely in response to this pressure from below, but never really gained control of events.
In the sporadic fighting of 1936 and in the intense battles of the second phase of the revolt, which began in September 1937, local organization was paramount, with minimal coordination between the main peasant military bands, which bore the brunt of the fighting. In spite of this lack of coordination, the Palestinians initially had the British on the defensive for much of 1937 and 1938 and took control of most Arab cities, towns, and villages, and much of the countryside. Only the arrival of massive British reinforcements--which brought troop strength to over 20,000 by 1938--and the intensive use of air power was able to break the back of the revolt.
------
Related - Makow - Israel's Descent into a Mortal Abyss
A More Nuanced Look at Economic Factors

I still remember one of my grade school teachers telling us that when it came to world history "might is right".
The Palestinians never had much of a chance once England and America started supporting the move towards international statehood of Israel. Their courage was there but their weaponry was in the "stone age" in comparison to the US and Britain.

What the Palestinians are experiencing today is almost unprecedented in world history. They are a "political hot potato" that the nations are afraid to support in any way. It has practically been outlawed to even speak on their behalf or show any kind of sympathy or even treat them as part of the human race. Shame on us.