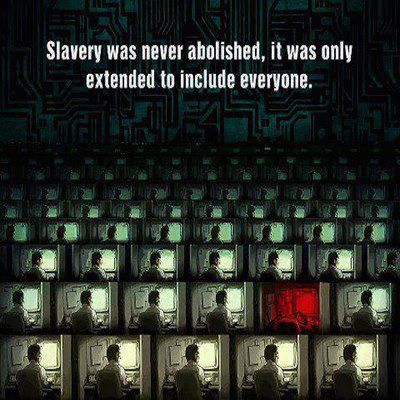 From Chattel Slavery To Capitalism
"None are more hopelessly enslaved than those who falsely believe they are free."
- Johann Wolfgang von Goethe
A clichÃ©, and yet so pertinent.
So many people think that the struggle
against the New World Order
is about not becoming their slaves.
But we ARE already their slaves!
by Anthony Migchels
(henrymakow.com)
The essence of Slavery is that someone else controls the value of our production.
Under Capitalism, people depending on a wage (the 90/99%), typically consume only about 10% of the value of their own production. The entire System is geared to sucking up our production with unearned income: Usury, Landlordism, Speculation, high prices of Monopoly.
In Capitalism, this was achieved by first driving the common people off their ancestral lands by systematically destroying the abundant money systems of the medieval era by forcing Gold Standards everywhere.
This caused a deflation that first savaged the countryside.
In this way, the People lost their means of independence and were forced to work for others for a living, in the cities. Instead of being independent farmers and craftsmen, they were demoted to wage slavery.
By giving him a wage, immediately a large chunk of the value of the worker's production is taken by the shareholder. The value of the worker's production is always much higher than his wage.
With Multinationals, profits and shareholder dividends are typically higher than the cost for labor. More than half of the workers' production is taken by the owners of the company. 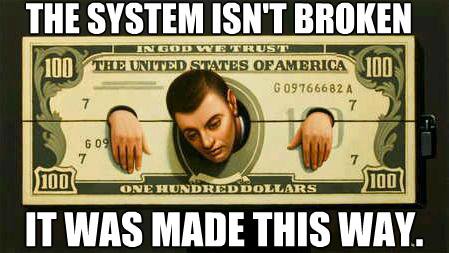 They get away with this because Capital is kept artificially scarce, both through Cartels and through the artificial scarcity of money. In this way, Labor is oppressed, forcing them into low wages and humiliating conditions. With a decent monetary system, not Capital, but Labor would be the scarce factor of production, and men would be either self-employed or co-owner in larger corporations.
The worker receives his wage, and the remaining value of his production is next sucked up with scientific precision.
A wage slave making $2000 per month has a budget something like this: $300 for the State $700 for the Landlord $100 for Energy $200 for 'health' 'care' $150 for Transportation $50 for Telecom Total: $1500
What remains, $500, about a quarter, is to eat and try to live a life. A fraction of what 40 hours work produced, at least $4000 worth.
The beauty of the System is, that when wages rise, prices, debts (and associated usurious cost), rents, rise along, sucking up the extra purchasing power.
The residual wealth that the Middle Class retains during booms is disowned a little later with the inevitably following crunch, forcing them into liquidation at depressed prices.
Free Markets, Right?! Supply and demand! All good and dandy, we think. Fair enough. We use stuff, so we pay.
But when we take a closer look at where all this money ends up, it transpires that all supply chains we depend on (energy, automotive industry, telecom, 'health' 'care') are dominated by massive International Cartels.
Cartels keep supply low, and prices high, so a lot of their profits are unearned income, not really related to their production, but to their market power. They use this to keep competitors out, and the Capitalist's core value is 'Competition is Sin' (John D. Rockefeller).
LANDLORDISM
What is more, a great many people are enslaved by Landlordism, which is a vicious Tyranny, first established by the Sword, later overtaken by mortgages, the Money Power's method of disowning the Landed Aristocracy.
Landlordism is pure parasitism, and all the Land is owned by a really very small group of mostly very old families. For instance: all the homeowners in Britain combined own only 6% of the Land. All the rest is in the hands of a minute percentage of the population. Many of the main Landholders go back all the way to William the Conqueror. 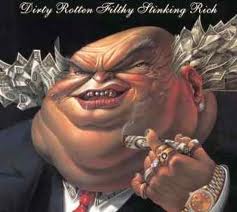 Usury massively raises all these prices. As we know, Usury is about 40% of prices we pay for all goods and services: cost for capital passed on by the supplier.
This includes the land we live on, and on which we are utterly dependent. In fact, Usury actually QUADRUPLES LandlordismÂ´s rents.
But this is not the only way International Finance profits from everything: they also have a decisive stake in most of the Transnationals that dominate the supply chains we are completely dependent upon. Only 20% of Transnationals (there are about 40,000 of them) are independently owned.
CONCLUSION
In the past, people enslaved in the mines and the sweatshops, say late 19th century Britain, they were even forced by their employers to do their groceries in factory owned shops that charged outrageous prices. 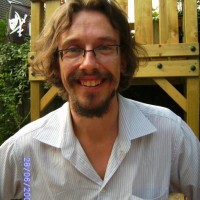 (Anthony Migchels, left)
We think we have outgrown this. It's really time to think again: all that has happened is that Capital (Finance) has upped their game. Local shops on factory compounds are now international supermarket chains. But they are owned by the same people and serve the exact same purpose: reclaiming capital's losses to wages, usurping our production.
People even go so far as to say 'Capitalism has lifted people out of poverty'! What is so insane about this, is that a man, in 1694, worked about 15 weeks per year on his own farm. Then with the ascent of Capitalism, two centuries later, he worked 80 hours per week in some soul-crushing 'job', and it was still not enough: his wife and his kids had to work too, just to pay for the rent and some potatoes.
Even today, we work at least twice as much as three centuries ago.
The most galling of it all is that people claim 'freedom' because once every four years they get to give what remains of their power away to some Kleptocrat insider with 'democratic elections'.
This is the reality of Capitalism, which is centred around International Finance and its Usury (Banking).
No solution to all this is thinkable, without the end of Usury by interest-free credit for the People.
Related:
What Is Capitalism?
10 Atrocities that would not exist without Usury
Capitalism Is Jewish Usury
How Usury Encloses The Commons
First Comment from Robert K
Migchels' has been hypnotized by the classical terms "capital" and "labour".  I know very few persons whose work I would be comfortable describing as labour.  Media people, politicians at all levels, so-called artists, teachers (of curricula of false or biased information), bureaucrats assigned projects that are shelved as soon as completed, sales personnel in stores trying to make themselves appear busy, even the assemblage in the street leaning on their shovels waiting to contribute their daily half-hour of activity following the primary work achieved by some large machine--are they performing actual labour?
What about the people employed in armaments factories? Have they any right to claim moral superiority over the factory owners? The basic motivations of the two parties--i.e., acquiring income--seem to be essentially indistinguishable.
As long as people continue to reason in antiquated or otherwise dubious terms, and to make moral judgments therefrom, we shall never come to a realistic understanding of our contemporary economic position, one key element of which is that automation and robotization are rapidly reducing the role of "labour" in production processes. We are fools when we allow arbitrary bankers' rules regarding income distribution to render this development detrimental to the population.

Comments for "Anthony Migchels - Slavery was Replaced by Debt "

After the Norman invasion, English kings were seduced by the liquidity offered by the international financiers to fight their wars. They agreed to put up their feudal estates as collateral. This was against English law but in keeping with the Shetar, established hundreds of years before Christ. It is discussed in the Mishna, but not in the Bible.

Adoption of this law allowed bankers to confiscate heretofore inalienable lands when debts werenâ€™t not paid on time. This in turn upset ancient relationships between landholders and their knights and peasants. Whatever responsibilities owed by landowners to those dependent upon their lands were repudiated, and people were left with even fewer resources to shift for themselves.

This is discussed in detail in an old law review article by Judith Shapiro: https://archive.org/stream/pdfy-AxcuxNfzg1UDm2Da/The%20Shetar%20how-jewish-law-became-english-law_djvu.txt

America today has the largest wealth inequality gap of all the "developed" nations in the world. It was not too long ago when America has the smallest wealth inequality gap in the world, this was prior to all the anti-nationalist economic laws that were passed in recent years. From NAFTA to other world trade agreements the government decided that protecting American jobs was now an evil called "protectionism".

Your auto plants are a travelling road show now with no more long term commitments to their workers or their communities.

The system today is to keep the labourer a rolling stone bouncing from job to job never gathering any moss. Dead end jobs with no advancement and wages out of line with the cost of living is the present and the future for American workers.

Wages have become frozen and stagnant for the last 30 years with the exception of the Clinton years but those gains were taken back under Bush Jr. and Obama.
This present system will collapse because it's been a "service economy" that can only survive if people spend the money that they don't have.

It's nice to hear from Anthony Migchels again as it has been awhile.

The current systems of government are rotten to the core. Usury and income tax are the two worst items that make the common man a wage slave. As far as I have read over the years, very few people address these two problems. Both usury and income tax need to be ripped out of any civilized society.

What facts does the government have that shows that the income tax applies to anyone? The income tax violates the natural law because a man who does the work is entitled to all of the pay. The governments use threats of violence if the people don't comply but there is no moral reason or justification to obey the income tax laws. By the way, here in the Jewnited States, the internal revenue laws were repealed in 1939. The US isn't enforcing any valid laws if there is such a thing.
https://verydumbgovernment.blogspot.com/search?q=repealed

Usury is a form of stealing or "unjust gain." Income tax is also stealing which does not conform to the natural law which God created. If the Congress decided to eliminate the law of gravity, nature wouldn't give a shit and everything would continue to be the same regardless of that manmade law.

There needs to be a monetary system without usury or interest. That would be a big first step, along with abolishing the income taxes.

It is important to avoid usury. It's better to not have these payments that can destroy our financial wellbeing.
https://verydumbgovernment.blogspot.com/2010/02/scourge-of-usury.html

The Grace Commission Report under President Reagan states that not one dime of the income tax goes to operate the government, but it goes to the interest on the national debt. That national debt is a fraud, in my opinion.