"There was a real mosque massacre by one or two gov-tied killers, and a fake video was made to sow confusion, and marginalise anyone who notices the fakery."
They promote cognitive dissonance. Consider 9-11 when the
government and media went with an official story that does not hold water.
Jet fuel could not have caused the destruction. No plane hit Pentagon or crashed at Shanksville.
by Brabantian
(henrymakow.com)
There is intentionally-created confusion re Christchurch in order to foster the 'conspiracy theory' smear - in particular, a fake 'shooter video', with the likely purpose of distracting from real mosque killings done by government-complicit operatives, killings which we didn't see on camera.
Every serious analyst reviewing the New Zealand Brenton Tarrant mosque shooting video, finds credibility-nullifying elements of hoax and fraud - the ejected rifle brass casings turning into vapour, obvious computer graphics; the lack of damage in walls and windows from rifle fire; the lack of physical reactions & screams in bodies being shot; the barefoot victim shot down, having socks on two minutes later, etc
But it's not easy to accept this, as the next logical question is, how you can get an entire Muslim community to keep quiet about a 'fake' shooting, whilst 'crisis actors' give interviews etc 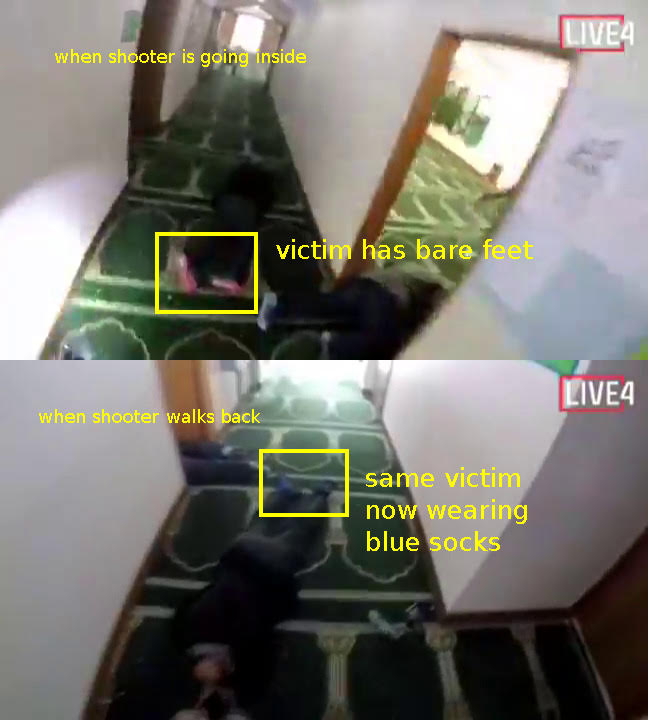 (Barefoot shot guy then getting his socks back on when shooter returns, shooter video 6:49 then 8:41)
The logical conclusion is that, as Veterans Today suggests, there was a real mosque massacre by one or two gov-tied killers, and a fake video was made to sow confusion, and marginalise anyone who notices the fakery
With real Muslims dead, all you need to shut up real witnesses, is to have one or two corrupt Muslim leaders, tell their flock they are dishonouring martyrs by trying to talk to media, and Allah wills the situation as is, so shut up. The same Muslim leaders who let the interior of the mosque be filmed earlier, as a backdrop for the fabricated Tarrant show.
NZ media would dismiss as 'crazy' and not even report, any wounded or witness Muslim who tried to argue against the video - which they maybe haven't seen anyway, given NZ censorship.
The 'white nationalist' boogeyman is obviously very long-term useful & narrative-friendly, to prop up as the alleged shooter. At the same time, there seems meagre ground to argue the gov-mercenary shooter angle, and the 'truther' crowd is distracted, and made to look obsessive and foolish, quibbling about obvious video fraud.
The value of confusion is high to government operations. Consider 9-11, with five widely-spread stories about what took down the New York World Trade Centre towers on 11 September 2001, four stories all deflecting from whatever is the real truth:
(1) The official story, planes, jet fuel, etc - Denounced as impossible by thousands of architects & engineers
(2) Conventional pre-set explosives, linked to the 'Israeli art students' photographed by the New York Times, alongside boxes whose industrial codes showed them to be bomb detonator components (my vote)
(3) Nano-thermite advanced explosives
(4) Destructive energy rays which the government can use from a distance
(5) 1950s-60s recycled 'mini-nuclear weapons' detonated inside the towers
----
First Comment from Eugene-
This is the conclusion that I had started to come to. Brendon Tarrant is a professional so why make a slapstick video? (Trips to Turkey, Israel etc) ....to keep the conspiracy going down rabbit holes. Who were the other two shooters filmed later?  Being from NZ and having relatives down there, they know people who died and this means what the article suggests: a few were in on it, the rest were innocent people.

If we can assume, just for the sake of argument, that real mass shootings really did take place at the mosques and that real people really were shot, killed and wounded, and that the live-stream video by the shooter was faked, as now seems the case, then was the video banned under penalty of 14 years jail in New Zealand, because witnesses who were there at the scene could expose it as a fake, not having gone down as shown in the video, whose production had to involve others, a conspiracy (cons' piracy), if you will?

First they release it into the public domain so that it is up for grabs by all takers. Then they, in New Zealand, threaten to lock you up for 14 years for saving it on your computer and/or sharing it. Hmm, interesting.

No matter what, all the incidents have to do with establishing a police state against which no one is allowed self-defense or any protection of true law. It all aims toward legalizing government terrorism against its citizens.

You notice that there is no longer much talk about the shooter anymore because he is NOT a "white nationalist" at all. A typical false flag hit is always to frame a group of people for a horrific event that they didn't do for political advantage and to create opposition against them.
911 was no exception to this rule.

Just try to imagine if it were Donald Trump who owned the Twin Towers and not Larry Silverstein. The 911 mystery would have been solved a long time ago. Mueller would have had a field day with that one. But, unfortunately, we're all required to go "brain dead"on this issue.