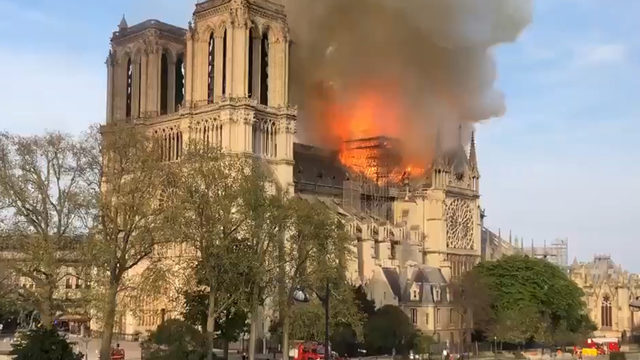 (left, attack on iconic national symbol, France's 9-11?)
875 French Churches were vandalized in 2018.
The Notre Dame Cathedral fire Monday was
the most recent blow.
If this proves to be the work of "radicalized Muslims,"
(aka Mossad)  it may ignite a conflagration
between Christians and Muslims.
This is right out of the Mossad playbook
They even got a patsy in Muslim dress!  OMG. It's Osama Bin Laden!
by Brabantian
(henrymakow.com)
The spectacular fire of Notre Dame Cathedral in Paris will never be forgotten by the French seeing the dramatic news films ... just as Americans will never forget the day the New York towers fell on 9-11.
Whatever the real truth - accident or arson - as to what started the fire, there are major emotion-driving factors at work here, risking a '9-11' level of the social conflagration:
- There have been many, many attacks on European and especially French churches over the last few years, literally hundreds, which, not too long ago, media stories would sometimes suggest 'might be inspired by ISIS (Islamic State)', i.e., Muslims.
- The burning of Notre Dame, is exactly one month after the 15 March 2019 'Christchurch New Zealand mosque massacre' ... and in France which is approximately 10% (or slightly more) Muslim, it is quite possible, that one or more of the many renovation workers who were in Notre Dame before the fire, were Muslim. 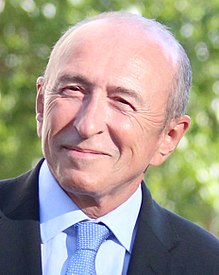 - Discussion of deteriorating societal relations in France has been increasing, as for example in the remarks by Emmanuel Macron's former Interior Minister, Gérard Collomb, after he resigned from office, suggesting that France could in a few years be in a sectarian civil war type of situation. Collomb said:
"Relationships between people are very hard, people don't want to live together ... Communities in France are fighting each other more and more and it's becoming very violent ... Yes, we have five, six years to avoid the worst."
https://voiceofeurope.com/2018/10/anarchy-threatens-france-and-within-five-years-the-situation-could-be-irreversible-ex-minister/
Before the events at Notre Dame, there have been news stories of literally hundreds of attacks on churches in France over the past several years - attacks, attacks which have been escalating in number recently:
"France sees 10 Catholic churches attacked in ONE week" in February 2019
https://www.express.co.uk/news/world/1102958/christian-persecution-france-catholic-church-christianity-religion-edouard-phillipe-isis
"Figures show 875 churches in France were vandalised last year" (2018)
https://www.thesun.co.uk/news/8804063/france-church-arson-attacks-vandalism-christian-heritage/
"Since the beginning of 2019, France has seen a torrent of attacks which have included arson, vandalism, and desecration of a number of its historic Catholic churches ... igniting fears of a rise in widespread anti-Catholic sentiment across the country."
https://voiceofeurope.com/2019/03/2019-catholic-churches-are-being-desecrated-throughout-france/ 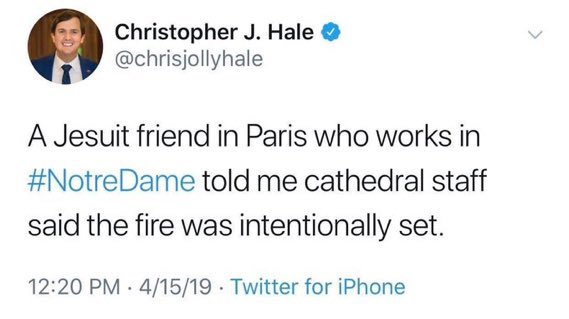 (This tweet was quickly deleted. Also, precious artefacts were removed last week.
This suggests this was a false flag like 9-11.)
In the past, media stories about such vandalism would sometimes speculate that the attacks might be the work of radicalized Muslims, somewhat parallel to the way churches are often attacked in Egypt, which is about 10% Christian.
In the above recent news stories, though, a different suggestion is now made - that the attacks on French churches may be the work of "neo-feminist and left-wing anarchist groups ... radical secularists or anti-religious groups" ... this is, however, unlikely to be the only speculation of the common European in the café or on the street.
And indeed what is of concern now, is first, what the common person is thinking and talking about with close friends regarding this incident, given the background of church attacks, and tense societal relations in France ... regardless of official assurances that the church fire was an 'accident' ... a conclusion perhaps a little too quickly distributed to the media, given that the fire was still raging, preventing investigators from getting a good look inside the church shell.
And secondly, we now have a situation where, if the authorities were to later 'discover through investigation', that the fire was started in an act of sectarian revenge ... we have truly frightening social consequences in Europe ... the potential for a sectarian-ethnic conflict that may arrive much sooner, than even the former French Minister Mr Collomb had feared.
CONCLUSION
An event like this ties into the all the complex forces at work in the world, seeking to create social destruction: - The decades of wars upon Muslim nations, making many Muslims very angry - The manipulated migration waves into Western countries, creating deep social tensions as greatly differing cultures collide - Events which appear to be 'false flag' violence sponsored by big-power security services - Real events of violence and anger by non-state individuals, which are yet incited and fostered by all of the above manipulations
Was the Notre Dame fire an 'accident', perhaps of carelessness, by the cathedral renovation workers? Was it a plot by angry jihadists, timed for the day a jihadi colleague herself accused of targeting Notre Dame, was sentenced to prison in France ... or the month anniversary of the Christchurch mosque killing? Or was it a lone wolf angry Muslim? One or more major security services, following the Reichstag Fire - 9-11 playbook?
I'll put my money on the intelligence agencies run by the Mossad on behalf of the Rothschilds. They are the busiest practitioners of hatred against Christian Western civilization,  false flags designed to remove guns or in this case, provoke war between Islam and the Western world.
----
Related - A good video on that INSIDE JOB; Only one fireman during all the time; And several mainstream correspondents who were in the right place at the right moment--Notre Dame Paris Fire INSIDE JOB, Destroying Tartarian Art By Burning
---Slow fireman reaction time questioned
Note-
Earlier Monday, "one of three women allegedly involved in a foiled plot in 2016 to blow up a car packed with gas canisters near the Notre Dame cathedral in Paris, was sentenced to eight years in prison by a French court for earlier offences. Ines Madani, 22, was sentenced following a three-day trial during which she was accused of encouraging would-be jihadists to go to Syria and participate in attacks against France."
https://www.thejournal.ie/france-jails-jihadist-woman-accused-over-foiled-terror-attack-in-paris-4590216-Apr2019/
'Isis plot to blow up Notre Dame in Paris', propane gas canisters in Peugeot parked outside on 4 September 2016
https://www.thedailybeast.com/an-isis-plot-to-blow-up-notre-dame-cathedraland-rule-the-world
Related- Was fire Jewish Revenge?
First Comment from Jean
Excellent article about the 2018 and 2019 attacks on Christian churches.
Too much cohencidences to be a simple accidental fire: 2 hours before the declaration of Macron, just before Easter, continuing YV crisis, European elections on May ... 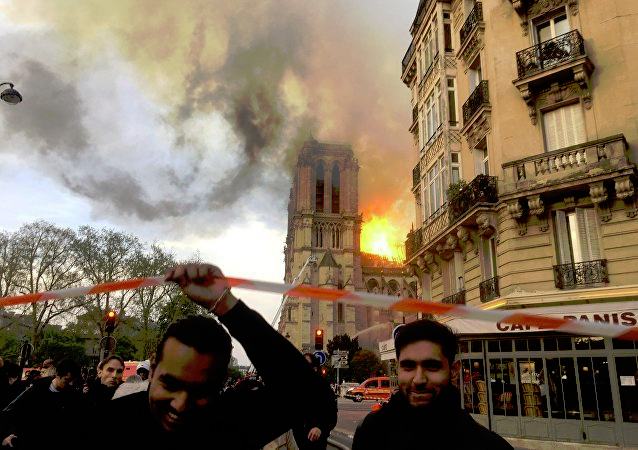 (left, not everyone was distraught)
It's our national 9/11 and the false flag to exit the current crisis. It's like the London fire of London on 1666. It's a deliberate attack by the NWO to provoke chaos.
Nevertheless, on that case, I do not suspect ISIS puppets but Mossad agents because of the complexity of the target and the fact that we are on Easter week with thousands of pilgrims inside the edifice all along the day.
The fire started on the back side and in the attics of the cathedral which was under current renovation
I suspect the job be done by special agents with an AI drone (with incendiary apparatus ) directly managed from a van standing on the road near the archevêché square (on green on the map/left back). See the attached file.
Only five minutes for them to reach the LDJ/headquarter of the Mossad (Rue des Rosiers) which is just in front of Notre-Dame by crossing the 'Ile de la Cité' and the 'Seine'
We will have a beginning of answer if we get an 'accurate'  firemen's report. They will be under huge pressure.

Comments for "Arson Finding Could Spark Backlash Against Muslims "

Is it strange that NO ONE knows the AL AQSA Mosque was also, like the Notre Dame Cathedral, put to fire shortly after? No BIGOTRY in Western MEDIA, is there! I “smell” False Flag by Israeli Zionist “Jews” to create violence between Christians and Muslims
https://ahtribune.com/world/3064-notre-dame-cathedral-al-aqsa-mosque.html

As with everything that happens, there are two different orders of interpretation of this event and many other analogues: the natural order and the supernatural order.
1°/ In the natural order, which occupies most people, who know no other, hypotheses will multiply and, given the lack of trust in the State and the variety of particular opinions, they will remain hypotheses forever. One, although likely, has not yet appeared: the symbolization of the end of the old world, wrongly assimilated to "Christianity" but whose remains, having lost all their life, remained physically, as N.-D. de Paris. For most people, the term "Our Lady" does not mean the Most Blessed Virgin Mary, but such a stone building. Macron said it would be "rebuilt" and architects pointed out that he had used an inappropriate term: he should have said "restored". But it is quite possible that he was not mistaken and that he said "rebuilt" intentionally.
2°/ Even if it means shocking the rationalists (almost everyone today, including the so-called Catholics who are loyal to Vatican II and his Roman jacks), it is indeed in the supernatural order that we reach a certainty: this destruction by fire is a proven fact, and as God is almighty, IT IS THAT HE HAS PERMITTED IT. And why did He allow it? Because this cathedral, which bears the traces of divine beauty, is a CONSECRATED place, that is, apart from being reserved for worship and excluded from any profane use. Yet, precisely, it is visited by millions of unholy tourists wearing the most indecent clothes, i. e.: desecrated daily.

Even if we put aside the crocodile tears of officials on all sides (but all Freemasons with hatred of God), the rest of the mourners are atheists who regret having lost a beautiful monument and a "symbol" of France, which has been a simple geographical entity since 1789 and which is France as a revolutionary, materialist and atheist (at best). But, once again, as the Bishop of Meaux Bossuet said, "God laughs at men who deplore the effects whose causes they cherish. »

Too bad so for art lovers who ignore or even hate God but still want some benefits without paying the real price !

I feel for the French people and their nation.
The NWO cabal wants France to be turned upside down and de-nationalized like England and have been working on it for the last 15 years or more.

The Catholic Church is a large part of the history and identity of the French people. The NWO agents have been disrupting their religious culture with a wave of involuntary third world immigrants who aren't Catholics at all for some time now.

Unlike England, the French aren't quite ready yet to throw in the towel on their nation and heritage. Catholicism has survived for centuries in France and it's not about to go away.

It was the French along with Joan of Ark who successfully defeated the Engish in Northern France nearly 600 years ago to save their country and it will take that same kind of courage to drive out the NWO.