Brendon O'Connell- Israel Has Back Door on All Microsoft Devices 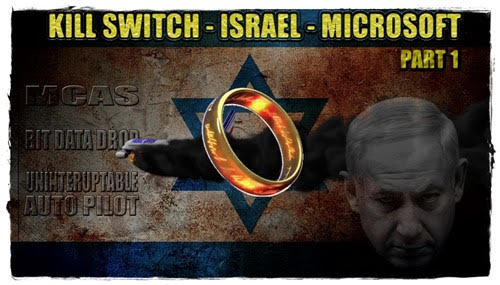 With Microsoft's move to Israel, Israel now has full

Microsoft Windows 10 is now fully coded in Israel. The Windows Security Center. Updates. R&D. It's all done in Israel. The NSA has to mess about to get their malware implanted in 90% of the world's computers. Not Israel, they just include it with a forced update.

It's official, Windows is now officially fully malware in its own right.

But it gets worse.

The Intel hardware backdoor is not limited to the "Management Engine." There are dozens of "God Mode" registry entries that give access to the DEC - Deeply Embedded Core. The Goldman Sachs funded "Arc Processor". This means a simple entry such as "0f3f" in machine code at the command line level will give full access to a system with full administrator privileges. Cybersecurity specialists are full time searching for these computational entries and there are potentially millions.

All of these dozens of software and hardware backdoors were implanted from around 2006 and on, when Intel moved to Israel.

The ramifications are catastrophic in nature.

Israel is now deeply in bed with China and Russia on the massive Belt & Road project. No one is pulling up Israel and it's massive technology theft out of the United States and elsewhere.

A sick, psychotic racial and religiously supremacist state with an ultra-right-wing extremist at the helm has the planet at its fingertips.

Now you know how Israel is so powerful.

Can they be stopped?

This is the most pressing and urgent issue...ever.


1 - ISRAELS SECRET WEAPON THE TALPIOT PROGRAM
How Israel totally dominates cybersecurity and has planted high-level corporate spys all over the world via their Talpiot Program run under Israeli military intelligence.
https://www.youtube.com/watch?v=babgv2qRf4k&t=1s

2 - ISRAELI DRONES WORLD WIDE
1. How Russia China & Israel work together for the One Belt One Road Project.
2. How Israel steals US technology and passes on to China, Russia and Iran.
3. How this is impacting on the Middle East.
4. I ring Homeland Security to make a complaint about Jewish Zionist spying in America - it a good one hour watch.
https://www.youtube.com/watch?v=hfHYJPebq4c

3 - BI BI'S GOT A KILL SWITCH AND HE LIKES TO USE IT
Israel has kill switched the entire planets critical infrastructure. From banking to hospitals to power grids to the Internet of Things and Military Industrial Complex of the United States. Israel is a cyber technology juggernaut.
https://www.youtube.com/watch?v=C0Sw-4MsGQI

6. CHINA & RUSSIA STEAL U.S TECHNOLOGY VIA ISRAEL
The B.I.R.D, the B.I.R.D, the B.I.R.D is the word.
The Bi-national Industrial Research & Development Foundation.
The greatest security penetration...ever...is so funny you have to laugh. Its the only way to cope.
This is a catstrophe for the United States and it is in full view.
Russia got Israel to set up the Bi-national Science Foundation (B.S.F) in 1973 under Nixon and Henry Kissinger.
The B.I.R.D was set up in 1978, around the same time they set up The Talpiot Program.
And then they have the B.A.R.D - Bi-national Agricultural Research & Development Foundation.

Here it is...no one will talk about it.
http://uscode.house.gov/view.xhtml?req=%28title:42%20section:17337%20edition:prelim%29So, when you see BiBi bragging about how clever Israeli scientists are what he's really saying, is his Russian immigrant scientists are very good at stealing US technology.
https://www.youtube.com/watch?v=ZuW0vhn-J9g
-----

Glad to hear that Brendon, whom I call facetiously Australia's greatest anti-semite in exile, is still alive and onto it.

I've also followed Jim Stone on these types of topics for some time now - see https://web.archive.org/web/20121014103629/http://jimstonefreelance.com/corevpro.html

Purchasing a new laptop this year, I went for AMD , even though they too like Intel are probably compromised since A6, being made in China (https://www.productfrom.com/products/CN/0/PC-Processors/1). And the HP brand I bought is everpresent in Israel corralling the apparently doomed Palestinians.

The thing with these new laptops is that it won't work without an EFI part of the drive which is linked inexorably with the UEFI/BIOS of the motherboard. It, therefore, cannot be run without the Windows component lurking ( see https://threatpost.com/microsoft-mistakenly-leaks-secure-boot-key/119828/ as to why this is a bad idea), even though I would like to wipe it all out and go just with Linux. Not that anything recent does not have Israel inside with back door chips as Brendon outlines.

Short of the Samson option, Israel will no more likely be held to account than the original Hollywood moguls were 'persecuted' for stealing all their gear from Edison and heading off to the wild west to subvert culture as the world's greatest victims.

One thing I'd like to call out about the tenor of Brendon's latest article ("Israel Has Back Door on All Microsoft Devices") is the underlying presumption that American technology is somehow the "best" and everyone else in the world (the Russians! the Chinese!) is desperately scrambling to "reverse-engineer" the technical brilliance of Americans.

This simply isn't the case.

Countries like Russia and China are easily capable of producing their own high-quality technology all on their own. In 2019 NASA astronauts ride into space on-board Russian Soyuz rockets -- America today has neither the budget nor the technical competence to actually run its own space program.

It's probably fair to say that the U.S. military has always lost very consistently, and very badly, every time they've had to face off against Russian military equipment in the field. Vietnam, Syria, Bay of Pigs all come to mind, as would many other conflicts. From low-tech assault weapons like the Kalashnikov and AK-47 to high-tech weaponry like the SU-27 or the MiG-31 "space plane", Russian military equipment is regarded the world-over as simply the best money can buy.

The sooner Americans get the nonsense "Russians are reverse engineering our technology!"-meme out of their heads, the sooner Americans can get back to, say, actually having a real space program again... although sadly I'm not sure that will ever be possible again.