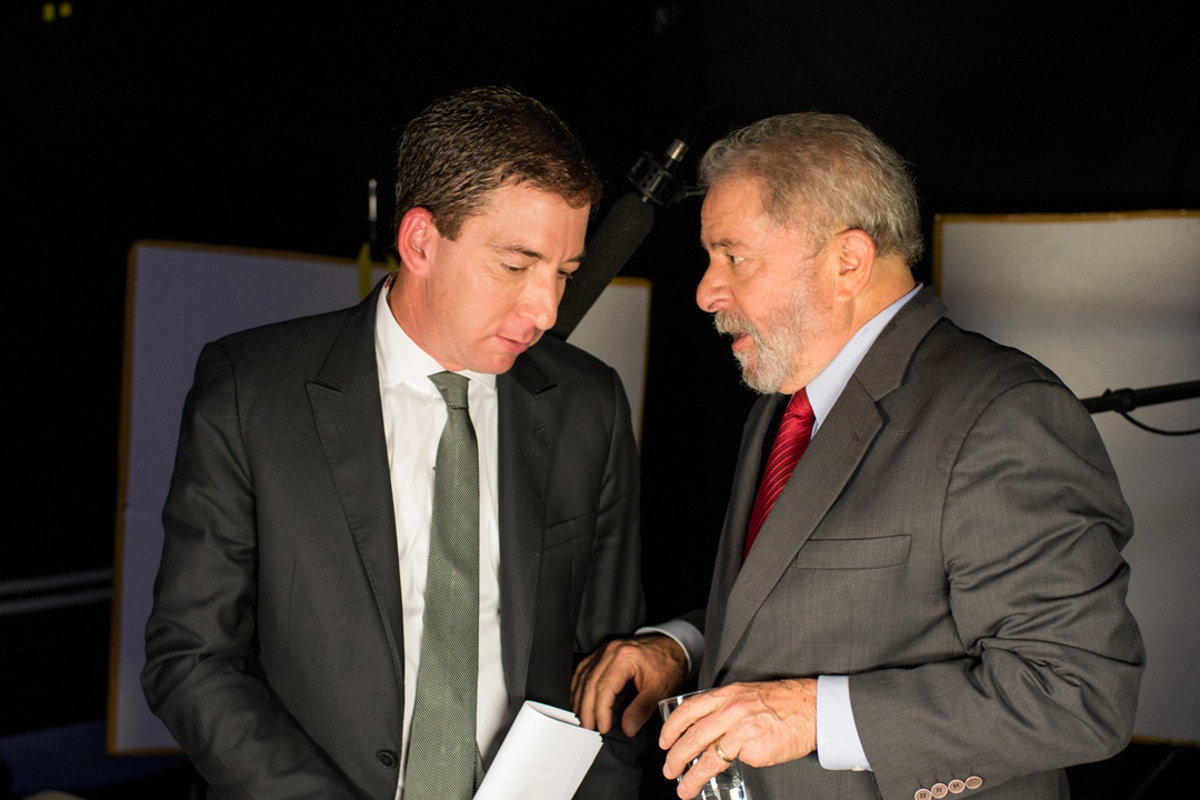 Greenwald receiving orders from his boss Lula
In Brazil, as in the US, the
Left is resorting to gaslighting to obstruct the
duly elected government of
Jair Bolsonaro. Glen Greenwald who has the backing of eBay founder, billionaire Pierre Omidyar, a globalist, is leading the charge.
Marcos: "Thanks for letting common folk Brazilians to have a voice. If any American or Canadian reads about Brazil in the media they would think the radical right wing government is torturing us and killing gays and indians.
You know I have some  reservations about Bolsonaro (the Israel thing), but Moro is a man of integrity. Old school. Brazil doesn't deserve him, if I were he, under so much defamation,  I would say "screw it" and leave, but he soldiers on.
Much of the attacks has a religious basis. The main prosecutor and many in the Car Wash team are evangelical. Moro is also religious. No wonder gay porn producer Greenwald doesn't like them."
by Marcos
(henrymakow.com)
Glenn Greenwald, the lawyer-journalist who became famous with the Edward Snowden case, is publishing in his Intercept website alleged conversations of Brazilian judges with prosecutors, obtained illegally by hackers from Telegram app. All the people who had their accounts hacked had been participants in judicial and police operations that convicted leftist politicians on bribery and corruption charges. Nothing of incriminating in the texts, only usual interactions common in the activity.
However, the Left is going nuts about them and trying to use this fabricated factoid to shut down the anti-corruption Car Wash judicial operation and also destabilize the government. Can we call a leak a bunch of edited texts with no proof of origin, some obviously fabricated, obtained by the use of hackers  pretending to be friends and assuming the identity of prosecutors, in order to entice people to say compromising things?
No, this is a criminal scheme, not a leak. One prosecutor who was hacked showed a conversation he had with a hacker, when he became suspicious that his colleague was not his friend. "This is not your style. Check your phone, you might have been hacked." The hacker simply answered "Yep, I'm a hacker and we have everything we need." 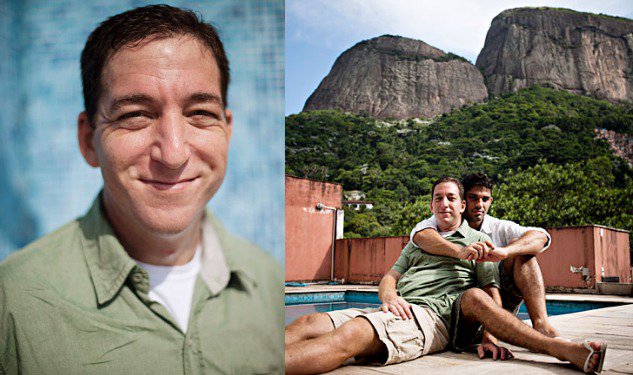 Of greater concern, Greenwald, who is married to David Miranda, a homosexual Congressman from a radical Marxist party in Brazil, is known for promoting Russian propaganda for years. The Telegram messaging app, supposedly un-hackable because of its cryptography, is Russian. Putin is very displeased with Brazilian opposition to the Venezuelan dictatorship of his puppet Maduro.
Just put 2 and 2 together. The  operation has been carefully planned in high spheres and is an attack on the nation of Brazil. Greenwald himself recently  tweeted that the Left needed an urgent operation to destabilize the Right.
Greenwald was hired years ago by Lula and Dilma, when the former President was impeached, to spread lies in the global media, and knows the game. Of course they needed a new sensational scheme , since the Left has lost all credibility in the country, after the disclosure of dozens of corruption scandals where they stole hundreds of billions of dollars, almost destroying the country's  economic and social fabric in the process.
What we see now is a marriage from hell between corrupt politicians from the whole ideologic spectrum with the Marxists. The Left only developed to state-of-the-art level the way Brazilian politics had always been done: a quid-pro-quo where the Executive branch would bribe Congressmen with money or authority over a state company or ministry, where he would be allowed to steal with no restrain. This in exchange of votes in the Congress to approve anything the Executive wanted.
The new Bolsonaro government is trying to put an end in this system, and people are mad. They are also very afraid that the Car Wash operation will put them in jail and are rooting to see it go down. 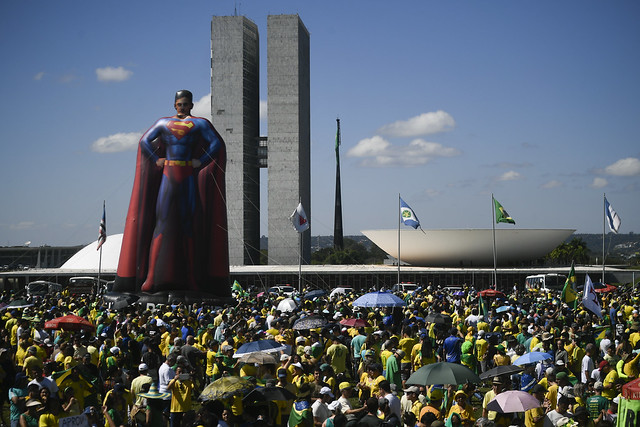 Moro (depicted in the inflatable doll) is regarded as Superman by Brazilian people
The Left (LulaÂ´s Workers Party; PSOL-GreenwaldÂ´s husband party; and the two Communist parties) know that Sergio Moro made them lose their only asset when he put former President-thief Lula in jail. They are nothing without the corrupt demagogue, so they try to label him as a "political prisoner", even though he is accused of seven different charges, from getting money from construction companies to bribes from the purchase of Air Force fighter jets. Of course, there is a hope that, by incriminating Moro, Lula can be released from prison by the Supreme Court.
The  criminal farce will not work, because the whole population (with the exception of communists and corrupt politicians) regard Sergio Moro as a national hero who had the courage to poke the hornet's nest of corruption that had been stealing from the people for centuries. It may even backfire for them, because hacking is a crime in Brazil and it's becoming more clear every day that Greenwald planned and participated in the theft and fabrication of messages. Moro, who is now the Attorney General, has achieved excellent results for only a couple of months of work in his position, like a 23% decrease in the number of homicides, and similar drops in cargo theft,  robbery, carjacking, etc. Brazil was in a state of civil war, where people were afraid of leaving their homes only to be robbed in the next corner. Moro also has a an excellent plan for public security that can change the country for the better if approved by the scoundrels in Congress. 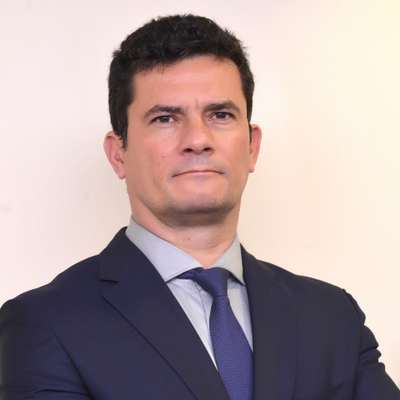 All this makes Moro, left, the ideal candidate for a chair at the Supreme Court, which is driving the Left into panic. The Court today is  hated by the Brazilian people. Almost all its members were appointed by leftist governments (one used to be a party lawyer, who never passed the exam to become a judge) and, because of the fragility of a badly written Constitution, basically legislate on any issue, pushing the Marxist (gay, feminist, racial, State control) agenda. Some are also corrupt themselves and have side business where they make big money through unethical connections. Politicians in Brazil have a special forum and can only be judged by the Supreme Court, which usually make all convictions null and void. People are sick and tired of seeing criminals investigated and convicted by the Car Wash prosecutors walk free to steal again, because of the Court. Every honest Brazilian would love to see Moro as a Supreme Court member.
That's the way the Left works. They choose to sabotage and destroy a country, working with corrupt criminals, if that helps their project of achieving power. They thrive in chaos. The end of Car Wash would be a disaster for the country. As people say here, Brazil would become the next Venezuela.
Unfortunately, the global leftist media is pushing Greenwald's version of the facts, and foreigners who know nothing about Brazil will believe it. In spite of his background as a gay porn producer (hairystuds website) and serial con artist, Greenwald has the backing of hundreds of millions of dollars from ebayÂ´s founder, billionaire Pierre Omidyar, a globalist who partners with Richard Branson and Huff Post. It's a lot of money, but it will not be effective if you, reader, research the truth.  Americans, especially, should pay attention to this situation, because this kind of Saul Alinski smear and defamation tactics is exactly the same modus operandi that is being used by the American Left to take power today.
-----
Related-- Russians in the Commie Camp? RT story on poor Glenn Greenwald
-------------------Brazilgate being spun into Russiagate