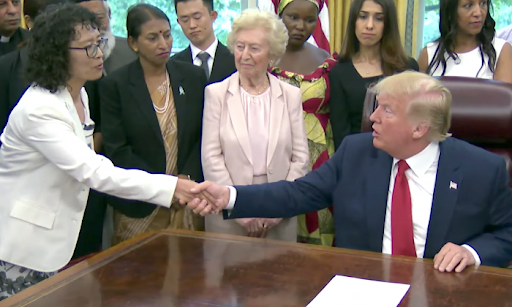 Hard to believe that old people
in a park doing what looks like Tai Chi
represent the biggest threat to
the Communist Party in China. This is
a reminder that ultimately, politics
reflect a religious conflict between good and evil.

by Chris Kitze
(henrymakow.com)
July 20 is the Twentieth Anniversary of the beginning of the persecution of Falun Gong in China
Falun Gong is an ancient spiritual practice from China that was made public on May 13, 1992. Through word of mouth, 100 million people in China took up the practice, including people in all walks of life from dirt poor farmers to the highest standing committee members.  At the time, there were only 70 million members of the communist party, fewer than Falun Gong practitioners.
Falun Gong is also called Falun Dafa.  In Chinese Fa means "law" and lun means "wheel", a Falun is a Law Wheel.  Da means "great" and Fa means "law", so Dafa means Great Law. 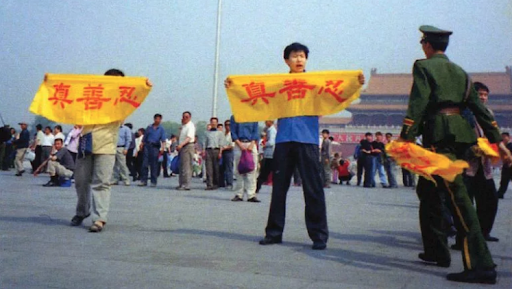 Falun Gong practitioner is about to get arrested for holding banner that says "Truth Compassion Tolerance" in Tiananmen Square, Beijing.
Persecution of good people has happened often throughout history, with Christians, Buddhists and others.  The persecution of Falun Gong is the latest battle between good and evil.  Communism pushes humans away from God, destroying their chance for salvation and turning them to destruction.
Communism was created by the Illuminati and spread from Russia to China in 1947.  At least 60 million people have been killed by the Chinese communist party in a variety of purges aimed at enforcing the monopoly of everything under the power of the party.
The goal of communism, according to Marx was to abolish truth: "There are, besides, eternal truths, such as Freedom, Justice, etc., that are common to all states of society. But Communism abolishes eternal truths, it abolishes all religion, and all morality, instead of constituting them on a new basis; it therefore acts in contradiction to all past historical experience."  (Communist Manifesto, Chapter 2)
Communism also destroyed the original and very good semi-divine Chinese culture through the destruction of the upper class "mainstream" of society and cultural treasures using tools such as the Cultural Revolution to replace normal human culture with the "party culture". 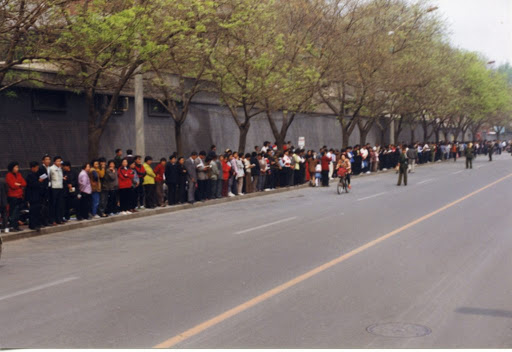 Practitioners peacefully stand on the sidewalk outside Zhongnanhai.  April 25, 1999
Legally, freedom to practice religion is in the Chinese constitution, but laws mean nothing in a country living under communism.   On April 25, 1999, the persecution was beginning and 10,000 peaceful Falun Gong practitioners went to the leadership compound at Zhongnanhai in Beijing to petition the top leadership of the country to stop interfering with Falun Gong practitioners.  This was before cell phones and the internet were widespread in China, so to have 10,000 people self-organize made quite an impression on the leadership.    The practitioners stood silently on the sidewalk outside, not blocking traffic or even holding signs.
Several practitioners were chosen to meet with officials, but Jiang Zemin, the premier decided to attack Falun Gong starting a nationwide campaign to demonize Falun Gong on July 20, 1999.  Soon afterwards, an entire government department, the notorious 610 office was created specifically to persecute Falun Gong.
Officially, the death toll to date is tens of thousands, with tens of millions being imprisoned, tortured and put to forced labor.  Industrial scale forced organ harvesting has been documented for Falun Gong, Christians and political opponents of the communists.
Organs are used for transplantation, but they are also suspected to be used in satanic rituals and in food products.  Recent revelations in human and organ trafficking show this is a huge and international business activity.  The actual death toll is likely in the millions.   The organs are extracted while the victims are still alive. 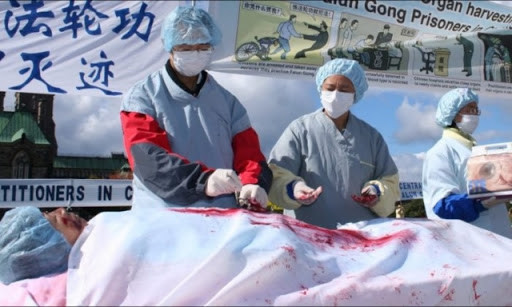 Falun Gong practitioners simulate an organ harvesting operation during a parade to create awareness of the persecution.
Recently, signs point to the imminent end of the Chinese communist party and the persecution.  President Trump is now taking up the banner of religious freedom and including a Falun Gong practitioner in a meeting at the White House.  This has never happened before.
The most important goal of practitioners is to get people to quit the communist party in China, to understand that the communist party is evil and that Falun Dafa is good.
If the persecution of Falun Gong ends, the Communist party will collapse. When the party is gone, things will move to the next phase.   It will be the end of the long nightmare of Communism.  It's also likely the international power elite will collapse western capitalism shortly thereafter and attempt to eliminate 95% of the population.  Like the toppling of the twin towers, communism and capitalism were designed to be destroyed so the New World Order, can be created from the ashes, just like the One World Trade tower was created in New York from the ashes of the twin towers.
-----
Note from Chris- I asked about FG Funding-
I can tell you this from personally doing the meditation for 12 years.  There is no big funding that I am aware of.  Everything is completely voluntary.  There is only one temple at the moment in the world and that was paid for with donations from individuals, mostly from Taiwan and a few from China.  The labor was all donated, practitioners donated their time to build it.  Also, we don't sell things to other practitioners, other than at cost.
Because Falun Gong doesn't own property, don't have staff other than volunteers, you don't need much money.  Things are really done with people's hearts.
The media companies (theepochtimes.com, sound of hope, ntd, etc) are mostly run by volunteers.  Anyone paid, it's been minimal.  Because of the message, we have been blocked from any of the real ad revenue, just like the alt media people.  Before It's News was also targeted by Google and the other evil tech companies and it also suffered.  It survived because people weren't doing things for the money, even the regular, ordinary people writing for BIN and for Epoch Times were there to "spread the truth" in the news.  For this reason, alt media is hardball proof and they the evil will have to resort to ever more draconian techniques to crush it.
This is the power of this practice.  No money is involved and that is why I got involved.  I hate organized religion and especially loath the money, it's really making things evil.  It tempts people.  A high level practice can't have money involved like ordinary human businesses, which is what most of the religions have been turned into.
If people want to hand out flyers on the streets to let people know about the persecution, we chip in to make our own flyer designs, pay the printing costs and we pay our own expenses for gas, parking, etc to attend functions.
There was a meeting in a large hotel in NYC, someone put up the money and then a box was passed around, everyone put in $5....completely voluntarily.  If you didn't have $5 no big deal.  It was all paid in about 15 minutes from just passing the box around.
All those ads you see for Shen Yun are paid for from ticket sales, the dancers and performers are paid a minimal amount.  They do it because they have the heart.  It's a true non-profit.
To me, this is even more remarkable and really shows the way for the future of humanity.  There's probably a story here comparing this kind of practice to the corrupt "Holy See" money laundering operation, which is really pitiful (and evil).
First Comment from Ann
Falun Gong is a threat not only as the author states, but is a threat because it demands that the people stop relying on their pharmaceutical medications (they are told to discard them) and to rely wholly on God the Father (The Law of God) for one's life versus relying on the government with made-up laws and regulations by which THEY enslave the people. No churches, just a personal relationship to GOD.
THEY are The Hierarchy Enslaving You. Show me where it says a man is allowed to rule over others? I CAN SHOW YOU WHERE IT SAYS MAN IS NOT SUPPOSED TO MAKE UP ANY LAW EVER! Man has created that privilege for himself, and the people not knowing any better think that is okay, but it is far from it. It is called SLAVERY anytime one man rules over another with made-up laws by man.
Falun Gong encourages spiritual freedom under God the Father, thus is NOT under man's government. From that Spiritual Freedom to have a personal relationship with God the Father comes His Blessings.
Does anyone know how to get a personal message to Trump?  A message that he can read personally?

Statutory laws are necessary and created by man but these laws are not supposed to break the common law, technically, a duty of the Canadian Governor General is to see that this is so, but this may now be a vestigal position due to our phoney debt with Jewish banks.
The precursor to the UCC is the Law Merchant. An excellent book, available online free is the Byron Beers on this topic. Read this and you will know a lot about the law and commerce and how they are related. See http://www.lulu.com/ca/en/shop/byron-beers/treatise-introduction-to-law-merchant/ebook/product-17441474.html. The water and wine are discussed in the NT. The water is the law of man, the wine is the law of reason (God) which grows stronger with age. Beware and avoid those who mix the water with the wine. This PDF is very very good, written by a former math teacher.

"But Communism abolishes eternal truths, it abolishes all religion, and all morality, instead of constituting them on a new basis; it therefore acts in contradiction to all past historical experience."

That is my definition of Talmudism and 'do all evil' Sabbateanist Judaism. Marx was a Jewish revolutionary, no?

I would like to see how long I would last in Australia with that bus and a mock operation of Israeli doctors taking the body parts out of previously stone throwing Palestinian kids. We are all Falun Gongists now.