Jews Disarm the Goyim But Arm Themselves


Reader: "You can be sure that the American Jews and their IDF-style
will be the only ones left with fully automatic military weapons,
semi-automatic rifles and handguns if the Jews have their way."
Brother Nathaniel says that Israeli Americans have served in the IDF
and represent a sizeable fifth column.
Building 'Jewish Warrior' Camps In USA

These camps are in conjunction with group martial arts training which prepares American jews to form their own militias.

Israelis don't really leave the IDF -- for after active conscript duty they go on reserve status until 45. Thus, these "Ex"-IDF trainers are actually reserve IDF trainers still connected to Israeli government and military.

You can be sure that the American Jews and their IDF-style militias will be the only ones left with fully automatic military weapons, semi-automatic rifles and handguns if the jews have their way.

AND in JEWmerica, only yids have their way.

A considerable part of the Jewish "self-defense" militia problem, as I see it, is that Americans, including the government and military, have no idea how many hundreds or thousands of American Jews have actively trained and served in the IDF and then come back.

And there are at least 100,000 Israeli ex-pats living in the US, male and female who are retired or reserve IDF. Both sexes are conscripted into the Israeli armed forces.

And it will make for a potential 5th column situation with unknown dimensions.

WE HAVE NO IDEA how many unregistered Israeli-made weapons are distributed throughout Jewry by way of these IDF-connected tactical weapons training camps. 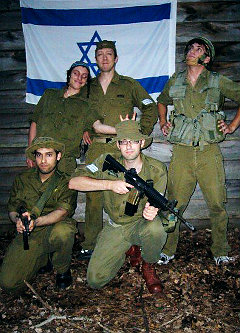 And we are given a scant clue of the secret special permissions and exceptions the "ex-IDF" instructors have from the jew-owned federal gov who also as "Special-Relationship Israelis" do business as registered gun dealers when it comes to importing (smuggling) untraceable Israeli weapons.

Jews form their own "defense" groups under "ex-IDF" trainers like at Pennsylvania's Cherev Gidon Israeli Tactical Academy and at The Legion where "building Jewish warriors" gets kudos and a free pass from the jew-owned main stream media.

Try starting a camp which builds "White warriors" or "Christian warriors" and the miserable kikes will put Chuckie Schumer, Jerry Nadler, and Michael Bloomberg on CNN to condemn it.

And you can be sure the jews will be able to keep their AR-15s and Berettas no matter what the laws are to 'defend' themselves from all those WHITE SUPREMACIST 'anti-Semites.'

Articles like this need to make mention of the Noahide laws written into American code when Daddy Bush was president.  They give Jews the same right that everyone is so scared of in the Sharia law of Muslims.  That is, to mass murder all Christians and other non-talmudists. Insane Talmudists/kabbalah members, etc. have done these mass murders very cruelly every time they have gained the power to do so.

If you want to hear all-talk FM radio in southern California in English (65-70% of FM stations are in Spanish here), you're limited to NPR and KPFK,  both Marxist propaganda mills, grinding out the JWO-sponsored  anti-gun, anti-Trump, pro-homo, pro transgender, pro-commie Leftist garbage ad-nauseam.

You cannot find one FM  talk radio station that even HINTS at traditional conservative American values or Christian mores. It doesn't exist. You can hear a TINY bit of traditional American values and Christian mores on a few low power AM stations near the high end of the AM dial (mostly daytime Catholic talk radio and the occasional Protestant talk host who is not in bed with Israel (as most fundamentalist, non denominational, and dispensational, "Christian" Zionist radio programs are)

While taking a shower at 5:15pm on August 8, 2019, I was listening to National Propaganda Radio's Ari Shaprio quickly introduce Rachael ( ?) who devoted an entire 30 minute propaganda slot to the subject of reducing the incidence of suicides by gunshot by a whopping 50% (or more!!) if we'd only just made it much tougher to own and possess a gun. Imagine, without access to guns, EASILY 50% of intended suicides would NEVER even take place and so many, many lives could be SAVED! Who could possibly disagree with that, other than Right-wing fascist supremacist white nationals, or Trump supporters, or gun nuts. Right?

We're really so fortunate that NPR has quietly and gradually taken over and now dominate perhaps between 1500 - 2000 radio stations in America that were formerly licensed by the FCC to be used as radio stations for COLLEGE STUDENTS on colleges and university campuses across America. Only a FEW universities here in southern California are actually manned by college students, such as the University of Irvine, While most of them, like Pasadena's Community College which is 24/7 NPR Marxist propaganda, have sold out their students for Greener pastures. Lucky us.  Who needs to hear college kids exploring topics that matter to them, anyway?

Chuck Baldwin - "I know I am speaking for tens of thousands of my fellow Montanans and tens of millions of my fellow Americans when I say what I'm about to say. "Red flag" gun confiscation laws violate every principle of liberty upon which our country was founded. There is no due process associated with "red flag" laws. A judge's order to seize the firearms from an American citizen who has not been accused of a crime, charged with a crime, convicted of a crime--or who never even threatened to commit a crime--based on the accusation of a single individual is anything but due process."

Chuck Baldwin 2 - You need to understand that communist gun grabbers will never stop demanding more gun control until they have completely banned and confiscated every gun in America--which will NEVER happen without murdering up to a third of the American population who own firearms and who will die fighting any government agency that tries to take those guns away from them.

Comments for "Jews Disarm the Goyim But Arm Themselves "

Brother Nathaniel has been a strong Christian American Patriot for many years now. He still believes in the US Constitution and is a staunch anti-communist who warns of the many potential dooms that may befall Americans.

Unfortunately, most of his work goes unnoticed and unappreciated. The American public has been trained to reject people like him because of his political incorrectness on the issues.

I don't believe any "gun grab" legislation drafted by a subversive anti constitutional Congress will have a lot of support or cooperation with gun owners or the majority of the American public. No one is in favor of all these alleged random mass shootings going on today. To disarm the American public to create an armed military occupation force in its place is not the answer, that would be the same kind of world order communism you have in the 3rd world countries today.

It's true that a lot of Americans have become discouraged and beaten down by all the freedoms that have been taken away from them but with the right leaders, they can get their courage back.