Attorney General William Barr vows to investigate Epstein's "suicide" but he and his family have longstanding ties to the  Mossad-run pedophile, another sign that Epstein may be in Israel. And what is Epstein's connection to the rash of mass shootings that Barr predicted?
Barr said "a major incident may well occur at any time that will galvanize public opinion", and [FBI Director] Wray said, "The most persistent threats to the nation are homegrown violent extremists, domestic terrorists ..." Those 'warnings' were quickly followed by the 3 white-guy mass shootings on 28 July, 3 August, & 4 August, followed by the calls for more gun & internet controls
by Brabantian
(henrymakow.com)
Never before have we seen a piece of official 'news' so instantly and widely disbelieved, as the alleged 'suicide' of Jeffrey Epstein in USA federal custody.
For example, world-leading financial site ZeroHedge, quickly ran material quoting prison professionals as to how Epstein's 'suicide' as the USA's most famous current prisoner, was virtually impossible:
https://www.zerohedge.com/news/2019-08-10/jeffrey-epstein-dead-apparent-suicide
https://www.zerohedge.com/news/2019-08-11/former-mcc-inmate-says-its-impossible-epstein-have-killed-himself
The official 'news' seems absurd: Epstein already 'having tried to kill himself' a few days earlier, obviously being on special watch ... drawings of Epstein in court looking very little like him ...
The 'body on the gurney' seeming to have a different nose, ears, etc ... it's not even clear Epstein was ever in jail, after the fake-seeming 'arrest', with police 'breaking in the door' of a 27,000 square foot mansion with Epstein's 24/7 live-in servants, covered in the two earlier articles on 'Operation Epstein':
https://www.henrymakow.com/2019/07/epstein-arrest-is-mossad-operation.html
https://www.henrymakow.com/2019/07/what-behind-epstein-arrest-now.html
Those articles spoke of the likelihood Jeffrey Epstein might soon be on a beachfront in Israel enjoying himself, which is exactly what many now think.
Epstein's presumed Mossad-serving blackmail operation said to have filmed countless US and world political figures in compromising situations with underage teens, are possibly one of Mossad's most successful projects of the last quarter-century.
Israel would be not only grateful to Epstein, but eager to show current & future Mossad assets they will be protected ... hence the blatant obviousness of a 'suicide' so fake-seeming, it is unbelievable. This is a message to all Mossad collaborators ... Mossad will take care of you ... even at the point of embarrassing themselves, as 4channers meme about 'Sloppy Job, Mossad!'
Gordon Duff of Veterans Today writes, endorsing the 'en route to Tel Aviv' opinion of Robert David Steele:
"Epstein is a hero in Israel and they would do anything to save him ... Epstein's personal blackmail files ... more than 2000 names are there, video, DNA, lots of DNA, the biggest "honey trap" in spy history ... his massive blackmail files on Trump, led Attorney General William Barr, working with his lifelong partners at the CIA and Israeli intelligence, to get Epstein to safety."
https://www.veteranstoday.com/2019/08/11/intel-drop-the-truth-on-epstein-emerging-where-are-his-massive-blackmail-files/
https://www.veteranstoday.com/2019/08/10/epstein-short-and-sweet-an-intel-drop/
Note: Jewish-heritage US Attorney General William Barr, was a CIA officer 1973-77 ... Barr's law firm Kirkland Ellis represented Epstein ... Bill Barr's father Donald Barr was born Jewish, converting to Catholicism, and was OSS intel during WW2 ... Don Barr hired Epstein to work with him teaching teens 1973-75 ... Don Barr was as fascinated with sexual slavery as Epstein, Barr publishing a 1973 novel about it, 'Space Relations'.

Operation Epstein was launched on 28 November 2018, with the Miami Herald publishing an out-of-nowhere burst of 'investigative journalism' about Epstein's dodgy plea bargain deal 10 years earlier in 2007-08 ... This was published smack in the middle of the USA's 3rd largest state Jewish population, targeting a figure with top USA political links and with apparently deep Mossad and Jewish billionaire ties, in a major media outlet ... this media attack on Epstein obviously 'approved' at the highest levels, the Miami Herald knowing well Jewish media power
https://www.miamiherald.com/news/local/article220097825.html
Other media picked up the baton, and strange anti-Epstein events occurred, such as Epstein's own past lawyer Alan Dershowitz suing and winning in US federal court, to have Epstein's personal documents released. It was obvious the hammer was coming down, but the sharp-and-savvy Epstein used his private jet to fly from France not to Israel, but to the USA, where a mob was baying for his scalp. And now Jeffrey Epstein has, as lady Aangirfan in the UK more accurately put it, 'disappeared':
http://aanirfan.blogspot.com/2019/07/jeffrey-epstein-comments.html
The clear purpose of the nine-month spike of media and legal actions, Epstein's arrest and then quick 'suiciding' disappearance, is to ballyhoo that the US government elites have the Epstein files and likely videotapes ... on perhaps thousands of USA and world figures. Those files remain, though Epstein himself is 'gone', whether to the afterlife or the Netanya beachfront.
The exact way those files are being and will be used, is still a matter to be discovered. Those files are much more important than Epstein himself... So letting Mossad & Israel have Epstein the man, would be an understood part of a CIA-Mossad 'deal'.
Former CIA officer Robert David Steele remains one of the hopeful ones re the Trump revolution and retains optimism that white hats can and will use the Epstein files, perhaps quietly, to remove from power some of the bad guys. There are people who feel the files don't implicate Trump, but Steele's colleague at Veterans Today, Gordon Duff, says his sources tell him the Epstein files DO implicate Trump.
TRUMP 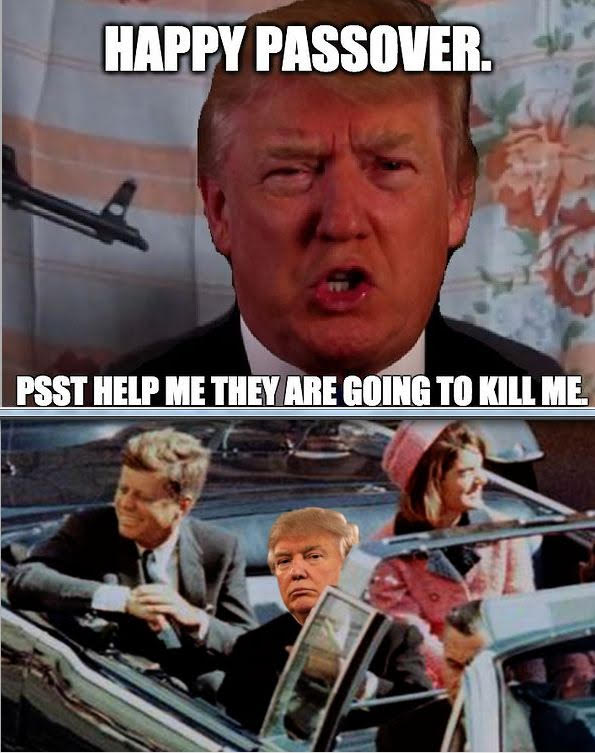 This leads to another major school of thought on Trump, that in the end, he is a blackmailed, terrorized figure, threatened by the Deep State to not keep his 2016 campaign promises ... the blackmail being the reason Trump serves Israel, in fact, allows millions of migrants in, signs budgets with no money for the border wall, allows tech companies to censor Trump's own supporters, and now supports gun confiscation after the recent 'shootings' ... indeed 'blackmailed Trump' is a powerful theme:
Jeffrey Epstein, the web of connections briefly discussed here, is given a lot more detail in the recent journalism of Ms Whitney Webb on Mint Press, who describes a gigantic triangle between a century-long continuing group of North American and often Jewish mobsters; the US and Israeli and partner intelligence agencies; and an ever-renewing set of often Jewish alleged political blackmailers, from Meyer Lansky to Roy Cohn to Jeffrey Epstein. Her articles, including her multi-part Epstein series, can be found here:
https://www.mintpressnews.com/author/whitney-webb/
One of the many curious links from Webb's writing is that the Epstein case also ties into the recent trio of 'mass shootings', which were somewhat forecast by US Attorney General Bill Barr and FBI Director Christopher Wray, on the same day, 23 July.
Barr said "a major incident may well occur at any time that will galvanize public opinion", and Wray said "The most persistent threats to the nation are homegrown violent extremists, domestic terrorists ..." Those 'warnings' were quickly followed by the 3 white-guy mass shootings on 28 July, 3 August, & 4 August, followed by the calls for more gun & internet controls
To 'help stop mass shootings', an offered answer is supplied by 'Carbyne911', a Mossad-tied company led by Epstein's close contacts Ehud Barak & Nicole Junkermann, with China already using a Carbyne-type surveillance product. Profit and more control for Mossad and Israel, after Epstein, after everything.
It's not easy to say what will happen next ... but Mossad may well be enjoying seeing half the audience realize that the 'news is fake' regarding Jeffrey Epstein and that yet, little can be done about it ... as a bearded Jeffrey Epstein in Israel, perhaps tells his amazing true stories to an enthused Mossad audience.
---

Comments for "William Barr has Disturbing Ties to Epstein "

Henry, its absolutely clear that Epstein isnt dead & that since hes one of "Gods chosen", the Zionist banking cartel will not want to kill him unless it was the ONLY way out.
since they control the US govt & military, it was a piece of cake to arrange for Epstein to escape & to have an already dead sort of lookalike, to replace him & be presented as Epsteins dead body.
from the pics ive seen, the nose & ears of the body they removed from the prison are clearly different from Epsteins.
im watching many videos on YouTube where socalled truth-tellers are saying everything besides what most likely happened.

many of these characters are Zionist Jews themselves and theyre making fools of the lemmings who dont seem to be able to think for themselves. they point fingers at everyone else & mention everything else besides the truth.

Epstein may be Mossad himself or he was working under his "girlfriend", who is definitely Mossad.
he is a sick bastard who is allowed to engage in despicable acts because it served the interests of the Zionist banking cartel & illegitimate Israel.

He provided a very useful & "necessary" service to them: getting famous & prominent people into compromising positions & recording the act so that it can be used to blackmail them into compliance in case they ever grow a conscience & try to do the right thing.

despite being a racist, Trump is the best example of this. i believe he would have carried out his promises made before elections but he was warned by them that they have him by the balls & he better toe the line if he wishes to succeed.

his son in law, Jared Kushner is his main handler. he also owes the Jewish banks a lot of money- they set him up from long beforehand so that he has no way out.