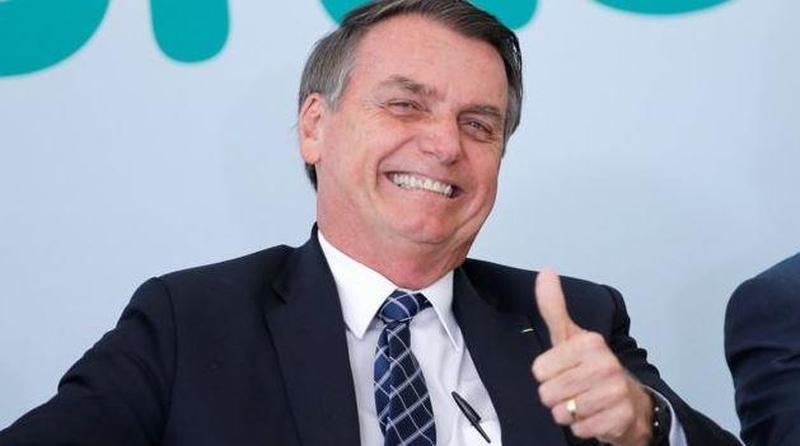 Commies Use Fires to Demonize Bolsonaro

by insisting that Brazil should open up more of the rainforest

Roughly 60% of the rainforest is in Brazil. Readers rush to his defense.

Latest - Rainforest fire hoax: NASA says fires are normal for this time of year
From Marcio:
After reading the silly Zero Hedge article about wildfires in the Amazon, you have retweeted, as a Brazilian, I beg you not to let yourself be deceived by the commie press. In short, please do not be naÃ¯ve and do not help the globalists you are supposedly trying to fight.
Firstly, superpowers are not concerned about either Indians' welfare or the Amazon jungle or the world climate or the air quality, or else they would have pressed China to stop pollution and to wreck its industry.
They are only interested in the wood (which many of their NGOs smuggle out of Brazil to environment-conscious Europe, Japan, Canada, and the USA), (gold, iron, copper, etc - some of the iron mines could be explored for over 400 years!) ore, the jungle pharmaceutical essences (extremely valuable!), drinkable water (some foreign ships smuggle that as well) and...farming for export to prevent them from starvation, especially after a nuclear war (South America and Africa are known as "reserve land" from which food would be imported and where the elite has property - for instance, Norwegian, Dutch and British Royals own lots of land in the Amazon, as well as many well-off people from other parts of Europe, Japan and North America).
The Amazon is very profitable and the globalist elite wants to keep the profits to themselves (as they do in impoverished Africa), and, if they are not to be taken through corruption, they will take them by military force. We lose trillions of dollars due to smuggling of such resources, most of them carried out by such Amazon "saviors". 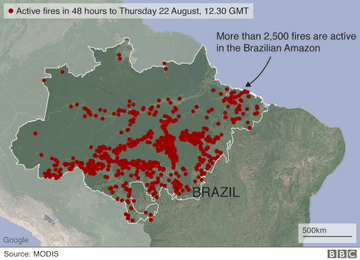 Secondly, President Bolsonaro has always been a fierce enemy of socialists of all shades of red. He has survived an attempt of murder committed by a socialist party activist (he nearly died!) and he has been defamed by the globalist-run press.
The communists have lost some of their grip on Brazil and its rich resources (which helped enrich and keep dictatorships in Cuba, Venezuela, Angola, Mozambique, China, Russia, NicarÃ¡gua, BolÃ­via, etc) and now they want to portrait Bolsonaro as a new Hitler, which is untrue.
He wants to rebuild Brazil, wrecked by over 20 years of socialism. Then, his realistic approach against  crime to decrease its soaring rates (nearly 70,000 murders yearly, mostly through urban crime fostered by drug-dealing gangs, but no one seems to be concerned about such war-like slaughter) has been sabotaged by foreign and domestic NGOs,  as well as by corrupt politicians in the Parliament (National Congress), a.k.a. foreign agents disguised as congressmen and the press in order to destabilize the nation and to propose "public policies" (more socialism) for the most glory of the world tyranny. 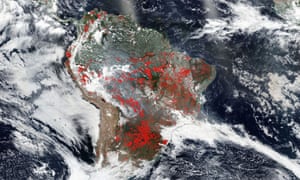 Thirdly, we are in the dry season from May until October - wildfires break out nearly everywhere. Besides that, there are rumors that those "kind" NGOs have set more fires than farmers (have you ever heard of Hybrid War?). The Amazon itself, according to a map displayed in the ZeroHedge article, has burned much less than the rest of the country. It is a huge place (like about half of the US Mainland area). Surveillance investments (and others as well) had to be cut down as the socialists drained the public funds through corruption and funding of socialism all over the world. Most of the fires are environmental crimes; however, there is a lack of resources to fight them.
Fourthly, as President Bolsonaro is not like the previous bankers'  puppets who used to be bribed by globalists before, I am afraid the Amazon will be stolen from Brazilians by military force. Lots of Indian Reservations were created and most of the NGOs encourage separatism and succession through the UN and foreign powers pressure under the excuse of "genocide and self-determination of Indian nations". Actually, the Indian population has grown more than the rest of the population; the government ensures they get all necessary support (good medical care, schools, welfare payments, tax exemption, etc) so that they are not seduced by foreign interests there. Nationalists are in peril!
<
Nevertheless, the press urges the UN and those foreign states to save the Amazon from Brazilians. I guess the next step is to foster a proxy war between Indians (coincidentally living in very resourceful areas) and the Brazilian military (as intelligence officials have long warned the government) - and then another Yugoslavia-like NATO and UN intervention will be on the way to ensure Brazilians will stay away from THEIR own resources in order to guarantee international companies profits. In short, they want us to lose sovereignity over our own territory - something the UK, the USA, France, Norway, Germany, Japan, Russia, China, etc would never accept, nor would the European protesters who recently vandalized Brazilian embassies in London and in Berlin.
---
Marco writes:
I told you the globalists would not rest until they get rid of Bolsonaro and return Brazil to a socialist, subservient status in the NWO. Using fake pictures, fake data and incomplete analysis of the situation, and full support of the left, they are attacking the government that is doing the most to protect the environment. NASA just stated that fires are below average. 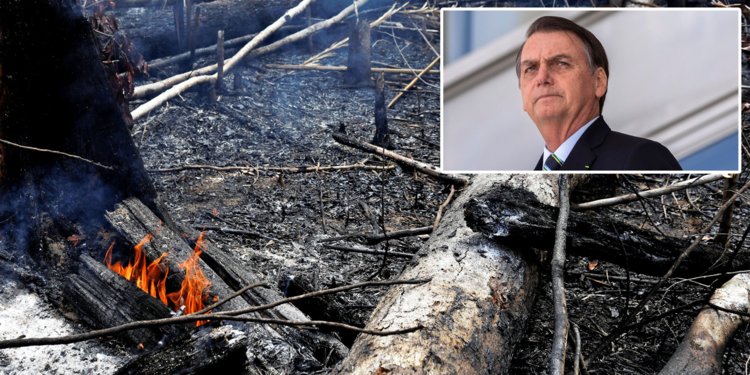 This is an unusually dry season, and half the fires are outside the forest. Much is located in Marxist Bolivia, an all-time record, where the government promotes forest clearing for farms. The  NGOs eco-mafia, the big European farms, they have a lot to lose with a strong Brazil. Also, the left: today the Car Wash police operation disclosed another US$ 1.5 Billion corruption scheme from the prior socialist government. They want attention away from that. European leaders also regretted the free trade agreement with Mercosul, which will expose the fragility and dependency of European (polluting) farms on subsidies.
They can't compete with Brazilian agriculture, so they want to destroy it. Perhaps the wish is to starve the useless eaters of the world? The plan is to label Bolsonaro as an enemy of the environment and a risk for the planet, apply sanctions and put some globalist-leftist puppet back in power in a neutered, submissive country. Then, give them a pass to destroy anything they want without complaint, as they did in 15 years of socialism here. Seed the Amazon with leftist NGOs, bribe Indians and local politicians, and steal the biogenetic material, minerals and land.
--
Related - Bolsonaro Blames NGOs for Fires
--------------  NASA says rainforest burning at below-average rates
-------------- More wildfires are burning in Angola & Congo but no one has  an ax to grind with their Presidents
First Comment from Martin G
Yesterday I read a report provided by you written by a fierce Bolsonaro supporter I suppose.
If you allow let me share this short note to show things from a distinct perspective.
While the former terrorist Bolsonaro is blowing the victimÂ´s pipe for something he encouraged by dismantling the regulatory government offices who look after the environment In addition the Brazilian president tried without success to relocate the Indian Protection Agency taking it from the Ministry of Justice and subordinate it to the Agricultural ministry. Only a Brazilian supreme court decision impeded him to sign it into law (link).
In the meantime, BolÃ­via governed by "an" unaligned Indian president took practical measures to fight the fire in its countryÂ´s jungle by renting a huge fire extinguishing plane until it's over.
Today "an" Brazilian idle sitting minister of defense complained that after Mr. Trump called its Brazilian counterpart offering assistance the US has done nothing (link). Fact is, that the Brazilian military has no clue how to organize its staff to perform the fire extinguishing activities it is supposed to do. The "primitive" Bolivian Indian has a much better-advising staff than the military Brazilian president so proud of his strategic skills.
BTW pointing out the rumor spread by the Bolsonaro aficionado that wrote to you recently, about foreign ships stealing Brazilian freshwater this is not true. What happens is that ocean ships that unload in a river harbor as Manaus, need, once they are without enough payload, to pump water into their tanks in order to remain maneuverable. HeÂ´s obviously talking about something he has absolutely no clue of! Unfortunately Brazilian freshwater in the Amazon is frequently contaminated with Mercury coming from the illegal gold mining activities...
Just in time the Brazilian president allowed "an " extra cash of 7 US$ million for the Amazon fire combat (link)! (the Amazon in Brazil comprises "an " Ã¡rea of 2,000,000 square miles). Not really much!
https://www.ecoamazonia.org.br/2019/08/stf-suspende-transferencia-demarcacao-terras-indigenas-ministerio-agricultura/ https://g1.globo.com/mundo/noticia/2019/08/23/bolivia-inicia-uso-de-aviao-supertanker-para-combater-incendio-florestal.ghtml https://www.oantagonista.com/brasil/eua-nao-estao-dando-apoio-concreto-para-combater-incendios-diz-ministro/ https://www.oantagonista.com/brasil/governo-vai-liberar-r-28-milhoes-para-combater-incendios/

First of all, thank you for letting more people know the truth about the Amazon fires. Now, let me debunk your commie reader Martin G.

Firstly, Bolsonaro, as a former army captain, has never been a terrorist, unlike his political opponents and their commie supporters. Bolsonaro has always supported Colonel Carlos Alberto Brilhante Ustra's books ("A Verdade Sufocada" - it could be translated as "The Strangled Truth"), which revealed the truth about the military repression to Cuba, Russia and China-supported terrorists and guerrillas in Brazil in the 1960s and 1970s and it unveiled the leftist cultural hegemony to mislead and to lie about facts. So the above-mentioned reader simply either lies or he does not know about what he writes.

Secondly, Bolivia's president, known as a supporter of cocaine producing ("cocaleros") and cocaine trafficking (thanks to him and our previous socialist governmentes, Brazil is the second biggest consumer of cocaine), besides being a dictator in a narco-State, does not care about fires. There is a cocaine-weapons axis - BolÃ­via-Venezuela-Cuba-Iran (a.k.a. Hizbollah). Kind of bad, isn't it? Brazilians living near the Bolivian-Brazilian border report BolÃ­via is on fire and nobody cares. So the commie agent lies once more (and he cites socialist-sponsored G1 as a source, what a joke!).

Thirdly, socialists left a huge debt for Bolsonaro's government. No money, no funny. He cannot afford even basic Army operations, let alone put out fires in a huge area.

Fourthly, most of the water in the Amazon is not contaminated - it is too much water to be mercury-contaminated, as all of those rivers are far away from the Amazon River. It happens in a few rivers. Besides, ships that steal freshwater are far away from ports (water is even cleaner there and there is no surveillance or patrol). So the reader insists on misleading and deceiving your followers.

Being a patriot, a nationalist does not make me a "Bolsonaro- aficcionado" - patriots have not politician pets or mascots - they love their homeland, their nation and they hate globalists.

It seems your fierce globalist, socialist "aficcionado" commentator, as all of the communists, and perhaps an infiltrated foreign NGO (a.k.a. foreign secret service) agent has been trying to conduct some misinformation psy-op. Keep an eye on such people. May I call him "Pinocchio"?