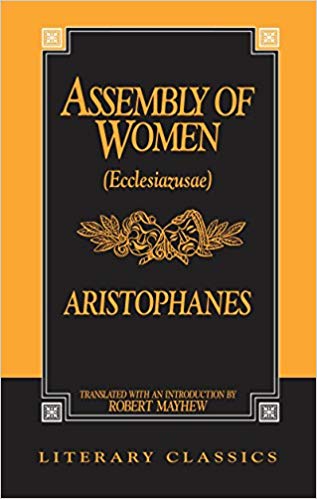 Feminism isn't new
A specter is haunting Athens, the specter of communism. This premise animates the plot of Aristophanes' comedy "Ecclesiazusae" (or "Assembly of Women"), wherein the heroine Praxagora leads a conspiracy of hags dressed as men to vote themselves into power. Fresh from her victory, Praxagora unveils her plan for a brave, new world where all property, children, and sex are held in common. What follows is an uproariously funny, shockingly vulgar, tremendously insightful satire of communists and the logical consequences of their ideology. Mayhew's translation and introduction would make for a perfect adjunct to any discussion of Plato's *Republic*, especially in an introductory Greek Lit & Civ course.
First, Aristophanes has arguably innovated aspects of communism that would later influence Plato. Second, the play contains so many allusions to contemporary events (helpfully explained by Mayhew), that it provides a useful introduction to ancient history, political philosophy, and dramatic literature. Last, the comedy is funny enough for anyone (particularly sophomores!) to enjoy, and if it's the only play they actually read, they'll know something important about ancient Athens, thanks to the guidance of Robert Mayhew. (Amazon Review)