(The trailer, 35 million views)
La La Land transports us back to an era when women loved men,
and people behaved with self-respect & dignity. Marriage and family were ideals.
Its charm - completely free of PC propaganda, occultism, depravity & diversity.
There are Blacks; the hero is into jazz but no flaming gays. The surprise - it was universally acclaimed, grossing $455 million and winning Oscars for Best Director and Actress.
La La Land is a movie that conservatives may have overlooked.
Updated from Feb. 1, 2019
by Henry Makow PhD
I had mentally blocked La La Land when it came out in Dec. 2016.
A musical? 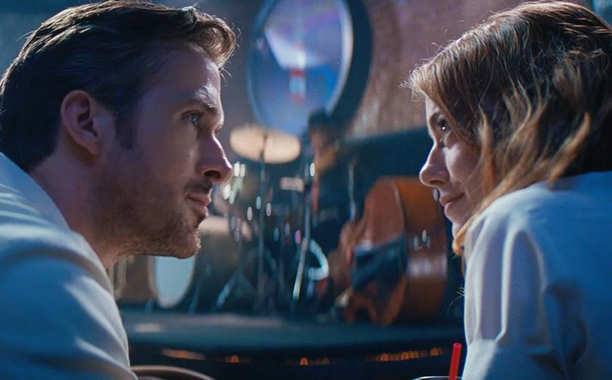 But I watched it again last night and was mesmerized. It took me to a mythical place, an idealized (sans #MeToo) vision of Hollywood in the middle of the last century.
I am always condemning Hollywood so I must acknowledge when it hits one out of the ballpark. This movie is a work of art that gives me hope for civilization. It is not so much a story as a complex symphony of feeling with sweet and sour but never false notes. They reflect the struggle of Mia, an actress & Seb, a jazz pianist-- to follow their dream. Each scene and narrative twist is original, fresh and unexpected.
Ryan Gosling learned to play piano and dance for the role. Emma Stone is a consummate actress. Both actors are so convincing it is hard to believe they are acting.
And it was so nice to see Emma Stone wearing dresses. (Anyone who taught women to be feminine again would make a fortune.) 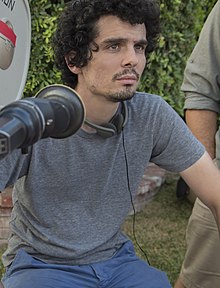 Writer/ Director Damien Chazelle, 34, left, wanted "to take the old musical but ground it in real life where things don't always exactly work out," and to salute creative people who move to Los Angeles to chase their dreams.
Wikipedia: "Having been fond of musicals during his time as a drummer, Chazelle first conceptualized the film alongside Justin Hurwitz while attending Harvard University together. Moving to Los Angeles in 2010, Chazelle wrote the screenplay but did not find a studio willing to finance the production without changes to his design. Following the success of his 2014 film Whiplash, the project was picked up by Summit Entertainment...
La La Land was critically praised, especially for Chazelle's screenplay and direction, Gosling and Stone's performances, Hurwitz's musical score, musical numbers, cinematography, and production values. Both the American Film Institute and National Board of Review selected La La Land as one of the top ten films of 2016.[5][6] It won in every category for which it was nominated at the 74th Golden Globe Awards, with a record-breaking seven wins and received 11 nominations at the 70th British Academy Film Awards, winning five including Best Film. It also received 14 nominations at the 89th Academy Awards, tying the record for the most Oscar nominations with All About Eve (1950) and Titanic (1997); it went on to win for Best Director (Chazelle), Best Actress (Stone), Best Cinematography, Best Original Score, Best Original Song ("City of Stars"), and Best Production Design."
Critic Mark Hobin captures the movie's appeal: "Chazelle makes our present era seem so much more magical. There is an exuberant quality I haven't seen recently. Mia and Sebastian radiate sweetness too. This uncorrupted pair shares a purity. You want them to be together. Their emotion is real. You fall in love. This is why we go to the cinema. If I may paraphrase a famous expression once said by Humphrey Bogart, La La Land is the stuff that [movies] are made of. It is sublime." (fastfilmreviews.com)
La La Land exists only in our hearts. But it's a real place and we need to go there more often.
------------------------------------
Related - Daughter of Fedex Founder helped finance movie

Excellent movie Henry, no one got shot or screwed. Thanks. I just watched it.

Thanks for your review of "La La Land". As someone who has been working on writing a musical for quite a long time I skipped through the songs briefly on Netflix some time ago, decided they "weren't much good" (I'm not mad on Jazz and was hoping, after all the hype, for Rogers & Hammerstein type melodies; LaLa Land's tunes just didn't match up ... but whose tunes do?)

Anyway, after reading your review I gave it a second chance and found it brilliant. Really uplifting. No gratuitous sex scenes. Great performances and a script of near genius. In the context of the story I also really enjoyed the songs.

You are right. That's what art should be for. It is hard in this era to find such material without resorting to old classics like the Frank Capra films.

Oh I saw La La Land from day dot probably 8 times- got the Soundtrack etc.... it was a CLEAN Movie as you rightfully said devoid of symbols etc- how the director got away - I donâ€™t know....

Another movie you might want to check out is CRAZY RICH ASIANS...

Void of Symbols- Give a nod to BIBLE HOME STUDY and carries on to be fun with a little exception an effeminate character ..,

Love to hear your thoughts on that.

Have a Blessed Day Sir now you got me singing La La Land songs.... lol

I never saw the movie La La Land but now I want to see it. What you say about this movie reminds me of the song by A Flock of Seagulls that came out about 1982. I was a 15 year old when the song came out and it's been a favorite of mine since then.

Today we are told to be sensitive to gays and lesbians and how that they have real love. The video to the song was basically highlights from the movie "Career Opportunities" where the two characters are madly in love. Jennifer Connolly is very beautiful and her character hides in the Target store until closing and the guy who works there played by Frank Whaley finds her and instantly falls in love and she falls in love with him. A true love story.

The song backed by the movie scenes really gives you the feel of true love commanded by God between the two sexes. There may be some Illuminati symbolism in the movie, I don't know but most movies do but I don't throw the baby out with the bath water.

To show how we are being brainwashed as a society, I wrote a comment in the comments area that basically the characters are in love, a love between man and woman like God's creation. Some idiot reacted and said why bring Christianity into it?...

Ironically the movie Career Opportunities takes place in Target but years later Target jumped on the transgender movement and either have "gender neutral" restrooms or at least allow men and women in the opposite gender's restrooms. All in all this song and music video does touch deep in my heart what God intended for man and woman.

Link to the video -

Wonderful acting, gorgeous musical score, outstanding performances, beautifully photographed and a tragic story about the complexities of modern life and their impact on love and relationships.

Donâ€™t be fooled. This is what the mainstream media must do on occasion to keep or restore trust. They know they canâ€™t go full-tilt commie 24/7. Every now and then, something must be done to get the sheep back onto the reservation.

While it may be an enjoyable production, still turn your back on Hollywood to keep their overall ratings low.