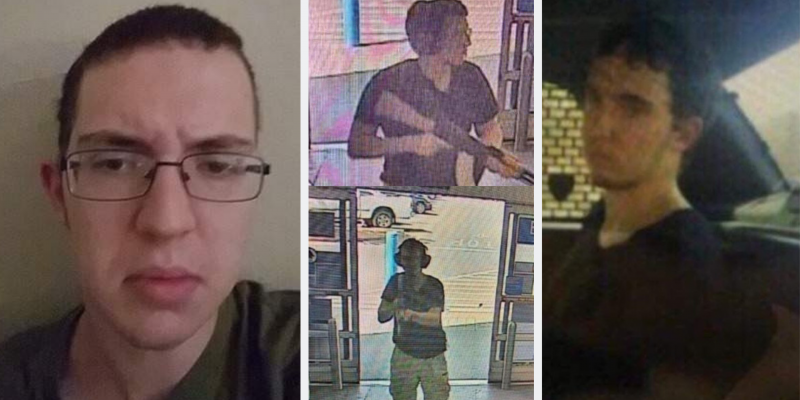 (left, the two people presented as the El Paso shooter)
The latest Deep State mass shootings and the associated hysteria are reminders that governments have a long history of sponsoring murderous attacks on innocent civilians. "Gladio" was a strategy of "creating tension" designed to make the public give up rights in exchange for government protection. This is being applied to the seizure of weapons in the US.
(from Aug 16, 2018)
https://wikispooks.com/wiki/Strategy_of_tension
(henrymakow.com) 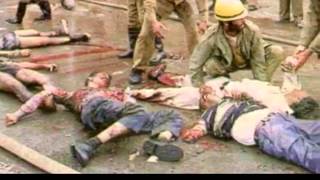 The strategy of tension is a method of social control involving a series of covert attacks upon a population, intended to promote stress and fear amongst them. The purpose is, by inducing a mistrust of one another and of the world at large, to increase child-like dependence upon perceived authority figures (such as national governments). The English phrase originates from the Italian (strategia della tensione), which was first applied to Operation Gladio in Italy.

"When you were on the Right you were not supposed to attack the State or its representatives. You were supposed to attack civilians, women, children, innocent people from outside the political arena. For one simple reason: To force the Italian public to turn to the State turn to the regime and ask for greater security. This was precisely the role of the right in Italy. It placed itself at the service of the State which created a strategy aptly called the "Strategy of Tension" in so far as they had to get ordinary people to accept that at any moment over a period of 30 years, from 1960 to the mid eighties a State of emergency could be declared. So, people would willingly trade part of their freedom for the security of being able to walk the streets, go on trains or enter a bank. This is the political logic behind all the bombings. They remain unpunished because the state cannot condemn itself."

The methods used are most obviously illegal and violent i.e. assassinations, kidnapping, paramilitary operations but also include propaganda, economic sanctions, support of civil unrest, fake grassroots movements, promotion of disruptive memes or technologies and the escalation of formerly peaceful protests by use of agents provocateurs. These are typically carried out under a false flag and combined with disinformation and use of enemy images to demonize uninvolved third party. If state agencies engage in staging or promoting acts of terrorism the term "state terrorism" is used, e.g. by former German chancellor Helmut Schmidt.[2]

The strategy of tension operations are potentially disastrous if uncovered, so require a high level of secrecy to afford their perpetrators plausible deniability. To be effective, they must be sustained, and they are therefore the preserve of intelligence agencies, the military or national governments. Organizations used are infiltrated and controlled but not directly affiliated with their controllers (e.g. Propaganda Due, Ordine Nuovo, ISIS, ...). Nevertheless, some government-backed strategies of tension have been uncovered since WW2.

The PsyOp component of a strategy of tension

The main target of a strategy of tension is the public opinion, to manipulate votes, created a casus belli to legitimate a war, to call for a strong leader or roll out mass surveillance and denounce peacemakers as 'unpatriotic'. False flag terrorist attacks are just the tip of the iceberg of possible measures to achieve these goals.

In "Interdoc and West European Psychological Warfare", Giles Scott-Smith puts the strategy of tension in a broader context.

"Ultimately, Interdoc's value comes from it being a remarkable example of the way European security services sought to engage with and manipulate the public sphere, initially out of serious concerns for the effects of peaceful coexistence on Western ideological solidity, and eventually as a means to secure a strategic advantage in the Cold War."
Giles Scott-Smith (2011)  - [3]

"Peaceful coexistence" refers to the Russian policy after Stalin, meaning the absence of a Soviet threat.

Based on official statements he shows that prolonged periods of peace are seen as a threat to Western power structures, the established order and political 'stability' by the establishment. The proposed 'solution' to this is - in the propagandists phrasing - to "raise awareness" of external threats or to "encourage a responsible citizenry as part of the process of maintaining a democratic society". The result may be called fine-tuning of democracy and included staged terror attacks under a false flag in the past. 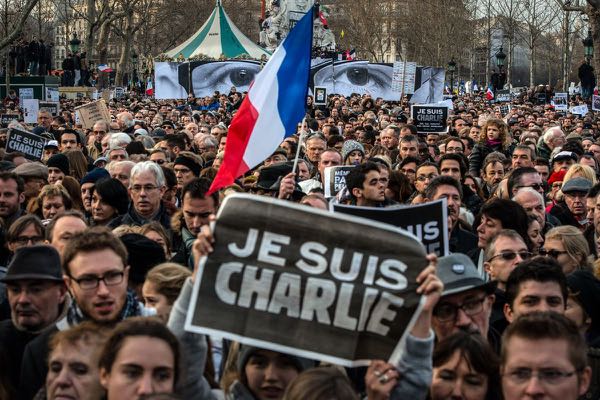 The same rhetoric is put forward by the Joint Statement of European Ministers of the Interior after the Charlie Hebdo terrorist attack:

"In order to tackle the root causes of radicalization ("Radicalization" refers to a value shift towards fovouring a more equal distribution of wealth) in particular of young people, the EU should consider strengthening targeted actions designed to raise awareness and promote the respect of fundamental rights and values"."
European Ministers of the Interior (2015)  - [4]

"Ultimately, Interdoc's value comes from it being a remarkable example of the way European security services sought to engage with and manipulate the public sphere, initially out of serious concerns for the effects of peaceful coexistence on Western ideological solidity, and eventually as a means to secure a strategic advantage in the Cold War."
Giles Scott-Smith (2011)  - [3]

The extraordinary need for attachment and protection in the face of danger may explain why there is so little public outcry when false flags are made public. The ambivalence and confusion when protective figures are simultainously a source of terror

"lead to hyperarousal states for which the memory can be state-dependent or dissociated, and this memory only returns fully during renewed terror. This interferes with good judgment about these relationships." Bessel v.d. Kolk [5]

Thus the idea that parts of a democratic state may be involved in acts of state terrorism may be split off and denied as a psychological defense of basic beliefs.

Recognizable patterns include, but are not limited to:

Comments for "Mass Shootings Follow the Gladio "Strategy of Tension" "

The MSM has really got the public going on all this mayhem. A motorcycle engine misfire in Time Square a couple of days ago was mistaken for an automatic weapon by a paranoid crowd. I'm waiting for them to blame President Trump for not passing a new motorcycle muffler law.

This unfortunate event in El Paso has turned into free campaign advertising for Beto O'Rourke. I still can't figure out why the alleged lone gunman went all the way to El Paso to do what he did. Texas is a well-integrated bilingual state. Hispanic immigrants are not limited to El Paso only. I don't believe the MSM scenario on this crime either.

Unfortunately this incident has not been blamed on the shooter or the gun but on President Trump exclusively. White voters who support President Trump are now being peddled by the MSM as white nationalists. It's no longer OK for White America to believe in their flag or their president.

You knew that once the MSM started these attacks on President Trump that they would eventually be targeting his voter base also.

The mention of created tensions has always been on m mind since I will remind you that:

My Toronto Street News has undergone the victimization of four arson attacks whereby myself with my car blown up almost making me into a melted marshmallow and three of my workers burnt out of their homes, two attempts to kill/injure me with a remote-controlled-driverless vehicle and once on foot by the same red Mini with white top having occurred.

Plus highly organized threats, media smears, threatened advertisers, etc. In spite of fire marshals and insurance companies doing extensive investigations there was never a cause of these fires understood to have occurred. Local police are reluctant to investigate higher-ups and drop their notebooks and run away when I name persons of authority as "enemies".

I used to think to blame and name the usual zionists but I have my suspicions that another government outfit not necessarily influenced by zionists is responsible as there has been no further investigation of our troubles. In fact, I have come to realize that CSIS spends vast sums and possesses sophisticated weaponry as well as paying people who falsely befriend myself and close associates.

I have also seen a local Toronto Star zionist reporter's attempt to expose higher up CSIS operations -- an inner group immune to zionist directions. In earlier years this same reporter not at the Star at the time exposed the fact that the CSIS operator opening Ernst Zundel's mail was instructed by his higher-ups in CSIS to not open packages because CSIS knew bombs were being mailed to Zundel.

Upon the imminent death of my mother that I protect I am afraid "they" will approach me anew upon my return to Toronto. So be it. My 19 year as Toronto Street News.

In connection with Wikispooks presentation of Strategy of Tension, it consistent with Blade Runner predictive programming we see everywhere today.

All of which is consistent with the genocidal Kalergi plan to destroy the indigenous nations and peoples of Europe. https://sovereignwales.com/2016/09/20/the-genocidal-kalergi-plan-to-destroy-the-indigenous-nations-and-peoples-of-europe/

The same plan is aimed to destroy America too. First, we have 9/11 False Flag. Next George W. Bush announces a 30 Years religious war against Islamic countries of Asia, Middle East and Africa which, in turn, triggers mass migrations to Europe and to America to CORRUPT the cultures of Caucasians in Europe and North America. If we notice and object, weâ€™re called racists, Nazis, etc.

None of this is accidentalâ€¦