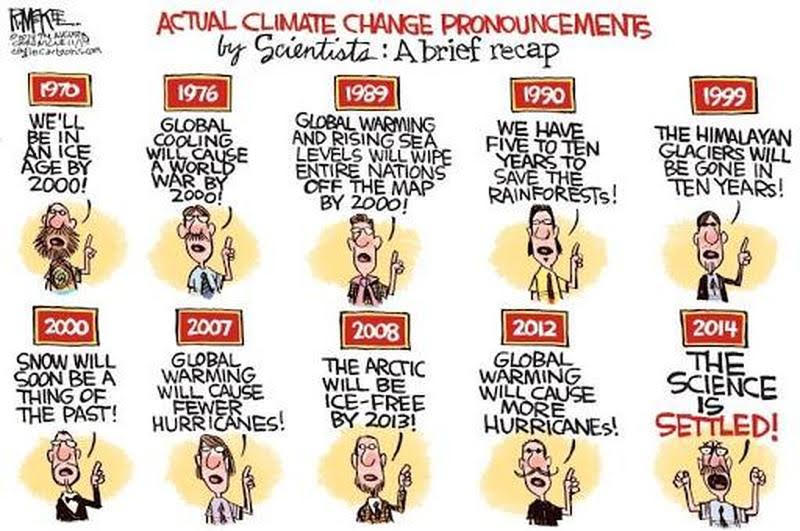 Due to Illuminati control of media and education, young people are not exposed to statements of credentialed scientists, exposing the 'climate change emergency' as a hoax.
Young people are not being told about all the long history of 'climate disaster' predictions, that have turned out to be laughable and totally wrong, despite coming from 'scientists' - 'Dozens Of Failed Climate Predictions Stretch 80 Years Back'

by Brabantian
(henrymakow.com)
Recently, 500 scientists wrote to the United Nations declaring that "There Is No Climate Emergency ... there is no cause for panic and alarm ... There is no statistical evidence that global warming is intensifying hurricanes, floods, droughts, and suchlike natural disasters, or making them more frequent."
https://www.breitbart.com/environment/2019/09/24/500-scientists-write-u-n-there-is-no-climate-emergency/#
In the 1960s-70s, it was not 'global warming' but 'Ice age coming!', that was the official scare of 'scientists' ... A 1979 TV commercial with Leonard Nimoy, Mr. Spock of Star Trek, warning us how hundreds of millions could freeze to death in the time of viewers' grandchildren:
https://www.youtube.com/watch?v=mOC7ePWCHGk
Co-founder and former president of Greenpeace, Patrick Moore, says that climate change is a "complete hoax and scam" ... John Coleman, the late Weather Channel founder, called global warming "the greatest scam in history":
https://www.express.co.uk/news/clarifications-corrections/526191/Climate-change-is-a-lie-global-warming-not-real-claims-weather-channel-founder
AccuWeather founder Dr Joel Myers supports the 'denialism' too:
https://www.accuweather.com/en/weather-blogs/realimpactofweatherwithdrjoelnmyers/throwing-cold-water-on-extreme-heat-hype/70008963
So does Jeremy Corbyn's scientist brother, Piers Corbyn:
https://metro.co.uk/2019/06/21/jeremy-corbyns-brother-claims-man-made-climate-change-not-exist-10025291
'Dozens Of Failed Climate Predictions Stretch 80 Years Back':
https://www.theepochtimes.com/dozens-of-failed-climate-predictions-stretch-80-years-back_3096733.html
One turning point for many, was the 2009 'ClimateGate' scandal at the University of East Anglia, when a release of internal e-mails which showed scientists eager to deceive to get more 'global warming money', with "practices that range from bad professionalism to fraudulent science. Bias, data manipulation, dodging freedom of information requests, and efforts to subvert the peer-review process were uncovered."
https://www.masterresource.org/climategate/climategate-trump/
Climate change scientist & his wife, taking in $750,000 per year, tried to harass climate denialists with legal charges:
http://www.climatedepot.com/2015/09/20/update-leader-of-effort-to-prosecute-skeptics-under-rico-paid-himself-his-wife-1-5-million-from-govt-climate-grants-for-part-time-work/
"Climate change is a hoax led by the United Nations so that it can end democracy and impose authoritarian rule ... global warming was merely a 'hook' to install the NWO new world order"
- Maurice Newman, advisor to 2013-15 Australian PM Tony Abbott
https://www.smh.com.au/politics/federal/climate-change-a-unled-ruse-says-tony-abbotts-business-adviser-maurice-newman-20150508-ggwuzt.html