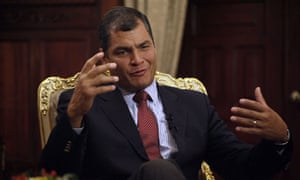 (Rafael Corea, 56, President of Equador from 2007-2017)
Rafael Corea is a Crook; All Socialists Are
by Marcos in Sao Paulo, Brazil
(henrymakow.com)
Rafael Correa is a communist and a corrupt thief, Henry. Educated in a Jesuit school, with ties to Jesuits in Belgium. A disciple of elite frontman Stiglitz, educated in the US. He took millions in bribes from Brazilian construction company Oderbrecht, the one which was used by Lula to finance the leftist revolution in Latin America. He also sold a huge part of the rainforest to the Chinese and went to the IMF for money. Also, he was a partner of Chavez and an ally of the narcoterrorists from FARC. Former president of the Unasur, the communist Latin America Union of Communist Republics. Same old Cloward Piven strategy: distribute subsidies and grants until you consolidate power and become a dictator before the State goes bankrupt. Sometimes it works, such as in Venezuela, sometimes it doesn't.
Now Moreno has to deal with the consequences.  Remember that the Indians hated Correa. Everybody in Latin America knows who he is. I am amazed at how people in the US and Canada who say they hate Hillary, Alexandria Cortez, Trudeau, and Bernie Sanders cant see that people like Correa are exactly like them. Is it because if the exotic factor?
All Latin American leftists are crooks, with no exception. Take it from me, I see it every day. Correa was selling the country to China, and he was together with the Forum of Sao Paulo mafia, stealing billions of dollars while pretending to help the poor.
I found some links:
Even El Pais a Marxist newspaper, acknowledges Correa was bribed by Odebrecht, the Brazilian construction company used by Lula to fund leftists all around Latin America. His election expenses were paid by Odebrecht. https://brasil.elpais.com/brasil/2018/09/12/internacional/1536727230_139250.html
Correa was sending oil for peanuts for China and Ecuador had $2 BI in losses. (imagine the bribes he got) https://periodismodeinvestigacion.com/2018/10/15/el-mas-grande-atraco-de-la-historia-de-ecuador-la-investigacion-que-revela-los-negociados-de-rafael-correa-con-china/
Ecuador is bankrupt not because of the IMF, but because it owes $ 6,5 BI to China and can't pay them back.
https://www.latimes.com/world/la-fg-ecuador-loans-china-20181210-story.html
The Forum mafia is such a huge story but nothing is said in the international media. The former leftist president of Peru (and three before him) was also getting bribes from Odebrecht. The new President that shut down the corrupt Congress and Supreme Court now has 79% support from the population. People are tired of Marxist lies. When I say Venezuelan people would welcome an American invasion to get rid of Chavez, it is true.