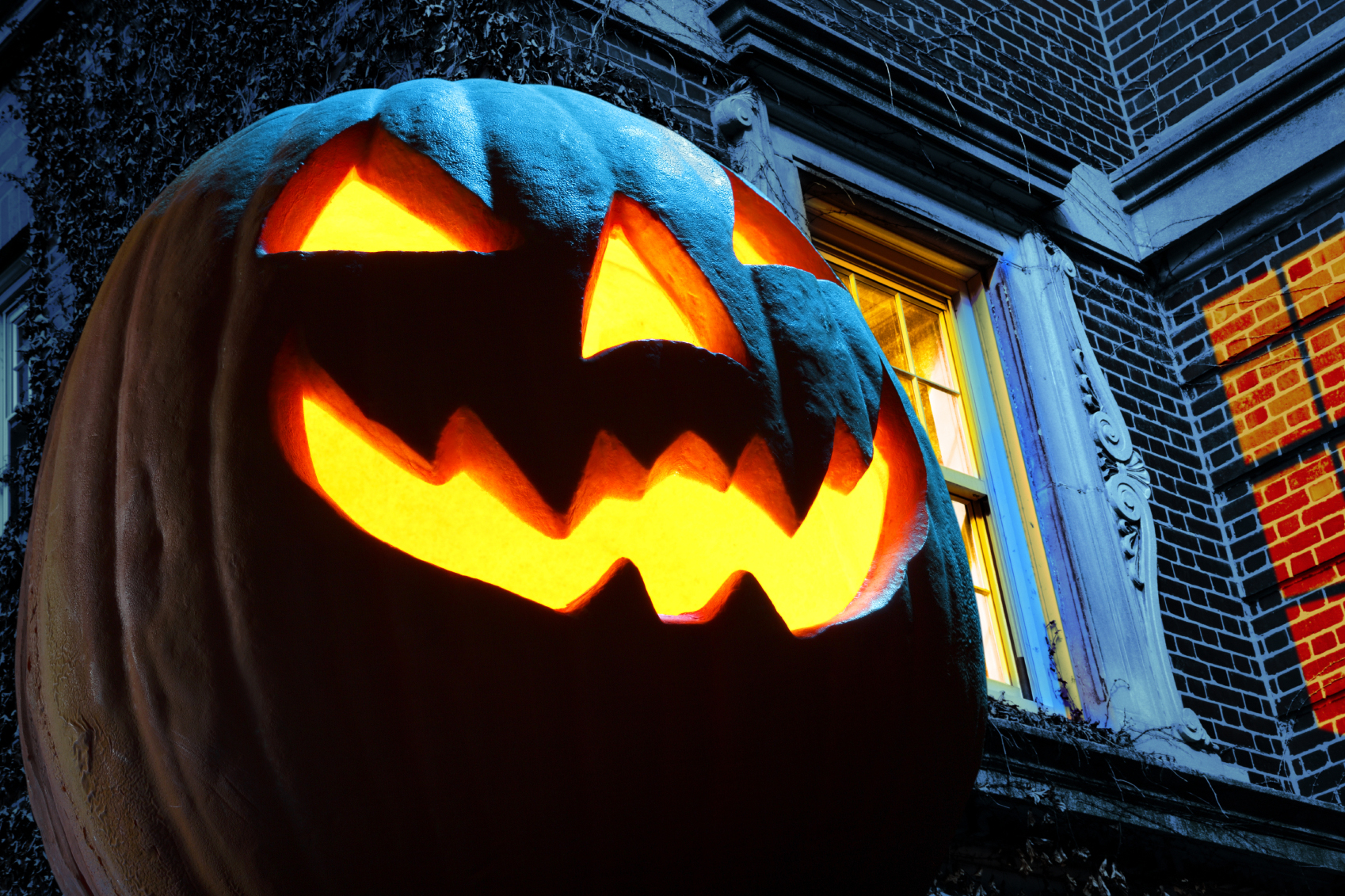 "This is a special day for darkness, and it shouldn't be treated as a game, like I did. It is a demonic celebration used as a tool to gain souls for hell....

Arias urges that Christians, instead of celebrating the satanic pagan high day of Halloween, "read the Bible; teach your children about the Church; donate something to the poor."

19 reasons not to do Halloween, a Satanic 'holy' day
By Dr. Eowyn
(abridged by henrymakow.com)

"it is a wretched, horrible holiday that celebrates the darkest side of humanity, and it is deeply rooted in ancient pagan traditions that would get people thrown in prison if they attempted to duplicate them today. With each passing year, the sexually suggestive costumes being marketed to our young girls become even skankier, the horror movies become darker and even more demonic, and the number of Americans that participate in occult ceremonies just continues to grow. In fact, it has been estimated that the number of self-identified witches in the United States is doubling every 30 months. Those that are deeply into the occult take this holiday very seriously, and the dark forces that they are dealing with are very real. So no, I don't want anything to do with this festival of death."

Below are Snyder's 18 reasons why he doesn't celebrate Halloween, followed by reason #19, an account by a former Satanist:

1. Halloween celebrates death, witchcraft and the occult, all of which can open up a door for demonic activity.

4. Little girls as young as three years old are being dressed up in sexually provocative costumes, grooming them for what?

5. Dressing up little children as ghosts, demons and vampires is not innocent fun. In recent years, there has been a trend to make costumes for children as hellish as possible.

6. Did you know that the original purpose to dress up in costumes on October 31 was "to change the personality of the wearer to allow for communication with the spirit world"? For 11 years in a row, dressing up as a witch has been the number one costume choice for adults in the United States.

Note: No wonder the number of self-identified witches has skyrocketed in recent years, from 8,000 in 1990 to 340,000 in 2008, a year that also found roughly 340,000 self-described Pagans. Currently, nearly one million Americans identify themselves as Wiccans or Pagans. (See "Thousands of witches to put a hex on Justice Kavanaugh, Oct. 20")

7. In ancient Britain, the festival known as Samhain was celebrated on October 31 -- a day when dead souls are believed to revisit their old homes. Personally, I don't want anything to do with contacting the souls of the dead.

8. According to the History Channel, Samhain was also the day when the Druids "gathered to burn crops and animals as sacrifices to the Celtic deities," which should be anathema to Christians.

9. Samhain/Halloween is a high day for wiccans. Did you know that Wicca is the fastest growing religion in America? According to the American Religious Identification Survey, the number of self-identified Wiccans in the United States grew from 8,000 in 1990 to 134,000 in 2001 to 342,000 in 2008. According to The New York Post, some experts have estimated that the number of witches in the U.S. is doubling every 30 months, and that there may now be "8 million undeclared practitioners" of "the craft" in this country. At this rate, Wicca will soon become the third largest "religion" in America after Christianity and Islam.

10. Wiccans believe Halloween is the time when the veil between the living and the dead is the thinnest, and that on this day their god "dies" and is reborn every year on the Winter Solstice, which will be December 22 this year.

11. For the ancient Druids, the purpose of Samhain or Halloween was to ensure the return of the sun god, with human and animal sacrifices. According to occult expert Bill Schnoebelen:

Druids worshiped the sun god, called by names like Bel (Ba'al?) or Chrom. On October 31, they believed that he died and went into the kingdom of the dead, Anwynn. The purpose of Samhain was to insure his return. Even witches admit this involved human sacrifice.

Both animal and human blood were believed to be needed to resurrect Bel on Samhain. Human blood was believed to open the gates of Anwynn and released the spirits for a night. Thus, October 31 came to be associated with ghosts. This is not just history. Samhain is still celebrated by Pagans and is the most solemn ceremony on their "religious calendar".

12. To this day, animal torture and sacrifice are practiced on Halloween by occultists. Many animal shelters will not adopt out black cats during the month of October for this very reason.

13. The pagan holiday of Samhain was co-opted by Pope Gregory the First in 601 A.D. in an effort to "Christianize" existing pagan holiday and practices, rather than try to obliterate them. Thus, Samhain became All Hallows' Eve or Halloween.

14. The tradition of "trick-or-treating" in costumes and masks is also one of those existing pagan traditions that was later "Christianized". The ancient Druids believed that Halloween was a night when mischievous and evil spirits roamed freely and could play tricks on the living. To allay them, villagers would pacify the ghosts with a banquet-laden table. At the end of the feast, masked and costumed villagers would parade to the outskirts of town leading the ghosts away. The masks and costumes were to scare away the ghosts or to keep from being recognized by them.

15. The tradition of carving out a "Jack-O-Lantern" also comes from paganism. According to wicca.com, turnips were hollowed out and carved to look like protective spirits, for this was a night of magic and chaos when the Wee Folke became very active, pulling pranks on unsuspecting humans. Traveling after dark was not advised. Bill Schnoebelen explains that pumpkins eventually replaced turnips, but the meaning remained the same:

Here it's a pumpkin, but in Europe it was often a turnip, or a skull with a candle in it. This serves two symbols, 1) the lord of the Dead, a "god" just like a Buddha - in short, an idol. 2) The fearsome face represented the god, Samhain, who would drive off less powerful demons that night. The lights in the Jack-o-Lantern symbolize the "faery fires" or "Will'o the Wisps" which were believed to be the lost souls flitting through the night. They also hearken back to the huge Samhain "balefires" which were lit to help conjure back the god from the darkness.

16. On all Satanic "holy" (a oxymoron!) days, including Halloween, children are ritually abused. This has been documented repeatedly, and yet most people (including most Christians) don't want to hear about it.

17. For Satanists, Halloween is one of the most important celebrations of the year. On page 96 of the Satanic Bible, Anton LaVey wrote that "After one's own birthday, the two major Satanic holidays are Walpurgisnacht (May 1st) and Halloween."

18. The Scriptures command us in no uncertain terms to refrain from paganism and witchcraft. Deuteronomy 18:9-13 says: "When you enter the land the Lord your God is giving you, do not learn to imitate the detestable ways of the nations there. Let no one be found among you who sacrifices his son or daughter in the fire, who practices divination or sorcery, interprets omens, engages in witchcraft, or casts spells, or who is a medium or spiritist or who consults with the dead. Anyone who does these things is detestable to the Lord". Halloween, however, as explained above, was and is a pagan festival, as well as a major Satanic holiday.

19. A former satanist named David Arias said "it's no coincidence" that his descent into occultism began with attending a rock concert on Halloween when he was 18 years old:

That beginning led to "underground parties" in empty warehouses. There was rock music, drugs and secret rituals in "special places" of the warehouse. The organizers downplayed the rituals, trying to make them seem normal, but they were actually Satanic. Evil was being invited into the bodies and souls of the unsuspecting partiers.

Through these parties I got deeper into the dark world of Satanism. I learned that Satan wants to be like God, so he requires sacrifices to be offered to him. The most basic and common sacrifices were of animals. I participated in these and other evil rituals for almost four years, but I could not bring myself to kill a human being, which is required to make it to the highest . . . level of Satanism.

The easiest way to kill someone is through abortion because the baby has no defense. You can kill babies anytime you want in this country, as long as they're still inside the womb. We had an abortionist in our group who knew exactly what abortion was about: sacrificing innocent lives to Satan. Abortion is an anti-sacrament.

Now we know why the Democratic Party chose this Halloween to vote on the procedures for their impeachment investigation against President Trump.

Comments for "Halloween -- 19 Reasons to Reject This Satanic 'Holy' Day"

When I was in grade 1 many years ago I remember other kids bobbing for apples, drooling their gob struggling in giant bowl as the teacher smiled. When the teacher tried to get me to do it, I refused. I didn't want an apple that bad. Halloween is worse than I thought; In
Britain long ago, Druids used to spare 12 people out of the giant wicker man they were going to burn to death, to instead watch to see if they could bob apples out of boiling hot cider without burning their face off.

never liked Halloween even as a kid. It was cold in Colorado, and I couldn’t see the point of cutting some holes out of an old sheet my Mother said I could use and then covering most of it up with my winter coat. One especially anticlimactic year my best friend’s mother decided

To take control with a “party” where we all sat formally around the dining table with plates of sugar and mugs of hot chocolate. Hot chocolate by

Itself would be a treat coming in out of the cold normally, but with the plates of sugar and what we had already ingested from our sacks of goodies

It could only trigger a stomach-turning effect. I preferred being in my own living room with my big brother and sister as we pawed through our stuff. In later years I have only mumbled “don’t like the color combo” black and orange don’t do anything for me.