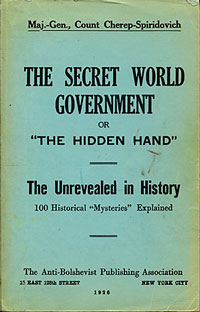 A reader takes issue with the statement that many Illuminati Bloodlines are Not Jewish
"There are over 300 Luciferian bloodlines and many are not Jewish." ???
Not according to Major General Count Cherep-Spiridovich's book "The Hidden Hand":
(From "Asiatic Lion")
A Jew, Sir Alfred Mond, the ex-Minister of Health of England, in his English Review, in "The World Battle of the Jews," proved, that the stupid Gentiles are between the Jewish anvil, Capitalism, and the Jewish hammer, Bolshevism, well co-ordinated.
"Nothing would constitute a more needless and base betrayal of civilization than the recognition of the Bolshevik tyranny. The policy of American-Anglo-German bankers is the most dangerous element in the whole chain of pro-Bolshevist efforts. The Bolshevist funds amount to millions."(Mr. S. Gompers, in The Chicago Tribune, of May 1, 1922.) Not one single American asked him to explain, who are those "American-Anglo-German" bankers and why they are allowed to basely undermine the American Government? However, the three above enlightening statements prove, that the 300 men of the Hidden Hand are controlling the assault of both Jewish Finance and of Jewish Bolshevism against Christendom...[page 44]
"The Kaiser and Bethmann-Hollweg were quite optimistic in believing that the conflict (Austro-Serbian, July 1914) could be localized and that the solution could be left to Austria and Serbia (Dr. Paul S. Reinsch in his "Secret Diplomacy," on p. 104). No! The Kaiser was deceived, but Bethmann-Hollweg-Roths-child knew perfectly well, that he was deliberately pushing events towards war and ruin.* As a Rothschild, he was one of the "300."...[page45]
Baron Edouard A. Rothschild V. is today the "Uncrowned Ruler of the World." He controls the 300 men of the Hidden Hand, $300,000.000,000 and 90% of the World's press. Most of the "statesmen" are his obedient valets!...[page48]
According to an old wise proverb, the Rothschilds and their 300 Jewish Vice-roys are "as mean and treacherous as cats and as cowardly as rabbits."...[page53]
"He lived with learned men," said Disraeli of his father, who again returned to England in 1788. These were the "Illuminati" and the "Learned Elders of Zion" or the "300 men."...[page106]
Soult has since always shown extreme attention to Mrs. Bis-marck-Menken and to her son, the future "man of Blood and Iron." * A Jew and one of the "300" of the Hidden Hand, Soult occupied the highest posts in France until his death in 1851 and betrayed every Christian ruler.[page108]
In the N. Y. Evening Post, June 16, one S. B. Conger deceives us by saying that Bethmann-Hollweg-Rothschild was "an unfortunate, but well-meaning blunderer." No, the lie started this war as one of the "300". He read in his Talmud the "Kol Nidre" teaching that vows and oaths are not binding ona Jew, and said it. This raised the "scrap of paper" scandal...[page185]
We must daily remember CHRIST'S words and fight HIS foes Let us listen not to the "300" or their valets (whom I have made known), but to one, who dares openly accuse Satanism-Bolshevism,and whom 300,000,000 Catholics regard as the Vicar of CHRIST. Pius XI appealed to "all right-thinking men to combine infighting Bolshevism"(N. Y. Times, Dec. 19, 1924.)..[page189]
All this talk about "peace" and the Jewish League of Nations World Courts, "Outlawing Wars," "War to End War," etc., are Jewish tricks to "fool us regularly" (as W. J. Bryan said) and"to keep us busy."The only way of salvation is the trial of the Hidden Hand. How to start it. Summon to Court any one of the "300"...[page191]
The Jews are being held responsible for the crimes of the "300" about whom most of them profess ignorance. Mass pogroms are imminent unless the "300" are tried. Jews and friends of the Jews should urge their trials. When the Jews shall renounce their Talmud, which teaches:"Kill the best Gentiles"; when the daily"bleeding white" of the Aryans** by the Hidden Hand shall cease; then we can open our arms to the Jews..
Only, the restoration of a Romanov Czar,' would make impossible a Japanese assault upon the U. S. and its "Bolshevization" by the "300". All this could be attained, if a few million were spent in spreading the truth and proving, how right is CHRIST...[page193] )
https://ia600708.us.archive.org/6/items/TheSecretWorldGovernmentOrHiddenHand/13065735-The-Secret-World-Government-or-The-Hidden-Hand-The-Unrevealed-in-History-Paperback.pdf