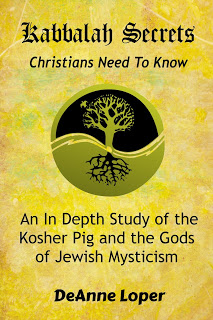 A very personal review
by "M"
(henrymakow.com)
Deanne Loper did us all a great favor in compiling the information in her book "Kabbalah Secrets Christians Need to Know."  I didn't find it an in-depth study of the Kosher Pig which it claimed to be, but it did show us the vain thinking and the imaginary gods so rife in Apostate Judaism today.  I have no idea what the Kosher Pig is, but assume it's just another nasty, demeaning name for Jesus or His people, as the premise is that the Kosher Pig will come back to be reconciled to Judaism.
She exposes many vain postulations, such as that Jesus Himself will one day depart from His own church to come back under Judaism and turn about and destroy His church.  Wild imagination, that!  But this is just one of the many examples she shares with us as she delves into these strange and irresponsible assumptions.
Since they do not obey or understand the ways of God, they resort to other means of expression and thought, creating a mishmash of ideas; i.e., things are so just because they say they are!  I have read that their seeking "deeper" levels of meaning in the Scriptures, or obscure and esoteric "codes" in them, is simply so that they can excuse and then flout their own non-conformity and disobedience to the Word of God, thereby becoming free of it and from God's Lordship in their lives.
The premise of her book is that apostate, antichrist Jewry claims that Christians will be led to apostasy through the teachings of the Zohar and the Kabbalah and that these will deny Jesus Christ en masse and come back into the fold of the old Jewish practices, which include bondage to the law, having to fulfill it to the letter, and to participation in animal sacrifices.
I did find that there was some seduction in these teachings, but seduction is only a spirit and it can be withstood.  We are warned about seducing spirits and doctrines of devils.  These are surely doctrines of devils because they do not line up with the Word of God.  We know that God's Word is true and that it is the plumb line for measuring truth, because that is what Jesus said it was.  "Sanctify them in thy truth.  Thy word is truth."  John 17:17  If any teaching or construct does not line up with God's Word, it is not true or tenable.  This is our means of discerning truth and error in the world.
What I did find is that there is absolutely no correlation between the Word of God and the Zohar and the Kabbalah.  They do not speak the same language or engage in the same concerns.  The Zohar and the Kabbalah have no remedy for sin and do not discuss it.  They simply say that there is a divine spark in everything, including evil, and that all these divine sparks need to be reconciled back to God.  BUT HOW?
The Jewish mystics of the Zohar and Kabbalah suggest this will be done BY THE WORK OF MEN, i.e, themselves, in first regathering national Israel and then in dominating the world with the Noahide laws; that they will create the format for reconciliation with God by their own efforts and by their own rules and domination and then present the world back to God.  Good luck with that, Gentlemen!  This flies in the face of the totality of God's Word which suggests that this is an impossibility due to man's inherent sin.  There is no Sin-Bearer in apostate Judaism.  There is no Sin-Bearer in any man-made religion; it remains a Christian concept alone.
Only Christianity out of all the religions on the earth has a remedy for man's sin. Our Holy God Who cannot abide sin in any form will not accept into His bosom those who have not come to Him by the Purifying Blood Sacrifice of His Lamb.  His Word says that there is no forgiveness without the shedding of blood.  There is no other way back to The One True God than the way that He provided us, through the substitutionary death and resurrection of His Only Begotten Son, and faith in That One's Work on His cross as our Great Sin-Bearer.  God gave a Great Price for our ransom.  He wants His Son respected for what He did for us all.....
That the thoughts and concepts of the Zohar and the Kabbalah are foreign to Israel is obvious.  Nothing matches up to the Old Testament and certainly not to the New.  God calls earthly Jerusalem both Sodom and Egypt in the Book of Revelation.  He seems to know from where her anomalies have sprung.  That Israel did not stay true to God in her long history is a fact.  Nevertheless and in due time, the Promised Savior came, just as foretold in God's Word.  HE WAS TRUE TO HIS PROMISE AND THE FULFILLMENT OF GOD'S PROMISE CAME INTO BEING.  We can count on His Word is true for the many times throughout history it has been explicitly fulfilled.  God's track record is 100% accurate up to this point.  Most of us, knowing His character and goodness, know that ALL that He has decreed will come to pass in its proper time.
Ms. Loper did inform us that there is now in existence The Israel Bible which contains no references to Jesus Christ, but that is in keeping with this apostate world view.  Unfortunately, it is not at all in keeping with the True and Eternal Word of God.
We know who wins, and we can read His story from the beginning of the Book of God to the end of it.  Jesus is Lord, King, and Total Victor!  We just aren't on the last page of the book yet!