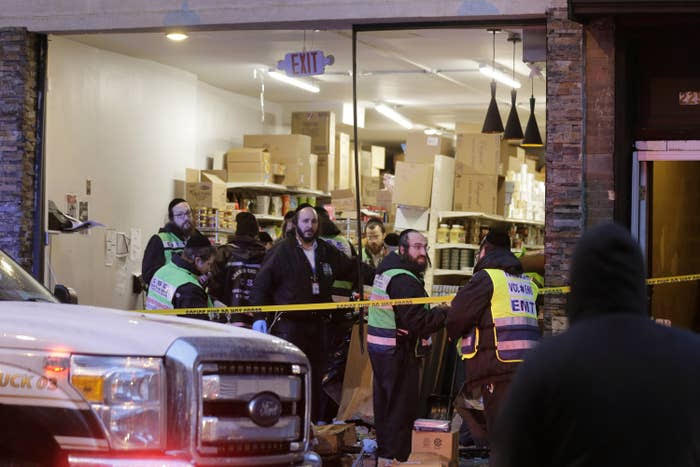 The hours-long gunfight drew federal as well as local police officers, who then, astonishingly, quickly turned over the crime scene with its evidence, to the control of the local Jewish 'shomrim' neighbourhood watch patrol ... here you see these Jewish security amateurs stomping all about the shot-up kosher market.
It's only news if it can be made to fit the Cabalist (Communist) agenda.
by Brabantian
(henrymalow.com)
On December 10, a spectacular hrs-long gun battle took place, most of it at the Jewish JC Kosher market in Jersey City, New Jersey USA. A witness said the shooters came "ready to kill."
Palestinian-American USA Congresswoman Rashida Tlaib, at first tweeted the Kosher Market shooting attack was another case where "white supremacy kills", even though the attackers were quickly identified as black ... the theory being that it is whites who have created the 'killing culture', and can always be blamed even if no whites are involved
https://www.algemeiner.com/2019/12/12/rashida-tlaib-blames-white-supremacy-for-nj-kosher-supermarket-killings/
Six were reported dead include the Orthodox Jewish store co-owner and her cousin; an Ecuadorian store employee; a police officer killed earlier that day; and the alleged shooters, a 'Bonnie & Clyde' black couple, David Anderson & Francine Graham. 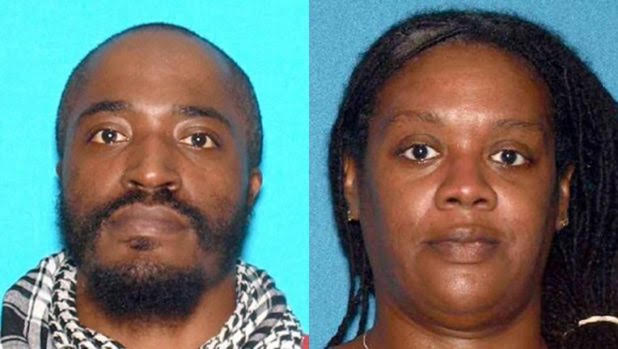 Anderson & Graham are associated with the 'Black Hebrew Israelite' movement, which holds that blacks are the true Jews of the bible, whilst 'Jews' as most people understand them, are  impostors, joining with whites historically to enslave & abuse black people.
Remarkably, less than 90 days earlier, Hollywood released a film, 'The Day Shall Come', a semi-comedy about 'black Israelite' religious figures, who are being funded and manipulated by the American FBI, trying to induce the religious blacks into conducting terrorist activity ... the US national police seeking to create a 'false flag' attack, manipulating blacks who are portrayed as somewhat goofy. Film details and trailer video. 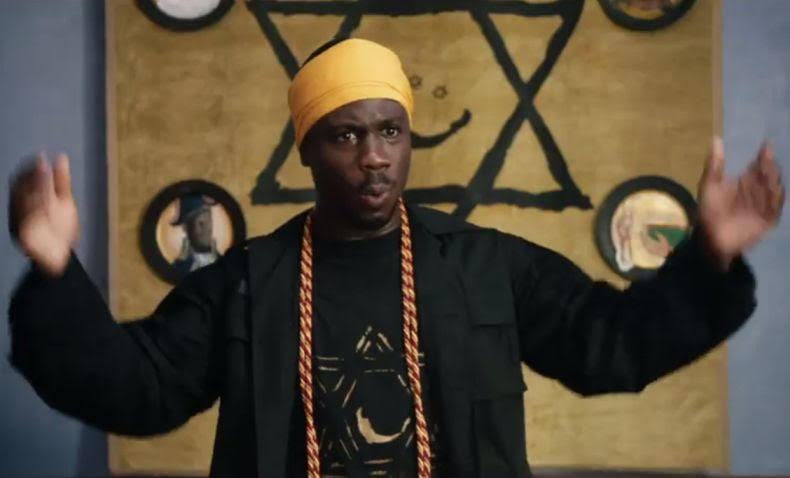 Here is a screenshot from the film, a 'fictional' black Israelite preaching & wearing a star of David
Aside from this 'predictive programming' Hollywood movie release weeks before the actual shooting - the movie even having the 'false flag' theme - things are quite unusual with the 'official story' of the kosher market shooting:
- Chabad New Jersey Chief Rabbi Moshe Shapiro, was reported as being in the kosher store when the shooting there began.
- One of the police officers shooting the perpetrators, was  reported to be a son of former NY Police Commissioner Bernard Kerik, a close partner of President Trump's close advisor Rudy Giuliani
- Early reports had more shooters, and shooters firing from rooftops
- The 'anti-Jewish terrorism' aspect of the story, was minimal at first, then grew ... later reports added how the shooters' vehicle parked outside the kosher market, had a 'manifesto', plus a bomb which didn't explode.
This kosher market shooting comes in a context of increasing black-Jewish tension in both the USA and Israel. In the USA media have begun to discuss an increasing spate of black-on-Jewish crime.
Conflict has arisen as groups of Jews sometimes quickly take over a poorer minority neighbourhood, taking advantage of low property prices; Orthodox Jews who dress the part are easily identified as they move about.
Blacks are increasingly aware of how the 'gangsta rap' etc music & film industry, glamorizing drugs & crime, is significantly Jewish ... and that such media may have been a wrecking ball for black community life
The 'Black Hebrew Israelites' with whom the shooters are associated, have, like the largely black USA Nation of Islam, tended to highlight evidence that Jews were significantly involved in the slave trade of shipping and selling African black people to whites in the Americas.
In Israel there is increasing tension with black African migrants there, and with blacks from Africa who claim to be Jews - often even keeping Jewish rituals - and who indeed may be descended from long-ago diaspora Jews who inter-married with black Africans.
The media has not quite known how to handle this intrinsically fascinating story at the New Jersey kosher market ... long gunfight sieges lasting some hours are exceptional, but all the more rare when involving a man-and-woman 'Bonnie & Clyde' couple ... If this scene didn't involve shooting Jews at a kosher market, the black female shooter here might have been made into much more of a media star, a new 'Angela Davis'.
The Jewish establishment itself, seems perplexed and torn. Outside of Israel, Jews generally promote migration of developing world peoples into Western nations ... but Jews are also complaining that many minorities seem less receptive to 'education on the holocaust and anti-semitism', in the same way that white people have been.
More than whites now perhaps, minorities can use their somewhat privileged position to more easily criticize Jews & Israel.
------
Related - Winter Watch - What Really Happened is Still Unclear
-------------------------------------------- Jewish Black Feud is Background to the Shooting
First Comment from Ken Adachi
Video clip only of the black shooters exiting the white van and entering the Jersey City kosher market.
https://www.liveleak.com/e/at8Q5_1576092974
This short video  clip reveals a  number of anomalies:
1. Notice in the UPPER LEFT corner of the screen, there is ANOTHER video scene running that SEEMS to be of  the same white van, but the camera view is seen PERPENDICULAR to the Driver's side. The  pace of movement of the two vans seem to be identical, but the street scene is DIFFERENT in the two videos. The  upper left video scene shows the white van crossing an intersection, while the larger video shows the white van APPROACHING an intersection, but pulls over and stops BEFORE the intersection.
2. The operator of this video camera ZOOMS in for a tighter shot at the 10-11 second mark, just as the male shooter exists the van. The operator of the video was obviously AWARE of what was about to go down and was zooming in for a tighter frame.
3. The location of this camera view is high, about the level of the top of the housings that contains the roll up steel doors in front of the stores,  and is in line with the driver side car-doors seen parked on the left side of the street scene. This can't be a surveillance camera mounted on a pole because of the second video scene in the upper left corner AND the zooming action at the 11 second mark. Is this camera mounted on a telescoping pole of a specially equipped van that was parked there and waiting for this scene to unfold - and be recorded?
4. WHO took this video?
5. WHERE is this camera supposedly located?
6. HOW did the police, Jewish people involved, and media OBTAIN this video?
7. From WHOM?
Text and video here:
https://www.liveleak.com/view?t=ChQTA_1576092996

This is a sad attempt by Rashida Tlaib to gain support from a voter base that she is not doing all that well with.

I've heard these kind of people even blame the Holy Bible itself for some of the problems of the world. These are the same people that call Christianity a "white man's religion".

Congresswoman Rashida Tlaib knows that criticising White America is always a safe bet with fellow Democrats and the MSM.

However, I don't think it will win her the support that she's hoping for.