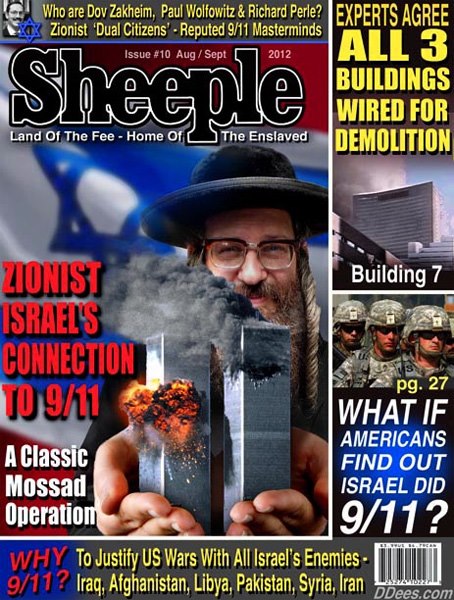 WikiLeaks document details Mossad orchestration of 9/11 including a flight from NY to Israel on 9/11 after all flights had been grounded. Israel is the enemy of the US. Any politician that is talking about Saudi Arabia and 9/11 is promoting a limited hangout meant to divert attention from Israel. By banning criticism of Israel, Donald Trump is officially complicit in the 9-11 murder of more than 3000 Americans.

British intelligence reported in February 2002 that the Israeli Mossad ran the Arab hijacker cells that were later blamed by the U.S. government's 9/11 Commission for carrying out the aerial attacks on the World Trade Center and Pentagon.

WMR has received details of the British intelligence report which was suppressed by the government of then-Prime Minister Tony Blair. A Mossad unit consisting of six Egyptian- and Yemeni-born Jews infiltrated "Al Qaeda" cells in Hamburg (the Atta-Mamoun Darkanzali cell), south Florida, and Sharjah in the United Arab Emirates in the months before 9/11.

The Mossad not only infiltrated cells but began to run them and give them specific orders that would eventually culminate in their being on board four regularly-scheduled flights originating in Boston, Washington Dulles, and Newark, New Jersey on 9/11.

The Mossad infiltration team comprised six Israelis, comprising two cells of three agents, who all received special training at a Mossad base in the Negev Desert in their future control and handling of the "Al Qaeda" cells.

One Mossad cell traveled to Amsterdam where they submitted to the operational control of the Mossad's Europe Station, which operates from the El Al complex at Schiphol International Airport. The three-man Mossad unit then traveled to Hamburg where it made contact with Mohammed Atta, who believed they were sent by Osama Bin Laden. In fact, they were sent by Ephraim Halevy, the chief of Mossad.

The second three-man Mossad team flew to New York and then to southern Florida where they began to direct the "Al Qaeda" cells operating from Hollywood, Miami, Vero Beach, Delray Beach, and West Palm Beach.

Israeli "art students," already under investigation by the Drug Enforcement Administration for casing the offices and homes of federal law enforcement officers, had been living among and conducting surveillance of the activities, including flight school training, of the future Arab "hijacker" cells, particularly in Hollywood and Vero Beach.

It was Olmert who personally interceded with New York Mayor Rudolph Giuliani to have released from prison five Urban Moving Systems employees, identified by the CIA and FBI agents as Mossad agents. The Israelis were the only suspects arrested anywhere in the United States on 9/11 who were thought to have been involved in the 9/11 attacks.

The two Mossad teams sent regular coded reports on the progress of the 9/11 operation to Tel Aviv via the Israeli embassy in Washington, DC. WMR has learned from a Pentagon source that leading Americans tied to the media effort to pin 9/11 on Arab hijackers, Osama Bin Laden, and the Taliban were present in the Israeli embassy on September 10, 2001, to coordinate their media blitz for the subsequent days and weeks following the attacks.

It is more than likely that FBI counter-intelligence agents who conduct surveillance of the Israeli embassy have proof on the presence of the Americans present at the embassy on September 10. Some of the Americans are well-known to U.S. cable news television audiences.

In mid-August, the Mossad team running the Hamburg cell in Boston reported to Tel Aviv that the final plans for 9/11 were set. The Florida-based Mossad cell reported that the documented "presence" of the Arab cell members at Florida flight schools had been established.

The two Mossad "Al Qaeda" infiltration and control teams had also helped set up safe houses for the quick exfiltration of Mossad agents from the United States.

Last March, WMR reported: "WMR has learned from two El Al sources who worked for the Israeli airline at New York's John F. Kennedy airport that on 9/11, hours after the Federal Aviation Administration (FAA) grounded all civilian domestic and international incoming and outgoing flights to and from the United States, a full El Al Boeing 747 took off from JFK bound for Tel Aviv's Ben Gurion International Airport. The two El Al employee sources are not Israeli nationals but legal immigrants from Ecuador who were working in the United States for the airline.

The flight departed JFK at 4:11 pm and its departure was, according to the El Al sources, authorized by the direct intervention of the U.S. Department of Defense. U.S. military officials were on the scene at JFK and were personally involved with the airport and air traffic control authorities to clear the flight for take-off. According to the 9/11 Commission report,

Transportation Secretary Norman Mineta ordered all civilian flights to be grounded at 9:45 am on September 11." WMR has learned from British intelligence sources that the six-man Mossad team was listed on the El Al flight manifest as El Al employees.

For Mossad, the successful 9/11 terrorist "false flag" operation was a success beyond expectations. The Bush administration, backed by the Blair government, attacked and occupied Iraq, deposing Saddam Hussein, and turned up pressure on Israel's other adversaries, including Iran, Syria, Pakistan, Hamas, and Lebanese Hezbollah.

The Israelis also saw the U.S., Britain, and the UN begin to crack down on the Lebanese Shi'a diamond business in Democratic Republic of Congo and West Africa, and with it, the logistics support provided by Bout's aviation companies, which resulted in a free hand for Tel Aviv to move in on Lebanese diamond deals in central and west Africa.

Then-Israeli Finance Minister Binyamin Netanyahu commented on the 9/11 attacks on U.S. television shortly after they occurred. Netanyahu said: "It is very good!" It now appears that Netanyahu, in his zeal, blew Mossad's cover as the masterminds of 9/11.

Comments for "Wikileaks Confirms- Israel Did 9-11"

I am highly in doubt as to whether they really believe that.
I suppose they know the truth deep down but find it easier to go with the flow. Its difficult to get someone to understand something when their job depends on them not understanding it.

We have people like 100% Zionist Jew, Michael Moore and his Fahrenheit 9/11 who have conveniently framed the Bush regimes very close ties to the Saudis & esp the bin Laden family as some kind of proof that they're behind 9/11 yet the stuff in the article above(and much more) is not mentioned as it it will point the fingers towards Israel. The craziest part is that theres SO MUCH of proof of Israels involvement that there shouldn't be anyone in doubt as to who was behind it and anyone who says otherwise exposes themselves as being either stupid or a Zionist.

Everyone who was ever involved in that event is guilty. It makes no difference whether they were Israeli, American, or European. People can't pin the blame on one individual or group. Researchers have been doing that with the JFK murder.

Just try to imagine if 911 happened under Presidents Trump's watch and not George Bush Jr. I would definitely say that would qualify for an easy impeachment from both houses of Congress at the very least.

There are so many unanswered questions concerning 911 that still haven't been answered and maybe never will in the near future because the narrative is controlled.

Also, not to mention the countless American soldiers who died and returned home with catastrophic combat injuries.

Someone once said that wars are started by lies and I don't think 911 was an exception to that rule.
Where are all the movies on 911? You'd think Hollywood would want to make some money of this tragedy and reinforce the authorized narrative. Why no movies on 911?

The people in Washington know exactly who is responsible but the courage crisis that exists there won't allow them to touch it.