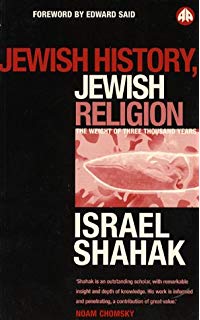 Judaism is a form of mind control
Can Jews be individuals and have principles?
by Peter S
Surely, that, must be   the ultimate "Jewish Question." What exactly, does it mean to be "Jewish" Can you have Jews without Judaism?  What is being Jewish without Judaism? Can you have a Hamburger without beef? Let us hear from Professor Shahak. He states of Judaism;
"Historically it can be shown that a closed society is not interested in a description of itself, no doubt because any description is in part a form of critical analysis and so may encourage critical 'forbidden thoughts'. The more a society becomes open, the more it is interested in reflecting, at first descriptively and then critically, upon itself, its present working as well as its past. But what happens when a faction of intellectuals desires to drag a society, which has already opened up to a considerable extent, back to its previous totalitarian, closed condition? Then the very means of the former progress - philosophy, the sciences, history and especially sociology - become the most effective instruments of the 'treason of the intellectuals'. They are perverted in order to serve as devices of deception, and in the process they degenerate.  Classical Judaism  had little interest in describing or explaining itself to the members of its own community, whether educated (in talmudic studies) or not. ............. The rabbinical authorities of east Europe furthermore decreed that all non-talmudic studies are to be forbidden, even when nothing specific could be found in them which merits anathema, because they encroach on the time that should be employed either in studying the Talmud or in making money - which should be used to subsidize talmudic scholars"  (Jewish History Jewish Religion: The Weight of Three Thousand Years By Professor Israel Shahak)
So, according to this learned professor, Judaism is  a form of mind control system, of  a closed society which bides its subjects to total mind control by the Rabbinate. So, if you are Jewish, it means that you have surrendered your mind to the control by the Talmudists. Any Jewish person who desires to have an individual life and his own principles have no choice but to denounce Judaism and even being "Jewish"
Meaning that  the term "a Jew who is an individual and with principles"  is a classic Oxymoron!  Judaism does not allow Jews to have independence of mind! Therefore to say that you are a Jew, and also an individual with principles is to be a fraudulent Jew or a fraudulent gentile. (Read, Marrano)
Makow Reply-  It's much more subtle. Cabalist Judaism is a mind control system that now extends to the West in general. Most Jews -- 90% --are secular and have no interest in the teachings of the Talmud or Cabala. They have never read them.
Related- Judaism is Template for Totalitarian NWO