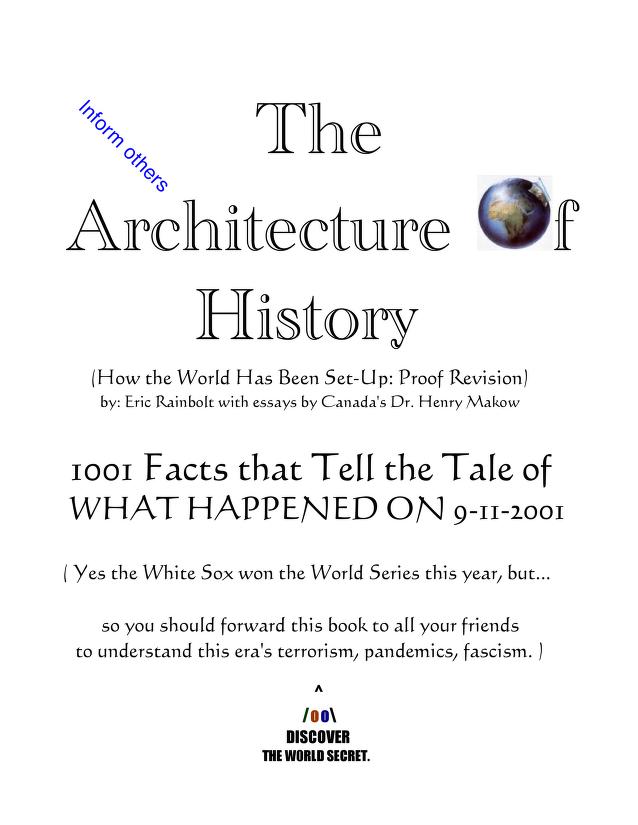 "Bill Gates says a deadly flu epidemic is one of the biggest threats to humanity. It could kill nearly 33 million people in 6 months."

History has been continuously littered with their serial patterning. Their symbols, and the over-use of 7, 11,13, and the triples, 21, 33, 39 are repetitively used beyond any shadow of any doubt.

Latest!   Recognize a false flag by the dates.

This is an example related to the new corona virus and how Freemasonic number coding is used, this time by Bill Gates, pandemic mastermind, boasting using master number "33", that it is soon coming: https://www.insider.com/deadly-flu-epidemic-biggest-threat-bill-gates-2018-learnings-2018-12 "Bill Gates says a deadly flu epidemic is one of the biggest threats to humanity. It could kill nearly 33 million people in 6 months."

This book should have been titled "COLOSSAL CONSPIRACY - The SERIAL PATTERNING of History and Terror - Proof positive that 911 was an 'inside job' between the USA, Israel, Saudi Arabia, the Illuminati class and the mass media".

It sums it all up better than any other thick and highly researched book on the topic. It was written way back in 2005 but that is far enough to prove 9-11, 3-11 (Madrid Train bombing), and 7/7 2005 (London Bus bombings) were all inside jobs to promote the war on terror. Simply look at the rest of history, and it overuse of the number 11 (i11uminati); the number 10 is most often not used and 11 is the most used number in referring to details of events or percentages, et al, in media headlines. 9-11 was the 11th year anniversary of a ''new world order' speech given in front of Congress on 9-11 1991 by the first treasonous Bush president.

So far it has been "God"'s will that 9-11 be covered up and persist as another successful deception by the I11uminati types (most billionaires and trillionaires).

We the People can only awaken to this by sharing this information, so a sort of mass public stance can correct the history books that have reported 'fake news' and 'fake history' such as 9-11. Until that point "We The People" will continue to get screwed in a variety of ways; those ways that independent media such as infowars have reported over time.

Do You not crave to know the real truth of matters?

The Science Channel (note not the History channel because it is a massive spin-job) just published on Christmas Eve December 24th 2019 a hour long special on the I11uminati with the conclusion that they are washed-up and "harmless".

This so called "New World Order" conspiracy is a COLOSSAL CONSPIRACY, it is world-wide and is controlled by the highest echelons of Freemasonry and the global elite. Even the World Trade Center was designed to be a massive "11" eleven. The neighboring UN building is 39 stories tall, three stacks of 13 floors. The World Trade Center was also meant to be an 11-multiple 110 stories tall. This psychopathic global serial patterning of their influence has been going on since World War I or beyond it back in time.

Perpetual warfare is the result. If you don't want war in the world, then most everyone would have to realize this is happening. God certainly knows about it, but because most people don't care, then it persists. That is one of the hardest points to digest, that [their God,] whose hallowed name is Louis (aka Lucifer), The Rex, The King is in favor of this Colossal Conspiracy of the Rich and well-to-do versus the poor. So very Sad but true. May HE stop protecting the conspirators, the filthy rich.

This coming war with Iran is just another chapter in in, killing innocents on both sides. Staged attacks, false flag attacks, by the Freemasonic I11uminati who are at the helm of power, owners and controllers of corporate media and the military and most every institution of power in this world pave the way for full blown warfare.

History has been continuously littered with their serial patterning. Their symbols, and the over-use of 7, 11,13, and the triples, 21, 33, 39 are repetitively used beyond any shadow of any doubt. They finance the governments of the world with unconstitutional fiat money. The are the masters of central banks, money, media, terror,and war. The continuously mesmerize the entire public with their ownership and control of most all of the print and broadcast media. The 4 flight numbers on 9-11 were 11, 77 ( 7 11s), 175(sums to 13) and 93, a reversal of 39, the triple 13. Flight 11 was flown into the 77th floor of North tower, WTC 1.That is how much they control things, even to such fine but epic details.

Controlling the world of finance is one thing, but terrorizing people and mass murder is the ultimate Sin and Mass Murder and justice for it should not be limited by the years passing or any statute of limitations.

They currently control the minds of mankind, and if they didn't maybe we can dethrone them and redistribute wealth and power more more fairly in a world no long at war with itself. Most everyone needs to wake up to the reality of their environment for that to happen. The top of the pyramid of power represents the biggest hoax and con job played against the 99.9% of the rest of mankind. They control the militaries in their dishonor against the public with all this falsely started warfare. They stage events to get the public to accept perpetual warfare against fellow human beings. We should be protecting the borders of our countries and the Earth only.
----

Eric adds: There are 100+ other examples but good for the sake of brevity.   For example Apollo 11 & 13, and the runway for the space shuttle is "33" with launchpads 39a and 39b *13x3").  They control everything from the top-down.  Frightening is the degree of power freemasonry holds that world history is serial patterned as it is. By the way, DIana's was a triple 13 8/31/1997 sums to 39.  Possibly coincidentally, the car struck the 13th column under the bridge. --

In articles as you pointed out you can also see the 11-style numbers.

"The scenario ends at the 18-month point, with 65 million deaths."

Conspirators use this numerical language in the press quite prolifically.

Another example, remember the early articles about the Corona virus, starting 56 deaths and 56 million on lockdown?

Just saw your recent post about Masonic numbers. Saw this the other day as well. Superbowl Sunday in US is 02/02/2020. It's a palindrome n also 220 months n 22 days since 9/11/2001. Will this be the day that the other false flag shoe drops or just another day? It seems like something is building to a crescendo.

Regarding the numbers being used by the elite please be aware of the number of votes that took place in the UK Parliament when the voted in favour of the BREXIT conditions on January 9th.

Henry, the conspirators finally have me baffled. I can't keep up with it anymore. Every time you think you got it covered another conspiracy hits the scene. This is a multiheaded monster. It's time to follow the good in the world and not the bad. We can't stop the evil but we don't have to be a part of it.

Let Eric Rainbolt know that Fuckishima occurred on 3/11 2011. This was not just a national attack of terror on Japan who have always been Palestinian FRIENDLY at UN . Mossad was handling the Daichi Nuclear plant security. but international terror as well.condemning the Earth as..they used Stuxnet to shut down cooling system and create the meltdowns. The Fuckishima event occurred 66 !! years after the "West" nuked Japan in 1945