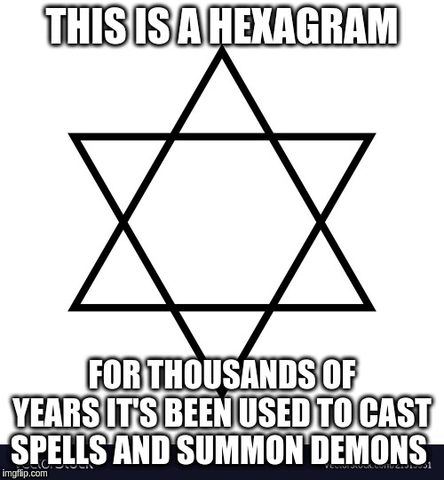 The Evil Symbol that Rules the World
The Hexagram has gained mastery over the human world.  Practitioners might appear to be upright Jews, Catholics or Masons, but they are impostors who infiltrate and subvert.
By CK
(henrymakow.com)
Behind the evil in this world is a symbol.  Understand this symbol and the cabal who use it and you can identify the evildoers and their diabolical plot.  This cabal hides inside legitimate religions and groups, such as Judaism, the Jesuits and the Masons, using them as shields for their evil deeds.  What they all have in common is their practice of the Hexagram and its dark arts.
The Hexagram is a symbol used by witchcraft and sorcery for thousands of years to conjure spirits.  The symbol can be found in many places; India, Egypt, Peru, China, Europe, etc.  Numerologists believe the Hexagram represents the evil number 6-6-6 and practitioners believe it can bind and control supernatural creatures.
To put a "hex" on someone is to put a curse on them.  The word Hex is itself derived from the number 6 in Greek; in middle German, a "Hexe" is a witch.  In China, the year of the snake is the 6th year in their calendar and the I Ching consists of 64 Hexagrams.
Worshipers of the Hexagram use it for evil - they believe that by performing rituals and human sacrifices, it gains more power.  Who are these worshipers?  Many hide within the Jewish faith, within the Masons and Catholicism, and of course more openly with witches, pagans and others.   Events like wars and persecutions are ritual human sacrifices performed to accrue more power to this symbol. 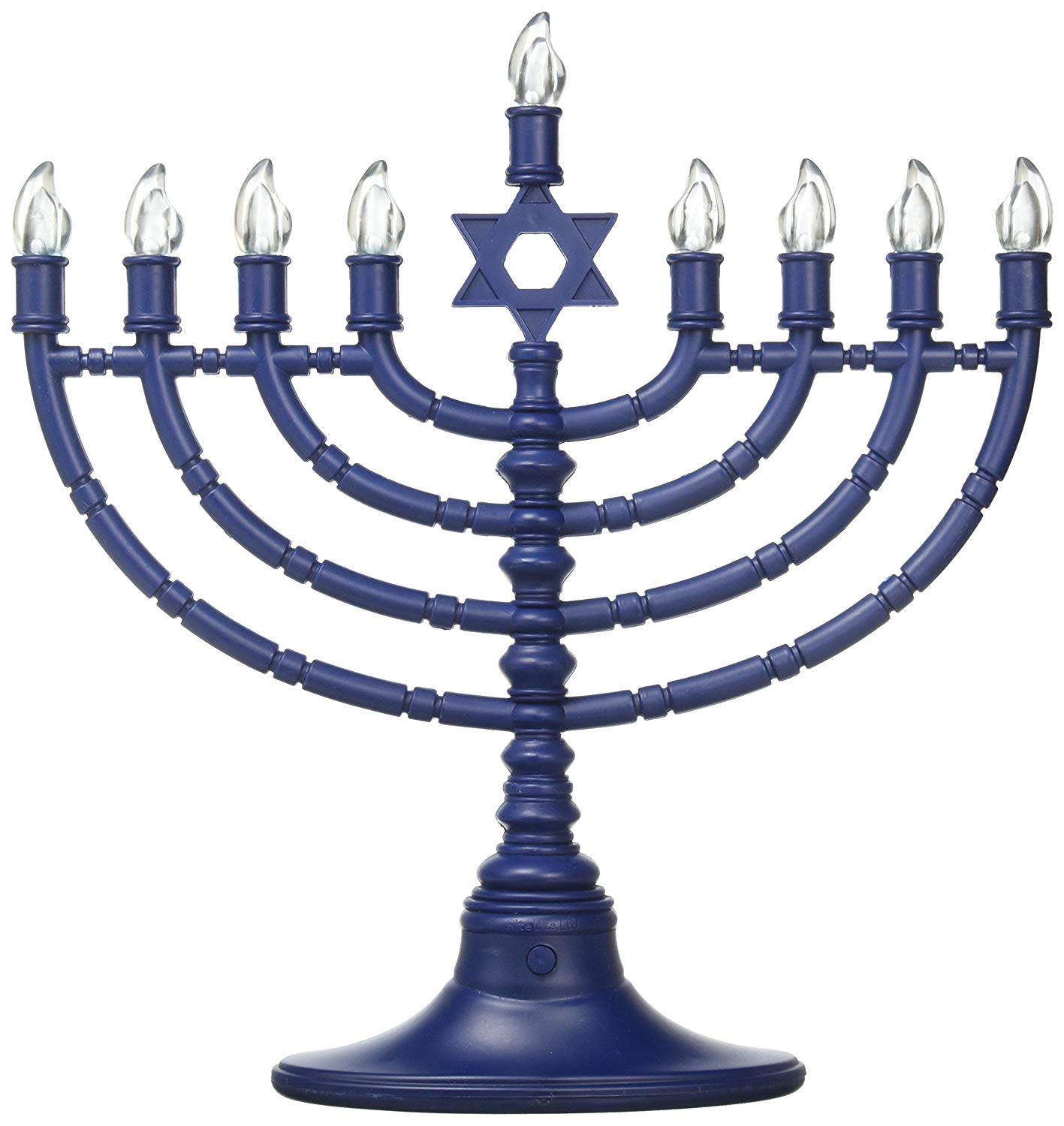 (left. Righteous symbols corrupted by Hexagram)
The original symbol of Judaism was the Menorah, which represented the relationship with God and the imparting of Judaic Law to man through the burning bush.   Today, Kabbalah and Zionism have replaced the original, true symbol of Judaism with the Hexagram.  Many Jews are unaware of the true meaning of this symbol.
According to Dr. O.J. Graham (The Six-Pointed Star, 1999), "The first mention of the star was in Amos 5:26 regarding the trek from Egypt to Canaan. Then in 922 B.C., when Solomon married the daughter of Pharoah and went into magic and witchcraft and built an altar to Ashtoroth and Moloch. The book traces the six pointed star from Egypt to Solomon, to Arab Magic and Witchcraft, to Druid use (references are documented). The book traces the star through Freemasonry usage to Mayer Amschel Bauer, who, in the 17th century, changed his name to depict the red six-pointed star (or shield) which he had hung on his door in Germany, and thus began the family of "Red Shield" or Rothschild. The research carried on through this family, to their court of arms, to Cabala, to Astrology, to Hitler and his putting a yellow six-pointed star on all Jews during the holocaust, to the Zionist symbol, and finally to the flag of the State of Israel and beyond."
RIGHTEOUS SYMBOLS CORRUPTED BY HEXAGRAM
It is difficult to tell the impostors from the true disciples of the way.  In history, authorities kicked out all the Jews from a country; it was near impossible to sort out those practicing witchcraft from the righteous.
The Hexagram is also used by the Masons who use the "Seal of Solomon" to do evil things.  The Masonic symbol is itself derived from the Hexagram.  This symbol is found on Masonic temples, and buildings constructed for the use of Masons which often have Hexagrams inside and out. 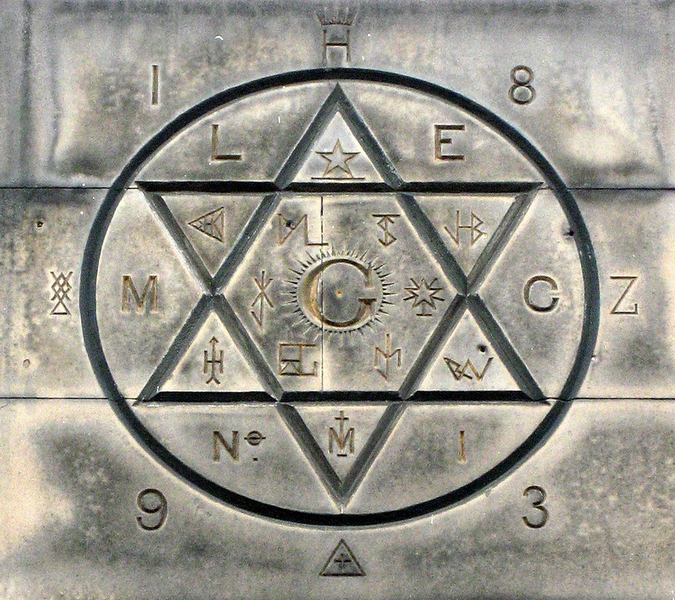 Relief from the Masonic Lodge of Edinburgh (Scotland) (source: flickr)
The symbol is also plainly visible on Catholic churches like Santa Croce in Florence, Italy and in the IX XI symbols used in Jesuit rings, where the void between the X's signifies the Hexagram.
ZIONISM AND COMMUNISM
Zionism and Communism were both created by the practitioners of the Hexagram, using large scale ritual human sacrifice to impose their plot everywhere on Earth.  Where this symbol goes, death and destruction follow in the form of a burnt offering, a Holocaust.  Two World Wars, the Holocaust of the Jews, and 9/11 are a few of the examples of the ritual human sacrifices performed to impose Zionism.
Communism was imposed at a cost of 60m lives in Russia and 80m lives in China.  In Russia, 60% of those involved in the plot were Jews, while in China, 85-90% of the westerners helping Mao were Jews.
The Masons had a hand in this as well, with President Truman (a Mason) subduing Japan by ordering two atomic blasts (another burnt offering) and FDR (a Mason) providing material aid to Mao as well as the communists in Russia. These Holocausts continue to the present day with the persecution of Falun Gong in China that includes live forced organ harvesting - something unprecedented in history. Today, the Chinese communist party is still in control of 1.4 billion people.

CONCLUSION
This affair is 5,000 years in the making - a dark and evil witch's tool for curses and occult powers has gained dominion over people, nations and civilizations.  It is used by a cabal of evildoers to impose the New World Order from Communism and Zionism.
The key to identifying the perpetrators is to see who uses the Hexagram;  the impostor Jews, impostor Catholics, secret societies and witches.  Many others were corrupted; they "sold their souls" to this group to gain money or power and they are now on the side of evil.  Those who are still good, but ignore the evil in their midst and still do nothing are "useful idiots".  They share the guilt of the perpetrators.
It's not too late to "get out" -- you have been misled and poisoned by the evil.  Your first step is understanding what is being done in your name is evil.  You need to see that good people are being persecuted by this evil all over the world and you must decide where you stand.  Regardless of what others might tell you, or what you did in the past, you were made by the Creator and He alone grants you the power to choose your future.
-------------
First Comment from Chris G
If King David was alive today I supposed he would be quite pissed off hearing people call the Hexagram the "Star Of David" since he was opposed to satanism his whole life.
IT'S RIGHT ON THE ISRAELI FLAG and people still don't get it because they are under a spell.  The same spell cast on 9/11 which is on the Jesuit's ring also -  IX XI .  TV and Movies seem to be part of the spell.  The whole world seems to be under a demonic spell why it's so hard for people to see the truth right in front of them:
drive.google.com/file/d/1dmhECtstdpybMtvkc0C_hyTYHOfEQ4D7
As for "...In Russia, 60% of those involved in the plot were Jews, while in China, 85-90% of the westerners helping Mao were Jews..." must be part of the spell, blaming victims for the crimes of crypto-Jews.
More like 100% in Russia and 100% in China were Crypto-Jews behind the scene pushing Communism.  No Russians or Chinese were involved with the creation of Communism!  There's a cheque from Nathan Rothschild to Karl Marx laying around somewhere to prove it.
Marx and The Rothschilds:
Hidden Hand by General Cherep-Spiridovich (1926):

Great piece, Henry, thank God, for people like you and Ted Pike, God brought me to your sites, to learn the TRUTH.

Jesuits and Popes all worship that Devil star too, and Masons, I've even seen it on Mosques.

In regards to the article "Hexed" -- Hexagram Holds Humanity Hostage', I have come across information purporting it to be the star of Remphan, (another name for Saturn which then translates to Satan), and it wasn't till many centuries later did the jews adopt the symbol initialling being 'red' before eventually represented in its blue form seen today mostly associated with Zionism and Israel.

It is correct to say it is used predominately in black magic, infact some go as far as saying it is bad luck to have this symbol in your presence or home.

Add to that, a person many truthers may have come across at some point I'm sure, an ex-grand druid witch known as John Todd's explanation of the hexagram based on his experience growing up in the occult.....

"...in witchcraft the hexagram is the most evil sign in the occult world. It must be present to call a demon forth during a ceremonial rite. The word hex, meaning to place a curse on someone, comes from the emblem." 6 triangles, 6 points, inside a hexagram =666".

A youtuber brought my attention to the fact that if one observed you will notice the 'star of david(?)' in the sculpture of old cathedrals, and had many images to prove so, along with mosques! Then that very week, I was parked in front of a mosque and lo and behold there right above the entrance door was a huge star of david !!! The youtuber claimed it was evidence that the kabbalah had a long time permeated all the Abrahamic religions, and that Judaism, along with Christianity and Islam had long fallen and what we have today are pseudo religions based on the Kabbalah. I am doing further research regarding this matter.

Along my travels I have taken photos to show how this symbol along with it's triangle (pyramid) IS permeating our culture, to quote Confuscius "Signs and Symbols rule the world, not rules nor laws".

Yes indeed, there is a poison going on today especially in America.

It won't be long before the big crash comes, and this time they won't be able to stop it. You are witnessing the biggest transfer of wealth ever from the lower and middle classes to the upper class in America History. Schools continue to close in the inner cities and the immediate suburbs as state lotteries continue to loot the poor. Some of the gas stations now are doing more in strate lottery sales than the volume of their stores in merchandise. The lottery is looting these people's last nickel by giving them a hope that they control by illegitimate drawings.

As more homes continue to be boarded up, in the lower and once middle class homes, more castles and I mean castles are being put up in the elite distant suburbs.

To make matters worse the FED keeps pumping more billions and trillions in the stock market through QE to protect the wealth that has looted the American public. The debt keeps growing because Americans are broke and in debt. They somehow think they will be able to sustain the economy by passing the debt to future broke generations for the next 100 years or longer.
With Marxist economics where "all is money" all eventually collapses.