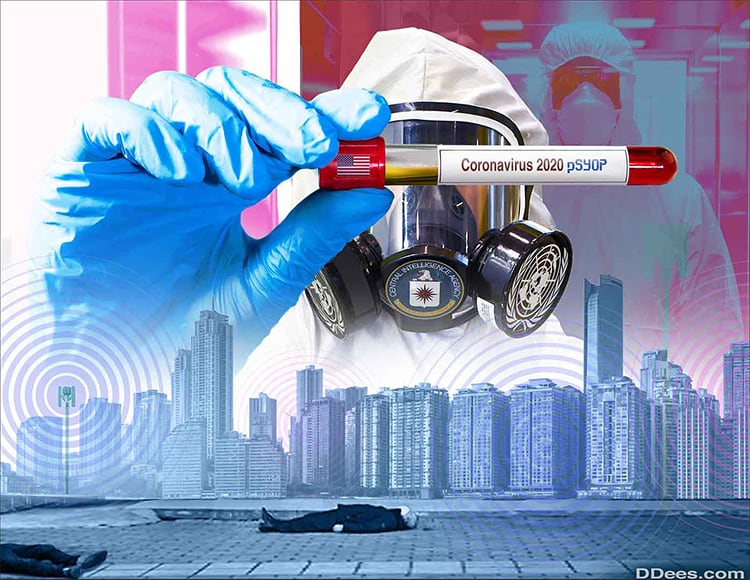 Vaccine manufacturers, govt agencies and financial institutions are embedded in a revolving door of a vast industry that is constantly pushing the 'pandemic' button in the hope of a world wide vaccine programme.
Compiled by JL
(largely from Makia Freeman)
(henrymakow.com)

Most of the uninformed public react as programmed, simply because fear is PROVEN to trigger a narrowing of the mind, a lowering of IQ, a stimulation of the child ego (that looks for an adult to save it) and a reflexive obedience toward perceived authority.

Step 1) Poison the population purposely to create disease that does not and would never occur naturally.

Step 2) Portray the purposely created disease as being caused by something invisible, outside the realm of control or knowledge of the average person.

Step 3) Create a toxic vaccine or medication that was always intended to send the population to an early grave.

Step 4) Repeat as many times as possible upon an uninformed population because killing a population this way (the art of having people line up to kill themselves with poison......known as a "soft kill" method) is the only legal way to make sure such eugenic operations can be executed on mass and in plain sight.

GAVI, partly funded by the UK Govt has many pharma industry representatives on its governing board. This group which sets the price for vaccines and stimulates demand.

The AMC is a special financing mechanism set up in 2007 by Gavi and six donors (Italy, the United Kingdom, Canada, the Russian Federation, Norway, and the Bill & Melinda Gates Foundation) to stimulate development of vaccines.

It is clear that vaccine manufacturers, govt agencies and financial institutions are embedded in a revolving door of a vast industry that is constantly pushing the 'pandemic' button in the hope of a world wide vaccine programme.

The corruption of this agency is well documented.

In the meantime, we have the The ID2020 Alliance.

Launched with an initial grant from the Rockefeller Foundation.

Bill Gates is a founding partner in a company called the ID2020 Alliance, and its goal is to give every human being on earth a digital ID.

How do they plan on accomplishing this feat? By combining mandatory vaccinations with implantable microchips.

The ID2020 Alliance is a digital identity program that aims to "leverage immunization" as a means of inserting tiny microchips into people's bodies. In collaboration with GAVI.

Bill GATES is part owner of the coronavirus vaccine via Pilbright Institute. He helped to create a pandemic exercise with the Chinese CDC just a few month before the reported 'outbreak' using the same virus.

He is involved with CEPI who are funding the vaccine manufacture, GAVI who sets the price for the vaccine and  ID2020 who will use vaccines to microchip the public in line with the UN,s agenda 20/30.

The Pilbright Institute which has a patent for the coronavirus has links to Bill Gates and Dr Adrian Hill of the Jenner Institute.

Hll is the man who was involved in Ebola vaccine studies!

Innovate UK , the agency pushing the smart/5G agenda, is also linked to Pilbright and fund trials.

Various independent researchers around the web, for around 2-3 weeks now, have highlighted the coronavirus-5G link despite Google (as the self-appointed NWO Censor-in-Chief) is doing its best to hide and scrub all search results showing the connection.

The coronavirus 5G connection doesn't mean the bioweapons connection is false (it's not a case of either-or), but rather broadens the scope of the entire event.was one of the test cities chosen for China 5G rollout; 5G went live there on October 31st, 2019, almost exactly 2 months before the Wuhan coronavirus outbreak began.

Meanwhile, many scientific documents on the health effects of 5G have verified that it causes flu-like symptoms. 5G can exacerbate or cause the kind of illness you are attributing to the new virus. The rabbit hole is deep so let's take a dive.

Now Huawei is pretending 5-G is some kind of cure.


5-G IS A DIRECTED ENERGY WEAPON

For the deeper background to 5G, read Makia Freeman's 2017 article 5G and IoT: Total Technological Control Grid Being Rolled Out Fast. Many concerned citizens, scientist and even governmental officials are becoming aware of the danger of 5G. It has already been banned in many places worldwide, such as Brussels, the Netherlands and parts of Switzerland, Ireland, Italy, Germany, the UK, the USA and Australia.

After all, 5G is not just the next generation of mobile connectivity after 4G; it is a radical and entirely new type of technology - a military technology used on the battlefield that is now being 'deployed' (military term) in the civilian realm.

It is phased array weaponry being sold and disguised as primarily a communications system when the frequency bands it uses (24GHz - 100+GHz including MMW [millimeter waves]) are the very same ones used in Active Denial Systems, i.e. crowd control. Even mainstream Wikipedia describes Active Denial Systems as directed energy weaponry; it disperses crowds by firing energy at them, causing immediate and intense pain, including a sensation of the skin burning.

Remember, directed energy weapons (DEW) are behind the fall of the Twin Towers on 9/11 and the fake Californian 'wildfires'.

CONCLUSION
This pandemic is being used to forward  Agenda 20/30, the UN's policy of complete control over the world population. Of course, this is sugar coated. (Transforming Our World)
This Agenda is a plan of action for people, planet and prosperity. It also seeks to strengthen universal peace in larger freedom. We recognize that eradicating poverty in all its forms and dimensions, including extreme poverty, is the greatest global challenge and an indispensable requirement for sustainable development. All countries and all stakeholders, acting in collaborative partnership, will implement this plan. We are resolved to free the human race from the tyranny of poverty and want and to heal and secure our planet.
We'll give Dave Work, the last word. In 2018 he wrote:
Agenda 2030 is the blueprint for herding the "sheeple" in this last leg of the journey towards the "New World Order."
Once again, the "Hegelian Dialectic" is being used. If our psychopathic controllers told us we will be slaves with no possessions or freedoms and even reproduction will be controlled , would we accept that? Of course not! So they use sugarcoated "doublespeak" to make us believe that Agenda 2030 is to end poverty and hunger. [Now disease is the pretext.]
Unfortunately for us normal folks, a few thousand psychopaths cannot possibly control seven billion people, so depopulation is an important part of the agenda. According to their own Georgia Guidestones, the ideal (controllable) population is about 500 million, so a lot of us need to "leave" the planet before they can have things their way!
Ending poverty and hunger? The powerful and greedy bullies who created Agenda 2030 are hoarding vast unimaginable amounts of wealth and could easily solve world poverty (if they wanted to) and still have plenty left over!
----------
Related - Mystery Solved- Coronavirus is a US Bioweapon
First Comment from Andrew
Past Psychological Operations (PSYOPS) EXACTLY like Covid-19 were Zika, Ebola, SARS, MERS, H1N, West Nile Virus, Avian (bird) Flu, Swine Flu, etc...
The simple cold viruses (SARS, MERS) fizzled out in the spring (just as Covid-19 will in a few weeks).
What I find alarming is the loss of our Civil Rights under cover of one of these PANIC PARTY PsyOps. In 2005, President George W. Bush asked, "If we had an outbreak somewhere in the United States, do we not then quarantine that part of the country? And how do you, then, enforce a quarantine?"
At that time, the US Military was forbidden from undertaking law enforcement duties by Federal Posse Comitatus Act. Bush's wish became law in Fiscal Year 2007 with (H.R. 5122.ENR), (Section 1076) which allows the President to use the US Military to "restore public order and enforce Federal law" for "natural disaster, epidemic", or other public health emergency, terrorist attack or "domestic violence incident." That effectively circumvented Posse Comitatus Act on 1878.
Bush signed this into law one afternoon on National Public Radio. The public promptly forgot about it. BUT Barack Obama picked up where Bush left off
On Aug 1st 2014, Obama enhanced Bush's 2003-2005 Executive Order 13295, titled Revised List of Quarantinable Communicable Diseases. Where Bush had specified only SARS and Avian (bird) Flu, Obama added the words, " severe acute respiratory syndromes, which are diseases that are associated with fever and signs and symptoms of pneumonia or other respiratory illness, are capable of being transmitted from person to person". That can potentially mean anything that WHO and/or CDC say is a threat. Who appoints the head of the CDC? The US President appoints head of CDC.
On the very same day in 2009, New York City held its "largest ever" bio-terror response drill which raised the possibility that "terrorists" might release deadly viruses into the environment.
With Covid-19, the government is adding another arrow in their quiver, should they need to enact martial law.
Thankfully The White House isn't buying it. Trump barred a top health expert from speaking freely about the coronavirus. It's one of many ways the administration has muzzled scientists.
...

ITo make it sound more alarming the new cold virus, coronavirus has a new name, Covid-19 which stands for Corona Virus Disease 2019. But let's not join this PHONY PANIC PARTY which is reminiscent of the first one, 2003 SARS (which was also a corona virus like last year's MERS), BUT THEY'RE JUST COLD VIRUSES!  So why should we join the Covid-19 PANIC PARTY until its death toll reaches alarming proportions? An alarming proportion would be something at least as scary as the number of annual flu deaths of 500,000, but Covid-19 hasn't killed even 5000 yet! So why not add Covid-19 to the now long list of PHONY & DEBUNKED PANIC PARTIES.

The final sentence of the article displays serious ignorance of how the financial system actually works: "The powerful and greedy bullies who created Agenda 2030 are hoarding vast unimaginable amounts of wealth and could easily solve world poverty (if they wanted to) and still have plenty left over!" If the author is referring to financial "wealth", then this doesn't need to be hoarded by the ultimate controllers as it is constantly being created out of nothing by the banking system; it is mere numbers, accountancy, which can be manipulated however the bankers choose. If (which is very unlikely) the author is referring to real wealth--things like raw materials, plant, goods, technical knowhow, etc.--then this exists in abundance and in fact could easily be multiplied. The problem is that financial means are a choke point for public access to the benefits of the real wealth, which access the banking elite restricts in order to keep the population in a continual state of subservience.