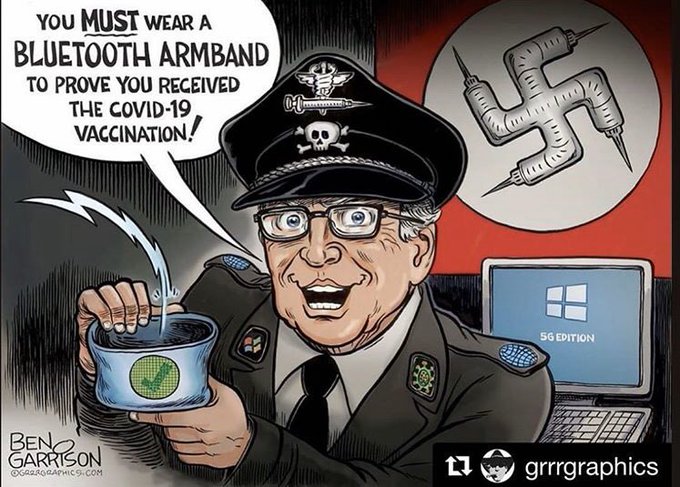 If we compare these numbers to a real pandemic like the 50 million dead worldwide of the Spanish Flu, we must ask WHAT'S ALL THE FUSS? The fuss only makes sense as a PSYOP.
"Viewed in it's totality this CV-1984 PSYOP is weaponized DISINFORMATION mainly targeting the Chinese-Russian-Iranian alliance overseas and Middle Class Americans at home."
Andrew is a retired attorney living in Texas.
by Andrew
(henrymakow.com)
Since the coronavirus outbreak began in China last December 2019, it's become a psychological warfare operation (PSYOP) with news outlets spreading sensational panic instead of reporting objectively and accurately.
Psychological operations are MILITARY operations to convey selected information to audiences to influence their emotions, motives, and objective reasoning, and ultimately their behavior and that of governments.
Remember this coronavirus is a chest cold virus and NOT an influenza virus with pandemic potential like the 1919 Spanish Flu which killed 50 Million people worldwide.
Supposedly this COVID-19 (CV 1984) is a first of its kind KILLER COLD. That's according to Dr. Anthony Fauci who daily announces PANDEMIC prophesies regarding this KILLER COLD. 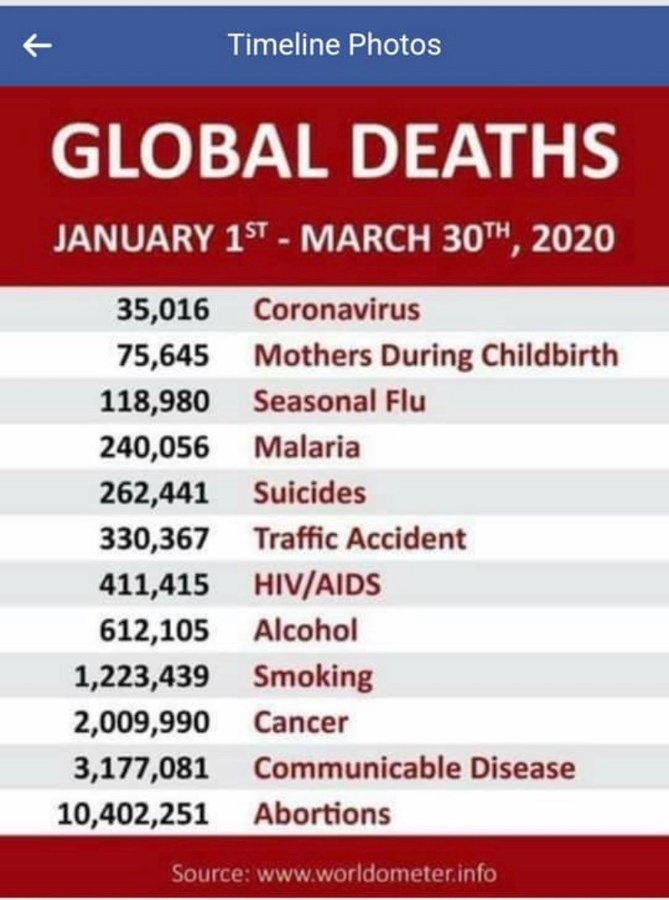 As of now, this KILLER COLD has SUPPOSEDLY infected ONLY 1,088,000 people globally and killed about 58,000. While these figures may not be particularly alarming compared to the 1919 Spanish Flu (a real pandemic), they are presented everyday as a doomsday prophesy by more-than-willing news outlets that scaremonger rather than report objectively.
As of Saturday April 4, 2020, Italy is reporting the most CV-19 deaths with almost 15,000 followed by Spain with 11,000, USA with 7000, France with 6500, China with 3400, Iran with 3300, etc. If we compare these numbers to a real pandemic like the 50 million dead worldwide of the Spanish Flu, we must ask WHAT'S ALL THE FUSS? The fuss only makes sense as a PSYOP. Actually this KILLER COLD (coronavirus) death toll is only relatively high in Italy, Spain, USA, France, China and Iran BUT not in countries like Syria (2), Russia (34), Mexico (50), India (72), Brazil (359), Sweden (373), etc.
Scott Bennett, a former psy-ops specialist with the US army, says, "this is a fabricated psychological operation that has been coordinated with an actual physical sickness (Dr Anthony Fauci's KILLER COLD) to spread fear, panic and intimidation in the Chinese economic markets with the purpose of isolating China and disrupting the Chinese-Russian-Iranian economic, military alliance...."
"This is an exploited psychological operation designed to sow panic, intimidation and also open up doors for 'aid and immune vaccination development,' which may in fact lead to more harm than good. Remember the West and its (US) Deep State are inundated with these big pharmaceutical companies that generate vaccines that do nothing except cause more harm..." he added.
"So the coronavirus I think, is developing into a lot of smoke but with no fire and the amount of people who die from traditional influenza and sicknesses actually exceeds the coronavirus explanations," he noted.
HIGHWAY ROBBERY
Bennett is right about the external targets of this CV-1984 PSYOP, but he failed to see or mention the targets inside America like the Middle Class American people, their retirement accounts and the US Economy. 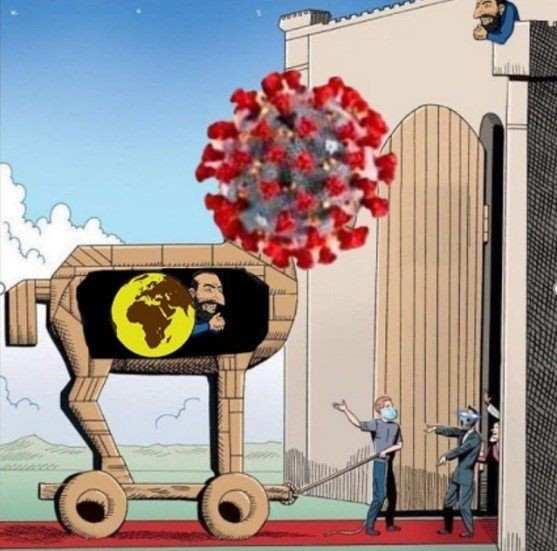 By convincing the American public that a common cold was the terrible PANDEMIC CV-19, Americans don't see their retirement accounts being drained by the FED working in cahoots with investment bankers on Wall Street like Goldman Sachs.
To make sure Americans don't connect the dots between the drainage of their retirement accounts to the FED and the investment bankers, the government imposes a nationwide quarantine to simultaneously destroy the American economy.
Controlled news outlets will convince everyone that a KILLER COLD and AND RESULTING quarantine impoverished them and not the FED and the stock market manipulating investment bankers...
Viewed in it's totality this CV-1984 PSYOP is weaponized DISINFORMATION mainly targeting the Chinese-Russian-Iranian alliance overseas and Middle Class Americans at home.
In this connection, we have to view Italy's CV-19 deaths with almost 15,000 supposed deaths in the context of events in March 2019 when Italy has become the first developed EU economy to sign  China's Silk Road global investment program which has raised ALARM among Italy's American and EU allies.
"China's Communications and Construction Company will be given access to the port of Trieste to enable links to central and eastern Europe. The Chinese will also be involved in developing the port of Genoa." With Italian ports, China will enjoy perfect logistics to distribute their MADE IN CHINA products throughout the EU.
https://www.bbc.com/news/world-europe-47679760
We should therefore end the quarantines, go back to work and school to revitalize the US and World economies.
Then we need to END THE FED and prosecute the bankers and investment bankers for restitution and CRIMINAL LIABILITY UNDER RICO for their fraudulent financial conspiracy. We need to get mad and get our money back from crooks on Wall Street and the FED who need to join Bernie Madoff in Federal Prison. And a few other things....
------------
Related -  A more detailed treatment of this theme
-------Makow -  It's 9-11 all over again, except it's us trapped on 94th floor
---------------------------- Pandemic Masks Communist Power Grab
----------------------------Scamdemic is another live drill
Note-
CV 1984 is just a cold NOT A FLU and therefore has NO PANDEMIC POTENTIAL. "The human coronavirus (HCoV) contains HCoV-229E, HCoV-NL63, HCoV-OC43, HCoV- HKU1, SARS-CoV and MERS-CoV. HCoV-229E, HCoV-NL63, HCoV-OC43 and HCoV-HKU1 are pathogens of COMMON COLD." SARS, MERS and coronavirus infections. - PubMed - NCBI
https://www.ncbi.nlm.nih.gov/pubmed/30550651
First Comment from Scott- 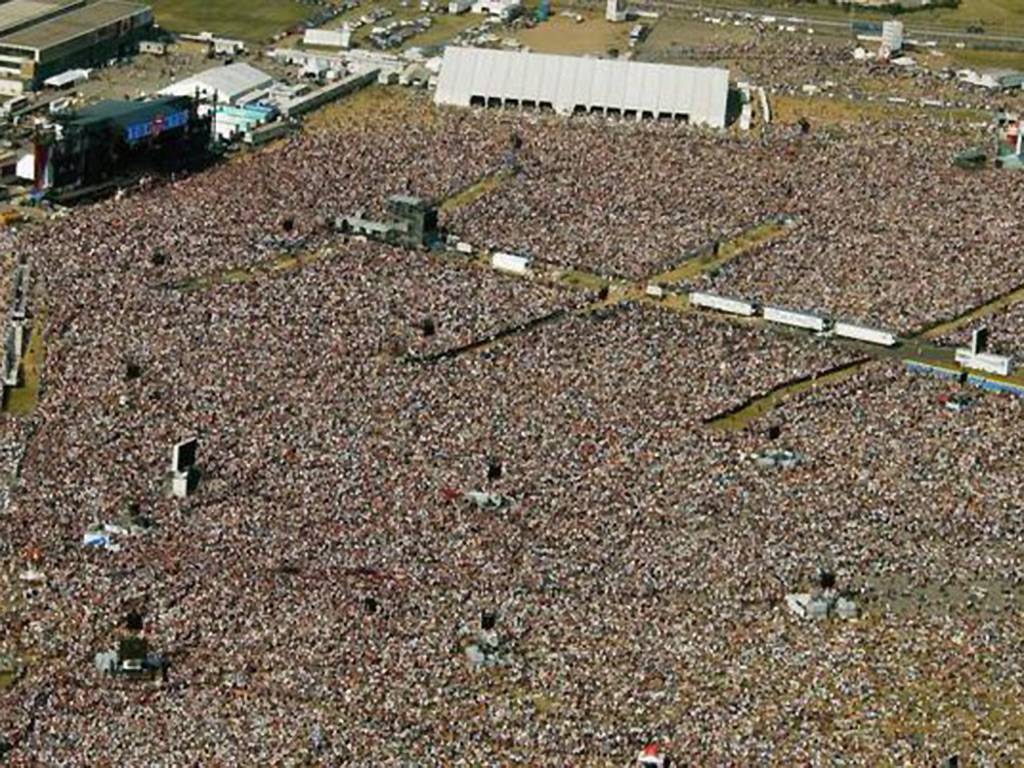 Henry, this has a least one precedent.  A virus was used as a psy-op.  In the States, SARS was treated like "if you breathe the air in Canada, you're gonna DIE!" Network news programs would edit to images of Chinese walking around in surgical masks.
At the time, it seemed like economic warfare against Canada.  This was due to Jean Chretien's refusal to send troops to Iraq in 2003.  The tactic worked.  Tourism was way down.
What put an end to it?  The Rolling Stones concert, outside of Toronto.  Even the most fearful could see that all was safe!

I saw a candid interview by Chris Wallace with Bill Gates this morning on 'Fox News Sunday'. When he asked Gates about how his life had changed on the personal level he really seemed a little shook. He really doesn't enjoy being restricted at the level he has been recently more than anyone else. He also mentioned the end game for a worldwide vaccine. And, he also talked about the need for getting more sectors of the economy slowly back to work.

I can't even imagine what the state of the American economy will be like on April 30th. A week in the Corona 19 world is like a month in a locked down world. The unemployment numbers and business failures by then will be so disastrous that it might take years to recover from.

The American economy needed a reset but this one may have gone too far already. The "Corona Curve" has flattened many wallets and business in the process.

We have been told by Dr. Fauchi that the Corona 19 virus war won't be over until the virus says it's over and he can't say exactly when that will be. That's quite a war strategy, in the military world it's called surrender.

Sooner or later the money will run out and when it does the strategy for fighting this war will change drastically.

Regarding the psy-op... Is it not coming down to those who are decidedly locked and loaded and those who choose (consciously or not) to be owned and to live as slaves?

Jus' sayin'. It's getting more polarized, day-by-day. We are seeing who each other is. Some still envision a way out without a fight. For others, that's hard to see; can't imagine the Satanists suddenly turning to integrity and granting freedom.

There was a time when some others put liberty above life. What an unnatural thing that is to do considering the will to live, the drive to survive that is so utterly innate and persistent. But some transcended it and fought for their freedom and the freedom of generations to come. I do not mean to sound pompous, but much of what we are currently experiencing seems more and more to be a journey of the soul. Fear is here, but so is courage. We tap into both, but which tap will reveal our essence.