Married to a Media Dupe? 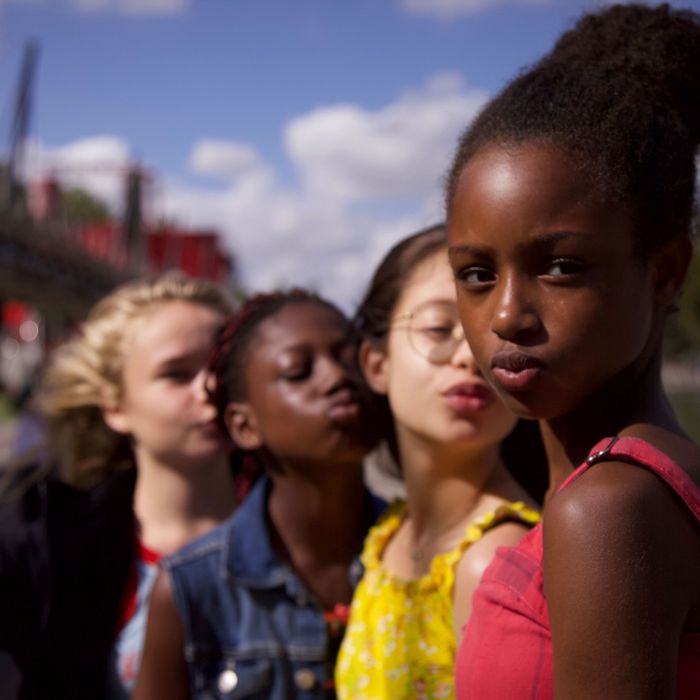 "A man's level of self-esteem is in direct correlation with his ability to say "No" to a woman."
--Wesley Everest
"Women almost always go in the direction of the strongest male presence, the man who will take care of them, and at this time in our history that is our government and their social assistance programs. Do not to debate women. This is an extreme view but it makes perfect sense. At any rate, it should free up time."  -- JJ
In response to Wesley Everest's Silly People Distancing, I asked:
- What do you do if you're married to someone who believes the mass media? You don't get far calling them stupid. Your answers: [email protected]
***********************
1. Wesley Everest: An Appeal to Men
I think 'stupid' is the perfect word. Are you afraid of your wife, Henry? I'm not afraid of mine. My wife is stupid and I tell her every day. As soon as my jailer lets me free, I'm getting away. I want to be far away from Jezebel and these energy vampires. I really do detest their stupid thinking and Feeeeelings.
I'm appealing to any male living in a relationship with a female, married or partner, to practice social distancing from her. It is the Hysterical Female Attitude that has made them the trustees of a prison, working for the Governor for free. They have locked us down; maybe they think they will have more 'together time' with their schmoozy, I don't know.
If they want to think the psychological mind-fuck that is social distancing is normal - give it to them. Don't touch them; don't eat their food, just stay away from their infected thinking. Right now my personal distancing from an Hysterical Female is about forty feet. That way they have to yell their idiotic argument about how this is such a great idea and maybe, just maybe, they will hear how stupid they sound. It's just a sliver of hope...
---
Kelley-
" I'm kinda in the same situation here, my fiancee believes all this pandemic hysteria going on, her doctor even called her a few nights ago and said "ya know, I was skeptical at first, but a couple of my patients are now in hospital with this, it's real, and I want you to be very careful, blah blah blah". It doesn't take much of an I.Q. to be a doctor in the USA anymore. 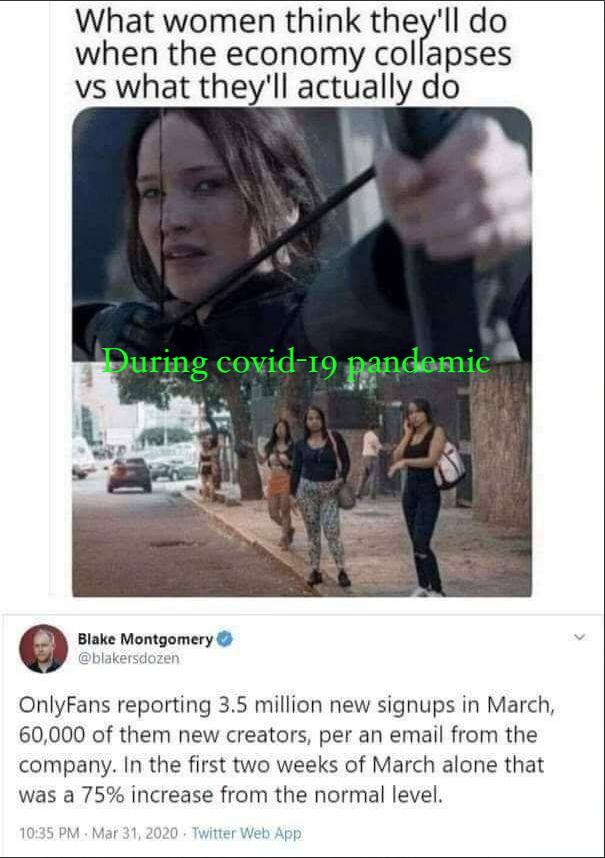 My fiancee believes the bullshit completely and I became angry 2 nights ago trying to talk to her, finally gave up and angrily exclaimed "Just forget it, your mind is closed, I won't bring it up again"
So I've decided to just keep it to myself, the people around me don't have curious minds, they believe the lying mass media and govt. implicitly, so I just keep it inside and don't say anything. Yes I feel very alone, but don't know what else to do.
-
Stephan -
I stopped arguing with my wife altogether as this subject become a source of disputes. She even started calling me conspiracist and irresponsible!
She has more trust in the government and health agencies. Although I am a scientist (data scientist), when I talk with facts and statistics, she doesn't want to listen. She is also very upset because I changed my mind. I have initially believed the "story" but no more as the facts go in the opposite direction.
John-
Not surprisingly, I'm married to 'someone who believes the mass media.'  In fact, I'm surrounded by people who not only believe the MSM, they believe they are therefore well informed.  Accordingly, they dismiss all my skeptic remarks as the raving of a conspiracy nut.
Sure, occasionally I still express disbelief in the unending stream of BS that emanates from the TV 'news' authorities. But I have no expectation of being taken seriously. My wife even got annoyed the last time I sent her a link to an expose' of satanism in Hollywood. She made it clear she doesn't want her illusions pricked by evidence! 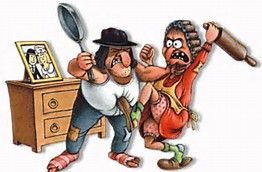 So, bottom line-- I basically avoid dissing the nonsense pouring from the boob-tube... as much as possible, anyway. Sometimes I just have to utter my frustration at the propaganda, and especially the fact that the sheeple just don't get it, and worse, don't WANT to get it.  Other times, I just leave the room; such as when she watches the social programming to promote transexualism, presented as a human interest/reality show.
It doesn't matter if you use my name or not; she'd never read your website!
-------------
Maria J-
I would encourage them to listen to and/or watch alternative information.  Like the youtube video at: www.nomorefakenews.com Calling someone "stupid" is not really helpful.  Providing them with correct information is much more helpful.  Say"  "You are an extremely intelligent person.  That is why I married you.   I see your intelligence and your wisdom.  I am interested in what you think of the video.  Let's talk about it later."  Or, watch it with her if she would like that.  Being disrespectful and condescending is not the correct approach.
Galen-
What do you do if you're married to someone who believes the mass media? - Well, if you truly love them, I mean him or her, don't give up.  Keep talking; keep presenting truth via articles, trusted voices/sources.
I had this situation in my own life and that's just how I hit it:  I didn't give up and I did it with love and respect, even though at times it was frustrating and seemed a losing battle. But time was on my side, because as more and more or the real story emerged, there was a slow coming around by my spouse and from there the floodgates opened.  What seemed to work particularly well was when someone other than myself brought the information, someone not invested in having to be convincing.  Gradually head-way was made, and now we are a team on the same page employing the same strategies.
Now, if the marriage is not anchored in love...  Well, that's a bigger problem.  These times might assist in being a deciding factor as all crises are heightened, all conflicts more evident.  One simply has to decide what one can live with.  Not easy, I know, especially for the aged.
--
Jill-
I am a female who has been following your website for several years. I am NOT a femnist. I don't believe the MSM. I listen and read alternative media. I am married to a man who doesn't share my point of view. He does listen to me, he even listens to other points of view. But we usually keep our points of view to ourselves. It can get tense. But don't characterize or put women in that box. There are plenty of men who are married to women that don't drink the koolaid!! There are many women I know who think the same way I do. We aren't all duped!

Comments for "Married to a Media Dupe? "

Well the shoe is on the other foot at our house. The woman gets it but the husband isnâ€™t seeing things the same way.

I loved your â€œmedia dupeâ€ phrase so much that I wrote a small rhyme about it.

Propaganda wins over a media dupe
It ainâ€™t all the truth, now thereâ€™s a news scoop!
The boob tubeâ€™s our authority in every single way.
It somehow gives credence to what the â€œexpertsâ€ say.
If youâ€™re bound to believe what you hear on TV,
Iâ€™m bound to point out your gullibility.

I think we cannot expect women to have the same understanding or view of the world as men. They have their things to do (kids, house, etc) and men have their things to do. They are complementary. To a large extent the fault is on the man. If the man is good, then the wife will be too. If the man is in sin and in a bad direction the wife will be too but another way.

It is like in the garden of Eden, Adam didn't guard the garden enough and the serpent went to Eve to tempt her. Women being more weak need also spiritual protection, not only physical with house, money, guns etc.

Women are very emotional and unthinking creatures. They require firm guidance, along with love.

Women constantly have been trying to control men since Eve, and men have been trying to dominate women. Itâ€™s only perfected when both sexes surrender their desires to God, and when men love their wives, and women obey and revere their husbands, as Sarah called Abraham Lord.

What to do with a wife? My wife listens, can even learn. If she really diagrees with me, she just gets quiet. Of course, she is a flip, so that is expected. What to do with one of these American women? I cannot even imagine. King Solomon wrote, it is better to live alone in the desert than with a contentious woman.

The problem here is not that women are women, not men, and will NEVER think or react as men do. Well, a few will. but those few are hated by both men and women as they are such unnatural bitches, always irritated and irritating because they are unable to really be men.

The problem is that foolish men in positions of political power they are not able to properly use, and contriving satanic conspirators, have purposely destroyed the NATURAL MARITAL DIVISION, SET BY GOD, wherein the husband shall be the ruler of the marriage and the wife shall be his HELPMATE, not his equal, not his boss.

Her domain is the household, the proper raising of the children, both of which she naturally excels in when in proper, natural, mindset, everything outside those areas are the prerogative of the husband with the wife simply making it possible for the husband to do his duty to his family without undue hindrance. This is also the key to happy marriages, despite today's never ending propaganda to the contrary.

I quickly remind them about Pearl Harbour, Gulf of Tonkin, Bay of Pigs, two planes -three buildings, weapons of mass destruction in Iraq and climate crisisâ„¢!