BioWeapons Part of Chinese Plan to Conquer US 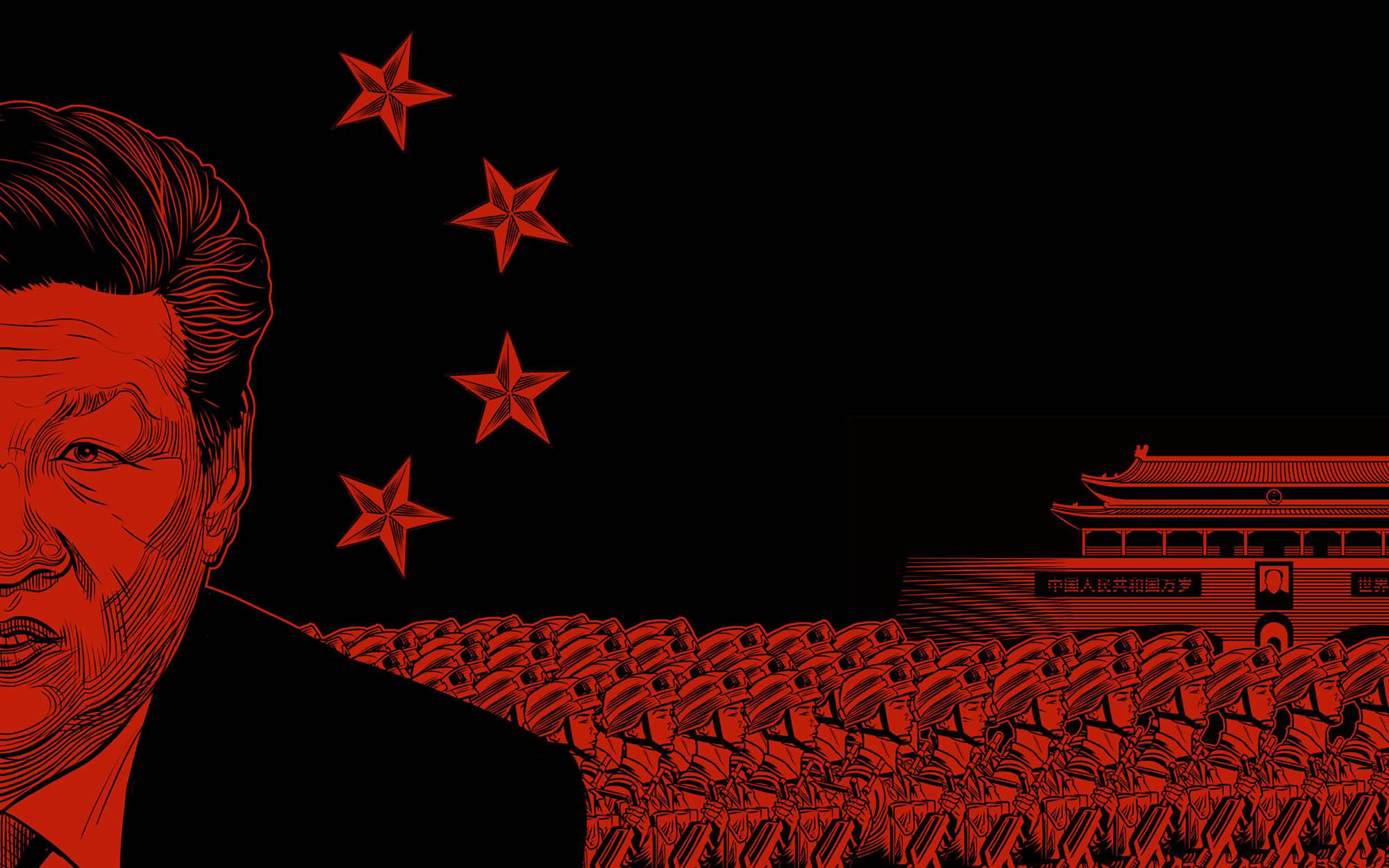 General Chi Haotian, the Chinese Minister of National Defense from 1993-2003, outlined this secret agenda in a speech to Chinese Communist leaders in the late 1990s, which provided the entire future blueprint of China's plans to destroy America and take over the entire world.
China is a proxy for the Rothschilds. Chinese have for decades regarded bioweapons as the most effective way to conquer the US.
...Deception is Supreme:  Comrade Xiaoping emphasized: "Refrain from revealing ambitions and put others off the track."
The message is: we must put up with America; we must conceal our ultimate goals, hide our capabilities, and await the opportunity. 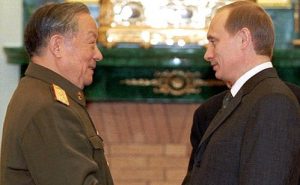 General Chi Haotian; Chinese Minister of National Defense, 1993-2003 meets with Putin
Our Greatest Existential Threat Comes from China
by Chris Pirnak
(henrymakow.com)
Communist China is the world's greatest existential threat.
The Soviet Union didn't really fall, but its economic might is too small to take control of the whole world.
Although most of the current Russian government is populated with former Communist party members, and their desire to conquer the West is largely intact, Russia's economic might is no longer sizeable enough to achieve its lofty goals. In fact, it never was powerful enough to conduct a long-term occupation far from its borders.
Indeed, Russia could nuke the United States into the stone age, but it could never handle a protracted war in another continent; hence, its secret agreement with Communist China. Both governments despise the West, view the United States as its antithetical foe, and would wish to topple the dollar hegemony. The Western elite conspirators know this, and that is why they built up China's economy to rival the United States.
The agenda to empower China goes back at least fifty years when Henry Kissinger flew on a series of secret diplomatic missions to Beijing in 1971, where he met with CCP Premier Zhou Enlai. 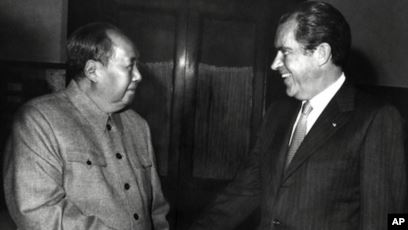 President Nixon's week-long visit in February 1972, allowed the American public to view images of China for the first time in over two decades. Throughout the week, the President and his senior advisers engaged in substantive discussions with the PRC leadership, including a meeting with Chairman Mao Zedong. The trip spawned China's opening to the world and economic parity with capitalist countries.
CHINA'S DOUBLE CROSS
China's secret plans with the devil include double-crossing its strategic partners.
-General Chi (in response to the Tiananmen Square riots.) 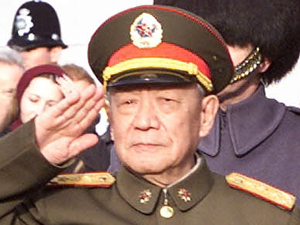 General Chi Haotian, the Chinese Minister of National Defense from 1993-2003, outlined this secret agenda in a speech to Chinese Communist leaders in the late 1990s, which provided the entire future blueprint of China's plans to destroy America and take over the entire world. This speech was smuggled out of China by an anti-communist and translated into English in 2005 by the Epoch Times for all the world to read.
"Only by using non-destructive weapons that can kill many people will we be able to reserve America for ourselves. There has been rapid development of modern biological technology, and new bio-weapons have been invented one after another. Of course, we have not been idle, in the past years we have seized the opportunity to master weapons of this kind.
"We are capable of achieving our purpose of "cleaning up" America all of a sudden. ..From a humanitarian perspective, we should issue a warning to the American people and persuade them to leave America and leave the land they have lived in to the Chinese people. Or at least they should leave half of the United States to be China's colony, because America was first discovered by the Chinese.
"But would this work? If this strategy does not work, then there is only one choice left to us. That is, use decisive means to "clean up" America and reserve America for our use in a moment. Our historical experience has proven that as long as we make it happen, nobody in the world can do anything about us. Furthermore, if the United States as the leader is gone, then other enemies have to surrender to us.
Biological weapons are unprecedented in their ruthlessness, but if the Americans do not die then the Chinese have to die. If the Chinese people are strapped to the present land, a total societal collapse is bound to take place."
According to Joel Skousen, "the content of this speech should shock you to the very core. It is candid, sophisticated, hard core and blunt.
China follows Sun Tzu's "Art of War" philosophies in feigning weakness, and concealing all their actions and intentions. They would never admit that this speech exists. If it ever got out into general circulation, it would be China's worst nightmare, destroying decades of propaganda. If ever confronted with its contents, they would take a page out of the Deep State's disinformation handbook and proclaim it to a forgery--that is how you get the truth discredited."
Based on General Chi's speech, here are the main points and justifications.
+The Soviet Union failed, because they failed to build up their economy. The Communists Chinese will never make the same mistake.
+The CCP is creating the overcrowded conditions in China, so that the Chinese would seek the spoils of the United States, and eventually control of the whole world.
+The Communist Chinese believe they are racially superior and view Soviet Russia with contempt.
+Deception is supreme.
+The Chinese won't make the same mistakes the Germans made. They will be ruthless and brutal in their execution of their plan
+ChiComm China views representative government with disdain.
+ChiComm China's atheist philosophy is a strength that no other large nation possesses. This was a weakness of Nazi Germany.
+ China opened its economy and feigned a desire for peace, but instead has been building a huge war machine.
+ While its trading partners have transferred military and information technologies as well as manufacturing capacity to its shores, China has exploited their feigning of weakness.
+ The Communist Chinese plan to use biological weapons that target Western populations and Caucasians in particular.
I agree with Joel Skousen's assessment; We have several years left before war and China is not yet ready to strike the West.
I believe COVID-19 was not an intentional release, but rather a result of sloppiness. However, the Western elite have maximized the crisis to consolidate its wealth and power, which makes me marvel at how the establishment press was loathe to discuss China's experimentation with bioweapons for so long. The matter only has become a matter of public record via President Trump's insistence.
The Western faction of this global conspiracy against humanity is fully aware of Communist China's secret intentions, yet they refuse to publicly recognize it to its citizens because they are collaborators.
In attacking the West, China will just be affirming its end of its Faustian bargain, but the Western elite will ultimately be responsible for letting it happen.
-------------
Related - John Pilgar - The Coming War with China

Comments for "BioWeapons Part of Chinese Plan to Conquer US "

Assuming the material you have published is correct, all of that changed in 2006. China will get Australia, New Zealand and Canada. Why would the Chinese government want America when Australia is the wealthiest or second wealthiest country (after South Africa) in the world?

I can't buy this "China war" just like any other nation against nation war in today's world. Actually, long before today.

In agreement with the article writer and "Robert K," of course China is a Rothschild proxy. But so is the U.S. and any other nation still allowed to have force against others. The force is all the same, no matter the national source, it is always talmudic satanism.

The full ending paragraph from Protocol Seven fitting this issue is: "In a word, to sum up our system of keeping the governments of the goyim in Europe in check, we shall show our strength to one of them by terrorist attempts and to all, if we allow the possibility of a general rising against us, we shall respond with the guns of AMERICA or CHINA or JAPAN."

This was written in 1884, Japan now being militarily reduced to wholly-owned American uselessness, yet all remain Rothschild/satanic proxies, not true enemies at all but very usefully pitted against one another by the kept media in their constantly promoted FEAR motivations for the herding of the sheep. Like the never ending Russian "threat" and the current extremely phony flu pandemic.

In reference to Robert K's comment on China below, I think of the Korean War when China joined the war on the side of Communist North Korea. Back then there really was such a thing as a Communism threat and America was militarily fighting against it.

Next, America went toVietnam to help the South Vietnamese resist a Communist takeover from the North that was real. China was also involved in that war. In 1967 there were 170,000 Chinese soldiers supporting the Communist North Vietnamese. This war was for real with many deaths and injuries on both sides. Like Korea, American soldiers were NOT allowed to win that war. Most Americans don't have a clue about that war nor do they care to know. They still believe that freedom is given and it is nothing you have to fight for.

We can't go to war against Communism anymore because it has been replaced by the NWO universal shadow government. Multiculturalism and the denationalization of the nation states of the world is the agenda.

The world is now getting a little taste of their future by the Corona War which has been waged on the nations and people of the world. And, sadly, freedom is the enemy which few are willing to fight for.

I was pleased to see your comment that "China is a proxy for the Rothschilds." The media convey a false impression of the loci of power by constantly speaking of various nations as if they can formulate policy autonomously, whereas the reality is that all are controlled by an international financial/corporate oligarchy. Remember the statement in the Protocols that any nation trying to resist the hidden world agenda would be brought to heel by means of "the guns of China".

The anti-Chinese line now being promoted persistently in Western media has its counterpart in China, where millions believe COVID is a weapon activated by enemies of their country. COVID is being used to alienate populations internally and externally in extreme ways: alas, the old tactic of "divide and conquer" still works on too many of the sheeple.