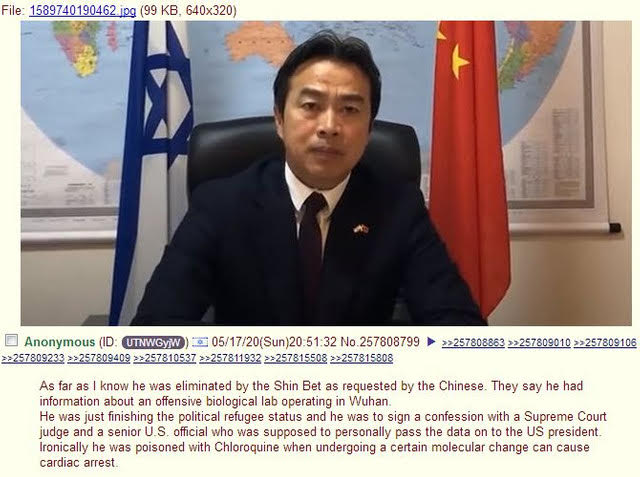 An Israeli poster on  4 chan said Shin Bet, Israel's internal 'Mossad', killed the ambassador at China's request after Du Wei tried to defect and share info on China bio-warfare labs, and then was double-crossed.
by Brabantian
(henrymakow.com)
Adding to a string of suspicious coronavirus events and deaths, is the 'sudden mysterious death' of healthy-seeming, age in late 50s Chinese ambassador to Israel Du Wei, at his home in Herzliya near Tel Aviv on 17 May.
This was just 4 days after US Secretary of State Mike Pompeo broke international quarantine to visit Israel on 13 May. 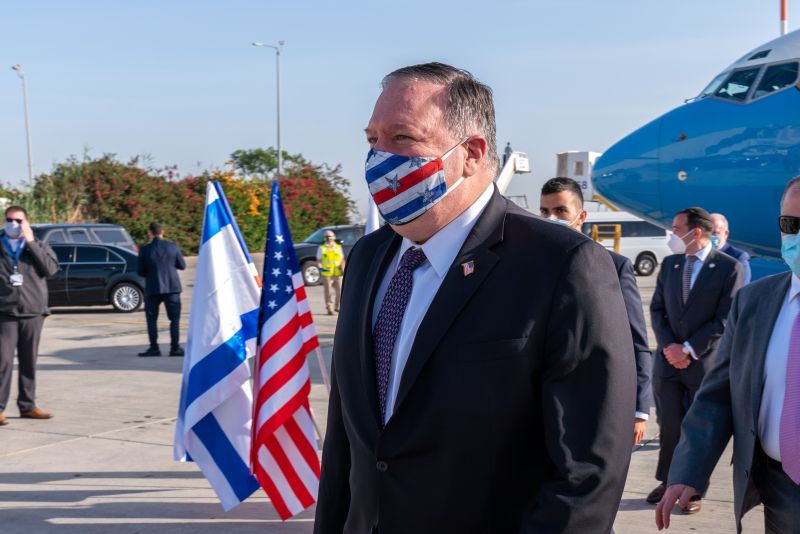 And shortly after Du Wei had publicly criticized Pompeo's aggressive charges accusing China of guilt in causing the global 'covid-19 pandemic.'
Before arriving in Israel, Du Wei had previously China's ambassador in hotspot Ukraine during 2016-19, he maybe had many stories to tell.
A fascinating 4chan thread on this death, was started by a poster in Israel.
(On 4 chan /pol/, the default setting reads your IP address and puts up the flag of the country you are transmitting from ... the poster can manually over-ride this, but only to put in a 'meme flag' signalling libertarian / communist etc instead of the country flag.)
The first Israeli poster said Shin Bet, Israel's internal 'Mossad' killed the ambassador at China's request, after Du Wei tried to defect and share info on China bio-warfare labs, and then was double-crossed.
Other Israeli posters quickly joined in Hebrew, saying to the first poster: >Delete it you fool >Say you lost all your sanity? Missing some screw or something? >Wipe it out fast, people entered the prison for life on less.
Other Israeli posters say the assassins could have come from the large Chinese worker community in Israel.
Another person wrote: "The Israelis let it happen because they don't want the west to find out about how much of China is controlled by their Asian Crypto Jew brethren."
A Chinese 'investigative team' is now arriving in Israel.
If it was a murder, who did it - Israel, the USA or China?
Du Wei had been publicly criticizing the USA's Pompeo over coronavirus accusations ... Was this genuine, or perhaps a cover for defecting?
For a Chinese person - or indeed anyone - inclined to be a dissident, a dangerous mistake is not realizing that the world's major governments seem to be often covertly working together, tho superficially 'opposed.'
For the late Ambassador Du Wei, maybe not knowing websites such as this one you are reading, he likely did not add up the implications of China sponsoring top USA political funder, Jewish billionaire Sheldon Adelson, to earn most of his income in Macau China casinos ... and China also allowing a large group of Mossad-linked Chabad centres in China.
We may never know the truth here ... Here's the 4chan thread, now archived
https://boards.4chan.org/pol/thread/257808799
--

Surprisingly, the MSM is doing a blackout on this story so far. They obviously are working through their channels to draw a narrative that does not or will not hold Israel complicit or negligent in the death of Du Wei in any way shape or form.This more than likely will be pushed off by the MSM on America or Russia to prevent blowback in Israel's direction once more.

The nation of Israel has the best security and intelligence network in the world. This would make it hard to believe that someone from the outside could penetrate their security systems.
I'm sure the MSM is working pretty hard on drawing their scenario which should be coming out soon.
Hopefully the death of Du Wei was from natural causes and not from anything else.

This is absolute bullshit.

more likely he had completed an investigation pinning the drops on Israel, and they murdered him to cover that up, then flipped the story. that is what I am going to post for tomorrow

thank you for sending it along. my original article has stood the test of time: https://tinyurl.com/Steele-Wuhan