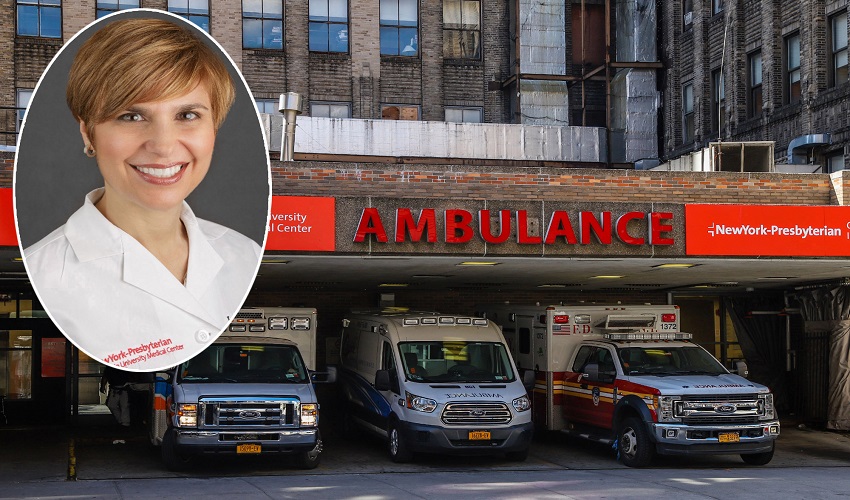 Dr. Lorna Breen was the Medical Director of the Emergency Department at NewYork-Presbyterian Allen Hospital.
On Sunday April 26, she
"committed suicide."
Yoichi Shimatsu speculates she may have objected to medical malpractice.
Or, she may have objected to treating the common flu like it were the bubonic plague.
"Then the unexpected happened at Allen; for some undisclosed reason, Lorna was told to leave the premises."   The "undisclosed reason" must be revealed, as it may explain her death.
ER Doctor Suicided
By Yoichi Shimatsu
(excerpts by henrymakow.com)
The first harbinger of this emerging social-economic catastrophe is the reported "suicide" of New York's most valiant and dedicated emergency room doctor, Lorna Breen MD, in an ongoing mystery that threatens to blow apart the smug leadership of America's richest hospital. ...
I am, as usual, skeptical since Breen was a devout Christian, a faith opposed to suicide as an out from worldly problems. Her faith and personal sense of mission for those in ill health meant there exist grounds for suspicion of foul play.
In these times of pandemic, proof is hard to obtain when a slew of malpractice issues are being tossed out with the body bags from nursing homes and hospital wards. Whatever our notions of compassion, pandemics are a time for house-cleaning, out with the old and in with the new. Show me a Mother Teresa nowadays or for that matter another Dr. Lorna...
The surge in coronavirus cases was obviously the greatest challenge in her career, quickly filling 170 of Allen's 200 beds, with an out-patient flow in the thousands....
Then she came down with a coronavirus infection, and had to go into isolation at her mother's home in Charlottesville. After about 10 days, her health recovered and so she returned to her post.
Then the unexpected happened at Allen, for some undisclosed reason, Lorna was told to leave the premises. She returned to Charlottesville to stay with her sister, where she reportedly tried to commit suicide by an undisclosed means and was rushed to University of Virginia hospital, where she soon died. Suicide seems out of character, so perhaps there was way more to it.
Obviously, key facts are missing from the received account. NY Presbyterian issued a bland statement in praise of her, but no details about why she was relieved of duty. During the ongoing COV pandemic, answers are not forthcoming. What little there's to go on will have to do as to what precipitated the events leading to her death.
OXYGEN IN SHORT SUPPLY
So what was at issue, the underlying controversy simultaneous with her death? If her Allen hospital was the bright hope for the Presbyterian group's eventual redemption and rediscovery of mission among the city's lower-income residents, the polar opposite is the Weill-Cornell Medicine center in Manhattan's swank Upper Eastside, the clinic of Wall Street and the UN rat pack....
It gets worse, thanks to orders from above for putting priority on wealthy donors by allotting them scarce equipment, just in case, depriving critical patients of needed breathing apparatuses due to their lack of money....
It's better to err on the side of safety for the rich and powerful rather than save the life of your average American citizen. That's one way to make up for the financial deficit.
If Dr. Breen did not react in furious rage at mass murder by medical deprivation to give reassurance to some fat cat ambassador to the UN, well then, she's wouldn't that spirited gal Lorna. Moral laxity, illegal favoritism, bribery?
How does one describe this betrayal of native New Yorkers? Add 20 pieces of silver, to make up for the anticipated annual loss of $450 million in income for fiscal 2020, due to the Wall Street collapse in share values in NYP's stock portfolio....
FRONTLINE FIGHTER: CHRISTIAN ETHICS BETRAYED
Dr. Breen's visible distress and anger on her return from New York to Charlottesville would be difficult for anyone accustomed to the "therapeutic society" that views righteous rage as a fit of insanity. Nowadays the Biblical prophets would all qualify for straitjackets on a diet of antidepressants.
I raise these issues as grounds of suspicion toward an official inquiry by nonpartisan out-of-state investigators once the coronavirus contagion subsides. Her case is important, not just in regard to an individual's life and career but in relation to the fundamental policies and medical ethics of one of America's pace-setting hospital groups, which is representative of the great potential and also the deep-seated problems in health delivery.
The coronavirus contagion has brutally exposed the American health-care system, for all it's high prices and research aims, to be the world's worst medical system in terms of institutional prioritization of basic care, now dwarfed in comparison to most of Western Europe, Canada, South Asia and East Asia, even China.
New York, worst of all, is the black hole of medical care in America, a management disgrace despite the incredible self-sacrifices of the emergency care doctors, nurses and orderlies in this astounding crisis. Praise for the hospital staff must be accompanied by reforms to ensure that loss of life for health employees will never again be repeated due to management policies. Gov. Andrew Cuomo and NYC Mayor Bill Blasio stand exposed as talkers not doers.
Everything about this multiple crisis exposed by the coronavirus contagion demands thorough review and reform, including the roles of the NIH, CDC and the medical research labs and federal health programs that have wasted vast sums on exotic research via USAID rather than tangible improvement of community-centered health care easily accessible to every citizen.
The death of Lorna Breen is an American tragedy, but if her loss leads to much-delayed reform of the health system way beyond the now-expensive palliative of Obamcare, then her loss would not have been in vain and her wishes will be realized by a repentant society that again puts human life ahead of mercenary gain.
---
Related - Coronavirus Researcher Found Shot to Death

Comments for " The Suspicious "Suicide" of ER Doctor Lorna Breen "

This doctor was murdered. Like so many others. https://www.healthnutnews.com/category/holistic-doctor-deaths/

She saw things and was going to talk most likely and the evil filth could not take the chance.

God will avenge. "Vengeance is mine, says the Lord."

The fall of man will be due to one reason and one reason only. The fall of Christianity. I'm not talking about going to church on Sunday.

I mean the destruction of christian principles which is pretty much complete now.

Whether anyone likes it or not the only path to a better world is through real christian values. Without these values there can be no better world. This is why christian's wont be part of the NWO.

Whatever youve been promised its a lie. You will be betrayed. Whether your catholic Jew or Freemason it matters not. The world to come will try control literally everything until it is all destroyed. When you serve Satan "healing the world" is inverted and means destroy it.

If you really wanted to heal the world you would all follow Jesus example.