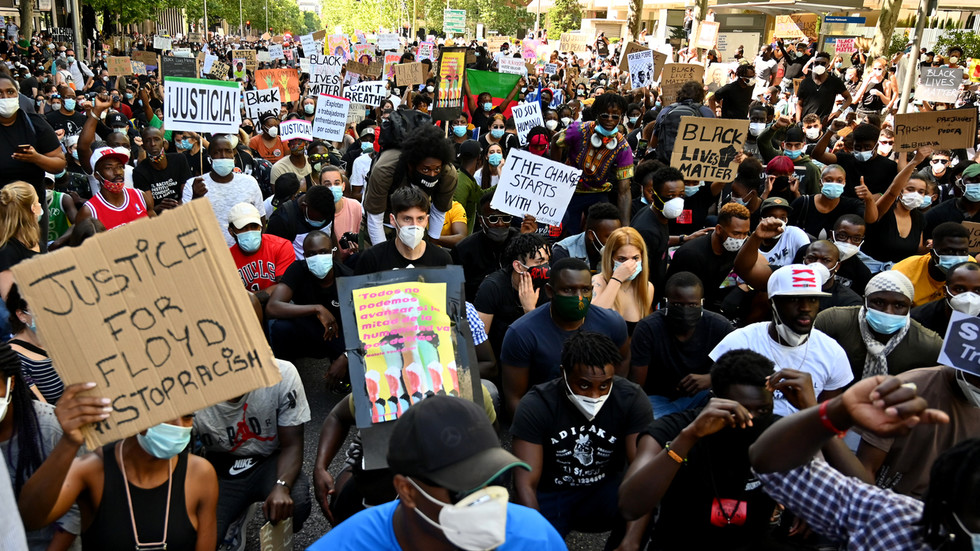 Thousands of clueless young Americans are being used as battering rams to not only topple a duly elected President, Donald Trump but also to actually uproot America's complete US Constitutional order.
Given current events, this is the perfect time for a follow up to my July 3, 2018 article, CIA-Controlled Media Pushing Civil War Narrative and my December 11, 2019 article, Predictive Programming -- US Civil War?
Andrew is a retired attorney living in Texas
By Andrew
(henrymakow.com)
F. William Engdahl's book, Manifest Destiny: Democracy as Cognitive Dissonance (2018) explains how the CIA uses Color Revolutions to defeat enemies of America's corporate elite.
For those unfamiliar with the term Color Revolution, it refers to what has become a standard technique for promoting Regime Change in targeted nations. 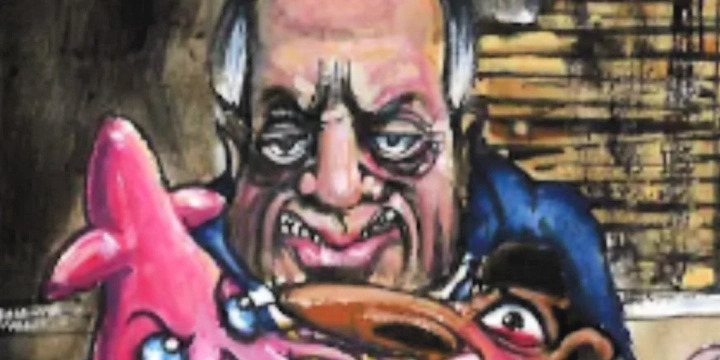 The term was coined by Gene Sharp (1928-2018), who wrote guidebooks on how to avoid the horrific costs of war and military overthrow by organizing populist revolts backed by slick Madison Avenue-style marketing techniques.
Rather than confusing young people with wonky policy matters, Sharp recommended that our CIA should motivate revolutionary wannabes with pop culture, using catchy fact-free slogans, logos, and team colors. His idea was to make a Color Revolution irresistible fun, like a sporting event. Social media, which fosters communication in the form of short, catchy slogans and images that can easily "go viral," has been particularly conducive to Gene Sharp's formula of organizing the masses around advertising copy and team colors.
These Color Revolution techniques were used on a large scale in the former Soviet Union countries, such as in the 2003 Rose Revolution in Georgia or the 2005 Orange Revolution in Ukraine.
Although some Color Revolutions can sometimes be expensive ($5 billion in the case of Ukraine), believers in Sharp's Color Revolution know his techniques are far cheaper than outright military intervention.
Typically, Regime Change through Color Revolutions are orchestrated by a public-private partnerships made-up of government agencies such as the State Department or CIA, combined with private funding from non-governmental organizations (NGOs) that are backed by the Quiet Elite.
An individual often associated with Color Revolution funding and orchestration is the notorious shadow figure, George Soros. His tax-exempt entities, like the Open Society Foundations (OSF) and others, regularly
pump money into the latest Color Revolutions. Not surprisingly, his objectives are more often commercial than strictly political. 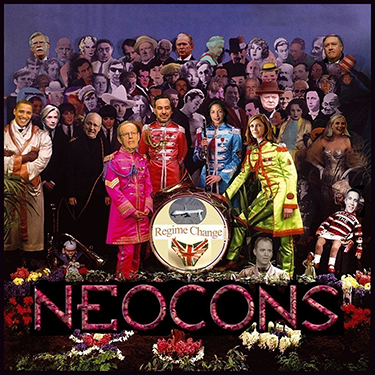 HERE COME THE NECONS AGAIN
Established in 1993, the National Endowment For Democracy (NED) was the first of the Regime Change NGOs. A curious entity, NED is funded by the US Government through USAID as well as from donations by major Neocon private foundations.
NED uses two sub-organizations to disseminate the funds to various Color Revolution projects such as the International Republican Institute (affiliated with the GOP) and the National Democratic Institute for International Affairs (affiliated with the Democrats). Both organizations are involved in the same subversive and bullying activities around the world. Clearly, there is more bipartisanship in America than most people understand or would even want to believe.
After 9/11, Neocons fanned the flames of indignation and xenophobia in order to gain Congressional Declarations of War and assume a dominant role in most American institutions, particularly in our political parties and the mainstream media.
Regime Change fever swept the foreign policy establishment, and anyone (like Congressman Ron Paul) who looked cross-eyed at a Neocon became a target.
Perhaps a surprise to ardent progressives, not only George W. Bush but also Barack Obama embraced the Neocon playbook, giving them virtual carte blanche to carry out Color Revolutions around the world. Does this known fact seem unbelievable?
If the targeted populations can't be organized effectively to overthrow their leaders, there was always the much more expensive option of arming mercenaries to seize power through violence. If all else fails, out and out military aggression can be used without US Congressional authorization such as the 2011 aggression in Libya by the US and NATO.
The most reliable method seems to be a combination of non-violent and violent actions, such as in the case of Ukraine's second Color Revolution in 2014 (a coup which was comically dubbed the "Revolution of Dignity" by the Neocons). These ardent warmongers know that a successful marketing campaign must never be understated. A similar case was the 2019 series of Hong Kong protests where gang violence was used in hopes of provoking a crackdown by China which in turn could be exploited against Chinese Communists for propaganda purposes.
A COLOR REVOLUTION IN AMERICA
According to F. William Engdahl's June 16, 2020s article, America's Own Color Revolution, the CIA, NED, George Soros' OSF, and etc. are now targeting Americans with our very own Color Revolution. Amazingly, Americans are actually bankrolling their own US Constitutional overthrow!
For anyone who has studied those models closely, it is clear that the protests against police violence led by amorphous organizations like Black Lives Matter and ANTIFA are more than purely spontaneous moral outrage. 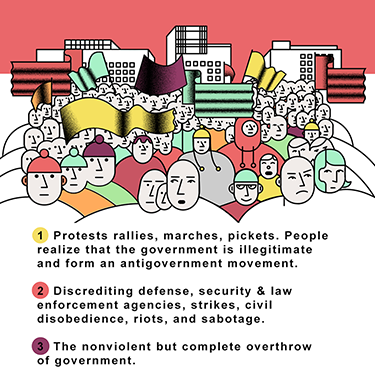 Thousands of clueless young Americans are being used as battering rams to not only topple a duly elected President, Donald Trump but also to actually uproot America's complete US Constitutional order.
The standard Color Revolution methodology was put into play the moment Trump was inaugurated. The 2016 team color was pink, taking the form of pink "pussy hats," ostensibly to call attention to Trump's sexual vulgarity and libertine lifestyle ... which somehow lacked the charm of Bill Clinton's Oval Office sexual capers.
The buzzword was #Resistance, which was intended to conjure up images of the struggle by nations that had been conquered by Nazi aggression during World War II. A comparison like this one would be laughable if it were not so serious. Oddly enough, however, the promise-breaking military moves by Trump against other nations were not #Resisted. In fact, those were the only instances where he received hearty praise from the corporate media (owned by America's CORPORATE elite).
To the ultimate villains, The QUIET ELITE, who control both of America's political parties and all mass media, the way forward became clear: It required the complete overthrow of the American people them along with their troublingly outdated 200+-year-old US Constitution and the silly Bill of Rights. While this may seem OK when applied to the subversion of enemy nations - HOW THE HELL CAN IT BE ACCEPTABLE TO USE A REGIME CHANGING COLOR REVOLUTION AGAINST THE AMERICAN PEOPLE?
This is where Americans must draw the proverbial red line!
---------
24 COLOR REVOLUTIONS OVER THE LAST 25 YEARS 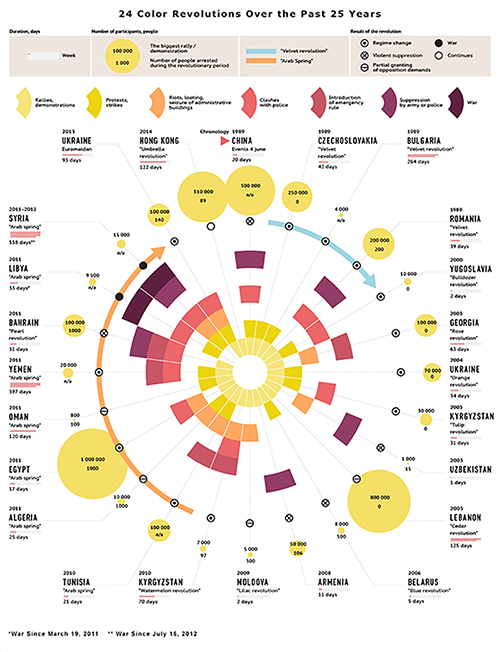 First Comment from Leo-
The phrase 'Color Revolution' is an appropriate term for morphing these 'white western' nations into modern brown & black states. In their new Communist biracial/interracial society the Elders of Zion are forming in the Occident, (which will ultimately be devoid of white goyim) they first have to incrementally eliminate these various white cultural objects, such as statues, merchandise, flags, monuments, etc. Anything that reminds how whites were once predominant & sovereign in history, or that supplies them with some reference of racial collectivism must be banished.
Since their preeminent ambition is to ultimately eliminate the white goyim they must naturally abolish any physical evidence of their past culture or creations. Thus by eradicating their visible history they can erase any latent ethnic identity or unity as their numbers decrease each year. They also can't have their new mulatto & mestizo citizenry being denigrated by having to look up to these statues & symbols of exalted white men.
They realize that the quickest way to achieve these radical racial objectives is simply to invent some fictional hoax news event with hired actors, instead of waiting another 50 or 100 years for it to happen 'on its own'. They always use some staged 'crisis' or black op (Lusitania, 9/11, Sandy Hook, Boston Bombing, et al) to advance their sociopolitical goals. So they fabricated this Floyd scam to inflame the blacks & white degenerates against 'white racism'; thus serving as the rationale for indignation & mass insanity which they direct through their BLM/Antifascist/Communist groups to further destroy 'Caucasian culture'.
JG writes-
The COVID CARTEL and the MSM are very much a part of this plot to overthrow the existing constitutional government of America.
The economy was starting to make a comeback in June and this infuriated the COVID CARTEL deeply. They want to keep the American people on the hook and under their control until their vaccine comes out. They don't want to hear about any cures or signs of recovery due to human immunity. They don't want the economy to fully open because small business commerce creates independence.
The MSM is on a roll again promoting the COVID agenda 24/7 with the usual fear-mongering to keep this mania in your brain.
ANTIFA is the physical arm of this color revolution and that is why the COVID restrictions don't apply to them, including contact tracing. Also, armed autonomous zones are illegal on occupied public or private property other than your own. The rules don't apply to ANTIFA and until that changes this garbage will continue.

want to say that all of this rioting is not about Trump, as the media would like us to believe. I never bought into the idea that there was a "war" between Trump and the Democrat Party. Both are two subordinates of the NWO, so, it is pretty clear that there cannot be any true animosity between the two. Instead what we see are simply theater plays where Trump makes a move, the Democrats make a move against him, and so on. This never-ending drama is played incessantly in order to distract the public - they think if they rail against Trump hard enough, they'll get him out of office & everything will be solved. Conversely, the Rebuttlickans think as long as they defend Trump, he'll take care of us and we'll live happily ever after.

They make everything boil down to fighting for, or against Trump. Meanwhile, the NWO continues on with its unanimous agenda and we don't pay attention because our attention is all on Trump & his so-called "enemies". As a result of our neglect, our overall situation worsens. Now what does this have to do with the recent riots & internal cultural revolution? The "Right wing" section of the NWO media is trivializing the reason for the protest movement. The "right wing" segment of the NWO wants us to believe that it's all a plot to ruin Trump's chance at getting elected again. They want to camouflage the true reason behind the riots (Which is to intensify the push for white genocide). The logic being, if we make the mistake of thinking it's all about Trump, then we'll pay no attention to the agenda for white genocide (the true purpose of the protest movement). We'll thus be sitting around, waiting for the election to come by so that we can vote for him - a move which does absolutely nothing for us White people.