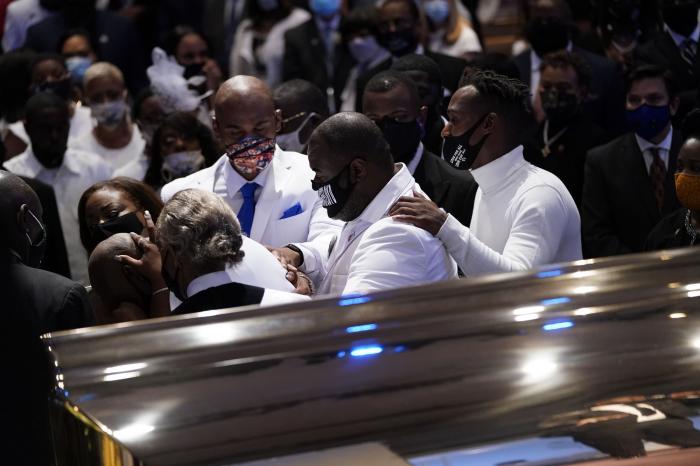 Imagine watching George Floyd's televised funeral with hundreds in attendance after being told YOU CAN'T go to the funeral of someone in your own family, you can't go to church, you can't go to your kids graduation, etc.... imagine watching it and still not realizing you're being played.
"The law forbade more than 10 people at my brothers funeral. George Floyd's funeral was a slap in the face. I'm done being a puppet."
by Anon
Source- Reddit Conspiracy
A few weeks ago, I unexpectedly lost my older brother to a massive heart attack from an undiagnosed heart condition. He was a handsome 38 year old man that took really good care of himself. He had a loving wife and two adorable children under the age of six. So many people loved him and we were all absolutely crushed by the news.
When the media made it apparent that Covid-19 was dangerous, I took all the precautions. I remained in my small apartment by myself for months with no contact. I even said goodbye to my childhood dog through Zoom when my parents (who live 20 mins away from me) were about to take him to the vet to be put down.
It soon became apparent that Covid-19 numbers were not as bad as they projected. What once was a justifiable act of flattening the curve and keeping our hospitals manageable turned into "you are an evil and selfish person if you do not social distance yourself and wear a mask until we find a cure."  Societal pressure made me eat this bullshit. Although I no longer feared my own life, I did not want to inadvertently kill an old lady somewhere. It was my duty as a human to quarantine.
Once my older brother died, my family needed each other more than ever. Social distancing away from each was no longer an option. My immediate family grieved together, but all others had to awkwardly pay their respects from a distance. So many people my brother impacted in his life were conflicted on how to reach out. It was painful to watch. We were all so isolated.
Any other year, I would have expected hundreds of friends and family at his funeral. He was the most charismatic and genuinely loving person in my life. But he died in the year 2020, and the law forbade anyone to exceed the limit of 10 people at his outdoor funeral. Out of the 10 people allowed to attend, one was the priest and TWO were appointed funeral directors. No matter how much we begged and pleaded, their policy was unwavering. They would not drop ONE funeral director so that my sister-in-law's mother could be by her side as she buried her husband's ashes.
As we were still in the process of mourning my brother, that cop disgustingly murdered George Floyd in Minnesota. And thousands of people attended his indoor funeral service led by Al Sharpton. Thousands of people who never met George Floyd were there holding hands and many of them were not even wearing masks. It was a slap in the face.
From that moment, millions of people gathered the streets in protests with politicians. Covid-19 was suddenly an afterthought. The mass media had a new agenda: "Riots are out of control! Cops are beating the shit out of everyone!"
They found a new way of implementing curfews with a new woke message: "if you ain't with us, you are against us."
A message that represented the complete opposite of what they condemned just a week ago. I believe that our black culture is treated unfairly, but this oppression is far beyond any police brutality. But...with a blink of an eye, everyone on social media was a social activist with the answer. If you are a cop, you have no race, you are a racist, and you are the enemy. "Defund and dismantle the police."
---
First Comment by JG
To the author of this article, you can never make sense out of stupidity. It has no mind, morality, or reason. This is how godless dictatorships are formed. A lot of these people don't even know who's pulling their strings or what their agenda really is. They don't care to know either because they are a defeated and destitute people.
Unfortunately ignorance is a contagious disease that can turn into a lethal cancer that inhibits the mind and the soul of the body. Communist countries are a prime example of this. They worship the state but not God. They no longer have minds of their own because they let the MSM do their thinking for them. When this disease of ignorance reaches the higher levels of culture and government the end of civilized life and morality is near.

Comments for "Floyd Funeral Gives the Lie to Social Distancing"

Aside from bombarding whites with endless negrophilia propaganda, it appears that a primary objective of this govt/media Floyd CIA psy-op is to continue removing & disposing of these Confederate statues/monuments. They staged a similar media/crisis actor hoax with that Charleston 'church shooting' in 2015; providing the 'justification' to remove the Confederate flag from the state capitol. Changing the names of formerly white named buildings, parks, streets etc., into new black ones is also transpiring, as they further their sociobiological plans to transform the USA into a new colored communist state, similar to Cuba.

Today the news reported that some park in Portland OR, is now being renamed after some NAACP mulatto or negress. I'm sure this is happening in cities all across the nation. As the white population continues to numerically decrease in the USA (due to colored immigration, nonwhite on white homicides, abortion, miscegenation) so will their heritage continue to be wiped out until both are completely gone.