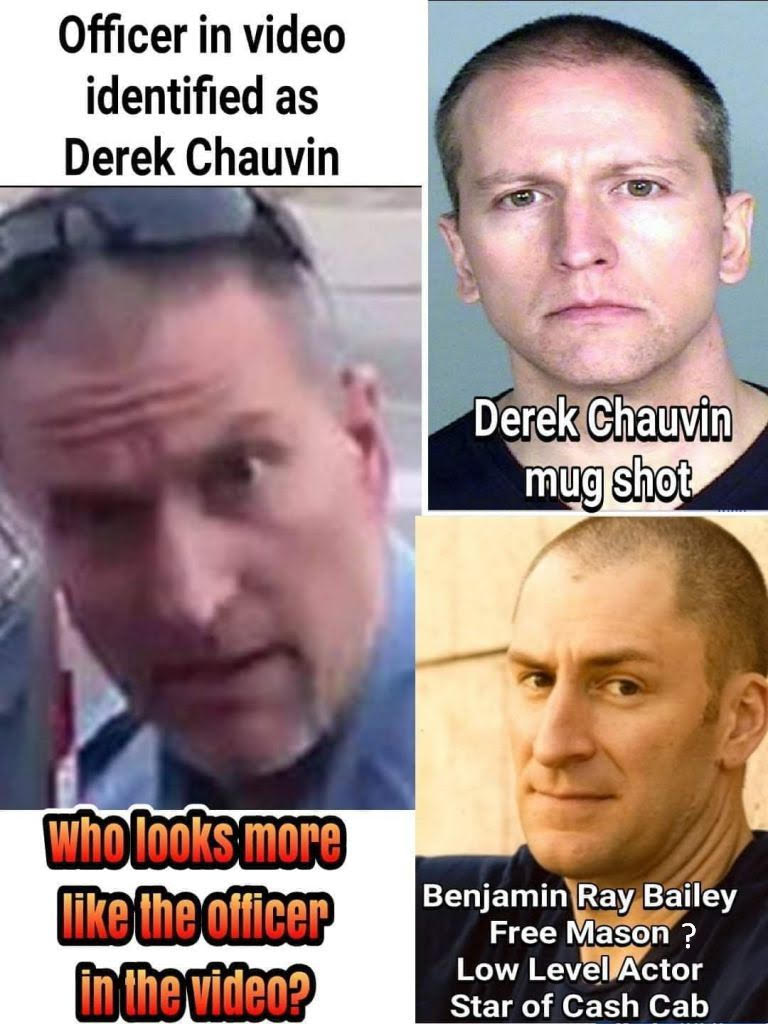 Is Derek Chauvin, actor Ben Bailey?
Then who is this?  But ears do match
Whether Floyd's death is real or not, it's very clear that key facts were hidden by media in order to stoke an agenda of political chaos in line with the Masonic maxim of 'Ordo ab Chao' - 'Order from Chaos'
The police restraint of a figure who had been violent and appeared drug-affected was in line with police practice and policy ... yet the video of Floyd's 'death' was used to create the riot-stoking narrative.
The true facts surrounding Floyd George's "death" are still murky but questions abound.
Latest - Floyd George death Fakes Using Crisis Actors
-------- Comprehensive Video indicates murder was not Faked  (Just the disproportionate response)
----------Another more sceptical analysis of video asks where is the passerby who shot the key knee on neck video?
by Brabantian
(henrymakow.com)
The George Floyd alleged death, and global protest and riot aftermath are highly Masonic events symbolized by the widespread push to Masonic 'take the knee' of submission after a video 'death scene' involving kneeling on the 'victim'
https://www.henrymakow.com/2020/06/taking-a-knee.html
When George Floyd - literally an actor - undressed for his pornographic film star role in the 'Habib' multi-cultural adult video offerings, his chest had a tattoo of what seemed to be a Masonic eagle.
Moreover, George Floyd's famous basketball player-best friend from youth in Texas, so close he is called Floyd's 'twin brother', Stephen Jackson, has posted on Instagram about his 'father's Mason Brothers 33' with a photo of Masonic gear with the All-Seeing Eye, and how he will follow his father.
https://twitter.com/2LarryJohnson7/status/1266896699781459969
Former USA football player, Larry Johnson, outright charges that the George Floyd death was a human Masonic 'sacrifice'
https://www.totalprosports.com/2020/06/01/larry-johnson-exposes-freemason-stephen-jackson-sacrificing-george-floyd-tweet/
Maya Santamaria is a Latina media and entertainment mogul who had owned the El Nuevo Rodeo Nightclub, where policeman Derek Chauvin and George Floyd both worked as bouncers, the club at 2709 E Lake St, Minneapolis ... fellow club bouncers then, partners in staged theatre now? 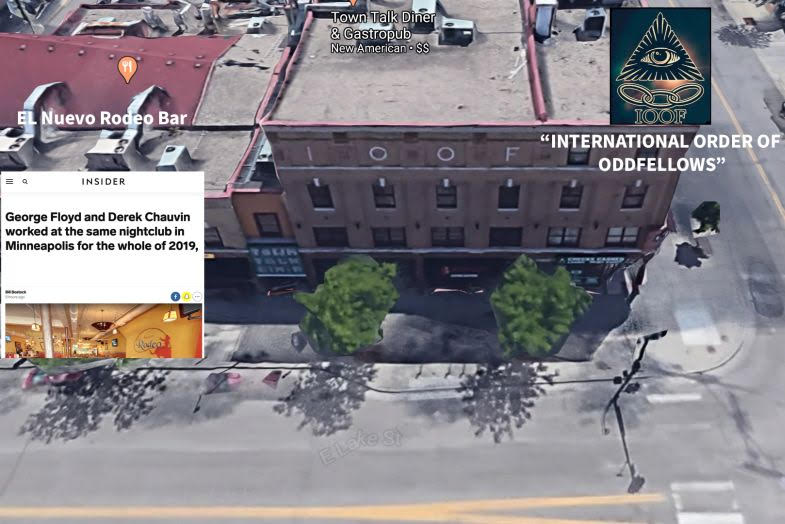 That nightclub turns out to be adjacent to another property also owned by Santamaria, the ancient hall of the International Order of Odd Fellows, at 2701 E Lake St Minneapolis, now called the '27 Event Center', but with the IOOF letters still on the facade
https://www.startribune.com/old-odd-fellows-lodges-thrive-as-neighborhood-connectors/302168611/
Odd Fellows are fully parallel alt-Masons: "The two Fraternities are very similar in symbolism they use, values they share, and the way they began. Both Fraternities use many of the same symbols - the All-Seeing Eye, the Sun and Moon, the Bible, the Beehive.
Odd Fellows have an initiation and degree system much like Masonry, and also use aprons as part of regalia.
"Throughout history, many Freemasons have also been Odd Fellows: Winston Churchill, William McKinley, Franklin Roosevelt, Red Skelton, and USA Supreme Court Chief Justice Earl Warren were also Odd Fellows. Famous Mason Albert Pike, was also an Odd Fellow!"
http://www.midnightfreemasons.org/2015/01/are-odd-fellows-part-of-freemasonry.html
FLOYD'S CRIMINAL PAST
•        George Floyd moved to Minneapolis in 2014 after being released from prison in Houston, Texas following an arrest for aggravated robbery
•        On May 25, 2020, Floyd was arrested for passing a counterfeit $20 bill at a grocery store in Minneapolis
•        He was under the influence of fentanyl and methamphetamine at the time of arrest
•        Floyd has more than a decade-old criminal history at the time of the arrest and went to jail for at least 5 times
•        George Floyd was the ringleader of a violent home invasion
•        He plead guilty to entering a woman's home, pointing a gun at her stomach and searching the home for drugs and money, according to court records
•        Floyd was sentenced to 10 months in state jail for possession of cocaine in a December 2005 arrest
•        He had previously been sentenced to eight months for the same offense, stemming from an October 2002 arrest
•        Floyd was arrested in 2002 for criminal trespassing and served 30 days in jail
•        He had another stint for a theft in August 1998
There is vast deception in the George Floyd narrative, and it seems quite clear that the policeman's knee on Floyd's neck did not and could not kill him.
KNEE ON NECK, STANDARD COP PRACTICE, NOT FATAL 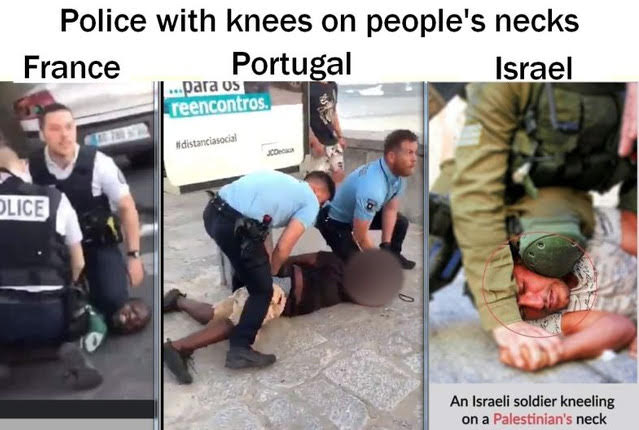 Media is hiding that the neck-on-knee tactic is standard police technique in many countries, and is regarded as 'non-lethal', and was official police policy in Minneapolis where Floyd allegedly died ... so there is no legal basis for criminally charging the police officers in the video. This is a frightening instance of how 'the law' does not seem to mean much anymore if the mob is inflamed to demand your blood
'Minneapolis Police Department Use of Force Policy 5-300, 5-311 - Use of Neck Restraints'
'Neck Hold Used By Minneapolis Officer Was Approved By Department Policy'
https://www.lawofficer.com/neck-hold-used-by-minneapolis-officer-was-approved-by-department-policy/
If Floyd is genuinely dead, what he died from is "arteriosclerotic and hypertensive heart disease, fentanyl intoxication, and recent use of methamphetamine and cannabis", the fentanyl - meth combination being quite a deadly dangerous one, even without having a bad heart
And to tie it all together for scams of 2020, Floyd of course had 'covid-19 coronavirus' too
https://minnesota.cbslocal.com/2020/06/03/full-george-floyd-autopsy-report-released-says-he-tested-positive-for-covid-19/
With the global public not told that Floyd's 'death' was due to heart disease with drug abuse, global protests and riots followed, creating a fear of ethnic near-civil war in Western societies ... the 'chaos' of that conflict, requiring a 'new order' for its solution - Order from Chaos, the Masonic motto fulfilled.
----
Related - Floyd George an Assumed Identity?  Man who claims he was his executor speaks out.
First Comment from JG
First of all, just try to imagine if this incident was NOT given the 24/7 MSM coverage that it has received. There would have been NO LOOTING, NO RIOTING, AND NO MAYHEM. The MSM is negligent for inciting riot and helping spark all the civil disturbances connected with the arrest of George Floyd.
It's time to finally hold the MSM responsible for their actions by putting them on trial for their crimes. Let's ask these questions? 1) Who decides what is shown on the ABC, NBC, and CBS Nightly News and what isn't shown? 2) Who is paying them to run these stories that promote hatred and division?
The MSM should no longer be able to play judge, jury, and executioner of any politician, celebrity, or person they choose who does not fall in line with their perverted agenda. The MSM is a private entity that serves the interests of their oligarchs and not the public.

You wrote " It's possible they must be Masons to succeed, just like Hollywood actors and entertainers."
My dad was a cop in southern California. He joined the force around 1968. I only vaguely remember overhearing a conversation, but my mother and I have talked about this on several occasions, how dad was approached about joining the Masons in order to further his career with the department. To his credit, dad declined. I can't say for certain that was the reason, (he has since passed away) but he was never able to make Sergeant and remained simply an officer until his retirement.

Yes the American hierarchy is embracing cultural marxism. It took decades but all the "right people" are in significant positions and a critical mass has been reached for "change". Unfortunately the vast majority of Americans are far too ignorant to understand the significance of what's occurring thereby guaranteeing it occurs! I believe in the God of Abraham, the God of Moses, the God of David, and the Lord Jesus Christ, for me this is Biblical and it simply is going to play out as frightening as that may be!

Who did the autopsy on George Floyd? If it is an outsider, like Dr M Baden .... then the
autopsy is faked ----> George Floyd is alive & a doppelgänger substituted in his place.

Show me the certificate of death. The coverup (if any) begins with the autopsy.