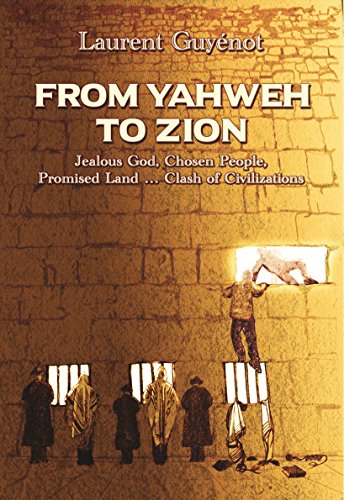 I highly recommend this survey of the Illuminati-Jewish conspiracy from ancient Babylon to JFK's assassination and 9-11.
Published in 2018, the book deftly explains the cancer responsible for 90% of humanity's problems, including all major wars and economic crises. This cancer is the conspiracy of Cabalist (Masonic, Satanist) Jews and Freemasons, both instruments of the Rothschild central banking cartel.
This malevolent power is reaching a crescendo with the COVID 19 and George Floyd psyops and riots.  In a nutshell, these fanatical Jews (and Masons) think they are God and can redefine reality so that humanity will serve them. Satanists are anti-life. They are inverting the moral and natural order with Satan replacing God at the acme. This is what they mean by "revolution."
I chose this excerpt because it shows how Nazi race views were modeled on Judaism.
Nevertheless, Hitler said that Cabalist Jews are not a race but a malignant (satanic) spirit.  It explains how "assimilated Jews" -- Jews who did not join their secret leaders' sociopathic Cabalist plot -- were the common enemies of both Zionists and Nazis, and thus were chosen for extermination. In Hannah Arendt's words, the "majority of Jews inevitably found itself confronted with two enemies -- the Nazi authorities and the Jewish authorities."
This is also the plight of Jews today. They simply do not know that their leadership is evil.
Remember the "Germanwings Fl 9525" co-pilot who, in 2015, locked the pilot out of the cabin and flew into a mountain?
This is our position today. Our pilots are psychopaths, sworn enemies of every race, religion, family, and nation. "We are destroying 'every collective force except our own.'"  (Protocols of Zion, 16-4)
Laurent Guyenot's From Yahweh to Zion provides a concise, fair-minded survey of their millennia-long war against God and the human race reaching consummation today.  He doesn't capture the occult dimension but the historical review is unparalleled.
pp 250-253
"The relationship between Nazism and Judaism was well known in Jewish circles of the 1930s. No one expressed it better than the American rabbi Harry Waton in a book published in 1939 by the Committee for the Preservation of the Jews, A Program for the Jews: Nazism is an imitation of Judaism; Nazism adopted the principles and ideas of Judaism with which to destroy the Judaism and the Jews."
"The Nazis philosophy starts out with the postulate: The blood of a race determines the nature, course of evolution, and destiny of that race....whether consciously or not, the Nazis took this theory from the Bible itself."
Waton goes further still: Hitler's declaration that the Jewish consciousness is poison to the Aryan races is the deepest insight that the Western world has yet achieved in its own nature; and his capacity to realize this is proof of his genius as well as the secret of his power and of the curious fascination which his personality exerts...it is not the practical power or wealth of the Jews that he fears, but the character of the Jewish mind...It is the hidden penetration of the Jewish spirit into the Gentile mind that is the danger; and it is a danger because the 'Aryan' mind cannot resist it but must succumb." 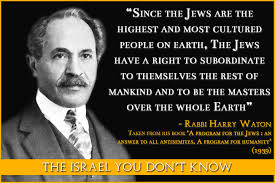 Waton, in fact, misunderstands Hitler's real views on Jewishness, which, in private, were less racist than his own: "We use the term Jewish race," Hitler wrote to a friend, "merely for reasons of linguistic convenience, for in the real sense of the word, and from a genetic point of view, there is no Jewish race...The Jewish race is above all a community of the spirit."
Nazism and Zionism shared more than one ideological foundation; they had as their common enemy the assimilationist Jew. They also had a common goal: the emigration of Jews from Germany. Reinhardt Heydrich, Chief of the SS Security Service, wrote in 1935, in Das Schwartze Korps, the official SS Journal: "We must separate Jewry into two categories: the Zionists and those who favor being assimilated. The Zionists adhere to a strict racial position, and by emigrating to Palestine...the time cannot be far distant when Palestine will again be able to accept its sons who have been lost to it for over 1000 years.  Our good wishes together with our official good shall go with them."
It would be exaggerating to say that Hitler was ideologically a Zionist for he had written in Mein Kampf in 1923, "for while Zionism tries to make the other part of the world believe that the national self-consciousness of the Jew finds satisfaction in the creation of a Palestinian state, the Jews again most slyly dupe the stupid goyim. They have no thought of building up a Jewish state in Palestine so that they might inhabit it, but they only want a central organization of their international world cheating, endowed with prerogatives, withdrawn from the seizure of others; a refuge for convicted rascals and a high school for future rogues."
Nevertheless, the Nazis were largely favorable to the project originally formulated by Herzl, who had boasted in his diary: "I believe I have found the solution of the Jewish Question. Not a solution, but the solution, the only one,"  repeating further that Zionism was "the only possible final, and successful of the Jewish Question."  The first Zionist association inspired by Herzl's book, The National-Judische Vereinigung Koln, declared as its goal in 1897: the Final Solution of the Jewish Question lies therefore in the establishment of the Jewish State..." 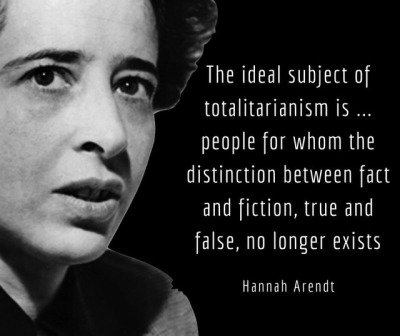 Hannah Arendt has shown in her controversial book Eichmann in Jerusalem (1963), Nazi policy was pro-Zionist until 1938, and " all leading positions in the Nazi-appointed Reichsvereinigung [compulsory organization of all Jews in Nazi Germany] were held by Zionists." This created " a situation in which the non-selected majority of Jews inevitably found itself confronted with two enemies -- the Nazi authorities and the Jewish authorities."
Arend was the first Jewish intellectuals to unveil one of the Zionist's darkest secrets, which has been abundantly documented. (eg. documented by Tom Segev in The Seventh Million.) : "There existed in those first years a mutually highly satisfactory agreement between the Nazi authorities and the Jewish Agency for Palestine -- a Haaavarah or Transfer Agreement, which provided that an emigrant to Palestine could transfer his money there in German goods and exchange them for pounds upon arrival. It was soon the only legal way for a Jew to take his money with him. The alternative was the establishment of a blocked account, which be liquidated abroad only at a loss of between 50 and 90%."
The result was that in the '30s, when American Jewry took great pains to organize a boycott of German merchandise, Palestine, of all places, was swamped with 'goods made in Germany.'" Some 60,000 wealthy Jews benefited from this Haavara Agreement, making a decisive contribution to the Jewish colonialization of Palestine.
----------------
Thanks to Mike, a staunch crusader for truth, for sending this book.
Related    Guyenot - ISRAEL, THE PSYCHOPATHIC NATION
Guyenot - Unmasking the God of Israel
Trump Family Cult Preparing WW3
World Wars are Orchestrated

To me Monsieur Guyenot is a giant of intellect and honesty, and anyone interested in the huge difference between a) (let's call him) the "god" of the Old Testament and b) the Creator of the Universe (to whom most of those that pray think they are praying), i strongly recommend reading the article linked in my first paragraph above. It is the culmination of 78 years of my wandering search for truth on this planet. It is probably also one of the last ones i am able to convey to this forum, because some people think my ideas are worthy of suppression.

I had originally pasted the referenced article from Henry Makow below this introductory text (as i have always done), but decided to remove it because it is fodder for suppression by the artificial intelligence "fact checking" machines. I nevertheless recommend it wholeheartedly to our group, as it is most informative as well.

It is hard to find optimistic news these days, so i prefer to keep quiet until such time as things look better. Herma just told me about reading 5 articles in the British mainstream media, maligning the "racism" of the Dominican Republic against the poor Haitian immigrants. We have lived here for nearly 27 years and cannot imagine a less racist country than this one. There are wealthy, successful and educated people here of all colors. The only thing that matters are brains, hard work, "connections" and ethics, if you want to get ahead. Those fake news from the Guardian etc. are put there by Marduk's ( https://en.wikipedia.org/wiki/Marduk ) "foreign banker" agents to destroy our all-important tourism industry, in order to get everybody to starve and start killing each other, as Mike Adams would say (his latest articles are doozies, considering his now proven predictive track record https://www.naturalnews.com/index.html ).