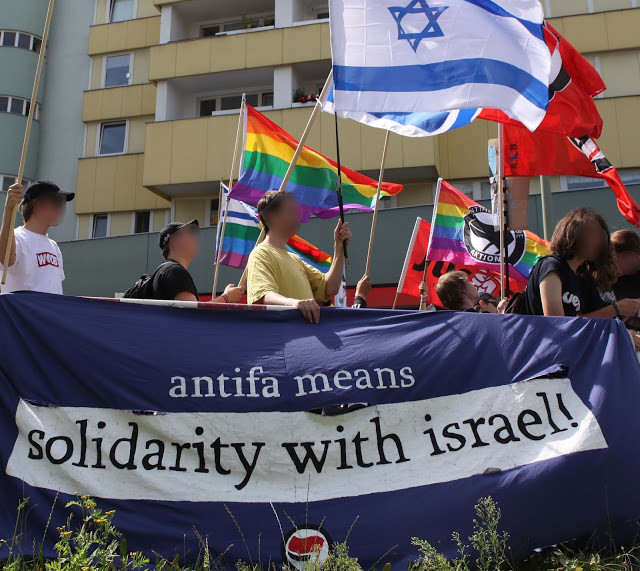 (left, Trump declared antifa to be terrorists)
Clearly millions of Americans have a Communist death wish. CEO's are thanking looters for emptying their stores.
Unfortunately, America's defence is in the hands of Zionist Jews like Donald Trump, who work in tandem with their fellow Masons on the Left. Americans are caught between a Communist rock and a Zionist hard place. Otherwise, Communist Jews like George Soros would have been tried for sedition years ago. And the Commie media would have been regulated or broken up.
"We are witnessing glimmers of the full insurrection the far-left has been working toward for decades. The killing of George Floyd in Minneapolis was merely a pre-text for radicals to push their ambitious insurgency."
Antifa's American Insurgency  (May 31)
Thanks to Snippets & Snappits
By Andy Ngo
(henrymakow.com)
In a matter of hours after the video of Floyd began circulating the internet, militant antifa cells across the country mobilized to Minnesota to aid Black Lives Matter rioters. Law enforcement and even the state National Guard have struggled to respond in Minnesota.
Portland, Oakland, Los Angeles, Dallas and Atlanta are just some of the other cities waking up and finding smoldering ruins where businesses once operated. Nearly 30 other cities experienced some form of mass protest or violent rioting. At least three people have been killed so far.
Antifa, the extreme anarchist-communist movement, has rioting down to an art. The first broken window is the blood in the water for looters to move in. When the looting is done, those carrying flammable chemicals start fires to finish the job.
Footage recorded in Minneapolis and other cities show militants dressed in black bloc ~ the antifa uniform ~ wielding weapons like hammers or sticks to smash windows. You see their graffiti daubed on smashed up buildings: FTP means 'Fuck the Police'; ACAB stands for 'All Cops Are Bastards'; 1312 is the numerical code for ACAB.
Last night, rioters reached the gates of the White House, possibly the most secure location on Earth. There, they chipped away at the barriers piece-by-piece while law enforcement struggled to respond. One Secret Service officer reportedly had a brick thrown at his head. Footage recorded at the scene showed him blood-soaked. Police were eventually able to repel masked rioters by using pepper spray and tear gas. That worked, for now.
The militants uprising across the country want a revolution and they don't care who or what has to be destroyed in the process. If their comrades die, they are elevated as martyrs in propaganda. Death is celebrated. 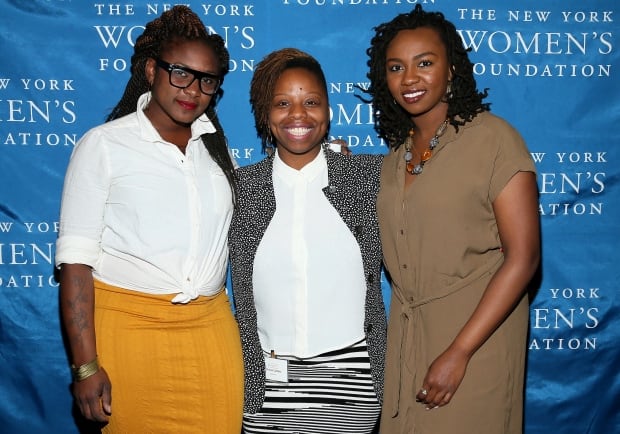 (Feted by corporate America)
At its core, BLM is a revolutionary Marxist ideology. Alicia Garza, Opal Tometi and Patrisse Cullors, BLM's founders, left, are self-identified Marxists who make no secret of their worship of communist terrorists and fugitives, like Assata Shakur. They want the abolishment of law enforcement and capitalism. They want regime change and the end of the rule of law. Antifa has partnered with Black Lives Matter, for now, to help accelerate the breakdown of society.
SATANIST AGENDA
The US is getting a small preview of the anarchy antifa has been agitating, training and preparing for. Ending law enforcement is a pre-condition for antifa and BLM's success in monopolizing violence. Those who are harmed first are the weak and vulnerable, the people who cannot protect themselves. 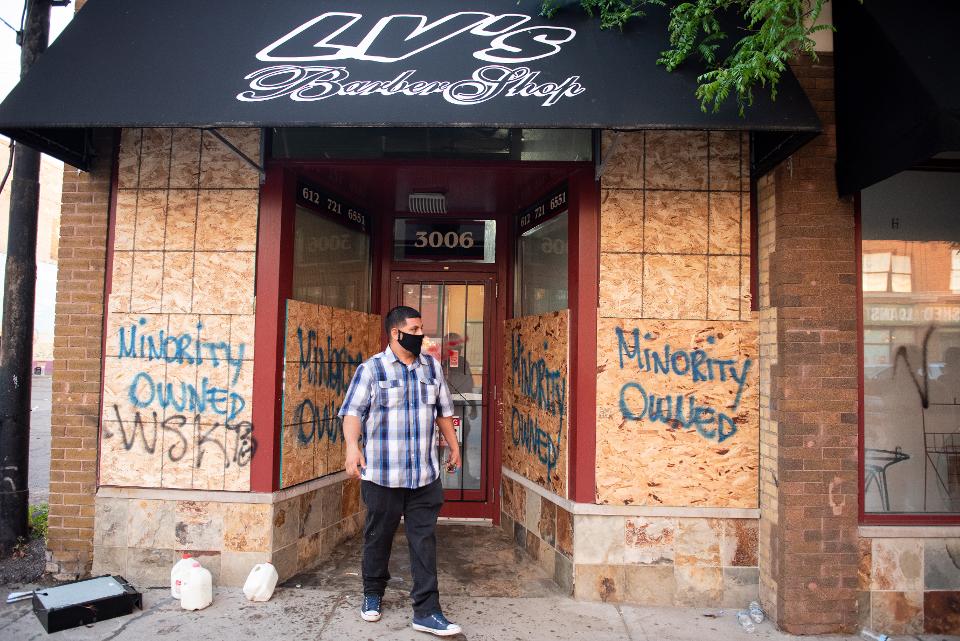 Small business owners in Minnesota pleaded for mercy, even putting up signs and messages in support of the rioters, but to no avail.
The destruction of businesses we're witnessing across the US is not mere opportunism by looters. It plays a critical role in antifa and BLM ideology. Their stated goal is to abolish capitalism. To do that, they have to make economic recovery impossible.
Antifa sees a once-in-a-lifetime opportunity to exploit an economically weakened America during the coronavirus pandemic. It's Going Down, one of the most popular antifa blogs in North America, tweeted on Friday: '10 years from now, people won't look back and ask: "Why did it explode in 2020?"
Massive unemployment while the rich rake in billions from tax-cuts + bailouts, the earth on the brink of collapse + police murdering people daily. Instead they'll ask: "Why didn't it happen sooner?"' 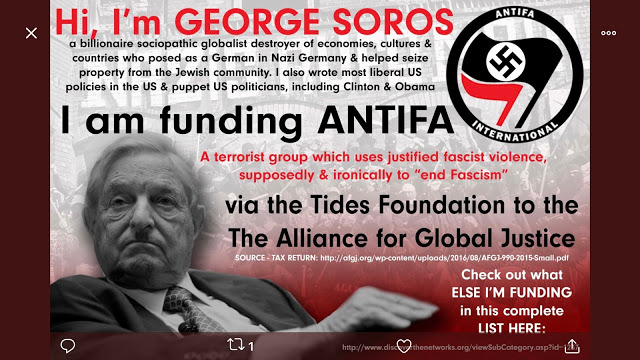 (Unfortunately Andy Ngo fails to mention this)
Antifa are taking actions considered extreme even among their own ranks. On Thursday night in Portland, rioters surrounded a vehicle filled with passengers and shot at it, hitting one person inside. The driver was able to escape but the injured passenger had to go to hospital for treatment.
In Oakland, two federal police officers guarding a government building were shot in an ambush drive-by. One was killed and the other has critical injuries. The following day in Seattle, masked antifa militants stole a rifle from a police vehicle before setting it ablaze.
Media, politicians, the public ~ all of us ~ have underestimated the training and capability of left-wing extremists, who are united in purpose. All the parts of rioting serve a purpose. Looting and fires destroy local economies. Riots can overwhelm the police and even the military. All of this leads to a destabilized state.
------
Related-   Soros Bio
First Comment from Ken Adachi
John Whitehead of the Rutherford Institute sees the picture more clearly than this guy, who buys into the Antifa rhetoric and Revolutionary Party Line Playbook - hook, line, and sinker. What isn't being mentioned here is that this mayhem is being ALLOWED to flourish. It's as if the police or the FBI  or NSA, or intelligence agencies have NO IDEA who orchestrating this activity; or who's dropping off the pallets of bricks; or who's passing out the money to the black street rioters, etc. etc. These low life, street level morons could be stopped on a dime -- if the  government or police WANTED to stop them. When you have a St Paul cop named (((Jacob)))) Pedersen caught red-handed on video smashing the windows of an Autozone store which set the stage for further rioting and destructive activity then you've got SERIOUS police COLLUSION  in orchestrating and abetting these riots.
See: This Is Not a Revolution. It's a Blueprint for Locking Down the Nation | By John W. Whitehead
"Unfortunately, we are now being ruled by a government of psychopaths, scoundrels, spies, thugs, thieves, gangsters, ruffians, rapists, extortionists, bounty hunters, battle-ready warriors and cold-blooded killers who communicate using a language of force and oppression.:"
And watch this 16 minute Youtube interview with John Whitehead from Spiro Skouras to get a clearer understanding of what's taking place.

Antifa and BLM are funded from the same source. BLM is ran by 3 lesbians so it doesn’t represent all black people. Anything in solidarity with Zionist Israel is the synagogue of satan.

Andy Ngo needs to remove Assatta Shakur’s name from his mind with his dumb azz statement.

Trump declares Antifa as a terrorist organization, but fails to investigate and arrest Soros, the funder and the trainers of Antifa. I agree 100% with the article written by the Indian american attorney in NY. Black's are used by fake J's as handlers in torture of targeted individuals and they have the technology handed to them to do so.

Thank you for your efforts in blazing the Light.

Lumpenproletariat Marxist riots serve to create chaos, dissatisfaction and insecurity. They don't need coherence, they just pave the way for leftist political "solutions" later.
Antifa is a one hundred year-old strategy.
They know what they are doing.

The low standards of current education has meant that very few people understand the support that high finance has historically given to socializing revolutions. Those who imagine that insurrections are unplanned spontaneous events have failed to "follow the money". For example, the Russian revolution in the early twentieth century was financed by New York banker Jacob Schiff. The bankrolling of chaos with the goal of seizing and concentrating power in various countries seems at present to be being played by George Soros. You should ask why politicians and the media are not exposing this.