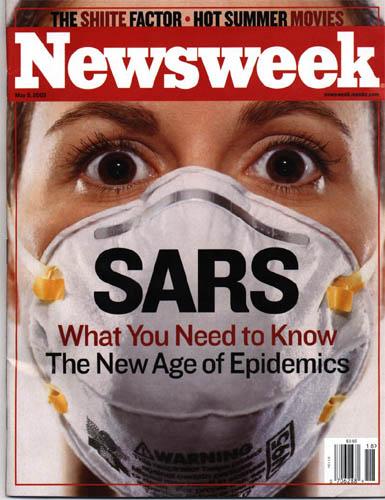 Deaths related to SARS in Ontario in 2003
were approximately the same number as COVID.
The only thing different from 2003 to 2020 is
the fear-mongering media parroting incorrect 'data'
supplied by the WHO, and the agenda is complete
and utter governmental control.
by Sandra Gwynne (on Facebook)
(henrymakow.com)
During the SARS epidemic in 2003, Ontario was hit pretty bad - especially the GTA.
The only place citizens had to wear masks, was, if they had to go to the hospital.
I know, because I had to bring my baby to emerg, where they had 2-3 PPE covered nurses OUTSIDE the doors, taking temps, asking triage questions, and giving people masks.
Since my son was 11 months old, with a fever of 106, he was rushed right in.
Thankfully, he didn't have SARS, neither did I, but because it was a Severe Acute Respiratory Syndrome virus, that affected the elderly and those with underlying conditions, these were the precautions being taken.
He had come down with another viral infection called Mononucleosis.
The teenage girls at the cottage two weeks before were sharing their popsicles, Freezies, ice cream cones with him. That's how he caught the Mono virus, at 11 months old. The good news is, he will never get it again because his immune system built up anti-bodies.
Deaths related to SARS in Ontario in 2003, were approximately the same number as COVID.
The only thing different from 2003 to 2017 is, the fear-mongering media parroting incorrect 'data' supplied by the WHO, and the agenda is, complete and utter governmental control.
In 2003, the only place I had to wear a mask, was if I was in the hallways. The Dr. who was examining my baby didn't have a friggen mask on, after it was concluded that he didn't have SARS.
So, why the mandatory masking for ALL citizens in 2020, who are shopping, eating in a restaurant or going about their daily business, when at the highest peak of the so-called 'pandemic', we were being "ordered to social distance, wash our hands and not touch our faces"?
I walked into my local convenience store earlier this evening to purchase my weekly lottery tickets. I've been going to this store, every Tuesday for the past 2 years.
There was a masked lady in front of me, and I respectfully stood back from her. The poor woman behind the counter (unmasked, but behind a sheet of plastic), couldn't understand a word the masked woman was saying - her words were so muffled.
I shook my head in sadness, as I considered the lemming mentality exhibited by the citizens of my community; my country, who are so willing to give up their rights, all because of a fear-mongering campaign, orchestrated by the UN, delivered by their puppet arm World Health Organization, in order to complete their New World Order Agendas 21/2030, as written by Canadian dirt napping Maurice Strong - BFF with communist Pee-Air, and the Jewish Nazi, George Soros.
Interesting fact: Pee-Air's BFF Maurice, died in China where he had been living since after Pee-Air died. It would be interesting to know if Justin had contact with Maurice before his death. There are numerous pics of Justin with Soros.
This is a conspiracy, my friends.
A conspiracy that was derived from the Strong/Soros Agenda 21 manifesto, upgraded to Agenda 2030 by the UN, and Canadians have a "leader", who is doing everything he can to sell us out, using a fake "pandemic" as his justification.
Shame, shame, shame on all of you for drinking the Koolaid.
--------
First Comment from C
Thank you for saying something to your subscribers!  I for one never fell for any of it....not one teenie tiny bit.  I know to much of the agenda and the players to fall for their schemes.  Anything that is screamed from the media is a dead giveaway.
There is NO VIRUS.  5G? YES!
why else is there social distancing? Better to target you with is my assumption.
Leave phones at home whenever you go out....for starters.
I won't wear a mask!
Jerry -
Have followed you for a long time and some others, finally come to a conclusion, most people are idiots, some members of my own family, nobody wants to face the truth, an ostrich with their heads stuck in the sand. Well I am only one person but here is how I am fighting this COVID scam, I do not wear a mask, I do not wash my hands, I do not use my debit card or my credit card, I go to an ATM machine get cash and pay for everything with cash as much as possible, no record of my purchases, as for the mandated wearing of a mask, washing hands all the other crap being imposed on us when going into a public facility, I am not going there, I will make arrangements for delivery services for what I need and pay with cash, it is still legal tender and any merchant much except it. I am a one-man army doing my part to fight the evil around us to keep our God-given right for freedom and the holy spirit.

Comments for "Shame, Shame, Shame on all of you for Drinking the Kool Aid!"

Fuck the JWO and their plannedemics.
As Trump crushes the Paedos, the Moosad control.over humanity will evaporate.
Drazzledrip is Trumpies Trump card that will.change EVERYTHING.

President Trump has recently ordered the COVID test results to Washington before they are examined by the CDC. This is a good idea. Why all of a sudden have the COVID numbers been blown off the charts lately? Has the test been modified to widen the scope for positive test scores? The CDC has had a free hand in numbering the alleged positive results for far too long. They have an agenda to push this vaccine at any and all costs and that they are doing.

One day this Halloween Party will come to an end. The money will run out and the government will no longer be able to juice the hospitals with outrageous sums of money to keep this game going.
You can't suppress the truth and the God-given liberties of people forever.