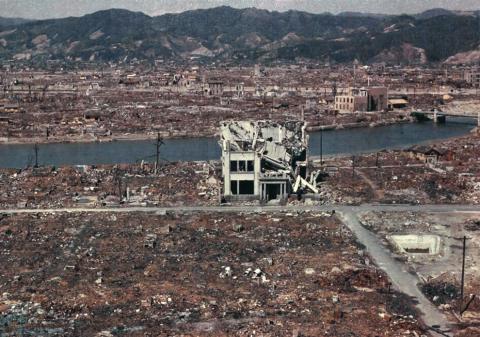 Hiroshima aftermath- Disclaimer: I reserve judgment
"Ten countries in total have claimed to have nuclear weapons,
and this is actually the scary part of the hoax,
showing how major world governments collude."
by Brabantian
(henrymakow.com)
Quite seriously, nuclear weapons have never existed. Hiroshima and Nagasaki were only two more horrible urban napalm fire-bombings, less devastating in fact than the one that hit Tokyo five months earlier - but re-packaged with a fake story of a 'new awesome weapon'.
August 6 & 9, 1945 began the biggest hoax in history, helping oligarchs steal trillions from hapless taxpayers.
Before detailing how Hiroshima was a fraud, consider that the mushroom cloud we associate with 'nuclear blasts', is an ordinary result of chemical explosions, as you see in the above photos of when factories explode.
The old 'nuclear explosion' photos and films are often obviously fake when examined now with modern tools, mixing a chemical explosion image with a background.
The devastation you see in Hiroshima and Nagasaki - where indeed tens and hundreds of thousands died or were horrifically maimed - is exactly like in Tokyo or other Japanese firebombed cities, because houses were mostly wood.
Swedish engineer Anders Björkman, born 1946, has worked to expose the nuclear weapons hoax for years, arguing they are technically impossible. Björkman's website.
NAPALM
US & WW2 allies began chemical napalm attacks in July 1944 on Tinian Island but soon escalated to destroying entire cities, with the biggest killing over 100,000 and destroying 41 square kilometers of Tokyo on the night of 9-10 March 1945. 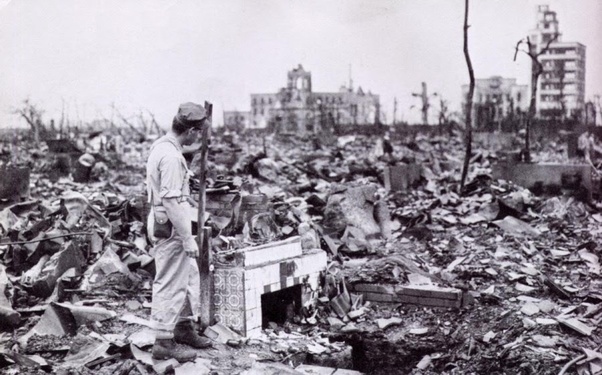 The horror of that Tokyo night, which seemed to make a great city just evaporate, emboldened the USA to pull off the nuclear weapons hoax, first with the 16 July 1945 'Trinity nuclear test explosion' and then the August 6 and 9 respective firebombings of Hiroshima and Nagasaki.
Alexander de Seversky (1894-1974), in youth an ace pilot for Russia's Tsarist Navy, emigrated to the US and became involved in military aviation there. He visited Hiroshima and Nagasaki shortly after the 'nuke blasts', talking to witnesses, and in a Reader's Digest article in February 1946 - let on between the lines that the 'nuclear weapons' were fake. He avoided saying so directly, but pointed out that, "To my surprise, Hiroshima looked exactly like all the other burned-out cities in Japan." Directly under ground zero, Seversky saw "buildings structurally intact, topped by undamaged flag poles, lightning rods, railings, signs, and other comparatively fragile objects ...  I could find no traces of unusual phenomena ... It simply is not true that matter was vapourised ... tree trunks and walls with growing vines disprove the claims of superheat ... it was fire, just fire, that took such high toll of life."  http://www.heiwaco.com/bomb1.htm
German Jesuit Rev. John Siemens, an eye-witness in Hiroshima, documented local witnesses reporting multiple planes spreading incendiary material, the classical firebombing. Japanese survivor stories confirm as well that it was firebombing horror. However officially, Japan goes along with the nuke bomb hoax, as they must.
The smoking gun came a few years ago, when WW2 air combat logs were exposed, showing that on Hiroshima bombing day, a USA 66-aeroplane fleet - a typical size for urban napalm firebombing - was sent out to 'bomb Imabari Japan' that day. But tiny Imabari no longer existed, wiped out in two previous firebombing raids on 26 April and 8 May. This log entry covered for the bombing fleet hitting Hiroshima about 55km away, a target which was not to be disclosed under penalty of death.
A 1990 medical study of Hiroshima-Nagasaki survivors and their descendants, found no noticeable genetic damage or cancer increases, etc., of the type we are led to expect from 'devastating nuclear bomb radiation'.
Illustrating how ridiculous 'nuclear weapons' became, here is an early 1960s video, of the US President's brother Robert Kennedy, viewing a 'nuclear weapons' blast whilst sitting a short distance downrange in a folding chair, watching detonation of the small 30kg or so 'nuclear bomb in an artillery shell', the 'Davy Crockett'
Ten countries in total have claimed to have nuclear weapons, and this is actually the scary part of the hoax, showing how major world governments collude. First to join was Stalin's Soviet Union, secretly propped up by the profit-seeking US military machine, which, as Antony Sutton exposed long ago, wished to have 'The Best Enemy Money Can Buy'. Here, briefly, the history of 'nuclear weapons' hoaxes:
1945 - USA HAS NUCLEAR BOMBS
1949 - COMMIE RUSSIA HAS THE BOMB, Soviet elites got permanent rewards for playing along
1952 - UK Brits & City of London don't want to be 2nd class - UK HAS THE BOMB
1960 - France chafes not to be 2nd class to Brits - FRANCE & DE GAULLE HAVE THE BOMB
1964 - China upgraded to major league - COMMIE CHINA HAS THE BOMB
1966 - Israel joins the club in time to blackmail Arabs in 1967 & 1973 wars - JEWS HAVE THE BOMB & ARE READY TO SAMSON OPTION EVERYBODY
1974 - India even gives joke name to its bomb program, 'Smiling Buddha' - INDIA HAS THE BOMB
1979 - South Africa's white apartheid gov gets to play - WHITE RACIST SOUTH AFRICA HAS THE BOMB READY TO KILL BLACK PEOPLE ... but 'dismantles bombs' before Mandela & black government can find out the scam
1998 - Pakistan becomes a player - PAKISTANI MUSLIMS HAVE THE BOMB & TERRORISTS MIGHT GET AHOLD OF IT
2006 - North Korea, always making deals, gets to upgrade - CRAZY NORTH KOREA HAS THE BOMB
As the New World Order looms, they have begun to wind down the hoax, the UN already working to 'abolish all nuclear weapons' ... The Pope will likely be in Jerusalem, smiling with pride about helping to eliminate, what never existed.
CONCLUSION
Certainly, nuclear power is real, as well as dangers of radioactive poisoning, etc, from things such as the 'depleted uranium' tank-piercing weapons made with by-products of nuclear fuel production. Nuclear 'testing' can be some combination of conventional explosives, chemicals, and nuclear fuel material, making craters and the boom recorded by seismographs. 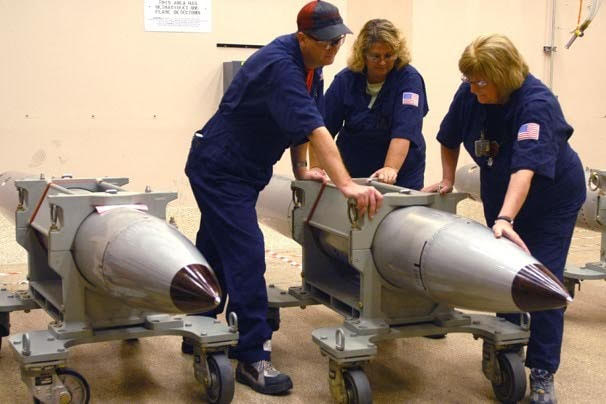 Comments for "Illuminati Hoax? Nuclear Bombs Do Not Exist"

Something doesn't add up here. If nukes were fake, Talmudists would have been inside, outside, beside, in front, behind, underneath, and on top of the fake. In fact, the whole bomb-making was a nest of them. But Begin had JFK murdered because he would not allow Israel into the U.S. nuke making. So Begin was kept out of the lies? Give me a break!

Further to the article on nuclear bombs, I would add the work of Bruce Cathie. A now-retired air NZ pilot. He started to plot out UFO sightings and found their connection to the earth's natural energy grid which the soviets had just found. This let him to harmonics. Frequency. Short of the story is he was able to predict when a nuclear device could be detonated. The local harmonics which are constantly shifting have to be right or else forget it. Big dud. The explosion is a brief doorway into other dimensions. Lots more to it. Check his work out. Enjoy your website. Keep up the good work.

Love your site and your work! A couple of anecdotal facts in your latest article No Nuclear Bombs. My father was an intelligence officer in a Strategic Air Command wing, responsible for giving the pilots authentication codes to be used if nuclear weapons were to be deployed by the B52 bombers over Russia during the Cold War.

My father told me about this duty before he passed. Also, Amarillo TX has a nuclear weapon processing facility, Pantex. Also, I talked to a former GI who witnessed Nevada test explosions. They were equipped with radioactivity detecting dosimeters. Then there are all the Army training manuals and equipment for troops to fight in radioactive environments. Way too much counter-evidence to claim nukes don’t exist. I could say more, but can’t for security reasons.

For many years a Kiwi mathematician, Bruce Cathie, maintained that a nuclear war could never happen because the bomb must be in a certain place on the earth's surface in relation to the sun before it could be triggered.

Slightly different to Brabantian's 'there were never any nuclear explosions' I know but nevertheless quite similar. He is said to have written seven books on similar subjects so I'm sure he has much more detail in one of them.

My father-in-law was among the FIRST GROUP OF FORCES TO LAND IN THE SOUTH OF JAPAN AT THE END OF THE WAR. I ASKED HIM THE DIFFERENCES BETWEEN HIROSHIMA/NAGASAKI AND TOKYO REGARDING THE DEVASTATION. HE SAID THERE WAS NONE; THE 3 CITIES ALL LOOKED THE SAME AS TO THE CARNAGE.

The devastation you see in Hiroshima and Nagasaki - where indeed tens and hundreds of thousands died or were horrifically maimed - is exactly like in Tokyo or other Japanese firebombed cities, because houses were mostly wood.

Without providing substantiating links, what about those Marshall Islanders who were poisoned by the nuclear testing and radiation levels are still high?

Even assuming that the Japanese cities were firebombed only, the islanders are a different story because there is lingering high radiation and mortality rates.

There are some scary documentaries about the Marshall Islands.

The nuclear bomb propaganda films were made here, https://en.wikipedia.org/wiki/Lookout_Mountain_Air_Force_Station Lookout Mountain Airforce Station, which is in effect in Hollywood where all the best of the best in movie making and special effects were/are located.

For the past several months I have been thinking this same exact thing. All my life I’ve heard about these bombs. If they were in fact what they say they are, I’m sure we would’ve seen modern Israel blow all kinds of lives apart

I also believe that the idea of a nuclear bomb is a hoax. I'm not convinced that nuclear energy is a hoax. I should point out that all explosions involving heat will produce mushroom clouds. In the right conditions, you can see them if you light firecrackers on a dry dusty surface.