Open Letter to a Pusher of Face Diapers 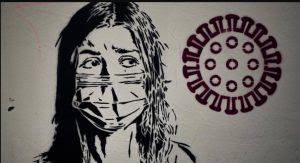 "A reader has been compelled to decline a position of leadership in his church due to a Fear Masks Mandatory policy imposed by the church leadership. He wrote an Open Letter to the church explaining why he could not accept the position, given the Fear Mask Mandate. His letter is worth publishing here since it touches on an issue that affects all of us, everywhere."
"Masks Mandatory is a policy that I feel prolongs the COVID-19 hysteria and paves the way for the ever-increasing governmental intrusions."
Open Letter to a Face Mask Pusher
by Eric Peters
(abridged by henrymakow.com)
"It is with regret, but with a sense of conviction, that I must remove myself from consideration for the Secretary position at [the church].
At the end of March, my job was cut due to lack of business from -- what I consider to be -- the mass hysteria surrounding COVID-19, perpetuated by the media & governments, including ours here in Ohio.
This irrationality has led to record-setting unemployment, more infringement on civil liberties than I have seen in my lifetime, more corresponding government overreach, and the disturbing trend of "informing" on fellow citizens. 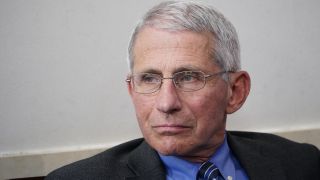 National health adviser Dr. Anthony Fauci has publicly stated that he would favor "immunity cards" or "vaccination cards" for Americans to "prove" they are not infected by or carrying the virus. This sort of step would, in my opinion, open the door to unprecedented government restrictions on freedom of movement, financial activity, and other rights.
Against this backdrop, I was disheartened to see that the annual meeting would be "Masks Mandatory" for those who wished to meet at the church and that the Wednesday gathering would have the same restrictions. Masks Mandatory is a policy that I feel prolongs the COVID-19 hysteria and paves the way for the ever-increasing governmental intrusions I mentioned above.
Toward that end, I will not be attending any services, events, or meetings that are Masks Mandatory, and even attending virtually, especially to be elected to a position, would to me be giving endorsement to the policy and adding to the fear and hysteria it fosters.  I also will not be contributing financially to [the church] so long as such a policy is enforced or promoted by church leadership...
I replied to my correspondent as follows:
Dear Chris -
I applaud your decision and the caring, yet the incisive way you conveyed your reasons for it.
I particularly liked that you made the point about perpetuating unwarranted fear - something which ought to be a concern to people seeking comfort at a church.
Are we to live in perpetual fear?
Because that is ultimately what this is about. An unseen "threat" that could be anywhere, might strike anyone - like "terrorism" - only even more alarming because invisible and fundamentally something that cannot be defeated. People are going to get sick - from this virus and other viruses. Some will die. Eventually, we will all die. But getting sick is part of life - and to destroy life over the irrational fear of sickness is . . .  sick.
It means perpetually living in fear.
Who benefits from this? The pastor repeats the argument that Fear Masking is "about protecting our fellow humans," which I italicized for emphasis. 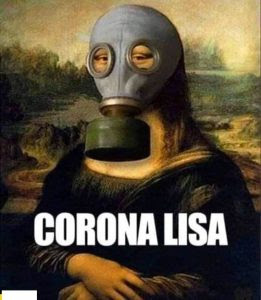 This of course is false on the face of it as Fear Masking by people who aren't sick doesn't protect any human and in fact harms them greatly by creating the impression of ubiquitous sickness.
Seeing "sick" people everywhere fosters the false impression of danger everywhere. This creates mental sickness - a neurotic fear of getting sick. Which makes people miserable as they cringe in fear of "germs" and "dirty" doorknobs and accepting of being treated like lepers. Or rather, leprous cattle.
Sickness Psychosis is sad enough when it afflicts a few people - e.g., the comedian Howie Mandel. But when an entire society is pressured to emulate the behavior and - inevitably - assume the bizarre routines and rituals of mentally ill people? How sad. How pathetic.
How dangerous.
One of the horrific consequences of Fear Mask acceptance - if it is accepted - will be that normal/reasonable non-neurotic people will be first characterized as "uncaring" (as your pastor passively-aggressively implies you are) and, inevitably, as criminals.
Well-meaning (but unthinking) people like your pastor do not understand this danger - despite the logic being very obvious.
If it is accepted that Fear Masking is "about protecting our fellow humans" then it is a threat to other humans to not wear one.
If so, that cannot be allowed - and violators must be punished. Or at least, sequestered and quarantined. Forced to submit to vaccinations. The whole population must accept limitless diminution of their (former) liberties on the basis that they might be sick and could pose a "threat" to "their fellow humans."
There is no end to this, once the principle of presumption is accepted. This whole business is diabolically clever in the way it has weaponized fear, demoralized people, and turned so many of them into people who are not only desperate to signal their misplaced virtue by bending the knee to arbitrary authority - but demand we all bend knee to it. 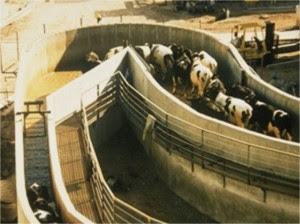 (left, goyim, "cattle")
Solzhenitsyn wrote about this - warned about this - that most people won't do evil things unless they can be convinced that evil things are good things. As in, it's a good thing to deport the Kulaks. It is also worth noting that the German Nazis regarded Jews and other enemies of the regime as a biological threat to the regime; as bacilli that had to be exterminated in the name of hygiene.
Of course, most people have never read Solzhenitsyn - and the only thing they know about Nazis is the cartoonish image of goose-stepping stormtroopers and that they were "racists."
They may soon get a refresher course in both.
It is critically important that Fear Masking be curb stomped - for reasons of mental hygiene. If this becomes the "new normal" America is over. It cannot be over-emphasized. The theater is designed to condition the populace to accept insanity - and tyranny.

Comments for "Open Letter to a Pusher of Face Diapers"

While I believe this C-19 crap to be man-made, and it has an evil agenda, I'm not so stupid to realize there are people who are very sick because of it. So, being old and having multiple autoimmune diseases, I choose to wear a mask in public. I call it a safety factor, so in your eyes that would make me a dumb sheep, I guess. Would I ever take a shot or some stupid drug they come out with, that is supposed to be a cure-all, hell NO! But, I will wear a mask for public places, if I have to go out. Maybe stupid in your eyes and others, but I call it trying to be preventive. I have enough health problems without inviting more unnecessarily. Sue

.my “protest” if you will, is simply that I don’t wear masks in optional places. We do wear them to doctors offices. I think that the few of us citizens who don’t have masks on really do make our “statement” that we don’t buy the mainstream narrative, that masks prevent Covid. Fact s, masks cause more problems than they protect one from.

A bitter-sweet story today. I applaud the author for taking a stand and making it public. Serving would have been fun, but taking a principled stand is the right decision. True leadership isn't a popularity contest.

I drive OTR on a dedicated run from PA to TX. I've been thru 10 states, 10 times since this "health crisis" started, and if I didn't know what 'gaslighting' was, this alternate reality would be confusing.

Last week when I got home, my wife told me my daughter was driving up from SC and the picnic/party invites had already been broadcast to family and friends. I was excited until she uttered the "mandatory mask and social distancing " mantra. I politely responded, "mandatory for you, maybe, but not me. Everyone will be able to decide for themselves, but I'm not wearing a mask in my backyard, period."

My daughter is an ICU RN and heavily invested in the narrative, so my wife was kind enough to warn me in advance. My suggestion was that she remind our daughter that while here, she is a 'guest' in our house. (For the record, my relationship with my daughter is great.)

Many years ago, after a heated debate in a sales meeting, my boss put his arm around me and said "If we both agree on everything, one of us isn't needed...and I'm (my boss) not going anywhere." A teachable moment for me. Everyone thought I was going to get canned but instead, my territory expanded and I constantly got assigned 'special projects'. We got along great after that one confrontation.

People don't always have to agree. We're different people with different life experiences. But we should be able to entertain conflicting or opposing ideas in our minds and discuss issues without losing our sh*t.

The 'mandatory mask' episode ended nicely as later that evening, I overheard my wife (on the phone) say "Masks are optional." Win!

Thank you once again spreading the "Truth of the Matter."

Anthony Fauci is one evil S.O.B. All your readers should spend the time

to read up on who is really is, where he was educated, and who is his
"real boss."

This entire fiasco is being thrust upon us to destroy our society. Our
way of living life.

Resist, don't fall for the lies.

Regards, Be Safe, and don't ever quit.

1) The first is to accommodate those who live in fear and would be disturbed if I didn't. I, of course, also pity those people. By the way, there are a terrible amount of people nowadays who are immune-compromised, in case you haven't noticed because I'm sure an entity like the Chinese government has noticed.

2) Fighting the mask policy is a distraction. It would be like trying to stop a raging bull from charging by trying to grab its wildly-moving tail. It really has nothing to do with what's happening. What is happening is that a great Satanic deception and oppression is taking place and this is not going to be fought by causing momentary affliction to some mask checker. It will only be fought through much prayer and fasting and Godly living. On a secondary level, there will be massive amounts of time and resources spent in message writing to politicians, media outlets and friends on social media. As well, it will probably take other of our free time in riding associations and political involvements. Protesting about masks at some checkpoint will only end up being a time-wasting distraction that might deceive us into thinking we are DOING something. My opinion.

It was heartening to read the article by the man protesting his church's mandatory mask policy. I too have been disturbed by the passive acceptance of government restrictions by the churches. Recently, while lying in bed at night, I wrote a poem in my head. It may not be great poetry, but it makes a point. Here it is.

The State's demands are made --
And quickly the Church takes a knee.
None are so surely enslaved
As those who believe they are free.