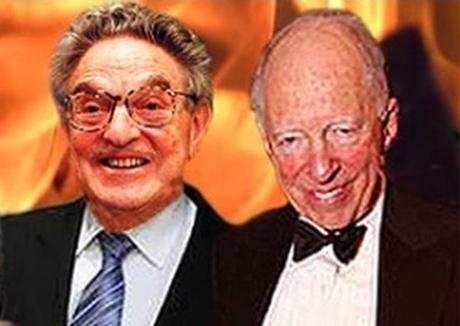 (Jacob Rothschild, right, with his chief go-fer George Soros)
Reparations to the descendants of black slaves
obscure the real debt the Rothschilds owe to humanity.
by Henry Makow PhD
A Tentative Invoice
World War Two - Ten trillion (includes Dresden, Hamburg and Jewish holocaust)
World War One - Five Trillion
Destroying the Catholic Church and Christianity - Three trillion
Removing God from social consciousness and public discourse - Five trillion
Destroying millions of lives through feminism (marriage and family destruction)  - Three trillion
The war on masculinity and feminity which has damaged heterosexuals and robbed the world of masculine virtue and feminine charm. One trillion.
Mass murders by Bolsheviks and Chinese Communists - Five trillion
General depredations of Communism - One trillion
The Cold War and other wars of the twentieth century - Korea, Vietnam, Iraq, Afghanistan, Syria. Libya   -  Five trillion
The Great Depression, the Credit Crunch and the #scamdeminc of 2020 --  Five Trillion
The assassination of JFK, MLK, RFK and 9-11  - Two trillion
Wars previous to the twentieth century- i.e. US Civil War, etc. Two trillion
Attempt to start a race war in America -  300 Billion
Destruction of the democratic process, journalism, education and the arts -  five trillion
Damage to national cultures and identities caused by multi-culturalism and illegal migration  -- One trillion
The Rothschilds will finance and distribute ten honest movies about Communist subversion and espionage in America,
as well as ten movies extolling American patriots like Louis McFadden, Charles Coughlin, Charles Lindbergh, and Henry Ford.
Airports and public places named after Illuminati traitors like G.H.W. Bush will be renamed.
YOUR SUGGESTION HERE
TOTAL: ABOUT 50 TRILLION
ARE WE CHARGING ENOUGH?
The Rothschilds may discharge this debt by forgiving all "debt" due to money creation and relinquishing ownership of central banks to national governments. This is letting them off easy, but the return to national sovereignty, personal freedom, and truth is worth the price.
---------------
First Comment from JPW-
JPW: Henry at the forefront! We gladly follow. How about (i'm including their partners-in-crime, the Rockefellers, the Jesuits and Vatican, last not least by a long shot: the Black Nobility and Templars):
Suppression of economies with communism 250 trillion (before China and Russia became Fascist)
Suppression of free Tesla power technologies conspiracy 100 trillion Monopolist practices in Banking 75 trillion
Monopolist practices in energy 50 trillion Chemtrails and EMF weather manipulation (droughts) and man-made earthquakes 40 trillion Covid-19 world-wide economic damage conspiracy 30 trillion Medical murder and suppression of life-saving treatments conspiracy 25 trillion
Fluoridation of commercial water conspiracy 20 trillion International drug trade (including Opioids) and abusive drug laws conspiracy 15 trillion
Sucrose, aspartame anti-health conspiracy 10 trillion GMO, Round-up and Agent Orange conspiracy 7.5 trillion
Damage from Electro-Magnetic-Frequencies, such as cell towers & phones,WiFi, 5 tril. Colonialism, Boer war 2.5 trillion Theft of Portuguese colonies 1 trillion
Murder by starvation of over a million German war prisoners after the end of the war: 0.5 trillion Murder and displacement of 2 million Palestinians from their Homes 0.5 trillion
Napoleon's murderous war rampage 0.5 trillion
Stock market swindle after the battle of Waterloo 0.5 trillion French Revolution 0.5 trillion
These add-up to: 633.5 trillion plus your 50 trillion = 685.5 trillion
A nice reparations fund, divided by 7.5 billion = say 90,000 per earth inhabitant...
SE wrote-
They stole my dreams and efforts so that also applies to everyone else. They destroyed my son. 50 trillion is only 10% of their wealth. We take it all and put them in glass cages in the center of every major city. Their relatives and henchman too. No ceiling for their glass cage so we can catapult flaming bags of excrement over the glass walls.

How about (i'm including their partners-in-crime, the Rockefellers, the Jesuits and Vatican, last not least by a long shot: the Black Nobility and Templars):

bastards ... im watching a classic Aussie lecture from Jeremy Lee in Brisbane in the 90's detailing the 20th century federal banks take over history ... I had no idea the scope of our loss was so staggering. excellent lecture, people need to learn this!
https://www.bitchute.com/video/YZVR6JPrhHc2/

Print our own money and be done with them—the glass cage model with bags of fiery excrement being thrown into it (from the comment above) sounds just right.

Then go about restoring history and civilizations they have destroyed—while we re-invent government to a highly pared down sleeker, simpler model that gets the job done for everyone—all time, for all generations:

If we build consensus on it, we’ll be able to get it done.

Why not—even at this late hour.

No, Rothschilds do not owe a cent on this one. They have not, and can not, destroy the Church!

The Catholic Church is indestructible; it will remain till the end of the world, for we have Jesus Christ's word for it. “The gates of hell shall not prevail against it." The archangel Gabriel announced to Mary: “Of His kingdom there shall be no end”. "The Church,” says St. Ambrose, “is like the moon; it may wane, but never be destroyed; it may be darkened, but it can never disappear.” “The bark of the Church,” says St. Anselm, “may be swept by the waves, but it can never sink because Christ is there.”

I’ve read a lot of brilliant columns on here, but this, Henry, is one of your most brilliant yet.

While the rest of the conservatives are wildly flailing at nameless Communism, you are landing uppercuts to the jaw of the malevolent bankers behind it.

n the reparations act Henry please list the theft caused by the Federal Reserve's usuary crime aka RICO violation. Woodrow Wilson and all his heirs should have their assets seized as well.

Rothchild is the head of the snake we must not forget that he represents the 13 bloodline
families who are all involved in this, also their willing servants ie the bankers, lawyers, etc
they are responsible for completely destroying the bonds between mankind and the natural
world all to satisfy their greed.

to tally their debt in monetary terms cheapens the atrocities committed against we the people, they absolutely destroyed the spirit of the German people with their lies and deceit
just as one example.

they must lose everything along with their cohorts, then after the trials and the destruction
of the Zionist movement very public executions.
keep up spreading the message Henry and all the best.