Where Do We Draw the Line? At Wearing Masks or Taking Vaccines? 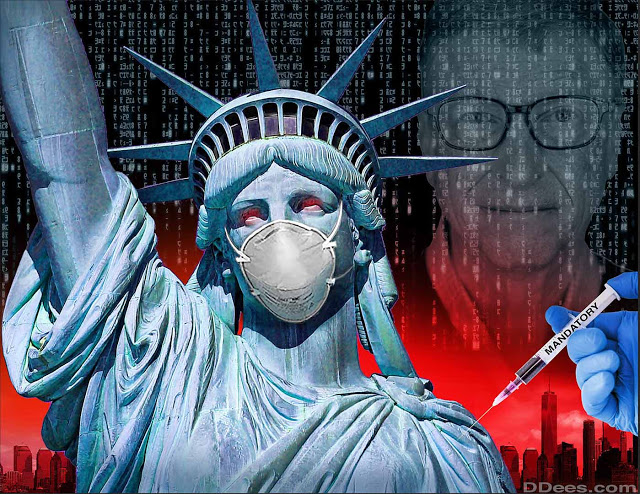 (courtesy, snippets & snappets)
You don't have to be a rocket scientist
to see that we are headed to
a Chinese Communist-style
social credit system based
on receiving a COVID vaccination.
We need to reject the mask now.
This is a test. If we accept masks, they'll
know we will accept mandatory vaccines.
We need to start organizations in every state and province to offer moral, legal and financial support to courageous people willing to say,  "the emperor has no clothes."  This is for real folks. It's happening and it won't go away unless we act.
by Henry Makow PhD
A friend in Ottawa tells me that gas stations are fined if a customer drives up to the pump not wearing a mask.
That's right, both the customer and the gas station receive a fine, the latter presumably for serving someone without a mask. This is the future folks, except it is happening now: No participation in society without compliance.
It's time to stop this creeping Communism by defying the bullshit mask law en masse.
The relief cheques and bailouts, the promise of recovery are all designed to stifle dissent. The bottom line is that this nonsense is the new normal and the sooner we resist it, the better.
Bill Gates:
"Eventually, what we'll have to have is certificates of who's a recovered person, who's a vaccinated person, because you don't want people moving around the world, where you have some countries that won't have a control sadly."
What kind of "certificates"?
What he actually has in mind may be revealed in a report of this past December that the Bill and Melinda Gates Foundation was funding research at MIT in the development of a "Tattoo ID", to be injected with vaccinations and available for anonymous detection. In time, the failure to have the appropriate identifying tattoo for any given year, and for any given virus officially declared dangerous, would most certainly be used to control individual freedom of movement. This should trigger every thinking person's attention, particularly as it is reported that Gates refused to have his own children vaccinated.
https://dissidentvoice.org/2020/04/what-does-the-bill-and-melinda-gates-foundation-want/ 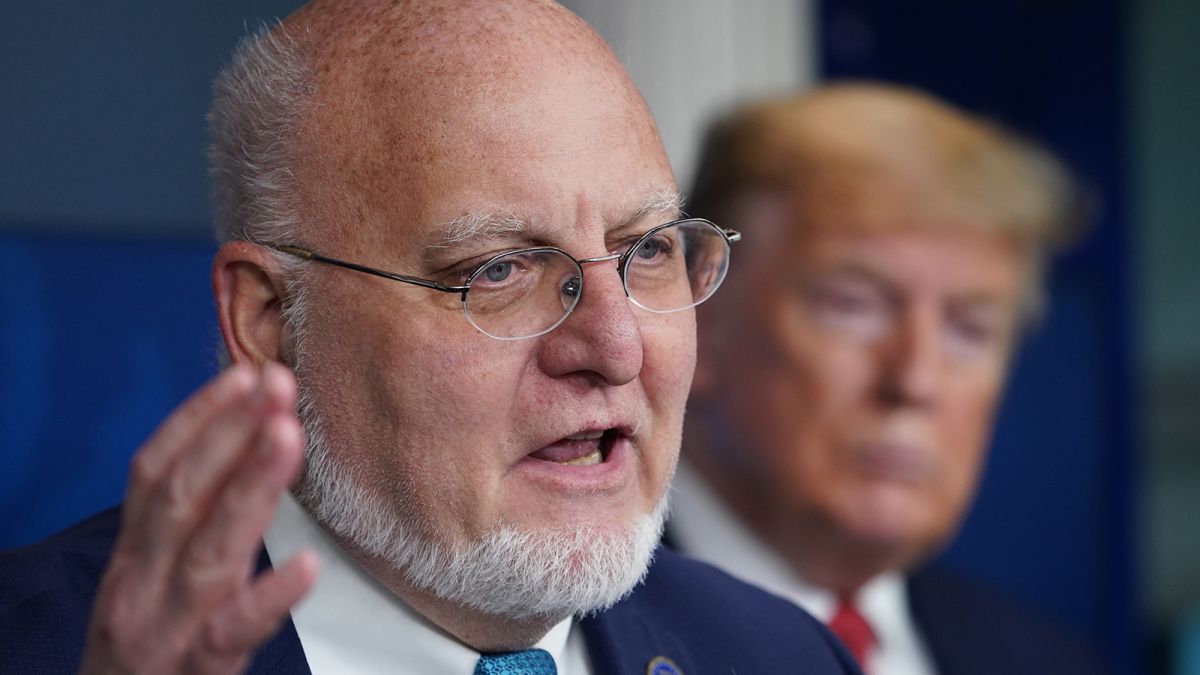 Last week, the CDC Director, Robert Redfield, left, predicted a "double hit" this fall.
"I'd like to continue to work with you to get the American public to embrace the influenza vaccine so we can try to minimize the impact of influenza because I think those two respiratory pathogens hitting us at the same time do have the potential to stress our health system."
In Gary Barnett's opinion, "these are not simply prognostications, but are warnings of things already planned and known. What the CDC head is indicating with his comments is that he knows that the flu season coming will be much more devastating than normal and that all sickness and death will be blamed on a virus that has never been properly scientifically isolated, identified, or verified.
"That will matter not, as, after 8 months of mandated isolation and lockdowns, deadly oxygen-stealing mask-wearing, of vitamin deficiencies, lack of exercise, job loss, depression, and extreme stress, the entire population will be at great risk of becoming sick, and the evil controllers of this fraud that plotted this outcome from the beginning, will use the purposely created weakness of the masses to advance their agendas of control.
"This coming flu season will not be like last year when total deaths were close to normal, even with the introduction of a fraudulent virus.
"This next flu season will see not only the old and infirmed getting sick and dying, but people of all ages will be highly affected due to deliberately introduced lockdown measures implemented by the elite controllers. 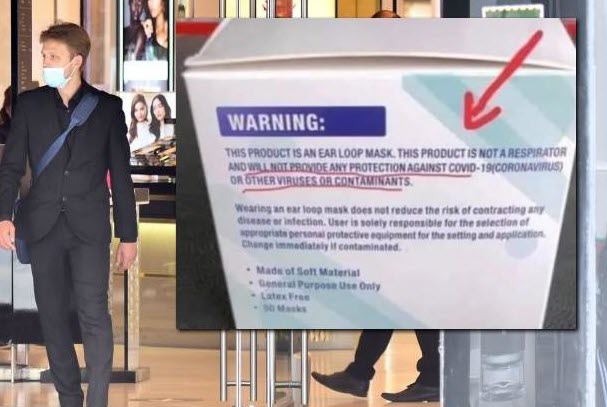 Meanwhile in Africa, "Testing will soon begin in poverty-stricken parts of Africa for a biometric ID which will also be your payment system and vaccine record. The biometric digital identity platform that "evolves just as you evolve" is backed by none other than the Bill Gates-backed GAVI vaccine alliance, Mastercard, and the AI-powered "identity authentication" company, Trust Stamp."
Am I the only one who watches pre-scamdemic movies with a sense of nostalgia?
We need to take a stand on mandatory masks. If we don't, they'll know they can impose mandatory vaccines.
Related-Bill Gates Threatens the World with PANDEMIC 2
--Masks have nothing to do with health:
'We had been told by various sources [that the] WHO committee reviewing the evidence had not backed masks but they recommended them due to political lobbying.'
--- Are AntiMask Masks Legal?
--21 States have made masks mandatory but Trump says there will be no federal mandate
---The Government has no Authority to Enforce Wearing of Facemasks
---Why Facemasks Don't Work (Ben Swann)
First Comment from Andrew
We are taught to believe that America is a democracy where we are protected by a constitution and a bill of rights, but that hasn't been true for a long time. The serious loss of our constitutional rights began after 9/11 with the Patriot Act and the formation of the Department of Homeland Security (DHS), but 99% of America didn't notice.
Frank Zappa in 1980s predicted this loss when he noted, "The illusion of freedom will continue as long as it's profitable to continue the illusion. At the point where the illusion becomes too expensive to maintain, they will just take down the scenery, they will pull back the curtains, they will move the tables and chairs out of the way and you will see the brick wall at the back of the theater."
With the COVID-19 deception a few Americans can see Zappa's "brick wall." Now we have an oxymoronic TOTALITARIAN DEMOCRACY in place of a constitution and a bill of rights. When I tried to talk to the best US Constitutional scholar about how to proceed legally, I learned from the scholar that he was too terrified of COVID-19 to discuss anything but complete submission. "It's for our own good." He even got angry when I wouldn't share his fear. We're not speaking.
Looks to me the COVID-19 deception was the perfect way to show us all the "brick wall."
Doug P
I got up this morning, noticed I was out of coffee cream. I couldn't go to the store next to my place because you have to wear a mask. I thought those people were Christians and I considered them friends. In reality, they are nothing more than creatures of comfort who's highest value is not to be in trouble. Hang on to those granite countertops and big screen tvs for dear life.
So I walk down to the other store a few blocks away - closed. So I go into Tim Hortons. I walk in maskless, I'm the only one in there. I walk up to get a coffee, no issues. I turn around to leave, coffee in hand. I'm leaving through the wrong exit. They all start screaming - maybe eight or ten of them. I yell back "Look - there is no one in here". "It doesn't matter", "grow up". My response "You people are all going to line up to be shot one day", "You don't know what Bolshevism is". They told me if I don't exit from the right door, I can't come back. So what. Being a man is more important than drinking a Timmies in the morning.
Are these people worth trying to save? Can it be done? Is a person without principle other than comfort-seeking alive? Does a person with no agency count as being alive? Certainly, under Roman law they have no rights because right comes from agency in Roman law. If you have no agency, you have no rights and no right to even live, you are the lowest of slaves. Our lack of agency is making us a society of assholes. Non-assholes will not go silently into the good night.
See my "Assholes & Bullshit: A Language Problem"

Comments for " Where Do We Draw the Line? At Wearing Masks or Taking Vaccines? "

Believe me, this "reset" has much to do with no longer needing many human beings to manufacture products. They know that just putting everyone out of work by using robots will eventually lead to a determined mass revolt against their damned technology as they will always refuse to give each family a necessary guaranteed income, so the whole system at the top is aimed at KILLING OFF BETWEEN 85% TO 95% OF THE WORLD POPULATION, according to which of these totally insane satanists one reads. With robotic technology they no longer need 28,000 slaves each (or whatever the number was) they can keep their soft lives going with far less human involvement. Which they deem a great advance for themselves.

--I am surrounded by a sea of masks. If people would watch this ten-minute video of a press conference of the coronavirus task force, and if they aren't too brainwashed, they might see this for the scam it is.

https://www.bitchute.com/video/RUNFaSTiVXXC/
Notice how Birx talks out of both sides of her mouth. It is an acquired art--makes your head spin and it puts the listener at a disadvantage as he/she tries to parse out what she is saying. She is an accomplished dissembler and then some. And Fauci ("Jaws"--the actual translation of his name from Italian) just can't hide his duper's delight. And it's us he's laughing at.

As for the numbers of corona exploding: The CDC just told us that having had the COMMON COLD could make you test positive on the covid-19 testing they are pushing like crazy.
Keep it up--

Only a legislature can make law, not a governor. Businesses must also give fair and equal access to both mask wearers and non-mask wearers, it’s called nondiscrimination.

Peggy Hall has it all covered at thehealthyamerican.org. Local is everything, plus there is power in numbers. Since everybody hates a confrontation at the supermarket or other business, stores are being contacted to arrange for MASK FREE hours of operation. That also includes employees not wishing to wear them. There are both medical and personal reasons for this.

A mask is nothing less than a psychological muzzle, and the so-called “mandates” are an affront to every full-grown adult capable of making a decision about their own vestiture.

We'll find out how many people in the state of California are going to go along with the governor's new lockdown orders. My guess is that it won't go too well for the governor at all.

This has got to be the most senseless waste of time and money I can think of in modern history. Their master plan of making the world an unproductive wasteland of idle people living out of a computer screen under home confinement will never work.

My guess is that China and Russia won't be playing this game too much longer and that's when this plan for a World Vaccine Republic run by the CDC and WHO will fall apart. It won't be long.